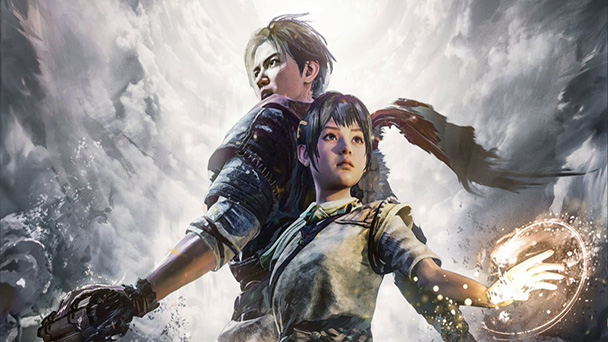 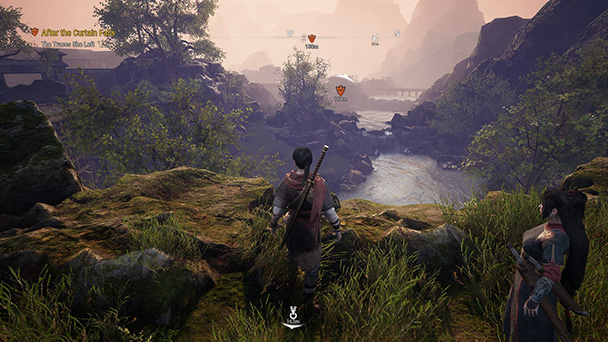 Gaming is moving in several worrisome directions. The ubiquity of DLC is leading to rather barebones base games, goading gamers into purchasing additional substance in piecemeal form. ‘Games as a Service’ is becoming an increasingly prevalent approach. But servers are shutdown as soon as revenue drops, quashing any hopes for longevity. Seemingly, the major publishers have ‘moneyballed’ design, resulting in lackluster remasters, perpetual sequels, and a plethora of homogenous efforts.

But the growth of internationally developed games is a harbinger of hope. The uptick in transcontinental publishing is giving Western players access to titles like Xuan Yuan 7, developed by Taiwan-based DOMO Studio. Although the Xuan Yuan Sword games date all the way back to 1990, this is the first time that stateside players have been privy to the role-playing series. Likely, you’ll wish the series had arrived sooner. 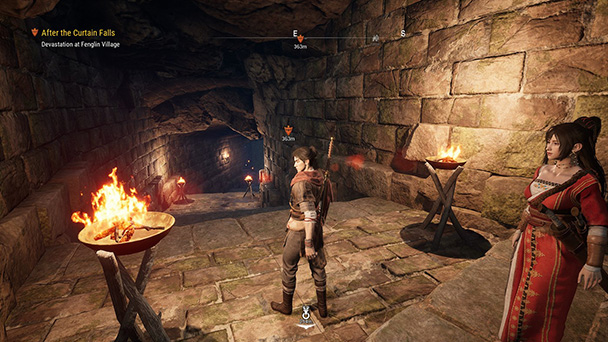 A Timeless Tale Rooted in Tradition

Mechanically, Xuan Yuan 7 offers scant innovation. Its combat feels built from fragments least several different action games, while the game’s linear trek through picturesque environments might recall the Uncharted franchise. But Xuan Yuan’s prose and pace is all its own.

It’s a routinely soothing game, whether the lead character gathers in front of gleaming campfire, a quaint Chinese village circa 6 AD, or treks across a flora-filled path. Even better, EastAsiaSoft’s localization captures the poetic properties of Mandarin. From piety expressed with communicating with elders and superiors to a deliberate elusiveness when discussing sensitive subjects, there’s a lyrical quality you won’t find in most RPGs. Arguably, the most comforting component is the game’s soundtrack. Combining traditional instruments like the dizi (Chinese flute) and guzheng (a plucked zither) with modern orchestral arrangements, it’s thoroughly captivating. 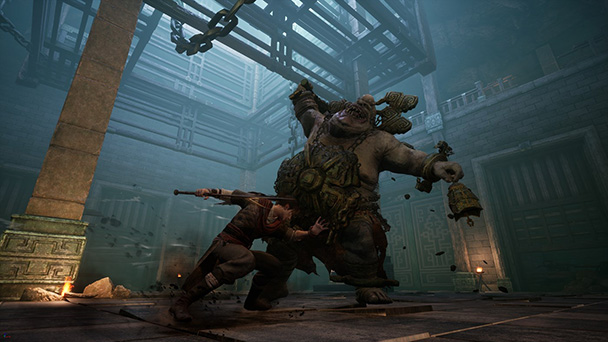 Xuan Yuan 7’s other distinction is rooted in its storyline, which shirks the traditional world-saving motivations. We first meet protagonist Taishi Zhao as a young boy, doting on his infant sister Xiang and offering her a gentle lullaby. But slumber is interrupted by a group of agitated voices outside. Sensing danger, Zhao’s parents give him a scroll and tell him to flee with his sister. As he escapes through the ransacked village, he hears the sound of his parents’ murder.

About a decade later, we meet Zhao again. Exiting adolescence, he now flaunts a young warrior’s build. Some of his physique was undoubtedly honed by shouldering odd jobs, undertaken to purchase medicine for his ailing sister. Zhao’s latest assignment is to escort a troop through a dense forest dotted with unidentifiable matter. All goes well until the group is besieged by malevolent-looking creatures hellbent on killing the adventuring party. 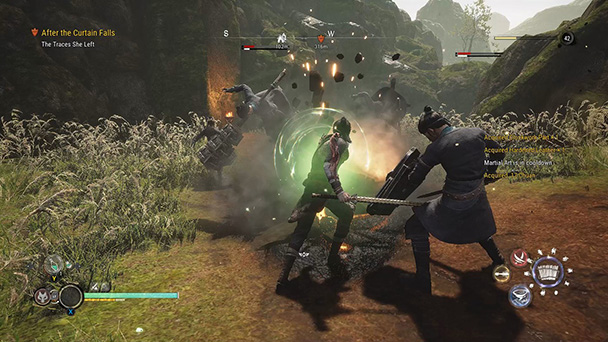 A Protagonist Who Isn’t a Brat

When Zhao returns, one of the adversaries grabs Xiang, wounding his sister. To keep her from being instantly killed in the ensuing crossfire, Zhao invokes the ability of the scroll, creating an opening to another realm. By leaping through, Zhao escapes, and temporarily transfers his sister’s soul to wooden doll. Much of Xuan Yuan Sword 7’s playtime revolves around getting her soul back into her body.

Occasionally, the game’s narrative explores larger issues. But at its core, it’s an emotional tale that’s focused on the devotion of family bonds. The plotline is effective because it’s rooted in the traditions of the Hero’s Journey, merging historical figures and mythology. While there’s not much curvature to Zhao’s character arc, he’s likable protagonist who eludes the obstinate early stage faced by many modern leads. Sporadically, side quests disclose different faucets of life, like the sense of loss faced by a newly orphaned child. But largely, Xuan Yuan 7’s themes of determination and loyalty endow the adventure with a traditional vibe. 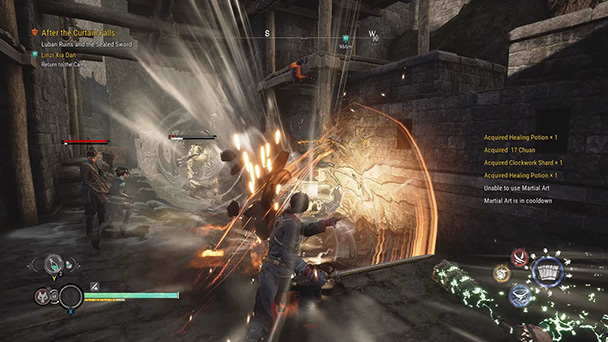 The Fury of a Bear or the Speed of a Wolf?

Instead of witnessing Zhao’s emotional growth, players are privy to seeing his physical development. Like many action role-playing games, you’ll start with a sparse set of maneuvers that gradually grow in number. Initially, positioning is crucial, as you deliver short combos with a sword and shield or with your fists. The latter is a surprisingly worthwhile approach, with a tendency to stun enemies. The sole blemish is the lack of enemy variety across Xuan Yuan’s early game and an affinity for horde attacks later on.

As with most ARPGs, subordinate foes are fodder for the game’s more challenging boss battles. While some of these momentarily break the game’s tolerant approach, at least there’s a satisfying set of rewards. Earning new martial arts skills (each named after a different animal) help round out your arsenal. From the Bear stance that can inflict massive damage to adversaries directly in front of you to the Wolf style’s handling of hordes, each nurtures a particular play style. What’s especially gratifying is that the more often Zhao uses a particular stance, the stronger it becomes.

Fortunately, these aren’t the only perks to be discovered. You can build workshops in the alternative realm to upgrade your gear. Enemy souls can be captured, upgraded, and assigned to party members, offering bonuses like elemental resistances and stat augmentation. While Xuan Yuan 7 is a largely linear affair, these optional pursuits offer an engaging opportunity for players who appreciate maximizing their capabilities. Additional autonomy is extended by the game’s half-dozen puzzles. They’re crafty conundrums but thankfully DOMO Studio offers a way to skip them. 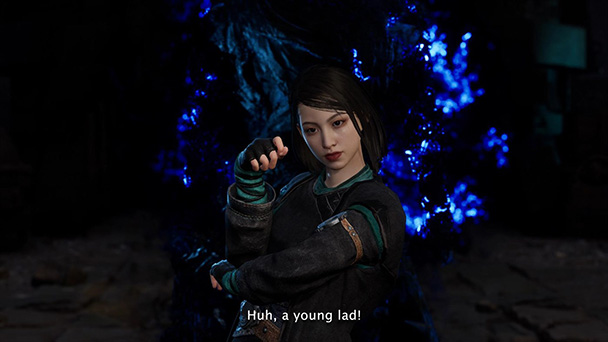 Given the franchise’s long legacy, it’s not surprising that Xuan Yuan Sword 7 can feel like a game from a bygone era. While some might not appreciate the game’s guided approach, players won’t have to struggle with disorientation. Save for the location of two crafting ingredients, the path toward forward progress is reliably evident. But ironically, Xuan Yuan 7 also feels fresh. While many elements might seem familiar to RPG aficionados, they’re filtered through a cultural lens that provides distinction. While there’s plenty of reasons to worry about the future of the game industry, seeing more localizations likes this offers a glimmer of hope.

Xuan Yuan Sword 7 was played on Xbox Series X
with review code provided by the publisher.

Summary : Like MagnaCarta 2 demonstrated in 2009, the West desperately needs more East Asian RPGs. Much of Xuan Yuan Sword 7’s play will feel familiar, but its plot is filtered through a distinct cultural perspective, making the adventure feel fresh.