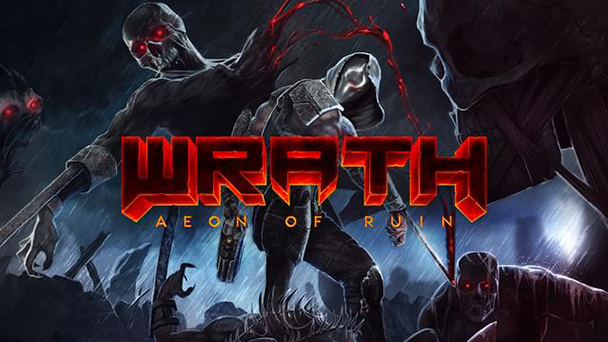 Popularized in the early nineties, first-person shooters have enjoyed an immense technological evolution. Visual developments, spearheaded by titles like 2007’s Crysis have led to environments routinely rendered in rich detail. Well-tuned netcode has made it possible for a dozen or more players to compete in fast-paced deathmatches in franchises like Call of Duty. But a focus on setting or multiplayer skirmishes means that most modern FPSs have abandoned many of the qualities that were once fundamental to the genre.

Revisit games like Doom, Quake, Heretic, and Hexen and you might be reminded of the glory of skeletal storylines, adrenaline-inducing intensity, and an unabashed arrogance toward anyone who hasn’t mastered “WASD” navigational skills. Alternatively, you could load up Wrath: Aeon of Ruin. 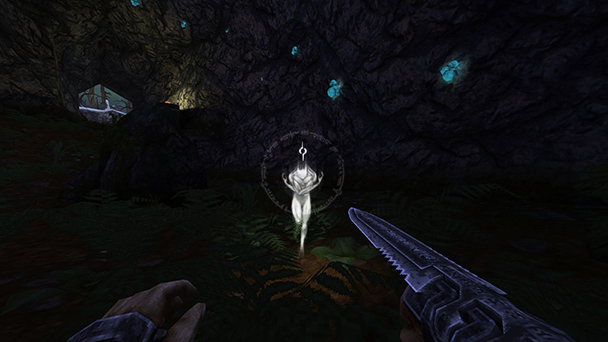 Was “Ruin: Wrath of Aeon” a Possible Title?

Forgettable moniker aside, Aeon of Ruin is a thoroughly engaging reminder of speed and the player-coddling of auto-mapping. As soon as you’re let loose in the game’s spacious hub-world, you’ll probably appreciate the running speed. Save for the recent re-imagining of Doom, most first-person shooters have slowed down the protagonist’s pace. Wrath shakes off the shackles, with the kind of swiftness usually saved for depicting cars racing across tarmac. Sprinting up the game’s spiral staircases feels quick; with seconds separating you from nearly any visible area.

Jumping might lack much verticality, but a right mouse-button charge of your Ruination Blade provides a bit of lift when aiming skyward. It’s Wrath’s standard issue arm, used only when your other weapons have used all their ammo or your feeling confident. As you descend into the game’s sub-worlds, you’ll progressively pick up tried-and-true firearms like pistols, shotguns. While the game’s version of chaingun fires fangs and the grenade launcher arcs bright green, gooey cysts, function feels familiar, and alternate use mostly adjusts firing rates. While your arsenal can pack a punch, it also lacks distinction. 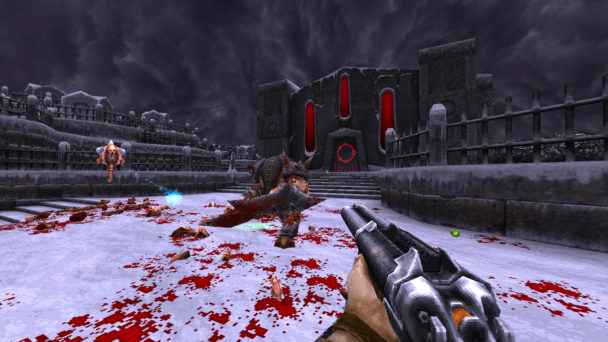 Like the early days of first-person shooters, expect most unintelligent opposition. Sure, you’re occasionally overwhelmed by a finite number of creatures (with statistics kept via your in-game journal). But venture cautiously through new areas if you’re playing Wrath’s higher difficulties. A careful approach lets you shoot adversaries that can’t turn a corner or have any idea how stairs work. Fortunately, things aren’t too easy, as enemies tend to materialize right in front of you. When groups of tougher foes like the demon-headed Heretic make a beeline for you, things can get tense. Fortunately, there’s an ample supply of heath rejuvenating vials and bottles, as well as armor laying about.

When the masses do gang up on you, found artifacts can provide perks like regenerating health every time a foe is turned into gibs or even exchanging heath for invincibility. Once equipped in the menu, they can be activated/de-active with a button press, making them essential against fights with multiple tougher foes. The other assistance Wrath provides are collectable Soul Tethers. Once found, these extend the ability to quick-save in any location. 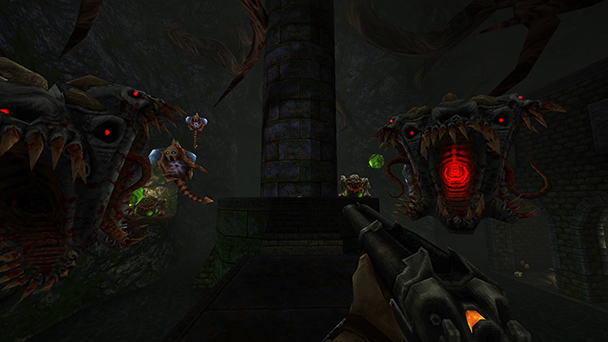 Unlike contemporary shooters that push players down linear paths or offer to display a map, Aeon of Ruin forces players to learn the environment. There’s a wealth of texture reuse, you’ll see a lot of grey bricked dungeon walls and basic structures with keyed or gated access methods. As such, players are forced to pay attention to their surrounds or at least look for a path from the trail of slain enemies and broken urns. This requirement forces you to think about the layout while you are laying down fire, which elevates the level of intensity.

In its current Early Access state, Wrath: Aeon of Ruin level designs demonstrate skillfulness. Claustrophobic corridors ratchet up the tension of firefights, while foes take pot shots from elevated ledges in more open areas. Naturally, there’s a host of collectables that linger just out of reach until players find the proper stairwell or switch that grants access. Running on a modified and modernized version of the original Quake engine, amenities like remote draw distances and support for ultra-wide monitors ensure that Wrath doesn’t feel like a relic. Sure, there’s evident pixelization on weapons or when you adjacent to a wall, but Wrath is a bit too attractive to pass for a for a lost nineties-era FPS. 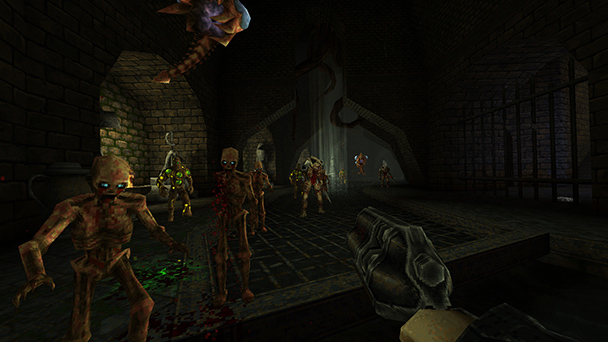 Currently, Wrath: Aeon of Ruin has most of the fundamentals of solid first-person action down. An adversary-free hub world and two areas reveal a gratifying sense of plater speed, an acceptable arsenal, and enough enemy variety to signal some serious potential. But undoubtedly the game has a wealth of work to accomplish before it feels complete. Due for release episodically, you’ll probably want to wait for the release of the first installment unless you’re absolutely fervent for a retro first-person shooter.

Wrath: Aeon of Ruin was played on PC with Early Access code provided by the publisher.