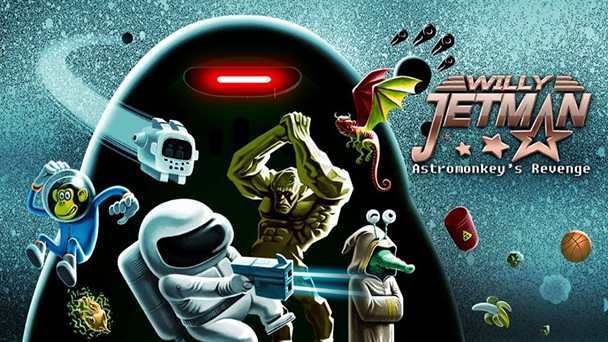 Custodian of the Cosmos

Often, games catapult us to prestigious societal ranks. Whether we’re tearing across asphalt in exotic sportscars or stepping into the luxurious loafers of a Yakuza boss, our recreations often allow us to live out high-class fantasies. But not’s the case with Willy Jetman: Astromonkey’s Revenge. Barcelona-based Last Chicken Game’s inaugural title places players in the role of a hardworking space janitor.

Certainly, Willy hasn’t had the easiest life. Years of menial work were fueled by daydreams of interstellar travel. After eventually landing a position as intergalactic custodian, his AI-piloted ship crash lands on a hostile planet named Gravos. But things are starting to look up when he gathers enough resources to purchase a machine gun from an isolated vending machine. 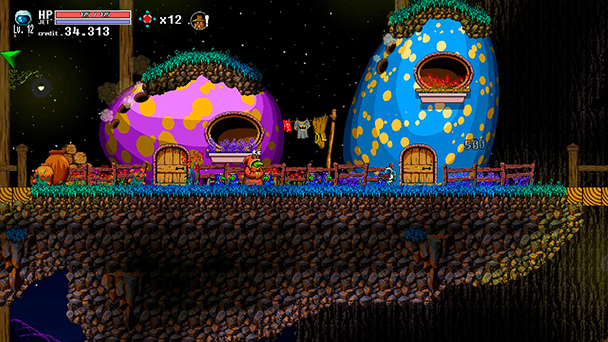 Progress across Astromonkey’s Revenge is made in two ways. The first involves picking up scattered pieces of debris and taking them to recycling kiosks for a bit of cash. Pay can also be earned by defeating Gravos’ enemies. These come in two types: more threatening adversaries that disappear when defeated and subordinate that tend to travel in groups and repeatedly respawn. Save enough coin, and you’ll eventually be able to afford new weapons or upgrades.

Agreeably, the game employs Metroidvania-style structure to portray Willy’s journey. Advancing into new areas steadily builds an in-game map, with handy highlighting of recycling centers and save points. But Gravos’ muted gravity means you won’t always be hugging the ground like a member of the Belmont family or Samus Aran. A button sends Willy leaping and an optional pull of the right trigger sends him soaring skyward, his jet pack emitting a vapor trail. Agreeably, our hero doesn’t have to worry about fuel and after a few seconds of staying on the ground, the device recharges. And if you’re able to find capsules littered around the planet, his jetpack range will be extended. 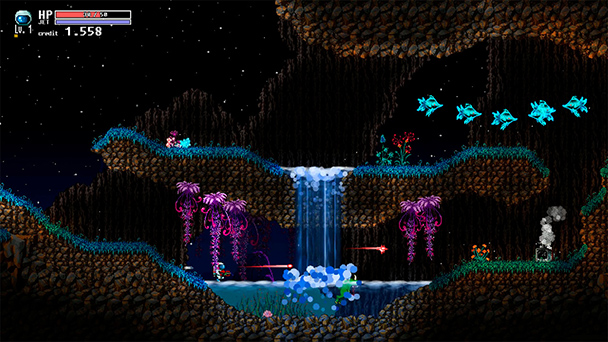 Gravity is a Persistent Rival

Like many games that push players downward, you’ll have to get use to gravity. Aligning your horizontal traveling projectiles can be challenging at first, as its almost impossible to hover in place. Difficulty also stems from the amount of damage adversaries can inflict. All too often, a few projectiles or even quick contact with an opponent returns Willy to the last save point. Survival on Gravos is testing, and persistence will teach you how to handle the game’s creative bosses and lethal elements.  Although the game’s controls typically feel spot-on, decisions like using different buttons picking up and releasing recyclables can be irksome, especially since inputs can’t be remapped.

Fortunately, Willy’s arsenal allows for plenty of resistance. Beyond your trusty machine gun, you’ll acquire weapons like a flamethrower, mine launcher, an even a shuriken gun. While Astromonkey’s Revenge pushes players toward strategizing, favoring specific firearms against certain enemy types, intermittently the balance seems broken. Once you’ve acquired the throwing star-tossing weapon, there’s little incentive to use anything else, because its unmistakably overpowered. 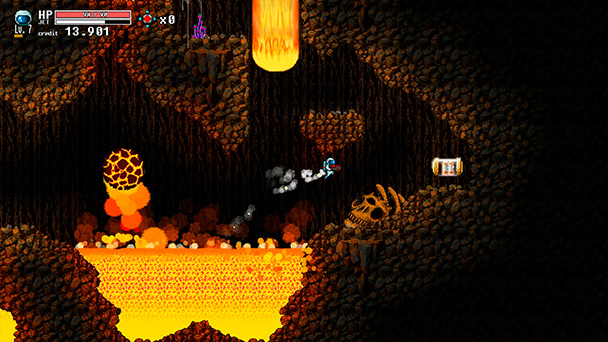 Despite several small blemishes, Astromonkey’s Revenge offers an engaging expedition that refuses to pad its length. Like the better entries in the action-adventure genre, there’s motivation to push forward, whether it’s the change to use a giant bolder to squash enemies or the thrill of finding hidden passages filled with resources. While some might bemoan the linearity of the adventure, it’s gratifying to not just follow waypoints or become disoriented in a labyrinthine environment.

On PC and Switch, the game runs fluidity, with a visual style reminiscent of those delightful Euro-born titles of the 16-bit era. But this isn’t just a retreat of Super Turrican or Doom Troopers. Although Astromonkey’s Revenge uses detailed sprites to depict the action, there’s a wealth of small visual details that elevates the action. From shooting stars in the backdrop to battles where projectiles and explosions fill the screen, the title offers modest graphical delights. Sonically, the action is complimented by the kind of plucky chiptune soundtrack that solidifies the game’s nostalgic charms. 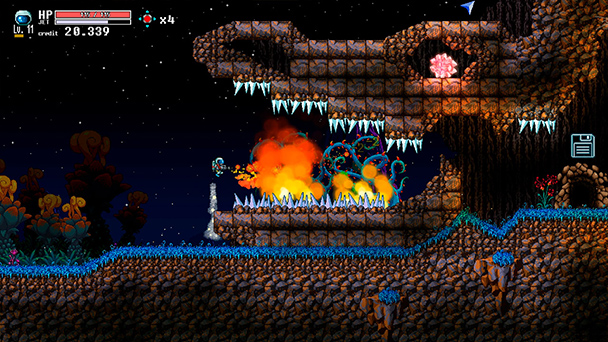 Willy Jetman: Astromonkey’s Revenge was played on PC
and Switch. PC review code was supplied by the publisher.

Summary : While Willy Jetman: Astromonkey's Revenge isn't perfect, it shows that a Metroidvania can be lifted by the incorporation of a jet pack and a few guns.