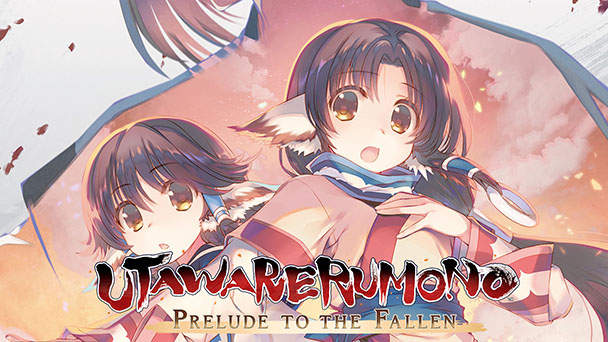 Utawarerumono: Prelude to the Fallen is a remake of the original 2002 game. Despite laying the groundwork for two sequels and a spin-off game, the first entry hasn’t arrived on Steam until now. If you’re new to the Utawarerumono series, this is the best place to dive in. 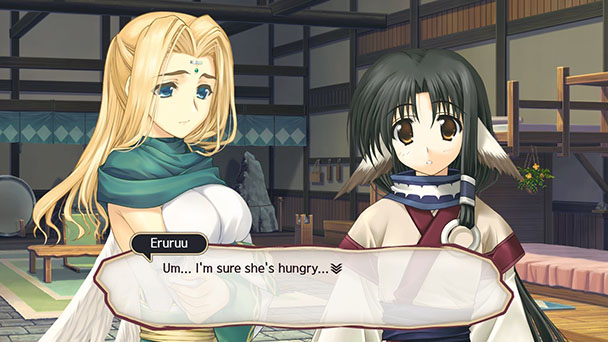 As stateside gamers, we’re occasionally tossed in the middle of a franchise. Take 2006’s The Legend of Heroes II: Prophecy of the Moonlight Witch, the first entry in Nihon-Falcom’s franchise to make it to the West, paving the way for the Trails in the Sky and Trails of Cold Steel arcs. For Japanese players, it was the third game in the series, revisiting themes and locations from precursors. Likewise, localization didn’t happen for Fire Emblem until the seven titles in (with the 2003 Game Boy Advance title serving as a prequel for Japan-only The Binding Blade).

Likewise, when Shiravune (formally ShiraVN) released Utawarerumono: Mask of Deception and Utawarerumono: Mask of Truth for PC last year, these were the second and third games in the series. Leaf’s original eroge debuted in 2002 and while Sting ported the game to other platforms, none of these would arrive stateside until last May. 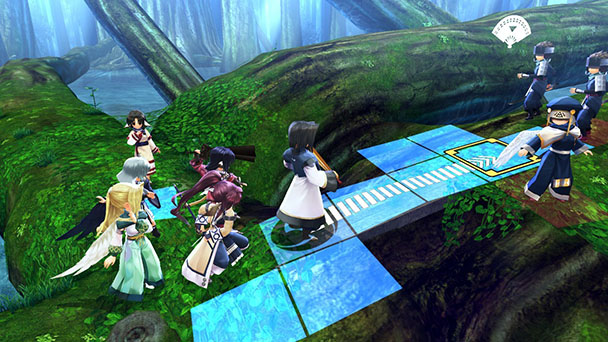 Until the recent PlayStation 4 release, fans were forced to seek out OLM’s 26-episode anime, Aquaplus’ two-volume manga, or possibly, an inelegant fan translation to witness the original plotline. With the release of Utawarerumono: Prelude to the Fallen for the PC, the inaugural series entry finally becomes available to PC owners. It’s a welcome addition to Steam, as the title makes an ideal entry point for the franchise’s fascinating world and likable characters.

Mercifully, this isn’t just a quick-and-dirty port of the 19-year old Utawarerumono. Instead, Leaf followed the example set by Ryu ga Gotoku Studio’ Yakuza Kiwami games. Content wise, Utawarerumono’s blend of visual-novel style storytelling and grid-based strategy remains mostly untouched. But aesthetically, the original 2D sprites have been replaced with the polygonal, animated style exhibited by Mask of Deception and Mask of Truth’s characters. Combat has been refined to incorporate the quality-of-life improvements of the sequels. Lastly, there’s new exposition as well as voice acting that were added to Sting’s ports. 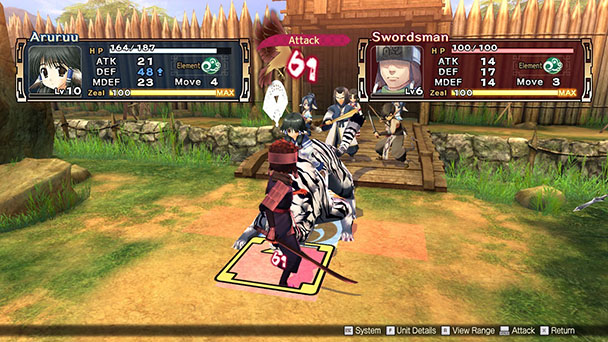 Before truly delving into the game’s turn-based battles, you’ll enjoy a satisfying but lengthy setup. The game opens in the rustic village of Yamayura, where everyone seems to have tails and animal-like ears. Eruruu returns from the forest with a young man who is on the brink of death. In the ensuing weeks, Eruruu and her grandmother demonstrate pastoral virtue, nursing the masked stranger back to health. Stricken with amnesia, the man doesn’t know his name, and is christened, “Hakuowlo” by the matriarch.

Where Dumas, Kemonomimi, and Sci-Fi Converge

What begins as a quaint retreat into rural slice-of-life soon reveals some thematic changes. When the locals experience agricultural troubles, Hakuowlo is able to come to their aid, earning gratitude from the villagefolk. But an abundant harvest draws the attention of a neighboring lord, and troops are sent in to seize the provisions. Although Utawarerumono could have easily confined its storyline to depicting the joys of life in Yamayura, the game’s aspirations are much grander. Gradually, conflict intensifies, and just when you think that a reflection of war is Leaf’s ultimate goal, fantasy and even science fiction constituents are woven in. Yes, it’s an exceedingly ambitious storyline that largely makes good on its visions, save for a slightly insipid midsection.

But despite this issue, Prelude to the Fallen should be considered the franchise’s ideal entry point. Western players who journeyed through Mask of Deception and Mask of Truth will know certain things that will spoil Fallen’s narrative. Fortunately, it’s not a total deal-breaker. Although several reveals are compromised, you’re still likely to feel the emotional impact. 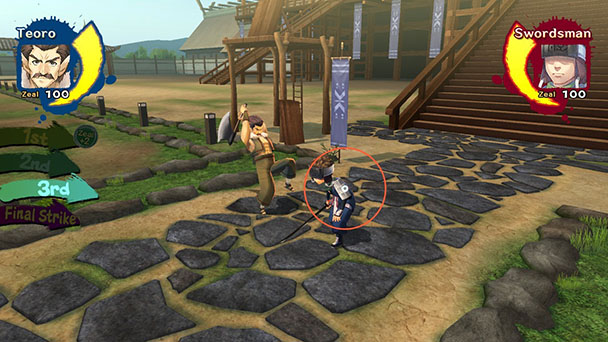 For those approaching Utawarerumono for the first time, prepare to be entranced by the lore. Sure, it’s widely known that the franchise’s lore was inspired by Ainu, the indigenous culture native to northern Japan. With Prelude to the Fallen, players are made to identify with Hakuowlo, the outsider who comes to live in the village. Initially, there’s a sense of wonder about the world, fostered by names that diverge from traditional Japanese ones and cultural habits rooted in the agrarian.  But across the game’s 25+ hour trek, the sense of peculiarity gradually ebbs away, replaced by a mutual empathy. The ‘fish out of water’ often feels like a cliched hook, but here it’s handled with remarkable consideration. There’s a multitude of properties that spawn anime, manga, and drama CDs, but with Utawarerumono, the draw is understandable. This is a world you’ll want to be a part of as long as possible.

Although Utawarerumono’s world-building will undeniably enthrall anyone seeking escapism, if you’re solely thinking about venturing in because of the SRPG-like battles, you might want to slow your approach. Unlike many games that build the story around the skirmishes, narrative is foremost here. Instead, encounters offer respites from the conversations, making up about ten percent of total playtime. 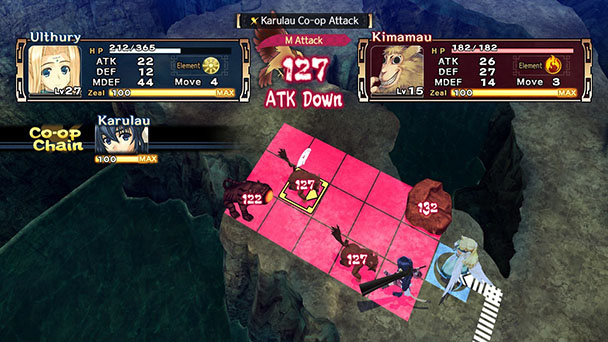 Despite that, there are quite engaging, with Utawarerumono taking cues from gridded strategy games where you’ll concern yourself with movement ranges, attacks, and the placement of your combatants. The franchise’s distinction is rooted in attack chains, where a precisely timed button press during turns will initiate extra attacks or even character-specific perks like healing. When characters are leveled up (you’ll have to cultivate your roster, as experience is correlated to dealt damage) and a Zeal gauge is maximized, you’re able to execute a Final Strike, a devastating assault that can turn the tide of battle.

There are some antiqued elements in combat, like having to equip items to specific characters before they can be used. But there are also a few traits that would be welcome in contemporary SRPGs. Being able to remind turns is an irreplaceable aid, especially because battles can waver in difficulty level. In the event where your approach needs a comprehensive overhaul, you can also restart the battle, too. 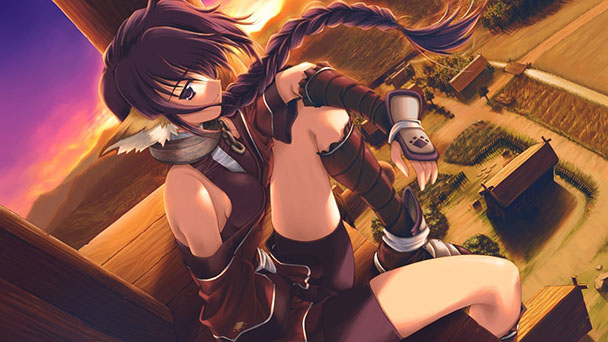 Nearly two decades on, Western players can finally enjoy the inaugural entry to the Utawarerumono franchise. Although some elements of Prelude to the Fallen still feel a bit dated, the game bring the original game in line with Mask of Deception and Mask of Truth, solidifying the satisfying series. With an adept localization that offers a slight upgrade on NIS America’s efforts, engrossing characters, and a plotline that scales outstandingly, it’s great to see platform parity for this remarkable property.

Utawarerumono: Prelude to the Fallen was played
on PC with review code provided by the publisher.

Summary : Whether you’re new to Utawarerumono or a veteran that’s journeyed through Deception and Truth, Prelude to the Fallen’s blending of visual novel storytelling and grid-based skirmishing won’t disappoint.