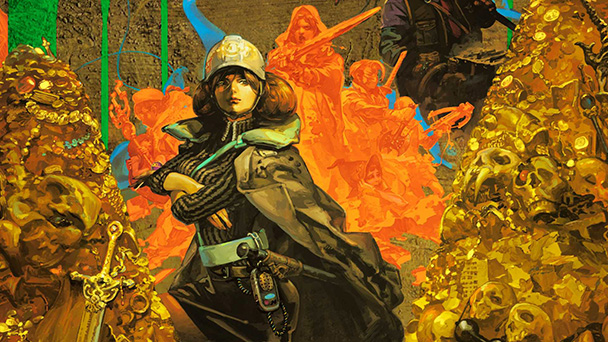 Venture into the Labyrinth of Yomi and you’ll find a remarkably relevant context alongside traditional dungeon crawl mechanics. The developer’s latest is undoubtedly one of the best efforts. 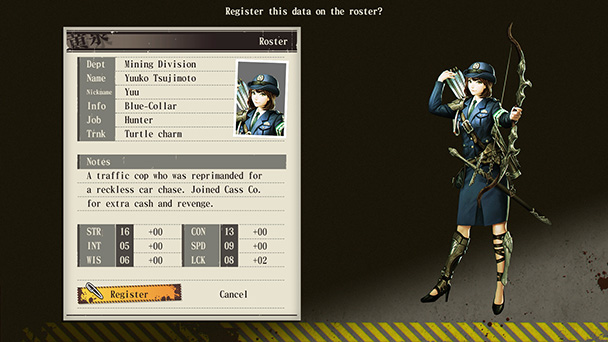 From Wizardry, Etrain Odyssey, Demon Gaze, to Mary Skelter, the dungeon crawl has been an enduring sub-genre. Rooted in the thrill of exploration and the tensions associated with taut, turn-based battles, these kinds of adventures often replicate role-playing’s table-top roots. Although other kind of role-playing games might offer intense action or gratification from complex character arcs, crawls habitually replicate the delights of playing Dungeons & Dragons.

The downside of course, is that they rigidly adhere to the foundations of Gary Gygax and Dave Arneson’s popular fantasy-themed franchise. While it’s undeniably fun cleaving through hordes of skeletons and orcs with a sword-wielding barbarian and using a loyal cleric to heal your party, there are probably moments when you need to break free from routine. If that’s the case, you might want to consider delving into Undernauts: Labyrinth of Yomi. 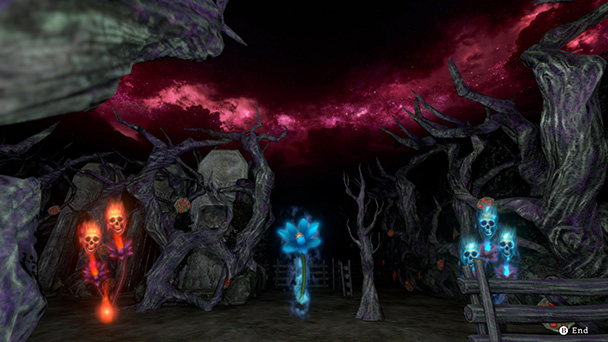 A Dedication to Dungeoneering

Some titles, such as Zen Studios’ Operencia: The Stolen Sun reflect a developer dabbling with dungeon skulking. But Hachioji-shi, Tokyo-based Experience Inc. are dedicated to the sub-genre, crafting seventeen different crawls since 2008. This kind of commitment sets them apart from most studios. The PlayStation 4, Xbox One, Switch, and PC release of Labyrinth of Yomi demonstrates not only a mastery of the fundamentals, but an inclination to break away from high fantasy formula.

Delve into the title and you find an unusually contemporary context. Set in an alternative 1979 Tokyo, the title’s eponymous maze emerges from ground of the massive metropolis. Investigation discovers that there’s treasure buried in the mysterious subterranean network. But there’s also a great deal of peril, with creatures eager to devour any unfortunate explorers they encounter. 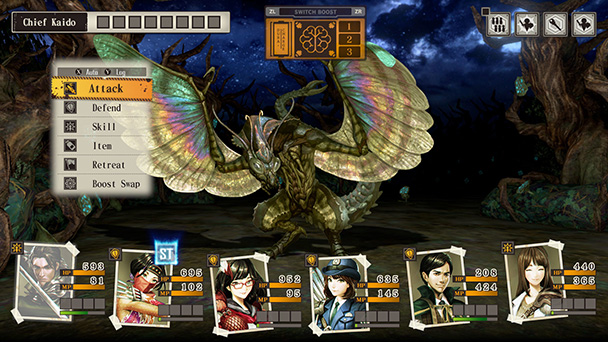 Yomi = Land of the Dead

While that’s a fairly standard set-up, Undernauts injects the title with sociopolitical intrigue. A monolithic corporation named Cassandra has begun to venture downward, eager to stake a claim against envious rival companies. But echoing the themes of Squid Game, Experience imagines a working classes with few opportunities recruited for life-threatening work. Although the character creation module uses templates to construct backstories for your adventurers, it’s easy to develop an affinity for the game’s underdogs. And when’s the last time you really empathized with a dungeon party member?

Pleasingly, there’s a bit of autonomy when drafting your party. You can scour over every detail, attempting to create a definitive, synergistic team. But if you’re like me and can’t wait to descend into the labyrinth, there are also preset names and responsive menus that make party construction more convenient than most crawls. Beyond cameos from Experience’s body of work, there’s also a nice variety of constituents to select from. 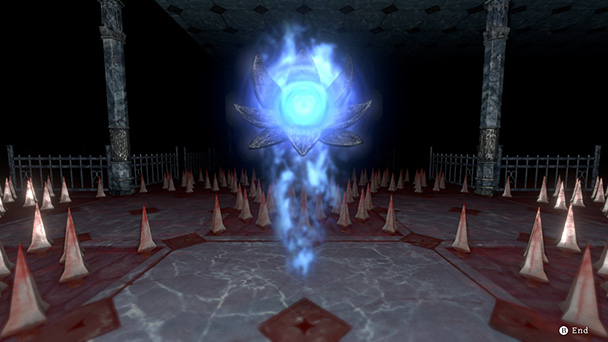 Down in Yomi, success means survival and it’s not a spoiler to state that some Undernauts won’t make it back to the surface. Expectantly, the downtrodden are put through the corporate grinder, providing not just a sense of danger but an aura of distress for the game’s working class. But that’s hardly the only distressing thing about Yomi. There’s the presence of a propaganda-pushing radio station that can be heard when you return back to camp. Even more disturbing is a character in unrelenting torment, her blood literally used to keep the whole system operational. What is intriguing is how Undernauts doesn’t devote a lot of lot to individual-based storytelling, creating an aura of downheartedness by gradually revealing more details of its dehumanizing world.

Venturing into Yomi reveals a trek that injects just a bit of freshness into dungeon crawling formula. Expectedly, exploring the game’s subterranean maze offers many conventional amenities. As your party reconnoiters the labyrinth, there’s automapping to prevent you from getting hopelessly lost. While there are some random encounters in the depths, Undernauts reveals most of its encounters through color-coded icons that divulge the dividends of a successful fight. 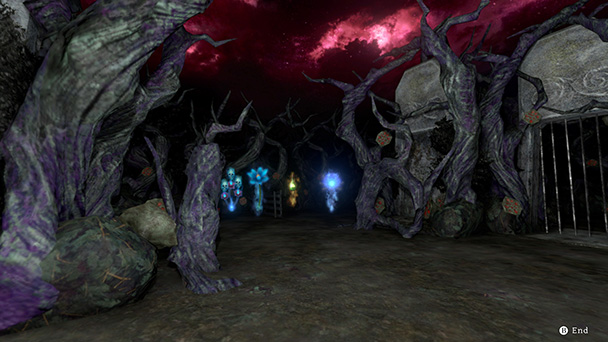 But there’s also plenty on innovation as well. Early on, you’ll be given Yomi Flowers that can be used to modify the game’s maps. These consumables offer the ability to construct doors, bridges, and ladders, which offer a gratifying reprieve from the confines of most dungeon crawls. The developers will tempt with treasures that are just out of reach. But players to scrutinize the map can create their own shortcuts or venture into hidden zones that would otherwise be off limits.

Combat relies on some of the tenets of the sub-genre, so you’ll place your party in formation of front-row melee-based damage dealers (vanguards) while the back will be stocked with spellcasters and ranged combatants (rearguards). Undernauts provides the ability to speed through combat or replicate your party’s previous actions which is useful when battling low-level foes. But when tackling more obstinate foes, you’ll want to take your time and seize every strategic opportunity possible. Expectedly, you’ll earn a succession of new offensive and defensive skills and learning the best ways to utilize these in battle can feel quite rewarding. 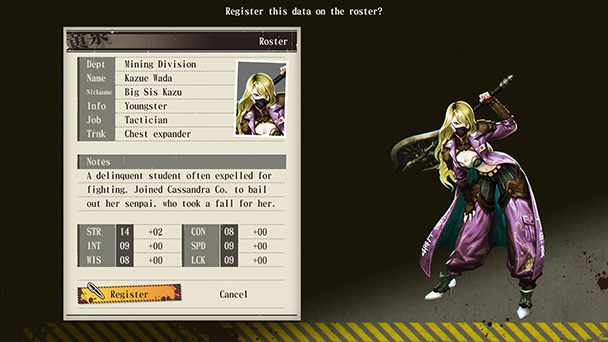 Dungeon crawlers aren’t always the more accessible games, habitually wiping out parties without mercy. But Labyrinth of Yomi is far less sadistic than most of entries, with traits like autosaving in the middle of expeditions and losses that return to camp, rather than subjecting you to the punishment of permadeath. Additionally, there’s even a nod to the Shin Megami Tensei titles, with creatures that might offer an olive branch rather than just a poisonous sting. Like Atlus’ famed franchise, there’s a lot of creative creature hybridization, recalling Greek and Roman mythologies. Pleasingly, Undernauts offers a bit more animation than the static images employed by many crawls.

Balancing archetypical dungeon crawling elements with a multitude of creative elements, Undernauts: Labyrinth of Yomi just might be Experience’s most realized effort to date. For a studio that’s been dedicated to the sub-genre for over a decade, that’s not a hollow compliment. Save for the habitually splendid Etrain Odyssey series, this is one of the best crawls in years. Bolstered by a context and artwork that diverges from D&D tropes, this is the trek you’ll want to undertake if you’re fatigued by high fantasy. 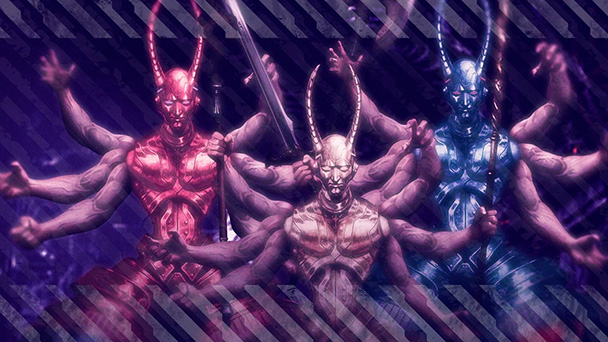 Undernauts: Labyrinth of Yomi was played on
PlayStation 4 with review code provided by the publisher.

Undernauts: Labyrinth of Yomi review
Venture into the Labyrinth of Yomi and you&rsquo;ll find a remarkably relevant context alongside traditional dungeon crawl mechanics. The developer&rsquo;s latest is undoubtedly one of the best efforts. From Wizardry, Etrain Odyssey, Demon Gaze, to Mary Skelter, the dungeon crawl has been an enduring sub-genre. Rooted in the thrill of exploration and the tensions associated with&hellip;

Summary : Dungeon crawlers may not garner the same amount of attention as shooters or action games. But don’t overlook Undernauts: Labyrinth of Yomi if you’re looking for a more contemplate experience. Accessibility makes this an ideal inroad for those who willing to delve into the sub-genre.