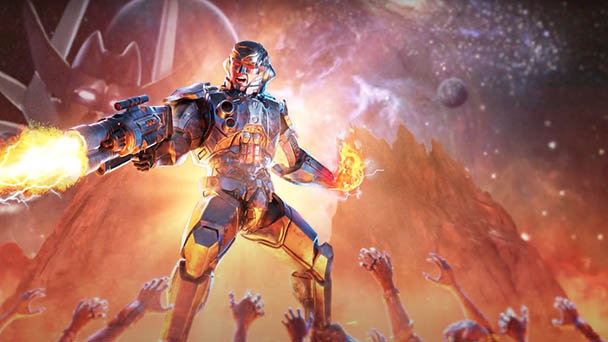 A subset of the more costly physical edition, the digital edition of Turrican Flashback Collection is for serious retro enthusiasts only. While Turrican undoubtedly has a place in gaming history, its play might feel a bit too antiquated for those raised on more recent run-and-guns. My fellow gaming geriatrics will appreciate everything but the lack of extras. 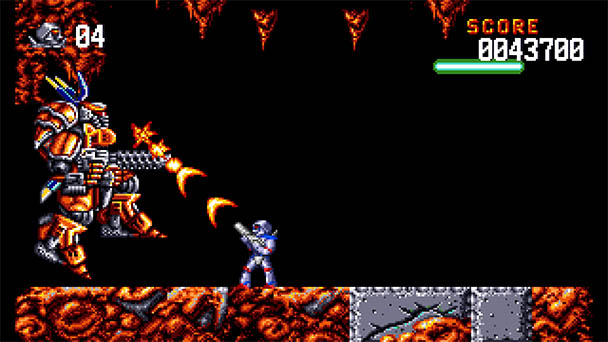 1990’s Turrican was inspired by several titles. With players able to send out a persistent torrent of firepower, Konami’s Contra (1987) was an obvious influence. But so was Psycho-Nics Oscar, a lesser-known arcade game that was released by Data East the same year. With the protagonist’s ability to roll into an indestructible ball and drop bombs, Metroid (also 1987), likely played a role. While Turrican and its sequel indulged players with plenty of fodder to shoot, exploration was just as important. Survival meant committing the game’s landscapes to memory. Fall into a waterfall or a patch of spikes, and your progress would come to a crashing halt.

The franchise last mainline entry was 1995’s Super Turrican 2 for the Super Nintendo. But it’s hard to imagine that the series didn’t help influence the direction of titles like Treasure’s Gunstar Heroes (1993), Ranger X (1993), and even more modern titles like Gunlord (2012). When looking back on the six-game series, it’s rather surprising how close sequels adhere to the inaugural game’s basic foundations. 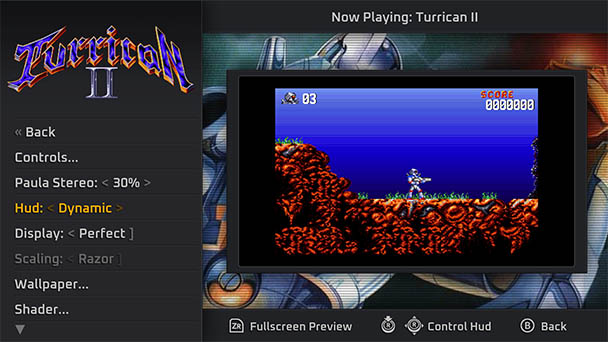 Given Turrican’s place is gaming history, it’s hardly surprisingly to find the series honored with two retrospectives. The first in a €100 physical edition published by Strictly Limited Games. In addition to the six mainline titles, you get four Director’s Cut and Score Attack variants, as well as goodies like a documentary, soundtrack, stickers, and art book.

For those unwilling to come up with the substantial sum, there’s the Turrican Flashback Collection. This is a digital anthology that bundles the Amiga versions of Turrican 1 and 2, as well as the SNES iteration of Super Turrican and the Genesis/Mega Drive’s Mega Turrican. What’s missing is Turrican 3 and Super Turrican 2, with the latter considered by some to be a high point in the series. Personally, I’m not irritated by the lack of software parity between physical and digital editions. But it’s a customary marketing technique intended to justify the exorbitant price of the premium package. 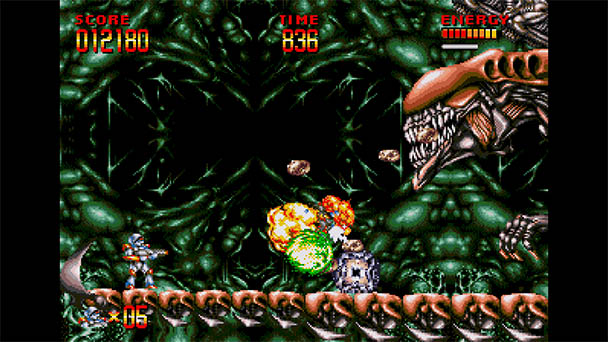 Jump into the significantly more affordable digital edition and you’ll be greeted with a screen that permit players to jump right into any of the anthology’s four titles. As the initial entry, Turrican is the logical launching point, with a tour of successive title showing the series’ gradual evolution. Originally developed on the Commodore 64, Manfred Trenz’s title was a technical marvel for the popular home computer. The modest hardware habitually pushed a small number of sprites on-screen. But Turrican felt like seizing control of a bipedal death machine. Picking up power-up radically increased your offensive output, and seeing monitors filled with your projectiles as untainted power fantasy.

As a mutant warrior, bio-engineered to exterminate mutated life forms, Turrican should probably be able to shoot skyward. But you’ll have to practice a low-G leap along with horizontal aiming to eliminate swarms of foes. Platforming plays a key role in advancement and like the game of old, you’ll have to take the occasional leap of faith. But given the linear path of most ‘90s-era run-and-gun, the exploration is welcome and you’ll find yourself venturing deeper into the game’s craggy environments with each new play through. Beyond a wealth of enemies, score-boasting diamonds, 1ups, and power-ups are also plentiful, with the latter nearly essential when confronting the bosses of each world. 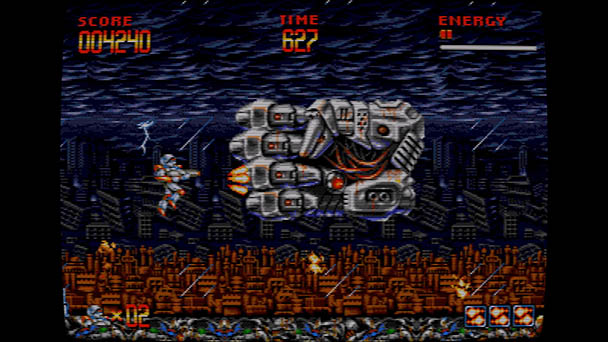 Turrican 2 shows the franchise making a few concessions to players. Early on, there are fewer gaps to fall into, making early progress a bit easier. Complementing the spread shot and laser for the original game, you’ll also have access to a bouncing weapon, that can ricochet shots off the environment. But the biggest offensive change occurs when you hold the fire button, triggering an aimable beam that is invaluable against elevated enemies. Visually, backdrops are much more sophisticated, flaunting seven layers of parallax scrolling. Much like the first Turrican, Chris Huelsbeck’s soundtrack offers chiptune enchantment, showcasing some talented melodies and resourceful sonic engineering.

With Super Turrican, developmental duties shifting from Manfred Trenz’s solo work to Factor 5’s small team. This is the same group who crafted Mega Turrican and the similarities are evident. But the biggest departure with the Genesis/Mega Drive title is the incorporation of a grappling hook, recalling Bionic Commando. With both titles, levels are a bit smaller and exhibit a vibrant color palette, offering visual distinction. Super Turrican is noteworthy for harnessing the power of the SNES’s Mode 7’s mode. Here, bosses, like a giant robotic fist zoom in size and rotate around the screen with fluidity that was novel for the time. 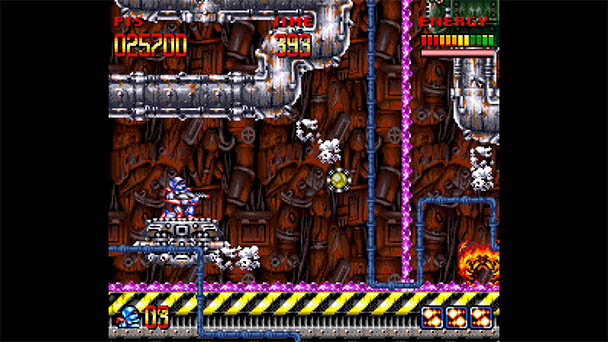 As for supplementals, the collection is quite stingy. Sure, there’s a list of credits and two paragraph overviews for each game. But given the majority of Turrican’s backstory was told in the pages of accompanying manuals, the omission of any kind of digital recreation is troubling. Since, the documentary is restrained to the physical edition, don’t expect much context built into the collection. That’s a worrisome trend as documentation for gaming’s early years can be limited. If compendiums don’t make an effort to record history, they seem motivated by profit rather than for the pursuit of posterity. I’m sure the more casual retro fans would have appreciated the whole story of the franchise’s name (Purportedly, a random selection from a German phone book).

The one worthwhile addition is the ability to rewind play with the press of the left shoulder button. While this kind of contrivance can feel like cheating with some games, the occasional off-screen death-bringer can make the tool feel invaluable. Seriously, how did we have the patience to re-conquer Turrican’s worlds in the old days?

Turrican Flashback Collection in in an odd position. Series devotees will probably want the physical collection that comes with the games, variants, and extras. That leaves the digital version for those on a tighter budget and the less obsessive. Twenty-five years on, these games will still fun, but don’t offer the kind of variation found in the Konami’s Arcade Classics Anniversary Collection or the Sega Genesis Classics package.

Turrican Flashback Collection was played on PlayStation 4
with review code provided by the publisher.

Turrican Flashback Collection review
A subset of the more costly physical edition, the digital edition of Turrican Flashback Collection is for serious retro enthusiasts only. While Turrican undoubtedly has a place in gaming history, its play might feel a bit too antiquated for those raised on more recent run-and-guns. My fellow gaming geriatrics will appreciate everything but the lack of extras. &nbsp; 1990&rsquo;s Turrican was inspired by several titles. With players&hellip;

Summary : The digital version of Turrican Flashback Collection is a bit shallower and less refined than its physical counterpart. But if you’re looking for accompaniment for a few evenings and maybe even a bit longer, this will do.