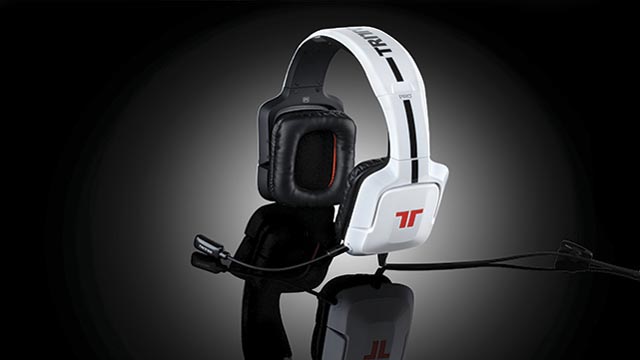 While graphical fidelity is habitually debated across internet gaming forums, sonic quality is often overlooked. Considering that both the Xbox 360 and PlayStation 3 pump out immersive, 5.1-channel Dolby Digital Surround Sound (with the PS3 even able to deliver 7.1-channel LPCM), the aural capabilities of both consoles are usually only harnessed by gamers with pricy, often bulky, home theater systems. For players with a limited amount of space or those who cohabitate, a multi-speaker system with a rumbling subwoofer may not be feasible. With the release of the Tritton Pro+ headset, peripheral producer Mad Catz offers an apartment-sized, roommate-friendly solution.

The manufacturer’s dedication to delivering an advanced aural experience is foreshadowed by the unboxing of the headset. Each of the nine protectively packaged components are individually lettered- corresponding to a pictogram on the package’s glossy quick reference foldout. While Mad Catz quizzically shuns a full instruction manual (offering an online guide instead), the sheet adequately covers the fundamentals of getting the Pro+ headset up and running. The sole potential pratfall is that the set-up sheet neglects to mention the removal of the plastic protector tips from the ends of each TOSLINK optical cable. Audio apprentices just might try to force the connection, inadvertently damaging the cabling or the Dolby Digital Decoder. 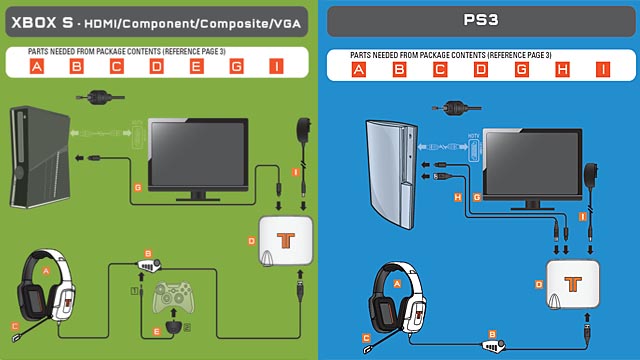 That single oversight aside, setting up the headset is relatively painless, thanks to the mercy of a twelve-foot long optical cable and a somewhat more modest AC adapter with a six-foot reach. Plugging in the Tritton headset into one of the two proprietary ports of the decoder readies the receiver for sound- while a detachable, bendable microphone screws into the bottom of the left earpiece. Pleasingly, each connection fastens tautly and uncouples securely. Small refinements such as the removable prongs on the adaptor (presumably to ease transport) and the belt clip on the in-line control switch demonstrate a gratifying attention to detail.

Bolstered by a variety of adjustable options, the Tritton receiver conforms to almost any cranial size and shape. Beyond the typical capacity of adjusting the aperture of the headset, the earpieces rotate along the horizontal and vertical axes providing just enough tension to retain their position. Although the receiver is a bit weighty, the fatigue which often accompanies sizable headset use wasn’t evident. Pleasantly, the unit’s faux leather ear coupling’s subdued background noise, while offering a comfortable and breathable encasement. 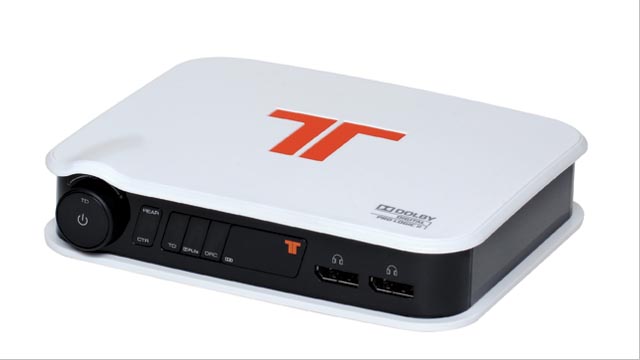 Anyone who has ever set up a room-sized 5.1-channel surround system knows that seamless stereo imaging can be thorny- even a slight rearrangement can force purists into recalibrating their systems. Naturally, recreating the sensation within a headset is a tricky proposition since a good portion of the auditory clues needed for sound localization are distance-based. In execution, the four speakers which Tritton places next to each ear (30 mm front and rears, a 23mm center, and a 40mm subwoofer) produce quality output. Yet, those expecting the spatial fidelity, to say, locate the direction of an enemy sniper, may be a bit disappointed.

With a bit of fiddling with the in-line controller’s sound field settings, sound localization can be tweaked- allowing user to increase or decrease volume to the four speakers. However, even with a copious amount of tuning, our blindfolded testees only intermittently determined the direction of a SMG-firing opponent in a mockup Call of Duty: Black Ops 2 deathmatch. Similarly, the location of rival cars in Need for Speed: Most Wanted lingered just outside the threshold of perception. 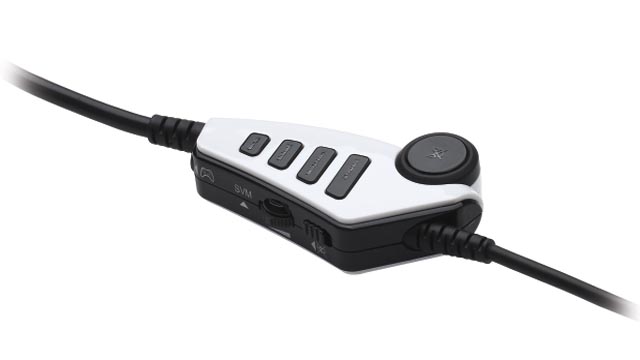 However, once the eye coverings were removed, each player remarked at the superiority of the Pro+’s throaty output. Halo 4’s weapon fire felt sufficiently punchy, with the SRS99-S5 AM sniper rifle delivering a nice sense of ballistic bombast. Likewise, Forza Horzon’s output was adeptly rendered. Nearly every tester remarked on the impressive growl of a revving V-8 and the realistic sputter associated with a downshift. If there was one complaint, it’s that the Tritton’s output was low to mid-range heavy; for some, music and voice lacked crisp, sparkling highs. Ideally, future iterations would offer some sort of EQ, perhaps built into the decoder.

Those on the other end of online matches thought that the quality of the headset’s microphone equaled at even trumped the output of the stock Microsoft microphone. Players who shirk using a mic during late night sessions in fear of waking others will be happy to know that the attachment’s sensitivity is impressive, allowing for clandestine quiet chatter. The option to hear your own voice while chatting earned a few admirers while others appreciated being able to easily adjust games sounds and chat volume. 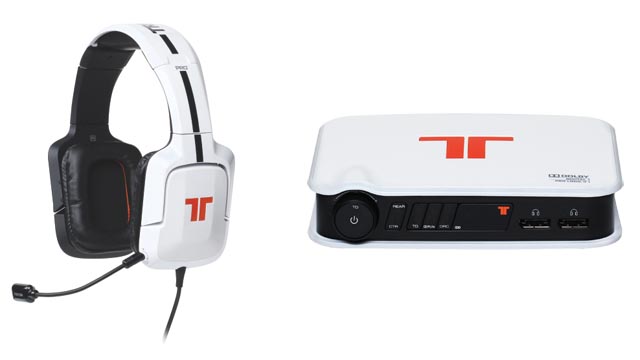 Consistently, testees commanded the Pro+‘s build quality. Calling the headset and decoder “sturdy” and “well made” most thought the Tritton was able to withstand a fair amount of mistreatment. After two and half weeks of vigorous use, this assessment appeared appropriate. A wiping of half a month of residue revealed no cracks in the head cushions or ear couplings, while the unit’s hard plastic maintaining a chip-free finish. Accidental squashing the headset’s cord with an office chair yielded the slightest hint of cosmetic damage (usually shredding most USB cables), but no discernible impairment to audio output.

While the Tritton Pro Headset struggles to provide consistent surround sound spatial imaging, the peripheral’s enhancement to aural output is undeniable. After testing the unit for a few weeks, returning to 2.1-channel sound is nearly unthinkable. Unambiguously geared for gaming, the Pro+ allows the meticulously crafted sound mix to be appreciated-  articulating every explosion, punch, and ambient effect with satisfying accuracy.