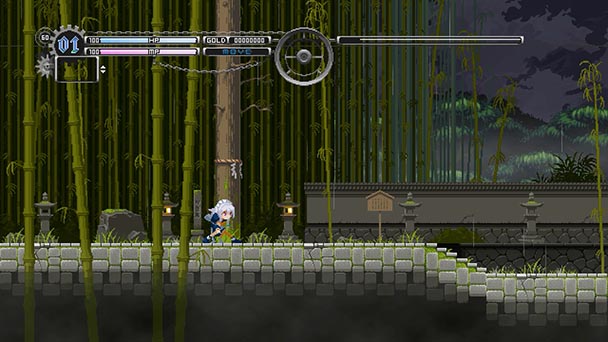 The Touhou Project began with a collection of meticulously-coded bullet-hell shooters, or danmaku. Coded by a former Taito programmer, who operated under the moniker of Team Shanghai Alice, the games earned distinction not just for the mind-boggling number of on-screen projectiles thrown at the player, but also for their inventive setting and characters. Set in a fiction land called Gensokyo, where Feudal tradition, folk lore, and pop culture intermingle, Touhou quickly resonated with players. When coupled with creator’s refreshingly lax approach to the property, fan-crafted efforts soon proliferated.

Over the past two decades, conventional lead Reimu Hakurei’s adventures are remarkable diverse. No longer just the lead in shooters, she and her Gensokyo-based brethren have starred in fighting games, platformers, racers, rogue-likes, seemingly penetrating almost every genre in gaming. 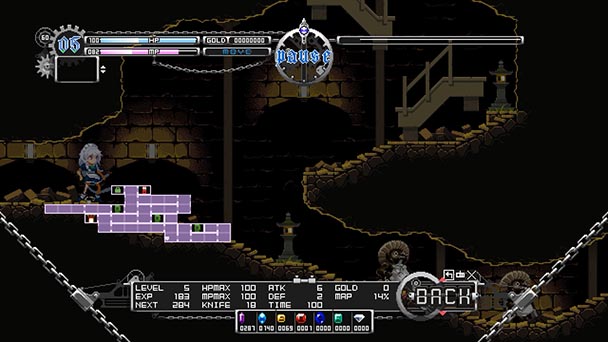 With the release of Touhou Luna Nights, capable doujin-circle Team LadyBug (Shin Megami Tensei: Synchronicity Prologue, Pharaoh Rebirth) offers an imaginative take on Metroidvania-style action and exploration. Here, longstanding antagonist Remilia Scarlet sends her maid into one of Gensokyo’s parallel universes, offering a petite but pleasing Early Access excursion. Although a playthrough only lasts about forty minutes, Luna Nights shows enough potential to warrant an anticipatory purchase. If Team Ladybug can maintain the level of quality revealed here, the title could potentially become one of the genre’s exemplars.

Much of Luna Night’s success steams from the feeling of raw power contributed by protagonist Sakuya Izayoi. Dressed in frilly maid attire, she might seem like an unassuming combatant for those unfamiliar with Touhou history. But diehard fans might remember her debut as an imposing boss in Embodiment of Scarlet Devil. Similarly, she’s a real threat here, throwing daggers with the kind of speed and range to make a Belmont envious. Feather the attack button and Sakuya lets loose with a barrage that can quickly decimate a malicious tanuki or floating spirit. Sure, throwing in regulated by a magic meter, but save for the concluding boss battle, running short on firepower is only an issue during the concluding boss battle. 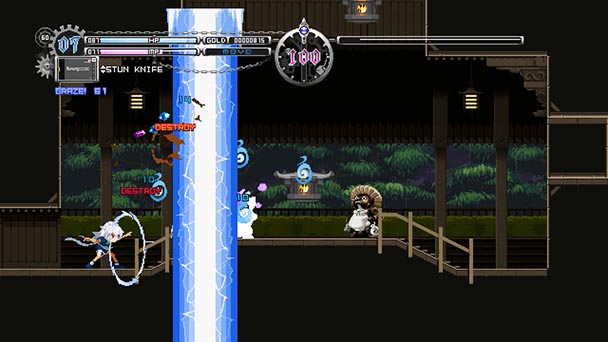 Occasionally, you’ll want to refrain from flinging blades into foes. In keeping with Touhou tradition, you can graze enemies, permitting them to come perilously close so they’ll emit fragments that can refill your health and magic power. Given that adversaries respawn when revisiting areas, you can easily exploit this trait, mining health and magic from encroaching enemies before darting offscreen and then repeating the process. But save for that final boss battle, challenge is Luna Nights is rooted in the small navigational puzzles rather than exchange of blows that conventionally drives combat in the genre.

Here, Sakuya’s temporal manipulation skills emerge, permitting the protagonist to slow and even stop time. Trigger the stoppage of time and the head of the Scarlet Devil Mansion can scamper across the surface of water, accessing a precipice that was just out of the reach of your jump. This ability also lets you access areas safeguarded by floor switches, with Sakuya freezing time to bypass a plumping wall. If you ever are in need of a boost a magic power, you can also stop time, grazing motionless foes, and even launching daggers which impale enemies when time restarts. 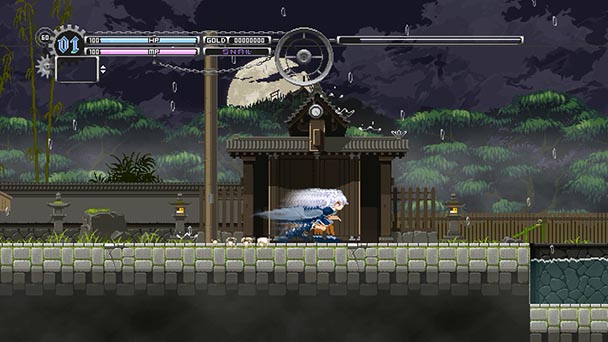 Currently, there are a few issues with the current build of Luna Night. Try to sell one of the hundreds of stones dropped by defeated enemies and you’ll encounter a buyer who will only purchase one unit at a time. Like many games, there’s a large disparity in challenge between regular enemies and bosses. While subordinate foes exist as level fodder, hopefully confronting them in the final build them will feel more perilous. As it stands, it’s too easy to mash the attack button, annihilating them before they can even engage in attack patterns. And while Team Ladybug is finalizing a trio of additional levels, the game’s single stage excursion might feel too brief for those seeking protracted entertainment right now.

For the patient, Touhou Luna Nights appears to be shaping up into something quite special. Animated gifs hint at what’s in store, with Sakuya using her time stopping powers to protect herself from a falling chandelier and accessing elevated staircase by hopping on her own motionless daggers. Personally, I’m excited for what additional visual treats the team has it store. Already, Luna Night features bamboo forests adorned with hanging shide, tranquil temples, and enemy designs that will delight fans of Japanese folklore.