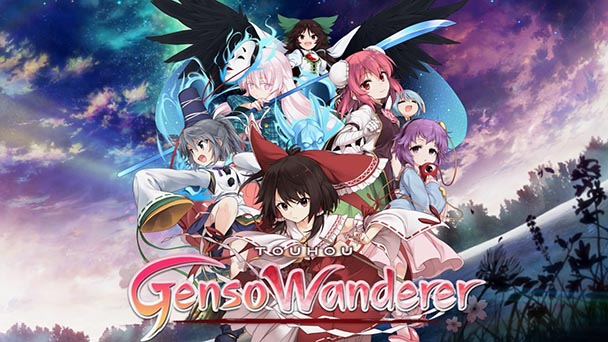 Affectionally known as ZUN, Ota’s moment began with the creation of a collection of vertically scrolling danmaku, or bullet hell shooters. The efforts were exceptional enough to spur a succession of fan-crafted efforts. Initially, many of these were modeled after ZUN’s titles, but before long doujin circles had contextualized the mythos across a variety of genres, thus forming The Touhou Project. Certainty, ZUN’s lack of formal licensing, and a mere request for acknowledgment, had much to do with Touhou’s meteoric rise in popularity. 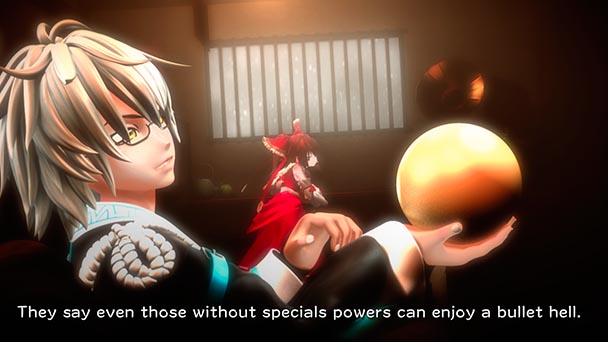 Within the past few years, Western gamers have been privy to a few of the most exemplary Touhou Project efforts, with XSEED’s publishing of Touhou: Scarlet Curiosity, and NISA’s localization of Touhou Genso Rondo: Bullet Ballet.  With the release of Touhou Genso Wanderer for the PlayStation 4 and PS Vita, stateside gamers are receiving another scintillating effort borne from the talent of a top-tier doujin circle. Like most Touhou titles, the game draws on familiar genre tenets, while offering the type of innovation that fervent fans might considering adding to the formula.

Wanderer’s narrative impetus is rooted in a short animated cinematic starring the impetuous shrine maiden Reimu Hakurei, and a cautious shopkeeper, Rinnosuke Morichika. After spying, handling, and subsequently dropping a figurine, Hakurei’s attention becomes fixated on the golden orb that’s in Morichika’s possession. Transfixed by the lavender aura of the globe, the shine maiden desperately reaches to touch the item, triggering a brief dispute between the duo, and causing the artifact to plummet to the floor. The tumble isn’t without repercussion however, as Morichika starts acting strangely, his eye drenched in a curious color, and the shop transforms into a sprawling tower with local denizens turn into belligerent antagonists. 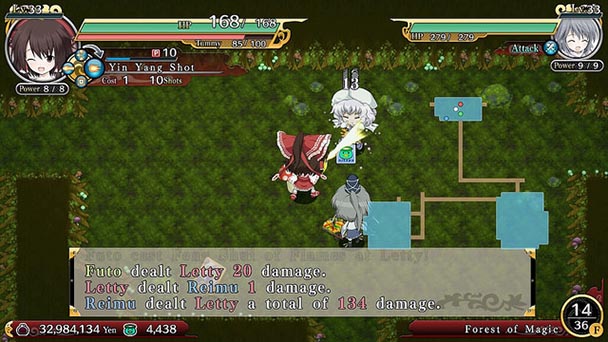 As Hakurei begins exploring the emergent stronghold via a guided tutorial, she meets Futo Mononobe, an energetic sage who decides to offer her assistance. More importantly, the incorporation of a second character allows Genso Wanderer to offer a bit of conversation as the sluggish shine maiden is juxtaposed with the energetic go-getter. While contrasting personalities can be a bit hackneyed, here the title handles the set-up giftedly, offering up some humorous repartee between the explorers outside of the adventuring.  Unfortunately, some of the levity might be lost on those who aren’t ardent Touhou followers, as there’s a wealth of references. As such, some might be wondering why Mononobe wants to turn temples down.

Initially, Touhou Genso Wanderer’s mechanics seem to replicate the reconnoitering found in the Pokémon: Mystery Dungeon and Shiren The Wanderer series. In execution, the title is turn-based, with any on-screen enemies moving or striking after each player command. Like many of its contemporaries, success in the randomly-generated environments is contingent on prudent management, with players overseeing a multitude of interconnected variables. One example, is the hunger meter, which offers a visual and numerical representation at the top of the screen. When filled, any incurred damage will gradually repair itself, but when the gauge becomes depleted, not only will you not recover, but subsequent steps will wear away your precious life force. 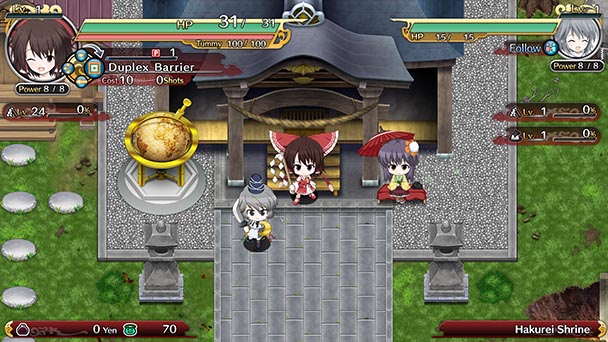 Naturally, you can opt to eat items to offset the sentiment of starvation, but the way food perishability is handled begins to show Genso Wanderer’s divergences. Stepping on some traps can instantly spoil your edibles, while walking over a mine incurs significant health damage, but miraculously roasts any rations to perfection. You can opt to protect your food in a useful item known as a gap, but these safeguards place their own status effects on your possessions.

Most interesting is the incorporation of danmaku elements during exploration. By picking up power-ups marked with a “P”, your character has access to a variety of ranged and area-of-effect attacks. Typically, you’ll want to save these for the exceedingly desperate situations, but like any well-balanced game, temptation like to loiter. Like most Rogue-likes, defeat is always close as well, especially with opponents that can curdle your entire inventory of food or teleport adjacent to poor Reimu. Expectedly, death relieves you of your progress and sends you back to the first floor. Mercifully, you do get to keep some of your possessions, so a fatality isn’t complexly demoralizing. 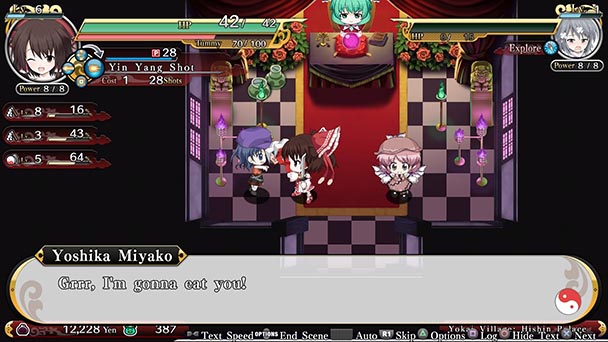 With such a high level of challenge, arms and armor which gain experience and can be augmented even further, helping to keep a sense of balance. By fusing your equipment, Hakurei stands a solid chance against conquering the dungeons in the main storyline. An in execution, if you’re lucky enough to stumble across a succession of items, it’s entirely possible to craft a formidable weapon that hits multiple times, reimbursing your supply of hit points with every strike. After playing a succession of Rogue-likes with orthodox loadouts, Genso Wanderer’s punishers were a real payoff.

Aesthetically, the title employs charming super-deformed sprites for the dungeon-based exploration, while massive portraits filling the screen during conversational interludes. Largely, it’s difficult to tell that the game was made by a doujin circle, rather than a team of seasoned developers. Although the individual soundtrack selections are pleasing, with some classic Touhou remixes to be found, there’s a lack of cohesiveness to the proceedings. As for voice work, the game’s actors deliver a capable performance, with main characters converging on professional levels. 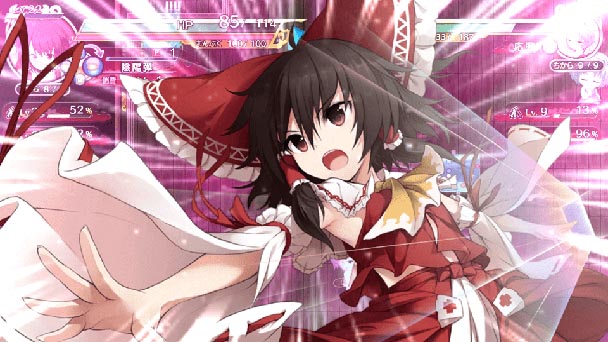 Enjoyment of Touhou Genso Wanderer hinges on your appreciation for Rogue-likes. Gamers not enamored by the genre, or players who have exhausted their enthusiasm for turn-based exploration likely won’t find enough deviation to warrant a purchase. But for those who still relish the thought of using their wits and randomized items to overcome floors filled with adversity, Genso Wanderer is worthy of your time and money.

Touhou Genso Wanderer was played on the PlayStation 4
with review code provided by the publisher.

Touhou Genso Wanderer
Platform: PlayStation 4, PS Vita
Developer: Aqua Style
Publisher: NIS America
Release date: March 21st, 2017
Price: $49.99, retail or via PSN download
Language(s): Japanese voice, English Text
ESRB: Teen
Touhou Genso Wanderer review
In the West, most lucrative intellectual properties are protected with litigious fervor. But that&rsquo;s not always the case across the rest of the world. Case in point: in Japan, former Taito programmer Jun'ya Ota spurred an entire industry of fan-made games simply by adopting a flexible approach to his lore and characters. Affectionally known as ZUN, Ota&rsquo;s moment began with the creation of a collection of vertically scrolling danmaku, or bullet hell shooters. The efforts were exceptional enough to spur a succession of fan-crafted efforts. Initially, many of these were modeled after ZUN&rsquo;s titles, but before long doujin circles had&hellip;

Summary : Sure, the last few years have brought a cavalcade of Rogue-likes to consoles and portables. But Touhou Genso Wanderer is one of the better efforts, with likable characters and a substantial amount of challenge.