Three Against the World: Trine 2 Review 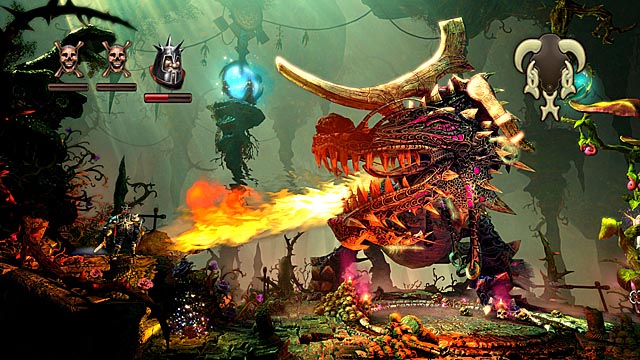 What is the concept? Recalling the SNES puzzler, The Lost Vikings, Trine 2 tasks players with utilizing the unique skillsets possessed by a trio of protagonists. From Pontius the knight’s competency for breaking foe and fortification with sword or hammer, Zoya the thief’s deadly ranged bow and handy hookshot, to Amadeus the wizard’s summoning and levitation abilities, the title provides players with a comprehensive collection of tools. Success amidst the game’s physics-based conundrums hinges on the creative and collaborative use of each character’s capabilities, as players trek through the game’s sumptuous environments.

Yet, unlike Silicon & Synapse’s beloved console classic, Trine 2’s embeds a salubrious amount of action between its cube conjuring and fulcrum shifting sequences. Both conventional enemies and boss encounters prohibit the title from becoming sterile, with the intermittent influx of goblins helping to provide a varied tempo. Bolstered by an obliging help system (which only kicks in after players have been stuck on the same conundrum for a few minutes) as well as the noncompulsory enhancement of the main characters, Trine 2 furnishes a refreshing amount of flexibility. 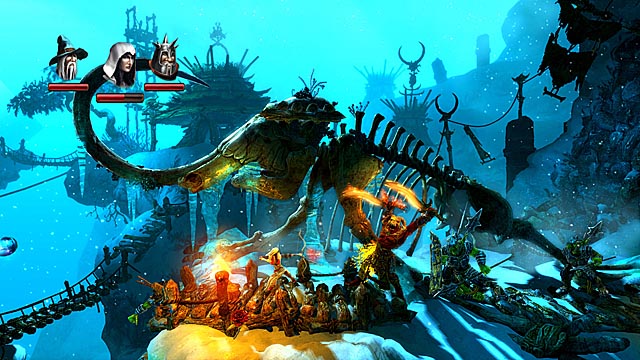 Would I enjoy the game? Although the title’s cerebral challenges and indulging combat may attract the notice of gamers, the game’s visuals will immediately seize the attention of any graphic tart. With vivid backdrops which recall the work of Roger Dean and Boris Vallejo, Trine 2 dazzles gamers with a steady procession of retina-coddling fantasy-themed art. From forts overrun with belligerent flora, castles illuminated by the quixotic radiance of moonlight to behemoth soap bubbles which reflect the environment, the game is unadulterated eye-candy.

What are the game’s strengths? Thankfully, Trine 2’s head scratchers sidestep the single solution puzzles common to the genre. Instead, the game stimulates multiple, organic remedies to problems- such as the insertion of a foreign object to gum up a set of gears. While enemies can be vanquished with the knight’s or thief’s arsenal, Trine 2 also permits players to use environmental objects to bring foes to a satisfying death. 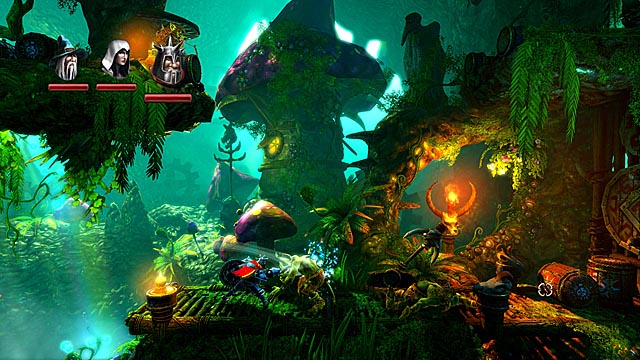 Each hero is able to supplement their abilities after collecting blue vessels which are scattered across the alcoves of each stage, dynamically changing how the game’s puzzle can be solved. Giving Amadeus the ability to invoke a wooden plank allows for the creation of an impromptu bridge capable of granting passage over a precarious chasm. Alternatively, players who have spent their experience points to strengthen Pontius’ with a flaming attack are often still able to clear the gap with some vigilant joystick jockeying. Smartly, players are never locked into skill-tree decisions; a press of the back button allows for a quick redistribution of abilities.

What are the game’s weaknesses? Occasionally, players will engineer a puzzle solution which should abide by the game’s mechanics, but doesn’t. Like any game with a robust physics system, unexpected outcomes can ensure, but they are usually infrequent and humorous enough to sully Trine 2’s blissful vibe. Fortunately, a liberal checkpoint system restores both health and any decreased heroes- prohibiting unnecessary backtracking. 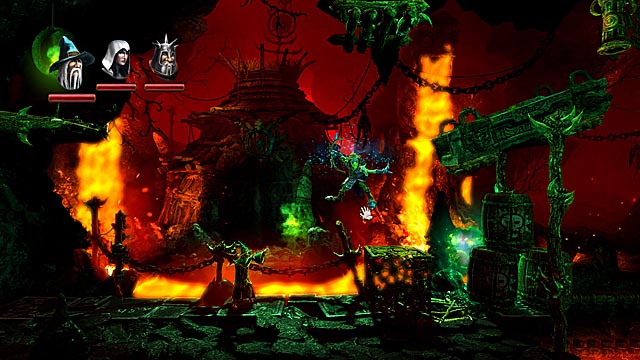 Is it worth the money? For fifteen dollars, Trine 2 offer an intensely satisfying single-player campaign, as well as online and couch co-op which radically alter the way the game is played. Although separate stages designed to take advantage of the title’s multiplayer possibilities would have been pleasing, as it stands, the game easily warrants its price of admission. Succinct, deftly polished, and visually opulent, Trine 2 exquisitely demonstrates the potential of the downloadable title.

A copy of Trine 2 for the Xbox 360 was provided by the publisher for review.

Previous: Podcast 9-4: Blinky, The Ghost of Christmas Present
Next: New Releases for the Week of December 25th, 2011