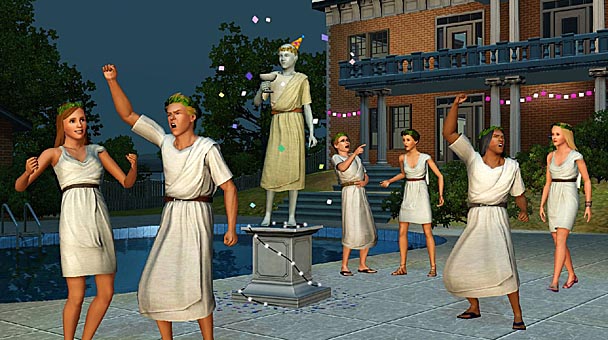 While the existence of a third-generation Sim includes most of the crucial milestones of an actual life, Maxis’ virtual beings have traditionally been barred from attaining a college education. Following the fulfillment of a high-school diploma, adult Sims would be thrust into the working world to etch out a career path. With the release of The Sims 3: University Life expansion pack, players can now experience the tensions between academic achievement and the lures of collegiate carousing, while generating new vocational opportunities.

Once players install the 9.6 GB download, they’ll have the option to send any Sim with at least a high school diploma to college. This marks a pleasing departure from The Sims 2: University, which constrained the prospects of higher education to young adults. After completing a brief aptitude test, Sims may be able to receive both financial aid and credits toward one of six degrees: business, technology, science and medicine, communication, fine arts, or physical education. Those who didn’t excel in either high school or their vocational pursuits may still enroll- using a phone or computer to complete the matriculation process. Although players may tailor their educational experience by adjusting the number of credits per term and how long to attend school, those seeking to earn master’s or doctorate degrees may be disappointed to find that the university experience is limited to undergraduate studies. 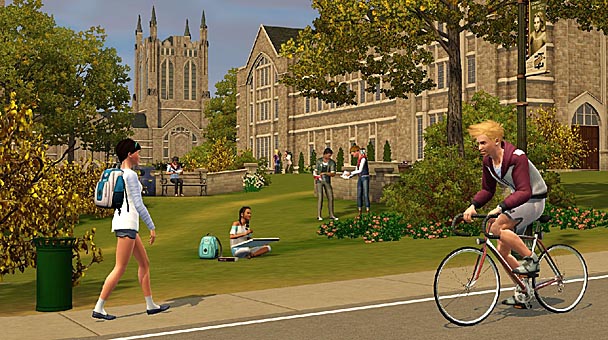 Once the essentials of admission are accounted for, Sims immediately pack a loading truck and are ushered toward the Sims University, a pastoral locale that hosts several residential possibilities- from dorms, fraternity or sorority houses, to off-campus housing. Whichever choice players make, boarding Sims in close proxemity to each other is destined to spur more domestic management duty from players. Fortunately, gamers have the ability to dismiss any Sim from their living quarters, which proves to be an invaluable ability considering the behaviors of most of your sim-mates. Whether to save players from the tedium of load screens or to concentrate on scholastics, life outside of university freezes while players are at school, making education a bit of a sequestered event.

University Life’s upgraded smartphone not only allows Sims to text, locate acquaintances, blog, and share content, but it also allows players to monitor their avatar’s social life. With college cliques split into three groups- jocks, nerds, and rebels, players are able to connect with each social circle, potentially earning access to additional benefits and Super Career opportunities. Correspondingly, three new traits- Irresistible, Socially Awkward, and Avante Garde, and well as a trio of skills help articulate the expansion’s simulation of social life. Raising your status in each group works similarly to the missions which fueled World Adventures. Players perform quests or attend specific events to build their rapport with each faction, engaging in activities such as Juice Keg Parties or playing a computer game within a computer game. 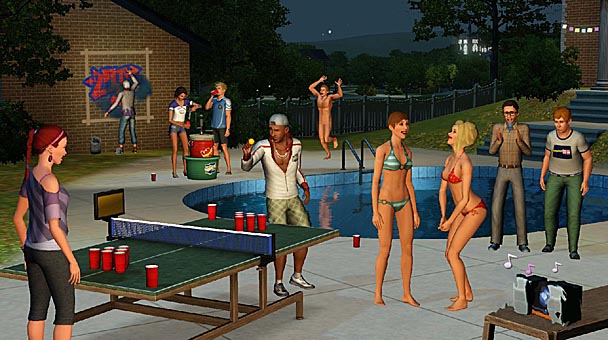 These social activities serve as University Life’s most enjoyable element, realistically drawing players away from the expansion’s main objective- attaining a degree. Cleverly, most of the educational process is done by sending Sims through rabbit holes or assigning studying sessions. For players that yearn for more interaction- lectures offer the possibility of participation, but the experience quickly becomes more monotonous than it’s real-word counterpart. Still, the conflict between collegiate mainstays such as streaking and beer pong and unexciting academics endows University Life with a stimulating tension. Woefully, Sims who are focused on hedonistic pastimes never face the threat of academic probation or expulsion. As such, there’s a notable lack of conflict in the expansion. Likewise, Maxis obviously wanted to steer clear of the more controversial aspect of Greek life. Those hoping for Animal House-style hazing and antics will have to take solace in the watered-down toga parties and masquerades found only in University Life’s limited edition.

Save for being a bit too sanitized, The Sims 3: University Life other blemish is its lack of scope. Although the expansion provides the requisite new activities, objects, and features, players may want a bit more from the pack’s recreation of college life. From sporting events which pit Sims against competitors from rival schools to mischievous acts such as raising hell while dressed as a school’s mascot, the pack misses the opportunity to become an indispensable purchase for series fans. As it stands, University Life is an amusing and often diverting recreation of academic life, but one that read like the transcript of a mediocre student- “solid effort, but never realizes prodigious potential”. 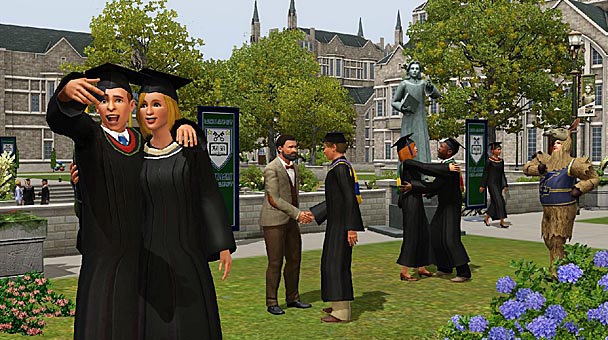