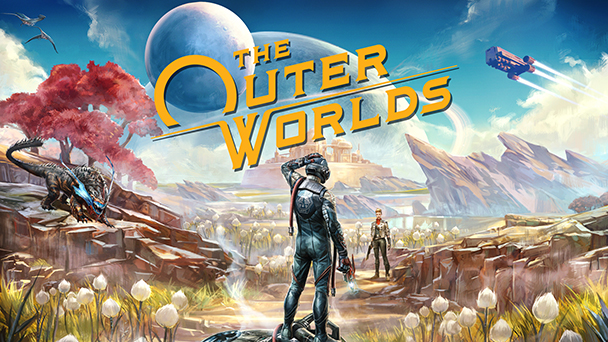 Expectedly, image quality takes a hit and load times can be a bit long. But the Switch port of The Outer Worlds does the unlikely, bringing open-world autonomy and a complex relational system onto portable hardware, which is quite a feat.

Western role-playing series like Mass Effect and Fallout strive to convey autonomy. In many aspects, they extend a praiseworthy amount of freedom. Components allow for detailed customization of your character alongside the cultivation of skills and procurement of distinctive gear. But the more time you spend exploring their epic worlds, the more restrictive and predictable they feel. There are constraints on the kind of actions you can take, with the preservation of challenge and narrative structure cited as motives. When it’s all over, your decisions often don’t feel like they had enough influence on the game’s conclusion.

The Outer Worlds’ solution is to go smaller. Instead of a fifty-hour epic, you’ll probably spend about half that duration with developer Obsidian Entertainment’s (Star Wars Knights of the Old Republic II: The Sith Lords, Fallout: New Vegas) latest effort. But that’s not a snub. It’s a deliberate shift away from the tedium of scouring desolate landscapes dotted with outposts of detail. By shrinking the world, the studio nurtures the type of nuances than can make navigating these worlds so gratifying. It also eliminates much of the padding found in these kinds of adventures. 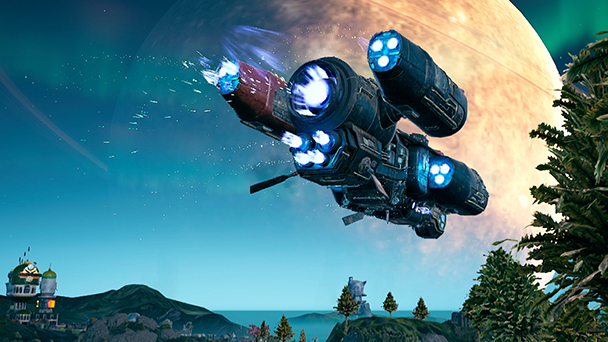 The intellect that went into Outer Worlds’ larger design decision becomes evident in the game’s prologue. Instead of the long-winded overview of context, The Outer Worlds’ setting is conveyed through a succinct cinematic. Our eyes and ears are privy to advertisements plugging the colonization of planets. Initially, the ads encapsulate the positivity that’s ubiquitous in promotion, with rising line charts and an inventory of promises spoken through cheery narration. But as the flyers float past, signs of distress waft by, ambiguously mentioning Halcyon Holdings’s ‘minor term of service’, which is corporatespeak for indentured servitude.

Players find themselves, alongside hundreds of others, put under cryogenic hibernation on a derelict craft. Aid doesn’t arrive from any company, but though Phineas Welles, who’s motivations are unclear. While there’s a warrant for his capture, he’s conduct doesn’t signal criminality. Conversely, his wild hair and darting eyes channel the look of an eccentric scientist, and his actions seem focused on saving the overlooked colonists. But he only has the resources to thaw out one- who’ll have to secure resources before reviving any more. Luckily, you’re the one awoken from the deep freeze. 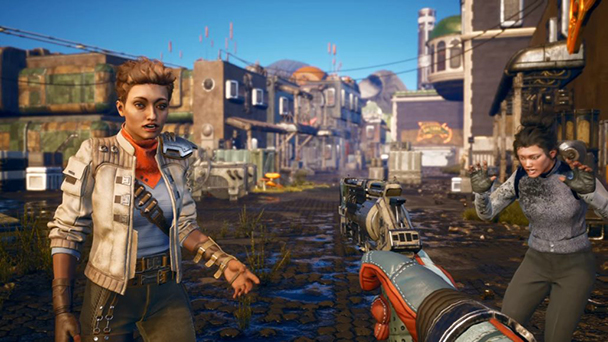 Being thrown into the Thick of Things is Exhilarating

There’s a wealth of uncertainty at the beginning of your interplanar trek that works to The Outer Worlds’ advantage. You’ll spend the first few hours desperately trying to make sense of the situation and the motivations of the characters you’ll meet, which is completely invigorating. Stick with it and you’ll see that The Outer Worlds has a lot to say about corporate power and hegemony. Importantly, its viewpoints aren’t presented heavy-handedly, but rather through touches like people incorporating marketing speak into their vernacular. Yes, Outer Worlds imagines a world where people habitually speaker like social media influencers and its completely unsettling.

Years of games that have conveyed limited amount of independence might limit how you play The Outer Worlds. Unlike the immortal ‘essentials’ in Skyrim and Fallout 3, every character can be permanently killed off, with the game impalpably reshaping the world. But just because you can slaughter everyone, doesn’t mean you will. I didn’t because I have a difficult time being a psychopath in games that don’t force you to be a murderer. But you also might not want to adopt that approach as you’ll might miss out on using enriched skillsets. But if you do wrack up a body count, just to see how Obsidian perform an impressive balancing act, I won’t judge you. 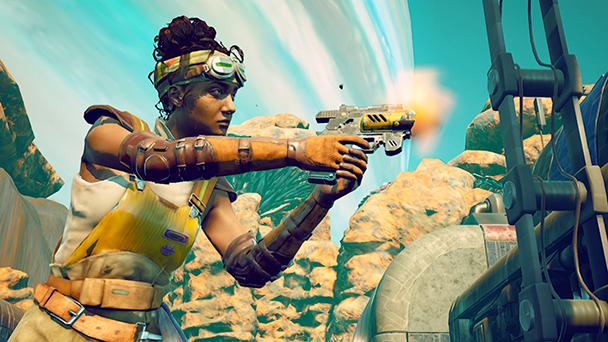 A World That Reacts to Your Decisions

Beyond melee and long-range attacks, ability categories favor alterative handling of conflict, with defense, dialog, stealth, and leadership being feasible pursuits. Pleasingly, the game isn’t stingy with upgrade points which you can pour into skills and stats. Effectively, you can walk away from hibernation as a silver-tongued charmer if you’d like. The use of skills improves your talents too, paying dividends for dedication. When you’ve mastered an area, pushing the skill level at fifty, you can then invest in sub-categories, offering a convincing interpretation of specialization.

When it comes to communicating with others, The Outer Worlds is just as sophisticated.  For one playthrough, I loaded up on intelligence and noticed I that could easily persuade most characters. To my surprise, a second run with a stout weapon-user didn’t just allow narrow down dialog choices, but often provided new responses. There’s wealth of nuance in the game and it will undoubtedly take several plays to appreciate it all. And that’s because Outer Worlds doesn’t just increase your distrust stat when you pinch someone’s possessions. Instead, there’s an intricate ecosystem that shuns the simplistic cause-and-effect approach adopted by most RPGs. 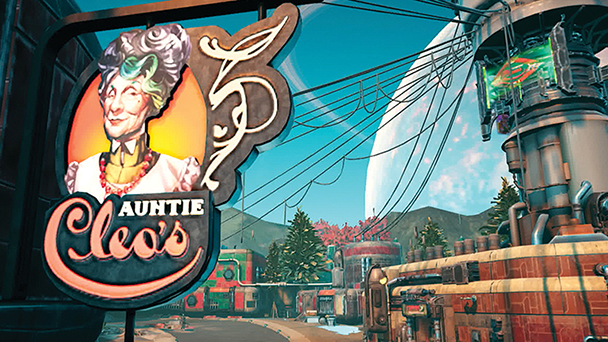 This complexity is also found in the game’s characters, who all have their own motivations and demeanors. Fascinatingly, there’s a wealth of outlooks influenced by a person’s job, vocation, socio-economic status and even backstory. If you’re accustomed to NPCs being defined most by their quest demands, Outer Worlds is going to be a very pleasing surprise. There’s an abundance of depth in characters and if you relish detail, the game’s dense star system will satisfy.

This is most evident in the game’s companions, with up to two accompanying you around the worlds. You have a bit of control over their gear, perks, and even behavior, but it’s their independence that truly separates The Outer Worlds from its peers. They’ll make astute comments about your dialog choices and decisions (depending on their personality), sporadically speak to each other or directly with NPCs, and if your moral compass is broken, they’ll leave you. Importantly, they don’t feel like a name attached to a few traits. They have personalities the emerge in both expected and unforeseen ways. Don’t be surprised if you act protectively, as the game stokes emotional involvement that a few of them. 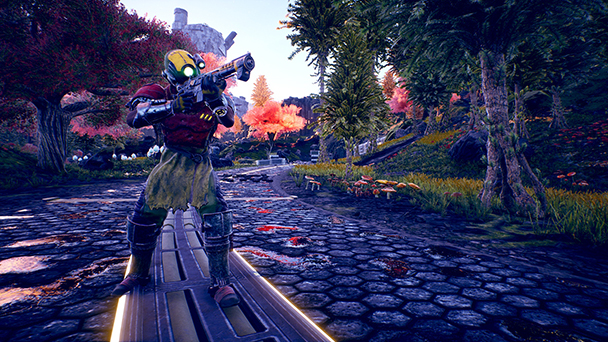 Switch Performance
When ambitious adventures arrive on Switch, the results are often mixed. Sure, titles such as The Witcher 3, Borderlands 2, and even The Elder Scrolls V: Skyrim have demonstrated porting proficiency. But other games like Rime, ARK: Survival Evolved, and Bloodstained: Ritual of the Night lacked the polish of their console brethren. Luckily, the seven month wait since the release of the PlayStation 4, Xbox One, and PC of Outer Worlds wasn’t squandered.

First the bad news. Load times are lengthy, with 20 to 30 second intervals between zones. But at least they’re not numerous. Often, you might expect a pause when opening a door and venturing out into a new area. But you’ll only encounter these waits when starting the game or moving from one major to another. When it comes to framerate, Outer Worlds does an outstanding job to striving for a 30fps in both docked and handheld mode. Sure, you’ll encounter the occasional waiver when the action heats up, but largely drops are brief and rarely plunge past 25fps. If you compare the Switch iteration with previous releases, you’ll notice drab texturing and the removal of environmental elements like trees and clouds. There’s a lack of sharpness allied to every character and environment that gradually ebbs away as your draw near.

As for resolution, you can expect 1080p while docked and 720p undocked, although the later will drop to protect the framerate. While image quality lacks sharpness, draw distances are quite far-reaching. Overall, there are a few tolerate sacrifices you’re endure for the gratification of an open-world RPG on the go. Mercifully, the developers allow you to adjust text size, which should be an option in more titles.

Battles are Better with Fictional Friends

For many, companions will prove invaluable in combat. Each has a special combat skill that just might complement your own offensive style. Initiate these and you’re be given a brief cinematic that exhibits the assault, given you as momentary breather when you are overwhelmed. That said, the delight that comes from action-based challenge is often absent from Other Worlds. Save for the highest difficult setting, you won’t have to constantly depend on the loot and modding systems to have tactical equity with your opponents. Although the ability to use science tech to make weapons that shrink enemies or make them turn on their comrades is fun, it wasn’t essential for advancement.

Tactical Time Dilation is Outer Worlds’ version of Fallout’s VATS system, with a button press slowing combat down to a crawl. Here, aiming at specific enemy parts can blind, slow, or weaken their offensive output, while weapon-specific traits can knock them out or induce bleeding. It’s an indispensable feature that elevates the excitement of combat and it’s hard to imagine the game without it. However, when these skills merge with your any existing investment in offensive output, it can make things a bit too easy. Fortunately, there’s the Supernova difficulty setting, which adds elements like having to worry about hunger and thirst alongside a lower margin for error. 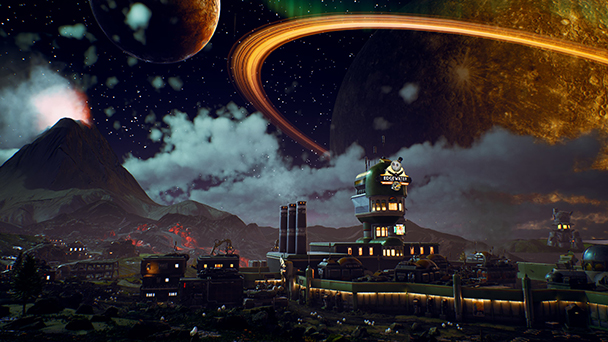 This isn’t Your Typical Bug Hunt

While your experience my differ depending on platform, Outer Worlds proved to be a refreshingly glitch-free experience on Switch. After struggling with a myriad of issues with several Bethesda-published titles, The Outer World decision to scale things down proves prudent. Although planets have a few points of exploration, the title dispenses with the tedious treks though vast, largely empty expanses. While this constrains the thrill of exploration, the scope apparently remedies the number of immersion-breaking bugs in the game. Across one and a half playthroughs, I only witnessed two trivial bugs.

These kind of open-world role-playing games have produced a legion of fans. But they’ve also inadvertently generated a growing group of skeptics, who’ve repeated been burned by the immersion-killing bugs and game-ending glitches. What’s more, these games are rarely as autonomous as the marketing indicates. After spending hours in each world, the multitude of restraints damped the trek. As such, The Outer Worlds deserves high praise, for providing an experience that provides an unprecedented blend of autonomy alongside an ample amount of polish.

The Outer Worlds (Switch) review
Expectedly, image quality takes a hit and load times can be a bit long. But the Switch port of The Outer Worlds does the unlikely, bringing open-world autonomy and a complex relational system onto portable hardware, which is quite a feat. Western role-playing series like&nbsp;Mass Effect&nbsp;and&nbsp;Fallout&nbsp;strive to convey autonomy. In many aspects, they extend a praiseworthy amount of freedom. Components allow for&hellip;

Summary : Competitors often attempt to deliver more breadth than their peers. The Outer Worlds approach favors depth, resulting in one of the best science-fiction adventures in the past few years, even if the Switch version lacks the fidelity of it's console breathren.