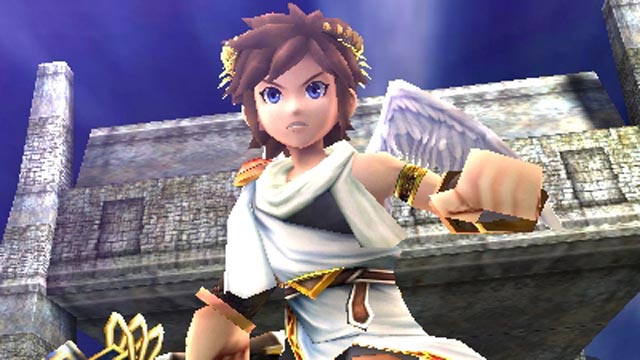 As quarter-century old NES memories gradually give way to contemporary experiences, Pit’s adventures endure. Maybe it was Kid Icarus’ remarkable mixture of platforming punctuated by a shooter stage, or possibly because the title challenged gaming convention by getting easier as players persisted. Conceivably, the game has defied being disregarded because it was so damn surreal- where else have you seen an evil wizard convert a hero’s upper body into an eggplant? Yet, despite its originality and an  attainment of cult-like status with the Nintendo-faithful, Kid Icarus’ Grecian-themed worlds have largely stagnated- save for a 1991 Game Boy sequel and a brief cameo in 2008’s Super Smash Bros. Brawl.

With the imminent release of Kid Icarus: Uprising this March, designer Masashiro Sakurai (Kirby’s Dream Land, Super Smash Bros.) has retained the cartoonish Greco atmosphere while swapping the classic title’s leisurely scrolling action for a frantic shoot-‘em –up vibe. While the title is likely to draw the ire of Pit purists, players seeking a fast and visceral experience are liable to drawn in by Uprising’s expansive arsenal and intriguing wagering system. 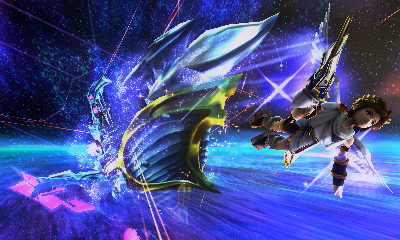 Much has been written about the game’s control scheme, which tasks players with maneuvering the protagonist with the circle pad while aiming with the stylus. Coupled with the requirement to use the left trigger to fire, Icarus demands a bit of ambidexterity from players. This is particularly apparent in the ground-based stages where players have to flick the stylus across the screen to adjust the game’s viewing angle. Yet devote a half hour to Uprising’s unconventional input method and immersion will reveal itself, eventually erupting into a feverish dance of dodging projectiles while assailing away at antagonists. Regretfully, support for Nintendo’s forthcoming Circle Pad Pro attachment is limited to balancing the playfield for southpaws, instead of offering an true twin-stick option for players.

With players preoccupied by guiding Pit, the game prudently selects from melee or ranged attacks automatically. Depth stems from the wide variety of tools at a gamers disposal. With eight different categories of weapons to choose from- with each strata being bolstered by an influx of unlockable arms, Uprising is unmistakably geared toward replayability. When combined with special abilities such as a devastating limited-use strikes and emergency health recovery, the game solicits a variety of play styles all shaped by a player’s loadout. 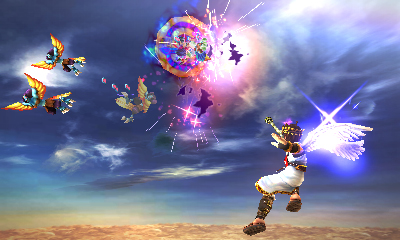 Likewise, Kid Icarus’ betting system accommodates a variety of tactics. Before each stage, players have the ability to scale the difficulty, choosing from a range of ninety discrete settings. Sliding a marker to the right sets an elevated difficulty which doles out increased currency during play. Cunningly, if players fail the level, they’ll have to reach into their virtual coffers- prohibiting exploitation. Of course, if a particular stage or boss is giving a gamer too much trouble, they can slide the marker to the left, pony up, and decrease the challenge level. In execution, Uprising’s wager mechanic should make the title accessible to a wide swath of gamers- a trait which is rapidly becoming the norm in Nintendo’s publishing efforts.

Feasibly, the sole stain on Kid Icarus Uprising’s prodigious prospects is the ergonomic factor. As titles like Metroid Prime Hunters, Moon, and Dementium II have revealed, fatigue can be an issue when pad and stylus are required simultaneously. Yet with inspired character design which pays homage to the original 8-bit characters, an assortment of customization options, intense gameplay, (and a yet-to-be reveled multiplayer mode) Uprising looks to follow Super Mario 3D Land and Mario Kart 7 as another first-party triumph which deserves a place in every 3DS owner’s library.