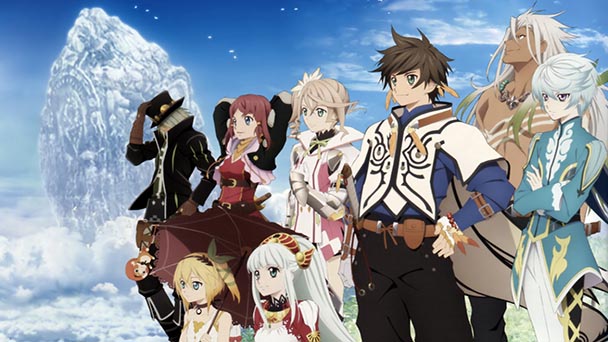 Although many might assume turn-based battles dominate the realm of role-playing, action-driven combat has a resilient foothold on the genre. Long before Mass Effect and Kingdom Hearts married plotline with sections of energetic pugnaciousness, franchises like the Ys, Star Ocean, and the Tales series demonstrated just how fantastic fluid, fast-paced, battles could be. Unlike the other IPs, real-time combat is the rare continuity in Bandai-Namco’s series, with both setting and characters habitually shifting across each subsequent entry (save for Xillia, Tales’ sole two-part entry).

Of course, if you scrutinize Tales’ fifteen game legacy, you’ll discover a few, faint thematic elements that extend across the franchise. Notably, the recent release of Tales of Zestiria revisits the compulsory coexistence of two races, with humans and the spiritual Seraphim serving as the main two factions. The bridge between these two worlds is Sorey, a good-natured young boy who was raised in a village of Seraphim. This upbringing endowed the protagonist with a high level of resonance, allowing him to see and interact with the other culture- a trait that’s uncommon for most humans. 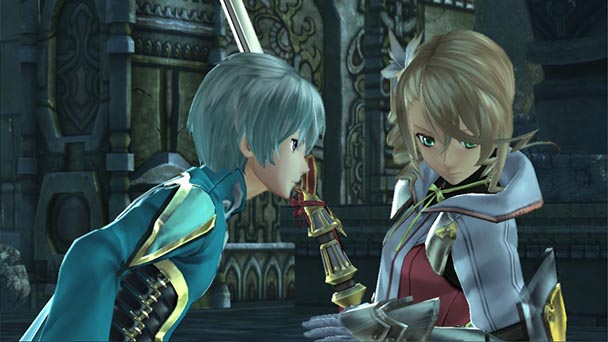 Naturally, when negative sentiment throughout the world spurs the vicious Hellion, a pandemic threatens the entire world. It’s here, that another of Tales common refrains emerges, with the game offering religious allegory. As such, Sorey must become a literal and figurative Shephard who’s tasked with guiding a populace away from the personal ills that threaten to accumulate, and eventually eradicate, humanity. Fortunately, there’s enough Eastern-centered contemplation to keep Zestiria from becoming a preachy primer in the fundamentals of Christianity.  As such, players can expect the title to wax philosophical about environmentalism, existentialism, and well as the virtues of collectivism.

Sorey is seldom alone during the heroes’ journey, accompanied by allies like his best friend Mikleo, serious-minded Alisha, or the perpetually optimistic Rose. Initially, your sidekicks might seem like little more of a collection of JRPG tropes, as evidenced by the easy application of adjectives to describe each one.  But the Tales games has always been one of the better franchises at simulating relationships, whether in the optional, but indulging small-talk sequences known as skits, or the glimpses of internal dialog that are able to transcend the outward exhibition of omoiyari. 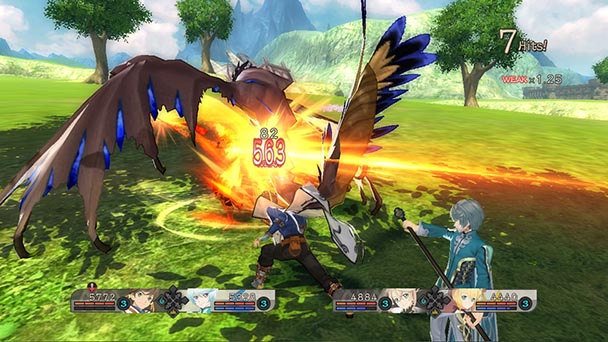 Although Tales of Zestiria delivers a protracted prologue, once players pass the four-hour mark, they’ll be contented by the game’s cast. Sorey might not display distinction from the legion of role-playing protagonists who came before him, but he is undeniably likeable. Given his amiable nature he’s able to form an easy, heart-warming bond with many of his cohorts. What’s more, his unique upbringing endows him with enough naivety and a hint of outsider status- ensuring empathy from most players. Like any commendable RPG, relationships deliver arcs- and save for Zestiria’s tendency to interrupt these when party members come and go, the storytelling is largely commendable.

Being a Tales game, narrative is complemented by the return of an amended Linear Motion Battle System (or LMBS), ensuring that the game’s cadence never becomes too laidback. Wisely, Zestiria’s design decisions ensure there’s a sufficient amount of depth to combat, without sacrificing accessibility. At first, you’ll be able to effortless four-chain combos on enemies, but before long, Spirit Chain energy becomes a factor. Depleting this resource can leave a party member vulnerable, compelling players to either guard, use the new sidestep maneuver, or just temporarily retreat during encounters. What’s interesting is that your character is most powerful just before your Spirit Chain exhausts, creating some intriguing risk/reward scenarios. 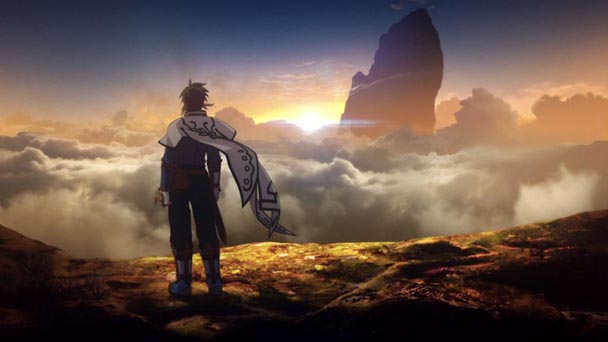 Role-playing tenets like physical and magical attacks are contextualized as Artes within Tales, and with Zestiria, characters gain a nice arsenal of these abilities as they persevere.  While conquering common enemies might be a cakewalk on even the title’s higher difficulty settings, boss battles are the consummate test of skill. Here, Zestiria not only expects mastery of the RoShamBo-system of Martial, Seraphic, and Hidden Artes, but also tests your knowledge of elemental advantages. While it might seem like a lot to take in, the game judiciously adds each new mechanic, ensuring players won’t meet a perplexing stopping point.

Unquestionably, Tales of Zestiria’s best modification is the addition of Armatization, which allows Sorey and Seraphim to fuse together, joining stats and opening up a new arsenal of Artes which deliver a bevy of visual rewards. Beyond getting an offensive advantage against bosses, Armatization also offers other possibilities, allowing for party heals and even revive fallen party members. What’s especially satisfying is the dearth of limits on the ability. Except for the removal of fused characters if you’re defeated, players are free to make the most of the aptitude, ensuring encounters are consistently enjoyable. 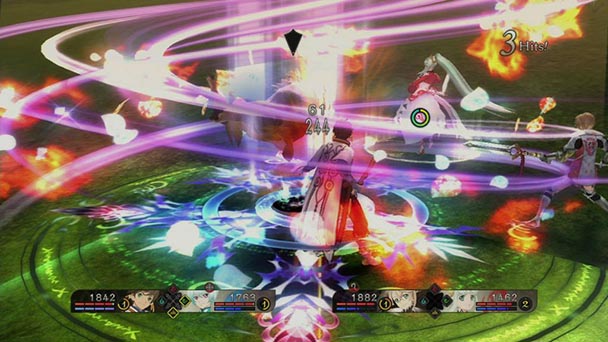 Previous Tales entries have following role-playing tradition, typically confining players to narrow paths. Zestiria attempts a more unrestricted approach, extending open areas for players to explore. In execution, the ambition is noble, with the game evading the feeling of linearity. But often areas can be a little too meager, with only the occasional treasure chest to spur exploration. The other side effect is that Zestiria’s dungeons feel a bit too sterile, simple, and short. These areas should have been a series of crests that punctuated gameplay; instead they often feel a bit too pedestrian. The other drawback with dungeons revolves around the game’s camera, which can provide an ineffective perspective when indoors.

Visually, the PlayStation 4 version of Zestiria divulges its origins at a last-gen port. From occasional pop-in and combat that’s locked at thirty frames per second, it’s apparent that the developers favored parity over now-gen prowess. On the upside, the game’s aural abilities are strong, offering sufficiently stirring melodies and voice-work in two languages. Although the English dub is solid, purists will want to play in Japanese to ensure the accuracy of character lip-synching. 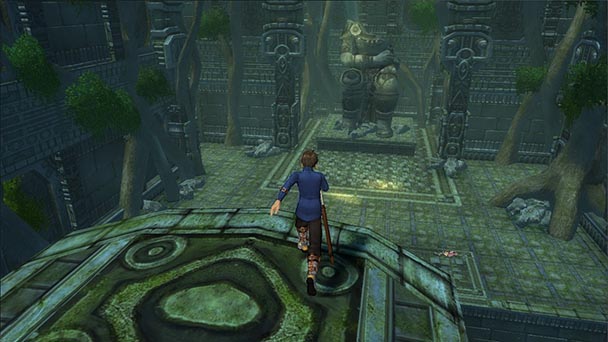 Overlook the lackluster, Japan-only release of Tales of the Tempest, and you’ll find that Bandai-Namco’s Tales series is one of the most reliable, role-playing franchises. Although there’s no interconnected storyline, each new entry explores familiar themes while advancing its rewarding combat engine. Pleasingly, Tales of Zestiria is no exception, extending a rousing, rewarding expedition that has very few problems during its extended playtime.

Tales of Zestiria was played on the PlayStation 4 with review code provided by the publisher.

Tales of Zestiria
Platform: PlayStation 4, also on PlayStation 3, PC
Developer: Bandai Namco Studio
Publisher: Bandai Namco Entertainment
Release date: October 19th, 2015
ESRB: Teen
Price: $59.99 (PS4), $49.99 (PS3, PC)
Tales of Zestiria review
Although many might assume turn-based battles dominate the realm of role-playing, action-driven combat has a resilient foothold on the genre. Long before Mass Effect and Kingdom Hearts married plotline with sections of energetic pugnaciousness, franchises like the Ys, Star Ocean, and the Tales series demonstrated just how fantastic fluid, fast-paced, battles could be. Unlike the other IPs, real-time combat is the rare continuity in Bandai-Namco&rsquo;s series, with both setting and characters habitually shifting across each subsequent entry (save for Xillia, Tales&rsquo; sole two-part entry). Of course, if you scrutinize Tales&rsquo; fifteen game legacy, you&rsquo;ll discover a few, faint thematic elements&hellip;

Summary : Memorializing the twentieth anniversary of the franchise, Tales of Zestiria maintains the merits of Bandai-Namco series, bonding story, strife, and symbolism is a thoroughly rewarding manner.