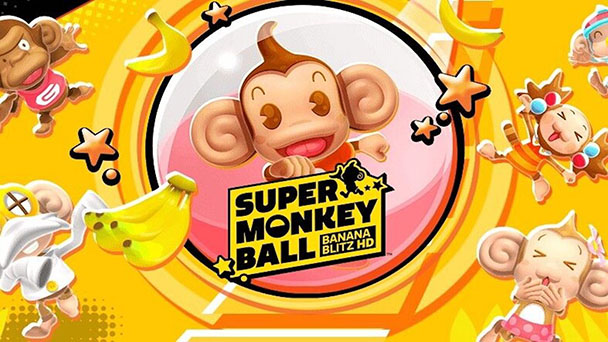 The traces of whimsy and retro-game adoration found in the Yakuza series can probably be traced back to Toshihiro Nagoshi’s developmental roots. Before directing Kazuma Kiryu’s underworld saga, Nagaoshi was head of SEGA’s Amusement Vision subsidiary, helming games like Daytona USA and SpikeOut. While those two titles were undoubtedly joyful arcade experiences, neither matched the effervescent eccentricity or immediate accessibility of Monkey Ball.

With a banana-shaped joystick and stages that dispensed a palette of vivid hues, the 2001 coin-op seized attentions. More importantly, it also had the gameplay to back up its interest-grabbing ploys. Each level tasked a monkey enclosed in a translucent sphere to roll across an elevated path filled with obstacles and hazards. Imagine a miniature golf played with a hamster ball and you’d probably have a good grasp of the core concept. 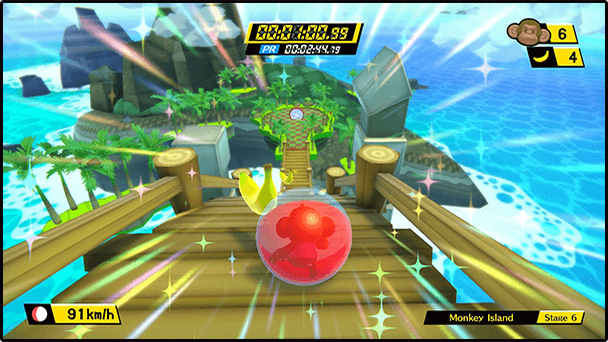 The twist was that players didn’t directly control the ball. Instead you tilted and panned the course, with gravity moving your little monkey across a succession of levels. While early stages were offered a modicum of challenge, soon Money Ball ratcheted up the tension. Platforms and peril increased, leading to ‘fall outs’ where your simian tumbled over the side of the stage or instances where the level timer expired. Both events took one of your lives.

Monkey Ball’s popularity spurred a succession of sequels, with the original coin-op receiving a GameCube port in 2001 and a follow-up the next year. Fast forward five iterations and the property made it way to the Wii in 2006 with Super Monkey Ball: Banana Blitz. Thirteen years later, the title has been given a revitalization with a HD remake for PlayStation 4, Switch, and Xbox One. Upon inspection, it’s an odd place for the property to pick things up and missing some of the constituents that would make it a definitive edition. But when development duties are handled by Yakuza’s Ryu Ga Gotoku Studio, there has to be a silver lining, right? 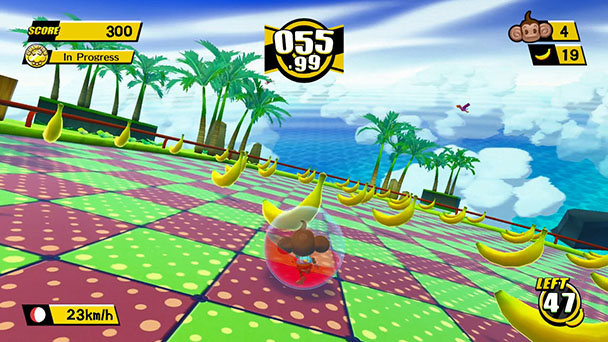 The original Banana Blitz offered two fundamental additions to the series. The first is the ability to jump, contributing a bit of navigational nuance to the proceedings. In execution, the inclusion of leaps doesn’t radically change the core formula, save for player proficiency being able to shave a second or two from completion times.

But largely, finding shortcuts has always been one of the game’s appeals. Initially, you’ll find yourself closely following a route that’s unmistakably delineated for you.  But revisiting stages will have you scouring the landscape for places you can circumvent segments of each stage. Occasionally, you might take a leap of faith, hoping to land on a pathway below. 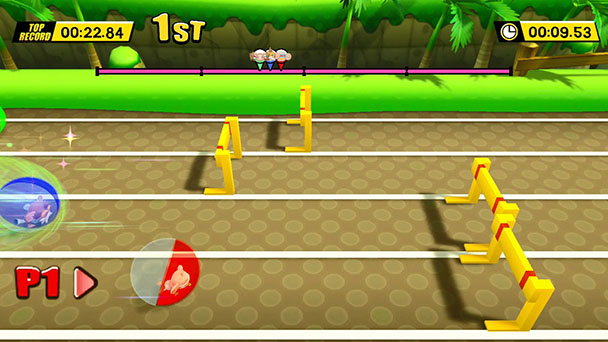 The other alteration is the inclusion of boss battles which bookend every eight chapters. These prove to be a contentious addition. While they break up the sequences of standard levels, they often induce frustration as you struggle to strike a weak point. Typically, these showdowns are highlights in games, but you likely you’ll approach these conflicts with indifference or even disdain.

Whereas the original Banana Blitz offered an abundant collection of fifty different mini-games, this remake trims that quantity down to ten. Recreations like Dangerous Route, Hammer Throw, Monkey Snowboard, and Whack-a-Mole aren’t particularly deep, but they can be a catalyst for competition when small groups of friends are around. For those without adjacent acquaintances, Decathlon keeps score across a ten-event run for bragging rights on global online leaderboards. For those who seek this kind of rivalry, Time Attack allows provides a score based on your completion time in the main game. 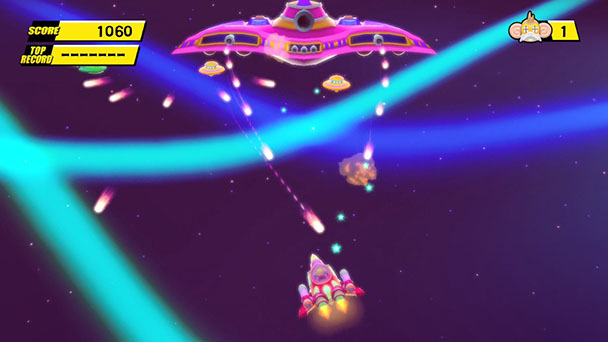 The gratification of the original release manages to shine through Super Monkey Ball: Banana Blitz HD. But it’s disappointing that Ryu Ga Gotoku Studio didn’t do more to compensate for the loss of forty mini-games. Sure, concessions like Sonic as a playable character are welcome, but their presence isn’t enough to push this remake into definitive status. Hopefully, any future reworking of Super Monkey Ball won’t have the same forfeiture.

Super Monkey Ball: Banana Blitz HD was played on the
Switch with review code provided by the publisher.

Super Monkey Ball: Banana Blitz HD review
The traces of whimsy and retro-game adoration found in the Yakuza series can probably be traced back to Toshihiro Nagoshi&rsquo;s developmental roots. Before directing Kazuma Kiryu&rsquo;s underworld saga, Nagaoshi was head of SEGA&rsquo;s Amusement Vision subsidiary, helming games like Daytona USA and SpikeOut. While those two titles were undoubtedly joyful arcade experiences, neither matched the effervescent eccentricity or immediate accessibility of Monkey Ball. With a banana-shaped joystick and stages that dispensed a palette of vivid hues, the 2001 coin-op seized attentions. More importantly, it also had the gameplay to back up its interest-grabbing ploys. Each level tasked a monkey enclosed&hellip;

Summary : Thirteen years later, the accessibility and enjoyment of Super Monkey Ball: Banana Blitz continues save for those irritating boss battles. While this remake will remind of the franchise’s charms, missing mini-games are poised to be disregarded.