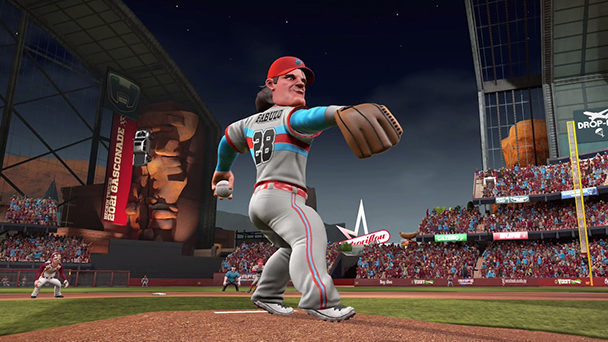 If you can get past the cartoonish looks and lack of licensing Super Mega Baseball 3‘s on-field performance means it’s a clincher on every platform, save for PlayStation 4.

Once a PlayStation exclusive, MLB: The Show is now headed to other consoles. But that won’t happen before 2021, according to developer San Diego Studio, leaving an opening for action-driven competitors. On Switch, two challengers have already gained some on-field experience. First, there’s the persistently middling R.B.I. Baseball, developed by Major League Baseball’s own in-house studio, MLB Advanced Media. And then there’s Super Mega Baseball 3, the rookie longshot, that’s hitting a stride in its third season.

Like Japan’s popular Jikkyō Powerful Pro Yakyū series, Metalhead Software’s efforts delivers a stylized take on America’s pastime. In execution, players look like bobble-head figurines rather than actual humans, and tragically, there’s no team, player, or park licensing. But take a chance on the title and you’ll discover an accessible, remarkably faithful, and thoroughly enjoyable interpretation of the sport. With the release of Super Mega Baseball 3, Metalhead’s two-year hiatus has payed dividends, adding a franchise mode that allows you to make those delightfully difficult managerial decisions. 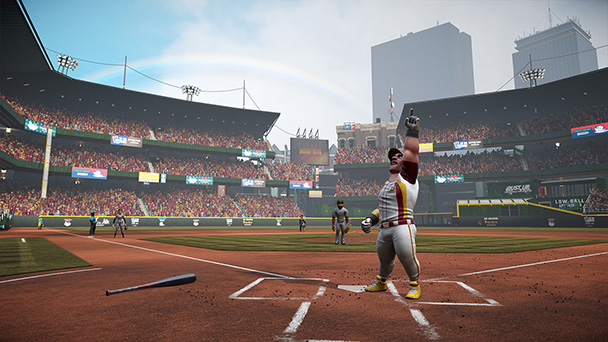 Heading into an exposition game, new season, or pennant race demonstrates the title’s mastery of the fundamentals. Take the mound and you’ll be presented with mechanics that allow virtual hurlers to quickly draw from an array of different throws. Execution involves using the right stick to select specific pitches from your players arsenal, moving the left stick to select a target, with a button press putting the player into motion. Before release, there’s a shrinking ring that determines the power of your throw, while aiming using the stick to position a cursor on a target simulates accuracy. Importantly, Super Mega Baseball pitching game finds an admirable balance between game speed, approachability, and nuance. Within a few innings, confidence will likely emerge, permitting players to focus on the classic duel between pitcher and batter.

Likewise, stepping up the plate is just as polished. Here, the batter has a targeting cursor and the ability to swing or bunt. Most importantly, Super Mega’s at-bat perspective proves beneficial for reading what’s being thrown, especially with additional data delivered through the targeting reticle. Occasionally, I’d struggle to follow the trajectory of a pitch as it travels a few scant inches down on a portable screen. But here, the speed and height between batter and pitcher allow contact with the ball consistently achievable. Sure, I still swung at stuff I shouldn’t have, but with Super Mega, I knew I was zealously chasing junk as the ball flew whizzed the batter’s box. 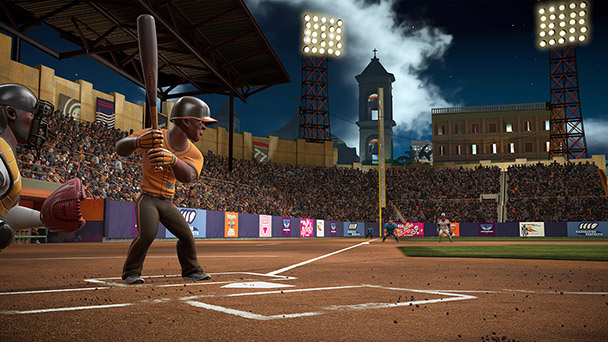 This year, fielding gets some indispensable improvements. Last time at bat, Mega Baseball 2’s AI occasionally auto-selected the wrong player during a play and sporadically, you couldn’t adjust player positioning during a pop-fly. This time out, there’s the ability to override player selection. But you likely won’t need it, as Mega Baseball 3 doesn’t a better job at giving control to the proper athlete. Likewise, when players are caught in a pickle, your AI teammates demonstrate more autonomy, so you’re more likely to nab the runner. That said, you’ll still see some gaffes out there. With the game’s new player trait system, errors are likely to happen. But now they emerge out of a combination of risk and statistic, rather than any coding oversights

On the other side of things, base stealing has been given a much-needed improvement. Now, players are able to take off as soon as a button is pressed, increasing the viability for bag swiping. To counter, a press of the directional pad can attempt to pickup a runner. If you’re fast and an athlete is attempting to steal, you might pick him or her off. But don’t think you can shake-up or even catch a runner off-guard. Mega Baseball 3’s simulation doesn’t account for these nuances. 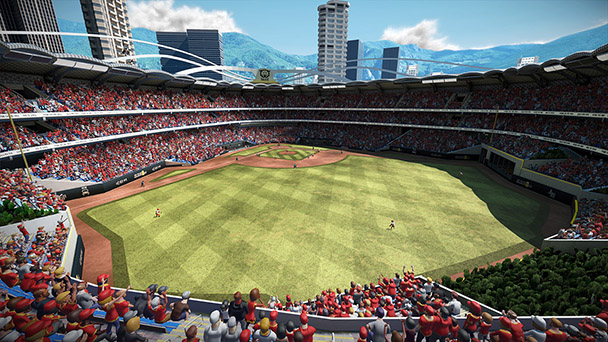 Undoubtedly, one of the series’ best attributes is the incorporation of the ‘Ego’ system, which effectively extends one hundred different difficulty levels. Before jumping into a game, you’ll set the amount, with the game subsequently making a lot of adjustments behind the scenes. One example- when you’re throwing to a base, a meter pops up over a player to determine the power of the toss. On lower Ego levels, pushing things into the red zone usually won’t cause any problems. But on higher numbers, expect overthrows to happen.

Pleasingly, the game remains reflex based, measuring the timing and accuracy of your interactions. But on higher difficulty levels, there’s many more opportunities for mistakes when battling, fielding, and pitching. It never feels like the number crunching is cheating, just that the game is expecting more from you. Another clever decision is the incorporation of scoring based on your Ego level. That way, those with no interest in competition can challenge themselves. 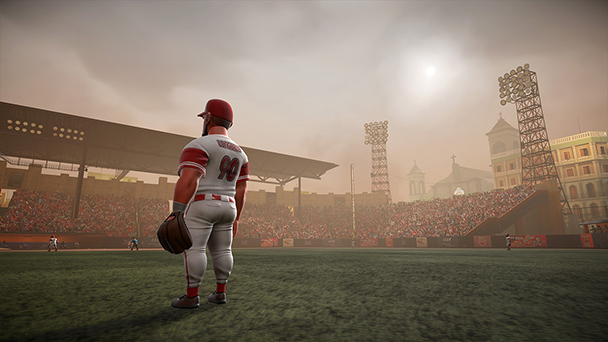 Cross-Play Across a Quartet of Platforms?

If you are seeking rivalry, Super Mega Baseball 3 accommodates. Beyond an online game against competitor on any of the game’s four platforms (Switch, PlayStation 4, Xbox One, or PC), two net-based players can take on the CPU, using dedicated servers that flaunted minimal amount of lag. Or if long-term play interests you, the game offers a Pennant Race, where you’ll be matched against 15 other online players to strive the best win/loss differential. Here, you’ll be given a separate Pennant Ego rating that evaluates your online performance.

Mega Baseball 2 had a substantial statistical underpinning, but this year’s new franchise mode ups the stakes substantially. You’ll delve into a menu-based system to facilitate player development, using your budget to augment your athletes. But you’ll always want to keep you eye on the long-term. Players age in Mega Baseball 3, with expertise tempered by slower reaction times. Over time, they’ll age out and might retire on their own. That is, if you don’t make the cut and pick up a rookie free agent. Pleasingly, player autonomy seems adept, whether it’s in salary negation or the decision to become a free agent at the end of a season. 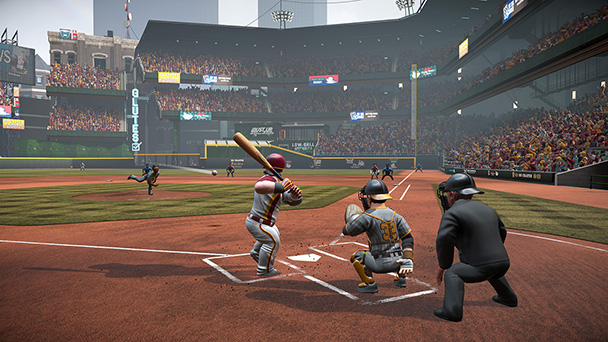 While the game’s athletes might not be rooted in reality, if you’ve played the previous Mega Baseball installments you might see some familiar names. That’s not to say that the title is just a roster rehash. You’ll find some players have moved to the four new expansion teams as well as a few new, promising rookies. It’s been years since I’ve developed an affinity for ersatz athletes, so the game must be doing something right. Another benefit is the inclusion of new sky textures that reflect different times of day, adding variability during those 48-game seasons.

With the ability to edit player names, uniforms, and logos, Super Mega Baseball 3 could almost offset any craving for an actual Major League Baseball game. The tools are moderately powerful, extending the ability to tweak designs, and more importantly, Metalhead has jettisoned last year’s pre-made DLC designs. While there’s been some worthwhile additions to players heads and equipment, some of darker skin tones look off, which is disappointing. 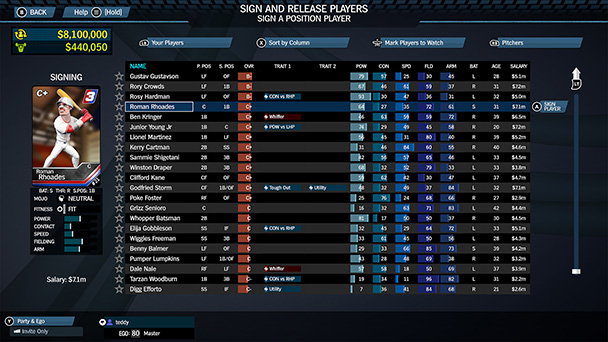 All-Star Performance, Even on Switch

In motion, Super Mega Baseball 2 is a solid performer, with nary a drop in framerate when playing in handheld mode. The game’s decision to shirk photorealism has its perks, when legions of fans sway in unison or players move with lithe fluidity. And while there are only fourteen different parks, each offers an eye-pleasing theme that makes real-like locations seem lifeless. Although there’s a bit of voice, with umpires and the occasional PA announcement, don’t expect any play-by-color or color commentary.

Given the scarcity of quality, action-driven baseball games on most platforms, Super Mega Baseball 3 comes recommended. For the price of a seat in the upper deck, Metalhead Software offers a season’s worth of America’s pastime that demonstrations an ideal balance between accessibility and nuance. While there are some minor shortcomings you need to be aware of, the integration of the Franchise system ensures you’ll pour hours in this season’s outing.

Super Mega Baseball 3 was played on Switch with review code provided by the publisher.

Super Mega Baseball 3 review
If you can get past the cartoonish looks and lack of licensing Super Mega Baseball 3's on-field performance means it's a clincher on every platform, save for PlayStation 4.&nbsp; Once a PlayStation exclusive, MLB: The Show is now headed to other consoles. But that won&rsquo;t happen before 2021, according to developer San Diego Studio, leaving an opening for action-driven competitors. On Switch, two&hellip;

Summary : Action-driven baseball games used to be plentiful. While MLB: The Show probably retains its reign for PlayStation owners, Super Mega Baseball 3 is the hot-shot underdog only lacking in name recognition. Until The Show makes its exodus from Sony’s ecosystem, this is the way to go for American baseball. Of course, check out Pro Yakyuu Famista 2020 if you’re fluent.