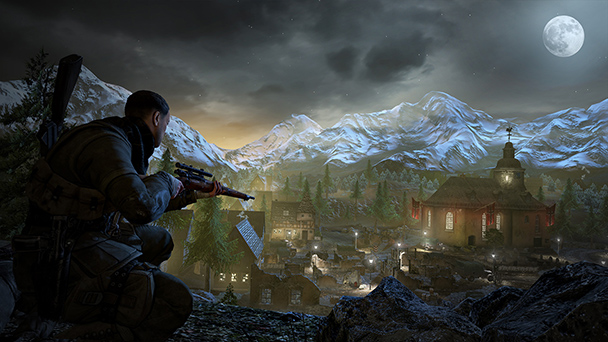 If you started playing Rebellion Developments’ Sniper Elite series on the third or fourth iteration, the recently released remaster of Sniper Elite V2 is going to feel regressive. Unsurprisingly, the latter two entries showcase a significant improvement in visual quality, with character models and locales drawn with a significantly higher polygon count.

The environment themselves were transformed from linear affairs into intricate sandboxes. Strategies habitually revolved around thorough reconnaissance, with enemy soldiers exhibiting a nerve-wracking level of artificial intelligence. No longer could you take aim at a choke point, waiting for soldiers to follow the same footpaths as their fallen comrades. Success involve meticulously stalking each landscape, as you looked for opportunities to whittle down enemy numbers. 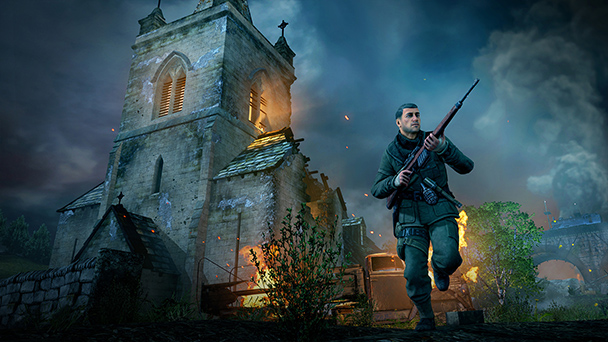 As Rebellion’s second game following the release of the original Sniper Elite in 2005, 2012’s V2 didn’t offer a number of these modern amenities. But that doesn’t mean that PlayStation 4, Xbox One, Switch, and PC versions of Sniper Elite V2 Remastered should be overlooked. There’s urgency in the smoldering build-up to the signature shoot-outs and adrenaline-producing intensity as take aim from your perch, firing rounds through the skulls of soldiers and Nazi scientists alike. If you’re lucky, you’re treated to a slow-motion replay of your long-kill where you watch a x-ray-style depiction of the bullet ripping though bone and flesh.

Part of what made Sniper Elite V2 unique was its perspective on the war. Here, you’re not some underdog chasing preordained glory. Instead, the game is set during April 1945, amidst a Germany on that would surrender in the beginning on May. Many areas are rubbled by allied bombing. While the plot details the Nazis’ attempt to build long-range, guided missiles that have the possibility of shifting the tide of war, they are scrambling. German scientists conceding defeat are deliberating defection to Russia. 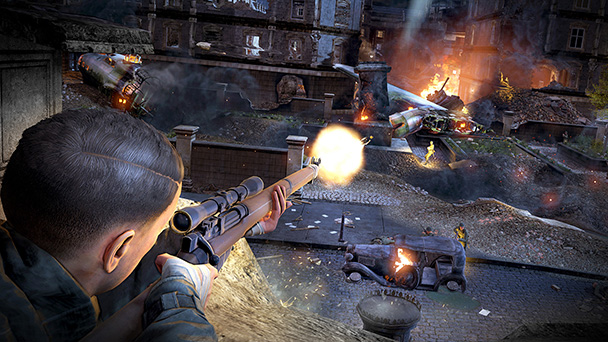 While you’re persistently outnumbered, each of the ten multi-part missions (plus the ‘Assassinate the Fuhrer’ DLC which is included with the remaster) conveys a tangible sense of progress, as if your headshots are truly undermining their efforts.

Players assume the role of Lieutenant Karl Fairburne, an American OSS officer who has been inserted into Berlin.  Sniper Elite V2’s storyline was never it’s strong point, but Fairburne’s monologue before each mission provides a concise context along with your mission objectives. You won’t feel any kind of connection to the character, but you will feel the pressure to make good on your orders and ensure that the Fairburne makes it out alive. 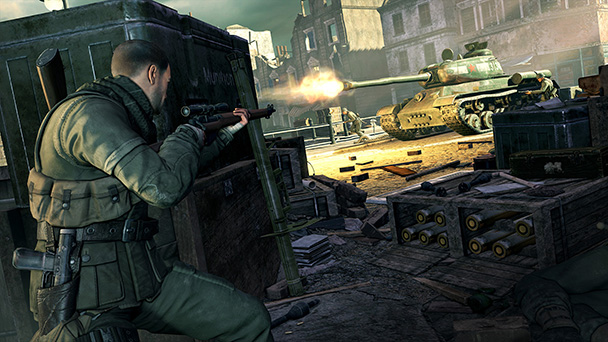 Whereas Sniper Elite 4 let you freely explore battlefields, V2 presents a much more controlled experience. That might sound restrictive, but it allows the developers to fastidiously craft stages that build up to a taut crescendo that can feel cinematic. With your sniping spots often predetermined, Rebellion retains control of the mise-en-scène. Likely, you’ll notice subtle references to Enemy at the Gates or Saving Private Ryan’s Neuville scene.

But that’s not to say that Sniper Elite V2 is a simplistic shooting gallery. Before each mission, you’re given an allotment of points that can be used for ensnarement since enemies will try to convene on your suspected position. Gratifyingly, you can spend points on land and trip mines, which not only can eradicate of enemy but also warn you that foes are encroaching. Balancing the elimination of downrange adversaries while making sure no one is sneaking up on you feels suitably unsettling. However, Sniper Elite V2 stumbled by offered the option to go loud, instead of playing it stealthy. Here, gunning down foes conveys little satisfaction. There’s a bit of design schizophrenia here too, as scare amounts of ammo encourage you to switch to your scoped weapon. 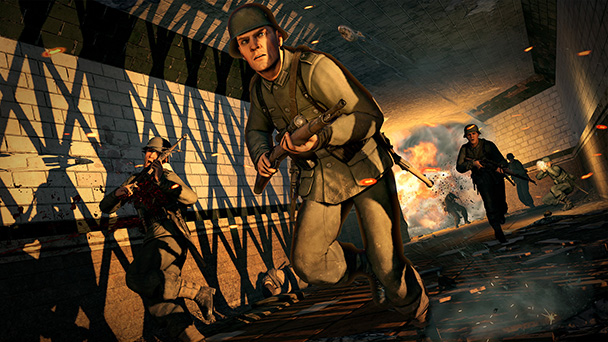 After witnessing remasters that offer scant improvement on their original output, it’s natural to be skeptical when developers reissue their properties. But this is certainly a solid effort. With resolution settings that scale up to 4K and improved textures across most of the game, Sniper Elite V2 Remastered doesn’t look like a seven-year old game. Sure, not every character, weapon, or vehicle received a polygonal boost, but essentially the game looks good and more importantly, runs well. We were able to get the game running with a steady framerate in 4K, while even a humble GTX 1050-powered laptop was able to keep up with 1080p/60fps delivery.

Like most remasters, Sniper Elite V2 Remastered improvements are mostly aesthetic. Sure, the title offers appendages a photo mode and the ability to play as characters from the Zombie Army games (but you’ll obtrusively revert back to Fairburne during cutscenes.) But gameplay remains untouched. As such, Sniper Elite V2 Remastered is best enjoyed by PC players who can upgrade from the previous version for ten dollars. For Switch owners unable to enjoy the more recent franchise outings, this is also a viable purchase.

Sniper Elite V2 Remastered review was played on PC
with review code provided by the publisher.

Sniper Elite V2 Remastered review
If you started playing Rebellion Developments&rsquo; Sniper Elite series on the third or fourth iteration, the recently released remaster of Sniper Elite V2 is going to feel regressive. Unsurprisingly, the latter two entries showcase a significant improvement in visual quality, with character models and locales drawn with a significantly higher polygon count. The environment themselves were transformed from linear affairs into intricate sandboxes. Strategies habitually revolved around thorough reconnaissance, with enemy soldiers exhibiting a nerve-wracking level of artificial intelligence. No longer could you take aim at a choke point, waiting for soldiers to follow the same footpaths as their fallen&hellip;

Summary : Sniper Elite is hands-down, the greatest long-shot franchise around. Sniper Elite V2 Remastered demonstrates the potential that would bloom once the series moved into the open world. It’s an enjoyable experience, but one that’s best for completionists.