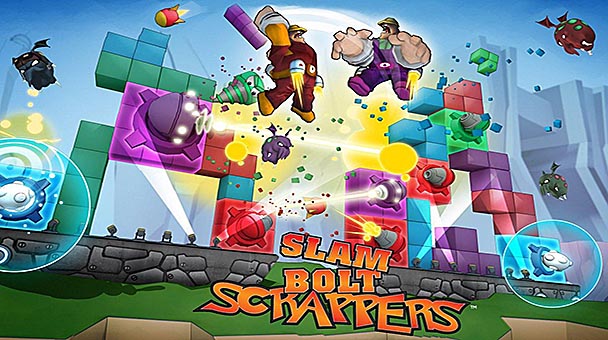 There’s a particular group of friends I catch up with every so often. We head to one of our houses, sit at the TV and play videogames. Only, since we never play party games on our own – I mean, why would you? – and since we don’t meet up that often, we’re never sure what to play. It’s normally Super Smash Bros. No, in fact: it’s always Super Smash Bros. I am terrible at it and lose every time, without fail. I am sick of losing at Super Smash Bros.

So I welcome Slam Bolt Scrappers, a frantic, colourful party game for up to four players. I welcome it partly because it could replace “that game” in our irregular meetups, and partly because my friends and I would be so overwhelmed by everything on-screen that it might level the playing field and give me a chance. Slam Bolt Scrappers is the latest offering from Fire Hose Games, who have previously worked with Harmonix on rhythm  games  but branched out a little with this one. The premise isn’t as convoluted as the encyclopaedic “How to Play” screens imply – but not by much. You control your character with the arrow keys, who flies around the screen bashing monsters (and enemy players) using strong or fast attacks, or combos. So far, so beat-em-up. 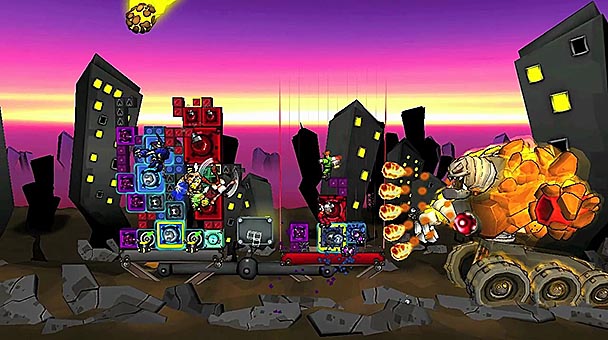 The twist is why you’re so willfully violent with your over-sized fists. When a monster dies it drops a block – the block shapes are ripped straight from Tetris, by the way – and you can use them to improve your tower. Forming a two-by-two square with blocks of the same colour nets you a weapon, which attacks the enemy tower. Forming larger squares gives you bigger weapons. Throughout the match you’re frantically trying to bash enough monsters to improve your tower, place blocks strategically to give you the biggest weapons, or kill your opponent so you have some breathing space while they respawn. Meanwhile, your tower is attacking their tower and vice versa. When one tower falls, we have a winner. Simple, right? Right? It all sounds rather complex. It is. At first I didn’t like the game much: it seemed like a bizarre videogame mongrel or Frankenstein’s monster, a mashup of puzzle games and brawlers and strategy games that could barely shamble forward on its cutesy, cell-shaded legs.

It’s true the game has a few too many features: the “move blocks you’ve already placed” feature is clumsy and difficult to use effectively, so tends to get lost in the scramble for more blocks. The fact your blocks are placed based on where your character is on-screen is a good idea, but since characters tend to swoop around it makes precision placing unintuitive; sometimes a misplaced nudge can knock that precious block one space to the left or right, ruining your tower. 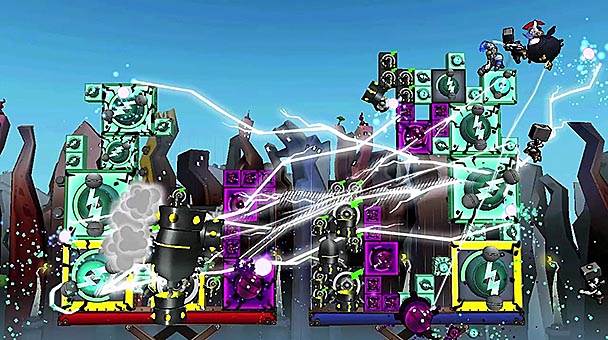 While I do like the art style, I could never love it – which would be true, I think, of most people. It’s cartoonish, complete with black outlines and a carefree font. Along with the rounded buttons and funky music, it’s the kind of aesthetic anyone could tolerate or enjoy, but never get sucked into. But that’s beside the point. This is a party game. The campaign screen – which is as singleplayer as the game gets – has slots for up to three of your friends to play co-op. It has a one-handed beverage mode. While the game is fun in its own right, its greatest asset – the thing that will make or break your experience with it – will be the people you play it with.

That’s not to say the game itself isn’t engaging by itself. It’s always fun when your opponent makes a beeline for their tower with a string of four or five blocks: you can beat them into submission and steal their precious blocky cargo. Bosses are a nice change of pace to the main game, even though their weak spots (of course they have weak spots) are hardly subtle. The commonest kind of boss might as well have a big red target on his chest saying “HIT ME HERE”. What’s impressive, though, is that they’re powerful enough to feel threatening – I died enough times while fighting them – while still being beatable: tough enough that I couldn’t help thinking “How can I possibly beat this thing?” halfway through the fight, but not so massively overpowered as to be frustrating. 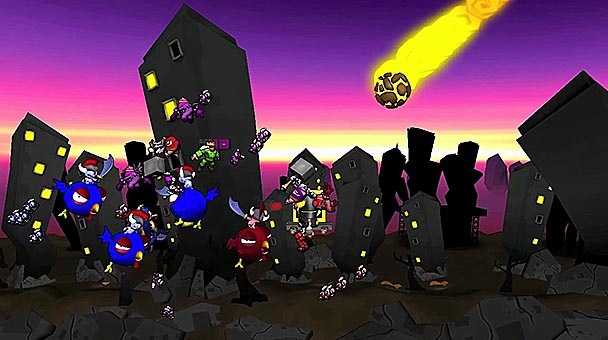 The campaign levels throw in some other juicy variations, too. The skyscraper level sees you building towers at ground level first; after a while you move up to the next floor, and so on and so on, until you reach the roof, at which point you meet the level boss. You then skip up and down the height of the skyscraper again, beefing up your earlier towers in a desperate attempt to beat him. Another level features no monsters at all, so no blocks for building. Instead, you’re faced with multiple enemy towers and ninja monsters, which bestow powerups instead of blocks when killed. Your friend here – and one of the funnest abilities in the game – is the “steal” powerup, which lets you lever a weapon from an enemy tower and place it sneakily onto your own.

To a certain extent, you can play around with the game yourself to find other permutations. How would the game play with only one colour of block? Or you could play using nothing but shield blocks and cannon blocks, the super-powered offensive weapons which can only be fired if you load them with another block? Since you can choose which blocks will be available in a given battle, you can experiment a little. 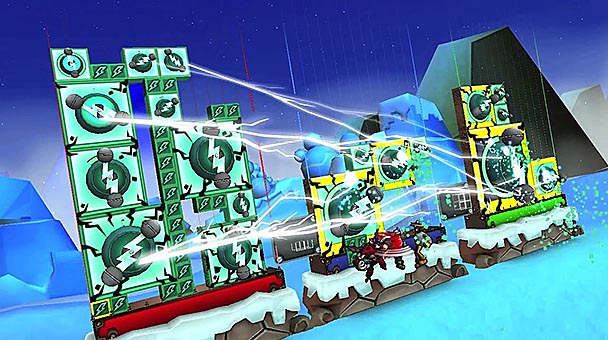 This is not the sort of game I would normally sit down and play, but it’s the sort I’d play with friends and I’d recommend it as such. The campaign mode isn’t particularly long but I’m not sure you’d want that with this kind of game. While it can seem overly complex at first, its frantic pacing is all part of the fun. What confuses me is why anyone would want to play this on PC, though: its natural habitat is hooked up to a TV, its players wielding gamepads and perched on couches – that is, on a console.

Are games art? Just what is "Indie"? How many crunching developers does it take to change a lightbulb? These are just some of the many questions that James Patton really doesn't care about, because life's too short and he'd rather replay "Symphony of the Night".