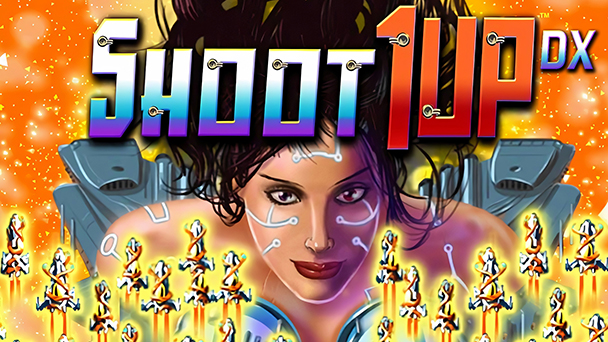 Elevated by an ingenious play mechanic that lets plays shift between a tight formation of ships or a loose formation of firepower, Shoot 1UP DX shouldn’t be overlooked by fans of the genre. 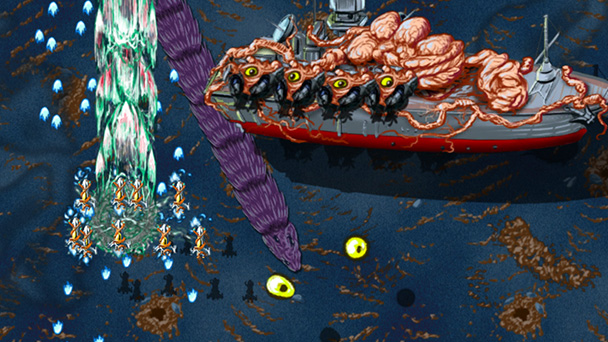 In their infancy, shoot ‘em up games (affectionately known as ‘shmups’ or STGs) challenged players with defeating waves of enemy aggressors, while simultaneously dodging their intermittent attacks. As technologies advanced, the genre grew increasingly complex, allowing each new iteration of the shmup to bring a larger amount of enemy shots to dodge. By the late 1990’s the once-popular pastime had reached its awkward teenage years, and disavowed mainstream acceptance with its uncompromising dispositions.

With this stanch focus, ‘bullet hell’ shooters where born- diversions which required players to dodge clouds of enemy ammunition with pixel-perfect accuracy. The sub-genre was pleasingly niche, with few having the dedication, time, or razor-sharp reflexes to survive screens packed with hundreds of enemy projectiles. For some, the shooter was slipping in stagnancy, more interested in awesome displays of adversity than accessibility for the average player. 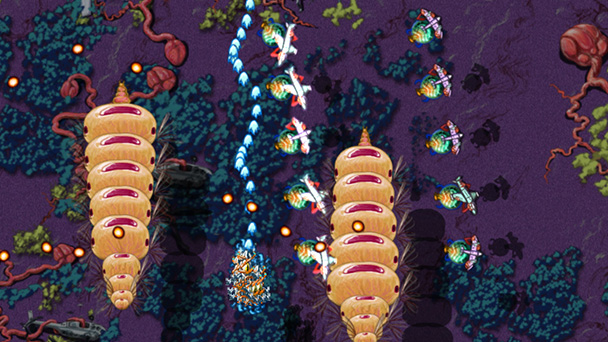 Shoot 1UP DX, an enhanced port of Mommy’s Best Xbox 360 title, offers shmup fans one of the largest doses of originality seen since 2003’s Ikaruga. The title’s hook is astonishingly simple- certain defeated foes drop extra ships. Instead of banking those spacecrafts for play once your current vessel is expired, they become part of the player’s on-screen arsenal. By using the left and right triggers, gamers can control the formation of the attack armada, endowing the game with a fascinating risk/reward dynamic. Players can dodge enemy attacks with a tight cluster or expand their collection and fill the screen with a dazzling barrage of offensive firepower complemented by a powerful plasma auger. Likely, you’ll be switch formations steadily, expanding to widen your output of firepower or shrinking when a storm of bullets rains down.

One of the game’s other innovations is the inclusion of branching pathways in each stage, allowing gamers to remain in the conventional vertical shooting orientation, shift to horizontal scrolling, or even allow free-directional movement like Technosoft’s Thunder Force series. Shoot 1UP’s power-ups are equally novel – a ghostly power-up provides gamers with a mirrored cluster of ships that are invulnerable to attack. Considering that formulations can be up to 30 ships deep (and 60 in the game’s local cooperative mode), the game often displays a tidal wave of kinetic energy. While the game’s artwork is imagative (especially some of the boss designs), the 4K output in this iteration isn’t quite as noticeable as three-dimensional titles. But, the game’s unwavering sixty frame-per-second output is commendable. 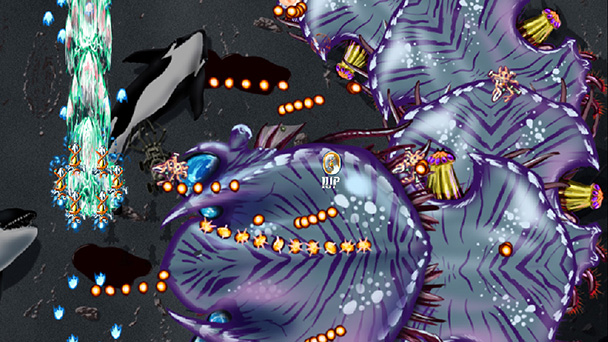 Yet only on the game’s ‘serious’ difficulty does the title ever approach the impenetrability typically associated with ‘bullet hell’ shooters. On the game’s merciful levels of difficulty, Shoot 1UP DX doesn’t require the surgeon-like precision in order to see the game’s closing credits. As such, gratification comes from achieving high scores and the brief obliteration of every on-screen enemy rather than managing continues or finding the ideal attack pattern. While some might say that the title’s experience is too brief (the game’s 8 stages can be completed in about 40 minutes), there’s enough novelty and distinction to support multiple playthroughs. This is a shooter you’ll want to have permanently installed on your PlayStation, ready to blast the day’s troubles away.

Shoot 1Up DX was played on PlayStation 5 with
review code provided by the publisher.

Shoot 1Up DX (PS4/PS5) mini-review
Elevated by an ingenious play mechanic that lets plays shift between a tight formation of ships or a loose formation of firepower, Shoot 1UP DX shouldn&rsquo;t be overlooked by fans of the genre. In their infancy, shoot &lsquo;em up games (affectionately known as &lsquo;shmups&rsquo; or STGs) challenged players with defeating waves of enemy aggressors, while simultaneously dodging their intermittent attacks. As technologies advanced, the genre&hellip;

Summary : With an affordable price and plenty of delightfully hectic action, Shoot 1UP DX is one of the better Western-made shoot 'em ups found in Sony's library.

Previous: Sword of the Necromancer review
Next: Natsuki Chronicles review