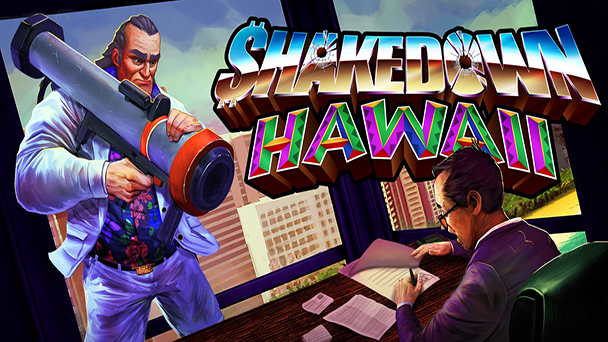 There are several satisfyingly subversive elements in Shakedown Hawaii, Vblank Entertainment’s second open-world action game. The game’s aging, once-wealthy protagonist once celebrated stagnancy by writing a book entitled, “My Company Runs Itself: I’m at the Beach”. But his technological foothold has lost its grip and the residual checks have dried up, pushing his empire into bankruptcy. Shakedown Hawaii’s gameplay revolves around a last-ditch effort to salvage your island-based holdings.

But this isn’t a tale of a good-natured underdog rightfully reclaiming his holdings. No, you’re a malicious, amoral jerk who has no qualms hurting or deceiving others to stage a comeback. And Shakedown shows that its amazingly fun to be a bad guy. 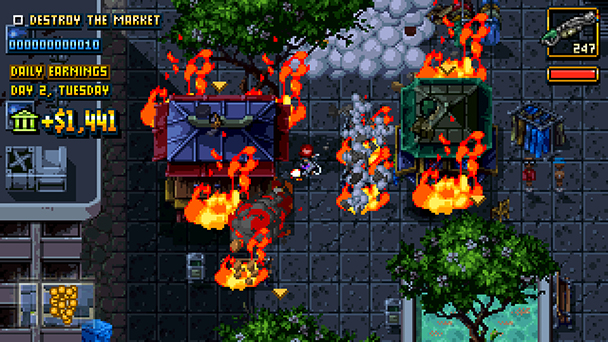 What follows is a rapid-fire succession of malicious schemes. Shakedowns refer to persuading store owners to pay a bit of protection money. After articulating your demands to the proprietor, you’ll be tasked with a multitude of different intimidation techniques. Sometimes you’ll have to damage the outside of the building while fending off police. Other times, the seemingly innocuous patrons will turn on you, and you’ll have to defeat them all to gain leverage. Once you do manage to takeover a business, you’ll be rewarded with daily income, which can used to purchase property on the map.

But that’s not the only illicit activity you’ll be involved in. You’ll blow up package delivery trucks, terrorizing the island’s major online retailer. Consumers often get the shaft from your actions, with soda not being filled to capacity in bottles, or rebate forms being rejected by ridiculous stipulations. Vblank’s previous title, Retro City Rampage incorporated a lot of referential humor that hasn’t aged so well. But with Shakedown, the comedy centers around corporations sticking it to consumers. It’s doubtful this stance will lose relevancy any time soon. 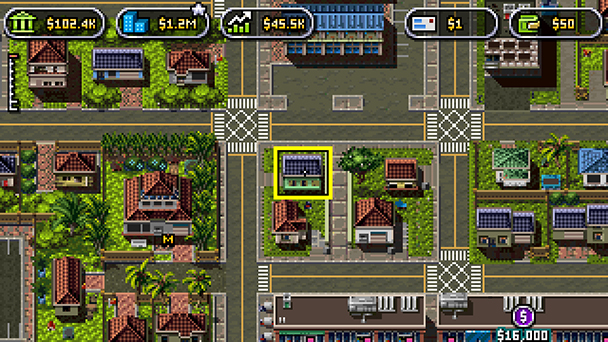 Control is rooted in two different navigational methods. Hop into a vehicle and you’ll enjoy a healthy amount of precision thanks to a pair of control schemes. Whichever you choose, you’ll be able to weave through traffic like a top-tier stunt driver. On foot, things are naturally slower, but you’ll have access to the game’s full range of weapons, from shotguns, flame throwers, to automatic rifles. Shakedown Hawaii uses a lock-on system that automatically aims toward the nearest threat you are headed toward. I do wish there was a button that would freeze your firing angle, though. It’s hard gunning down those pesky police who are in perpetual pursuit.

You’ll take control of different characters in Shakedown, temporarily shifting to the perspective of the lead’s son or a business acquaintance who must mow down an entire cartel. But the change feels like a missed opportunity, since each character plays the same and shares the same loadout. On the upside, the game offers arcade challenges which boil down some of the game’s most fun and frantic bits into standalone score chases. 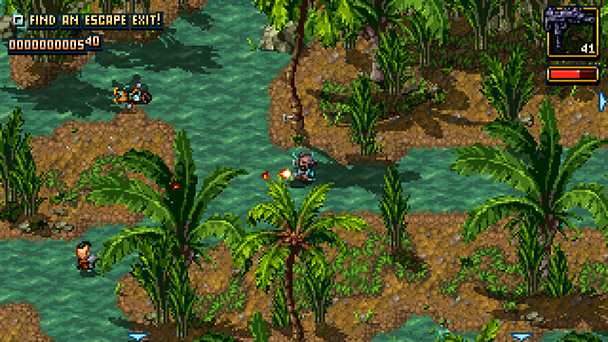 But arguably the game’s most radical constituent is its sales approach. For twenty dollars, you get at least twenty hours of over-the-top enjoyment without any irksome loot boxes or downloadable content. Chased other revenue-generating tactics probably would have undermined the jokes and made your own in-game pursuits rather ironic.

Visually, the game improves of the eight-bit look of Retro City Rampage, with a style that pays homage to the SNES/Genesis era. But when the action heats up, dozens are sprites are shifting around the screen, which would have pushed the consoles of old into flickering fits of slowdown. Fans of synthwave will appreciate Matt ”Norrin Radd” Creamer’s buoyant soundtrack, although you might have to make some adjusts in the sound menu to ensure the riffs aren’t overpowered by Shakedown’s sound effects. 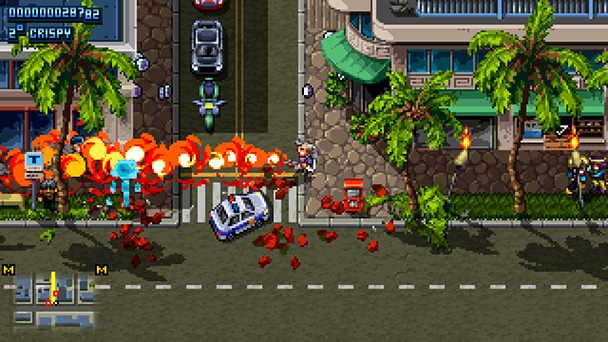 Being the bad guy is oddly compelling. Shakedown Hawaii understands this, bringing an array of pugnacious tasks for you to perform. While the currency is virtual, it’s also quite addictive to see an ever-increasing sum of money being added to your coffers, transmitting the allure of power. I didn’t want to be a belligerent jerk, taking control of the island economy by force. But I did, without even a tinge of regret. Likely, you’ll have no shame either.

Shakedown Hawaii was played on PC with review code provided by the publisher.

Shakedown Hawaii review
There are several satisfyingly subversive elements in Shakedown Hawaii, Vblank Entertainment&rsquo;s second open-world action game. The game&rsquo;s aging, once-wealthy protagonist once celebrated stagnancy by writing a book entitled, &ldquo;My Company Runs Itself: I'm at the Beach&rdquo;. But his technological foothold has lost its grip and the residual checks have dried up, pushing his empire into bankruptcy. Shakedown Hawaii&rsquo;s gameplay revolves around a last-ditch effort to salvage your island-based holdings. But this isn&rsquo;t a tale of a good-natured underdog rightfully reclaiming his holdings. No, you&rsquo;re a malicious, amoral jerk who has no qualms hurting or deceiving others to stage a comeback.&hellip;

Summary : With accessible open-world action delivered across bite-sized missions, Shakedown Hawaii offers an entertaining and highly fictionalized trip to the best U.S. state. Like a real trip to the islands, you’ll love almost every minute of the journey.