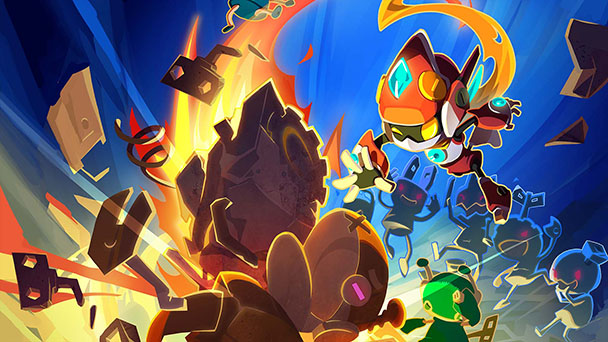 Scrap Rush is built around two irresistible pastimes: collecting junk and crushing your opponents. The former is littered across each of the game’s gridded battlefields. Small pieces of discarded metal are contained in blocks scattered across the battlefield. Occasionally, it’s ceremoniously dumped in the arena, prompting players to charge in, with magnetics attacked the tiny pieces.

Despite its humble moniker, not all scrap is insignificant; you’ll intermittently grab gold pieces that have a higher value. At the end of each game, any scrap collected becomes deposited into your account. Accumulate enough and you can purchase new color schemes for your avatars, stages, and even block types. At the end of Point Matches, the player who amasses the most junk wins, with a bonus given by the number of rare gold pieces you’ve collected. 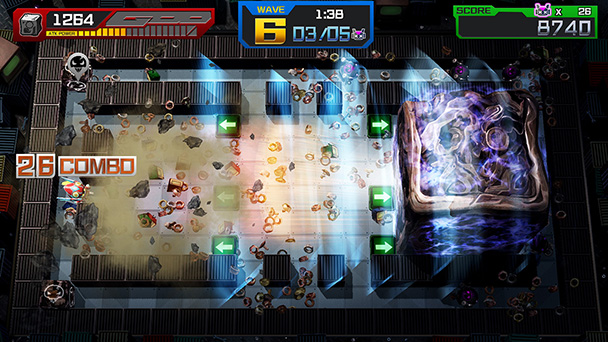 Between a Rock and a Hard Place

Blocks are the basis for the second activity, with players sliding the giant chucks in hopes of squashing your rivals. This is accomplished by holding down the charge button. When its released, blocks are sent sliding in one of cardinal directions. If your aim and timing are precise, you’ll pin an opponent into the wall or another block, earning half of their scrap for the feat. Smartly, there’s a small number fixed to every avatar, detailing the amount of scrap they are carrying. That way, you can target the most overburdened opponents, seizing their supply of resources.

Cleverly, sliding blocks aren’t the only interaction in Scrap Rush. There are instances where you might not have the need or time for a charge push, and different button presses allow for single-space and triple-space shoves. While new blocks regularly fall onto the playfield, sometimes you’ll want to summon one to squash a foe. This can be done with another button press, but it will cost you a bit of scrap, to thwart overuse. You’ll also have to be positioned just right to create a block. Sporadically, you’ll have an opportunity to jam up an adversary. It can be frustrating when the game displays an icon telling you that a block can’t be generated because of how you are situated. 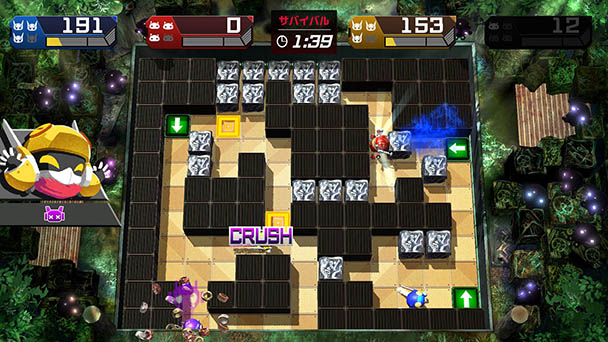 Like the Bomberman franchise, there’s a multitude of variations to help play from becoming tedious too quickly. Pick-ups provide a bit of augmentation for your avatar, with assists that do things like increase the strength of your scrap-collecting magnets. You’ll also find and unlock different types of blocks. Red ones denotate, stunning anyone caught in their blast radius, while blues will slow nearby competitors. There’s also gimmick tiles spread across each arena which can do things like warp players or even steal half their scrap. Potentially, arrow titles are the most interesting, sending block and players shooting off in a specific direction. When these are present, Scrap Rush flaunts the kind of crazy, chain reactions require you to think about your every move.

There’s also variety found in the game’s play modes. Challenge offers a ten-stage procession again increasingly adept AI, punctuated by an entertaining boss battle. Often, these kinds of arena-based titles have a lackluster single-player element, which has been a chronic issue with the Bomberman series. Although Scrap Rush’s story is still skeletal, tackling the Challenge mode is a bit more enjoyable that the usual bot-battling thanks to different game types and your ability to respawn in matches. 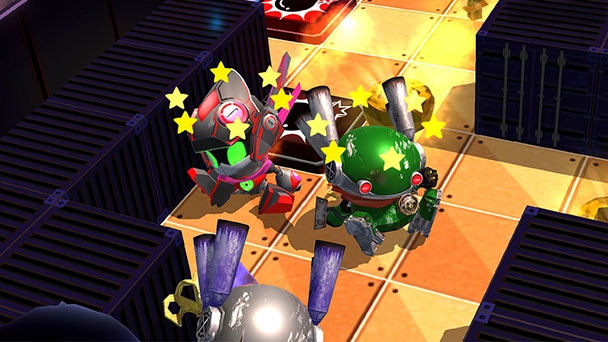 A Multitude of Game Modes and Match Styles

Beyond the aforementioned Point Matches, where players compete to accumulate the most scrap, Survival Matches hinge on outlasting opponents. Scrap Battles have areas in each part of the playfield where rivals deposit scrap. With the ability to steal from your opponents’ storeroom, these are lively affairs and thrive when playing against human opponents. Sadly, your rivals must be local, Scrap Rush doesn’t support any kind of online play.

Which is disappointing because the game’s Battle Mode offers an assortment of deviations that could generate some enjoyable net-based competitions. Beyond players having access to multiple block-based weapons, a variety of stages encourage different play styles. Some permit participants to charge push across the entire playfield, while others lure rivals into trap filled zones. Ties are even settled in special deathmatch stadiums, making for intense rivalries. Sure, you can play with bots or goad your friends into buying copies of the game, but I suspect most people would enjoy the ease of an online match. Beyond that issue, being able to skip the post-battle animations would be very welcome. 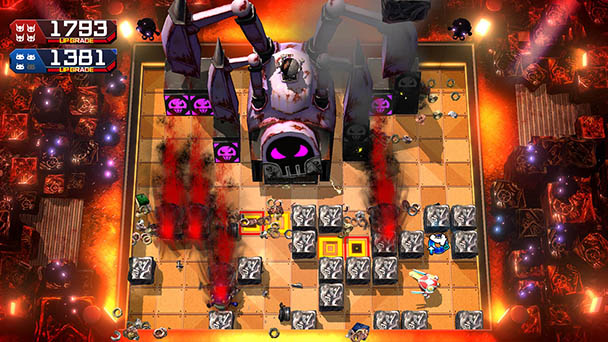 Although Scrap Rush can’t dethrone Hudson Soft’s bomb-tossing classic, it comes much closer to recreating the revelries of Bomberman than almost any other title in the last decade. Given the game’s reasonable fifteen-dollar price and the amount of enjoyment found in collecting scrap and overwhelming opponents, Acquire’s (Octopath Traveler, Akiba’s Trip: Undead & Undressed) latest shouldn’t be overlooked.

Scrap Rush!! review
Scrap Rush is built around two irresistible pastimes: collecting junk and crushing your opponents. The former is littered across each of the game&rsquo;s gridded battlefields. Small pieces of discarded metal are contained in blocks scattered across the battlefield. Occasionally, it&rsquo;s ceremoniously dumped in the arena, prompting players to charge in, with magnetics attacked the tiny pieces. Despite its humble moniker, not all scrap is insignificant; you&rsquo;ll intermittently grab gold pieces that have a higher value. At the end of each game, any scrap collected becomes deposited into your account. Accumulate enough and you can purchase new color schemes for your&hellip;

Summary : Scrap Rush!! feels like an inspired merging of Bomberman and Coreland’s classic coin-op, Pengo. While there’s just enough content for solitary players, groups of local players will have a smashing good time.