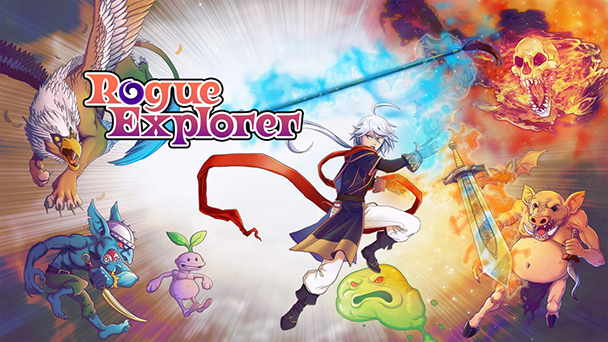 Rogue Explorer is like a transparent analog watch, where delight comes from the seeing how all the miniature pieces and gears work together in unison. If you appreciate games that drip-feed a sense of discovery, and don’t mind a bit of repetition, this affordably priced effort will gratify. 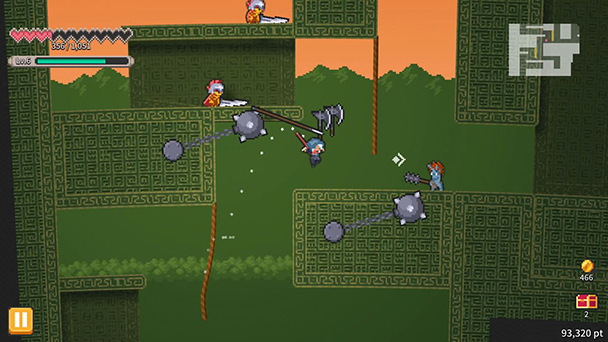 Grinding is contentious matter in gaming. For some, the repetition of tasks is enjoyable or at least tolerable, if there is sufficient compensation. But others see the process as a thankless endeavor standing in the way of your goals.

As such, Zoo Entertainment’s Rogue Explorer is posed to be a divisive title. Players might resent repeatedly leaping and lashing their way through the game’s stages in an effort to secure permanent stat boosts. Compounding that issue are a few vexing blemishes. From wall leaps that aren’t quite as responsive as most 2D platformers to lag on the rewards screen, the title could use a bit more polish. 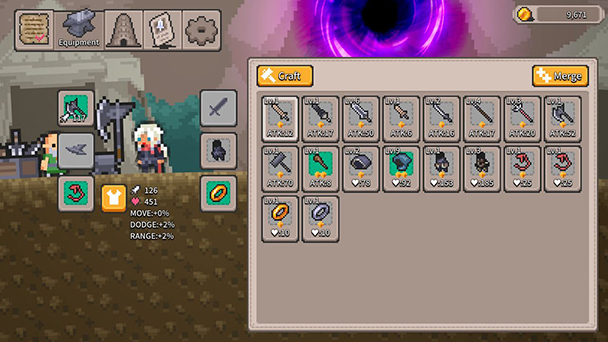 But as Rogue Explorer revealed new facets, I become enamored by the title. Admittingly, the game makes a rather curt introduction. Sure, there’s a tutorial level, but it only imparts the fundamentals of play. You’ll learn that jumping on top on enemies can injure them. Alternatively, you can toss the two blades you begin the game with a short distance, which is less risky way of dealing with adversaries. But most of the game’s nuances will be discovered through experimentation.

Like most roguelikes, you’ll use currency gained in the labyrinthine levels to augment your weapons and well as purchase upgrades to your health and attack power. But other advantages you’ll have to learn on your own. On a whim, I traded by leveled up sword for a basic staff. Sure, the pole didn’t hit as hard, but its reach allowed me to strike treacherous plants before that could fling a fireball at me. While cultivating a character is satisfying, absorbing how the game’s systems all fit together is even more gratifying. I really enjoyed learned how to maximize the efficiency of my weapon’s auto-attacking abilities. 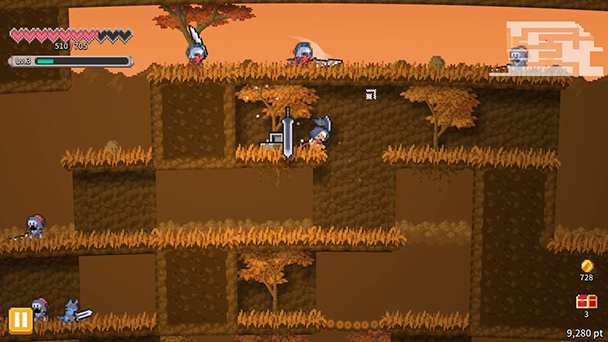 My Heart is Substantial, But Also Quite Fragile

In the interest of not sullying Rogue Explorer’s experience, I won’t detail the other veiled secrets of survival. But it’s not a spoiler to discuss some of the game’s obvious details. While the long row of hearts at the top of screen, might seem like the hero’s journey will be a cakewalk. But Explorer will remind you just how dangerous the exploration of the Abyss Tower really is. Even split-second contact with an enemy or an imprecise head stomp can remove one-third of your health bar. Bosses are even more dangerous and if you haven’t power-leveled, one-hit kills are possible.

Additional experimentation is found in the selectable perks you’ll earn every time your character levels up. While you won’t get to keep them if you die or even if you complete the stage, there’s a wealth of different abilities to try. Some increase your damage at full health, others amplify it when you’re low on health. There’s enhanced damage, double jumps, and all kind of novelties. The game offers three of them at each level increase and narrowing down your selection to a single incentive can be tough. 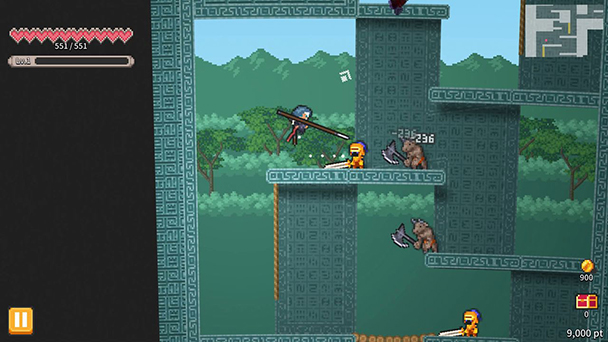 A Bit of Mid-Game Monotony

Like many roguelikes, the sense of momentum will occasionally waver. Before long, the laws of roguelike inflation kick in, making the next level of enduring upgrades seem like a chore. The genre’s best efforts provide a bit of incentive after a failed run to keep you engaged. Rogue Explorer can be on the frugal side, which shortened some of play sessions. I’ve always like roguelikes that make you neglect everything but breathing, eating, and bathroom breaks, which probably isn’t healthy.

As such, you’ll have to find the will to press on, even when the dividends aren’t as appealing. In keeping with formula, you can combine surplus items and schematics to craft upgrades, but the task doesn’t quite deliver a sense of reward. At the risk of sounded entitled, I appreciate when a game provides players with a palpable compensation for their efforts. Habitually, Rogue Explorer is a bit too stingy, like a boss who buys you an ice cream for working a double shift. As you persevere, the game’s environments are littered with traps, and dammit, I expect hazard pay! 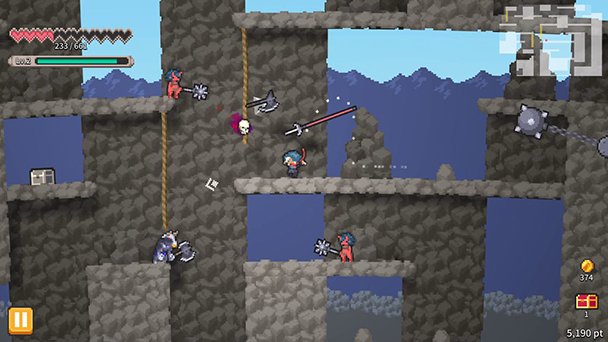 Built on the Unity engine, there’s a handful of negligible performance issues outside of play, such as menus that take a second to update. On the upside, Rogue Explorer produces competent visuals, with distinct milieu, miniature monsters, and an effect that mimics playing on a curved CRT screen. Although there’s not a lot of text in Rogue Explorer, the localization is rather rough. From terms like “Equipment off” (instead of “Unequip”) to instance of Kanji showing as options, it’s never debilitating but it is sloppy.

Largely, any transgressions are offset by the game’s affordable price. Sure, the music loops a bit too frequently, but it seems manageable for a game that costs less than a combo meal. Players with persistence who enjoy learning through experimentation can find quite a bit of delight concealed within the Abyss Tower.

Rogue Explorer review
Rogue Explorer is like a transparent analog watch, where delight comes from the seeing how all the miniature pieces and gears work together in unison. If you appreciate games that drip-feed a sense of discovery, and don&rsquo;t mind a bit of repetition, this affordably priced effort will gratify. &nbsp; Grinding is contentious matter in gaming. For some, the repetition of tasks is&hellip;

Summary : There’s a swarm of roguelike titles on Switch. Rogue Explorer’s distinction is rooted in its retro-style jump-and-slash action as well as a pleasurable sense of discovery.