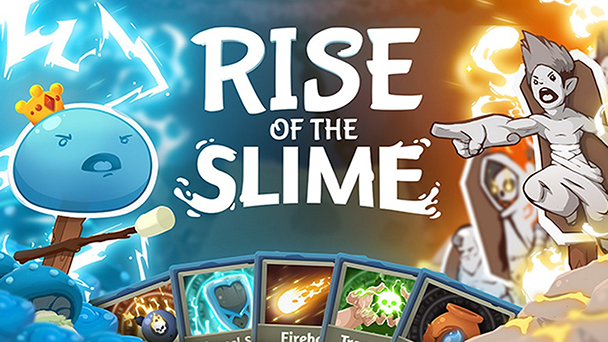 Tired of being role-playing fodder, slime strikes back at meddling adventurers in this deck builder. With modes that scale to accommodate novices to pros, Rise of the Slime is a gratifying experience for almost any skill level. 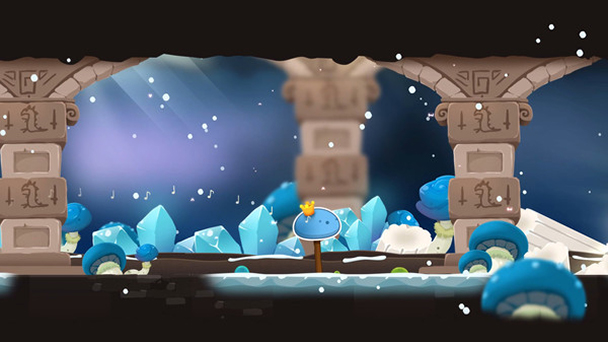 The fusion of card-based games, light role-playing elements, and roguelike qualities has proven fruitful. Across Darkest Dungeon, Slay the Spire, Monster Slayers, Griftlands, Monster Train, and a host of other titles, moment-to-moment play centers on the tough decisions of turn-based combat. But on a macro level, players must also strive to build an effective deck of cards that’s versatile enough to take down any foe. Although each of the aforementioned titles provides their own distinctive take on the basic formula, they share a common trait: none of them are especially welcoming to newcomers.

Sure, seasoned TCG veterans will quickly comprehend the fundamentals of these games. But players who haven’t tackled a multitude of deck builders will likely be forced to sacrifice several hours of their undivided attention to learn the basics. Rise of the Slime adopts a different approach. Here, a plucky slime’s journey across horizontally scrolling battlefields is refreshingly accessible. Pleasingly, you’ll learn while playing rather than being forced to read a seemingly endless succession of tutorial screens. 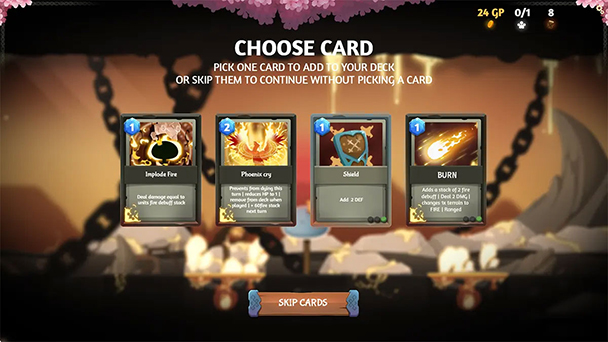 Deck Building without the Constant Interruption of Instruction

But gradually Slime adds enough complexities to maintain interest, even for deck-building pros. Naturally, the age-old tension between mounting an intense offense and keeping a secure defense emerges early. You’ll soon encounter new cards, environments, light puzzles, storefronts, and the decision between two mutations that will likely influence your playing style. Inevitably, tedium will set in, but not before you’re tried different decks and developed an inventory of strategies for dealing with the heap of randomized adversary faced by the game’s stalwart slime.

Whether you opt to play Rise of the Slime with a mouse or controller, the game’s user interface is mostly efficient. Sure, I’m not sure why I have to associate the ‘end turn’ card with the protagonist but selecting a card and a target is intuitive. Wisely, movement outside of combat is rendered in real-time. Not only does this design decision keep the pacing lively but evokes the simplicity of a side-scrolling game. Occasionally, the game even flirts with action-puzzling, as you do things like smash traps with explosive urns. It’s about as deep as pavement puddle but does provide a change of pace. 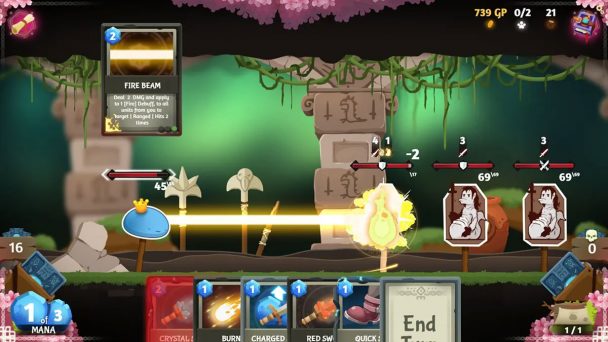 Slime is no Puni Pushover or Easily Defeated Dogoo

Once you do encounter a group of foes, Slime shifts to a turn-based approach, as slime and antagonists move across segmented positions. Here, the card-playing costs is controlled by your supply of mana, with three points typically providing multiple prospects. Your initial deck provides a movement card every turn. This can be used to reposition the slime behind an unsuspecting enemy before playing a melee card for doubled damage. Both fire and acid attacks linger on the ground, so you’ll obviously want to flee the space to avoid taking accumulating preventable damage. As such, swapping locations with a foe feels especially satisfying. Later, Slime adds positions that can buff opponents, furthering the conflict over space.

Defensive cards are common in Rise of the Slime, and a prudent habit is enhancing shielding to protect yourself. Unsurprisingly, enemies will do the same in anticipation of your attacks. Shrewdly, the game telegraph the action of each adversary, with an icon letting you know if they’re going to adopt an offensive or defensive tactic on their next turn. Who knew that slimes were such observant combatants?

Defeating key enemies allows players to select a card from three choices, augmenting your arsenal. Again, Rise of the Slime keeps things straightforward at first, with additions to your deck that are straightforward and typically not dependent on other cards on hard. But gradually, sophistication is introduced, and you’ll be privy to pets that can act autonomously, while plague can wreak havoc on the game’s bosses. As the abilities and health pool of enemies escalate, immunity cards become increasingly helpful.

Advanced players will unlock new starting adventure locations or can opt for Short Mode, which increases the level of challenge for a concise game, others will journey across Old Path. Rise of the Slime’s runs can last between 45 minutes and two hours, as you steadily supplement your deck. Elements like opting for mutations that swap your mana and HP pools can radically change the way Slime plays, bringing a dose of vitality into the proceedings. Meanwhile, less experienced players can visit the Cemetery of the Ancients, adding permanent upgrades that can tune the game’s difficulty. And while it might displease roguelike purists, other will undoubtedly appreciate the presence of checkpointing across some modes. 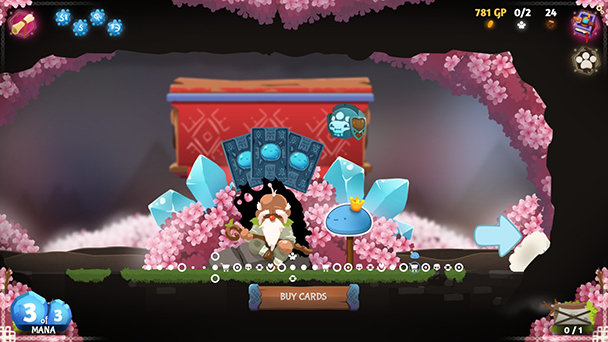 The (Puppet) Play’s the Thing

Rise of the Slime is a gratifying romp, elevated by a whimsical visual delivery that resembles a puppet show, complete with units that shimmy about on popsicle sticks. Meanwhile, Arletta Supe’s debut scoring effort is a success. While the soundtrack favors minimalism overly melodic symphonies, the decision endows the title with distinction and ensures ear fatigue won’t happen from listening to a small number of tracks that are indefinitely repeated.

But these accomplishments are marred by a few blemishes. Slime’s random number generator can use a bit of constraints. Several playthroughs were blessed by life-fountains and other health restoring services situated very close together, followed by long absences of any restorative facilities. Currently, there’s not enough distinction between acid and fire, with both functioning rather similarly. This carries over to Slime’s different decks. Beyond your basic deck, and a randomized one, the game’s fire and acid decks play a bit too similarly. 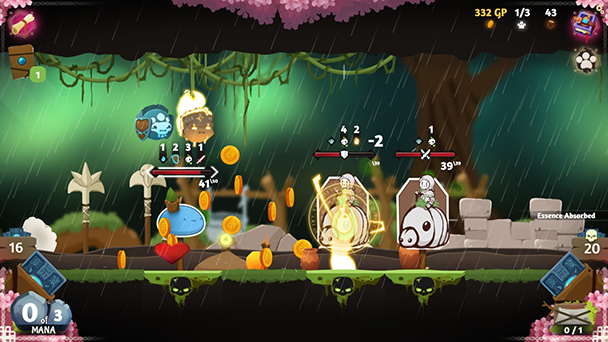 Conclusion
Card battling roguelikes such as Darkest Dungeon and Slay the Spire are irrefutably great games. But they’re not all that welcoming to newcomers, and frustration is likely. Rise of the Slime’s contribution to the genre is scalability. While aficionados can tackle advanced variants, less experienced players will find a gratifying introduction to the genre across the game modes. Even if you’re a dedicated turn-based devotee, Rise of the Slime’s relaxing pace and cheery vibe is poised to charm.

Rise of the Slime was played on PC with
review code provided by the publisher.

Rise of the Slime
Tired of being role-playing fodder, slime strikes back at meddling adventurers in this deck builder. With modes that scale to accommodate novices to pros, Rise of the Slime is a gratifying experience for almost any skill level. The fusion of card-based games, light role-playing elements, and roguelike qualities has proven fruitful. Across Darkest Dungeon, Slay the Spire, Monster Slayers, Griftlands, Monster Train,&hellip;

Summary : Deck-building roguelikes are often unflinchingly intense experiences that habitually humiliate imprudent players. Rise of the Slime is the friendlier, more cheerful alternative you’ll visit when you’re not in the mood for digital masochism.