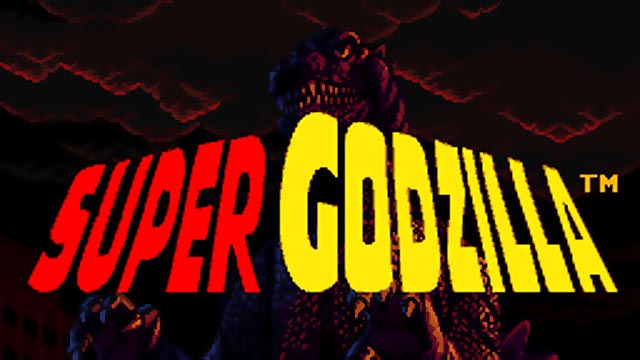 Growing up, there were three things I was a huge fan of; video games, pro wrestling, and Godzilla movies. I couldn’t get enough of Japan’s favorite (or is it least favorite?) radioactive dinosaur. Recently, I decided to revisit the series to see how well my mind had preserved it. Some movies, such as 1954 & 1955’s Gojira/Godzilla: King of the Monsters, fared better now that I’m older and not as picky about special effects or movies being in color. Other Godzilla movies, specifically Godzilla’s Revenge, will never, ever be enjoyable to watch, unless you’re with some friends who make jokes about the movie the entire time. Even America’s Godzilla 1998 starring Matthew Broderick wasn’t that bad, just not a great traditional Godzilla movie. Because of being on a Godzilla kick as of late, I thought I’d revisit 1993’s Super Godzilla for the Super Nintendo.

Super Godzillahas two types of gameplay. The first of which is the grid-based map screen where you navigate Godzilla through the sections of each stage. This is done simply by pressing up, down, left, or right on the d-pad to point Godzilla in the direction you want him to go. On the map screen, there are several different icons that you’ll see, some of which you will have to avoid. A blue dot represents Godzilla, whereas a pink one marks the enemy monster. Item and health recharge points are marked with detailed yellow and blue squares respectively. Buildings and mountains are in the game, as well, but only the smaller ones can be plowed through. Crushing buildings and power lines is what Godzilla does, but it will take its toll on his health. 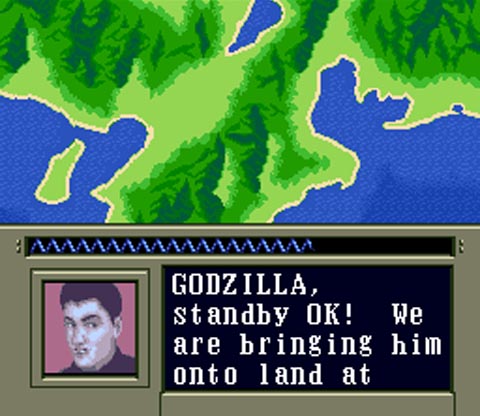 Along the way to the stage’s monster, you’ll encounter alien tanks, rocket launchers, and UFO’s. While the two ground enemies appear as map icons that fire when Godzilla is in range, the UFO’s appear in random battles that use the game’s battling engine (more on that later). Fortunately, these random battles don’t pop up with the same level of frequency as in some RPG’s. The UFO’s are controlled by a Mother Ship that is somewhere in the stage (represented by an orange circle on the map). Once you take down the Mother Ship, smaller UFO’s won’t appear and the stage’s monster won’t be able to warp.

When the time comes for Godzilla to square off with the enemy monster, the game’s perspective changes. The game switches to a 2-D side view where Godzilla is on the left and the enemy monster is on the right. The way you play this part is that you guide Godzilla over to his enemy, punch said enemy, and retreat to launch a cutscene move. While it sounds simple enough, it isn’t. Both monsters have a spirit meter along the bottom half of the screen. You have to work Godzilla’s spirit up while, at the same time, managing to lower the enemy’s spirit. This is done by moving forward when the opposing monster’s fluctuating spirit lowers. Even then, the monster can charge at you and knock you back, forcing you to work up the momentum all over again. 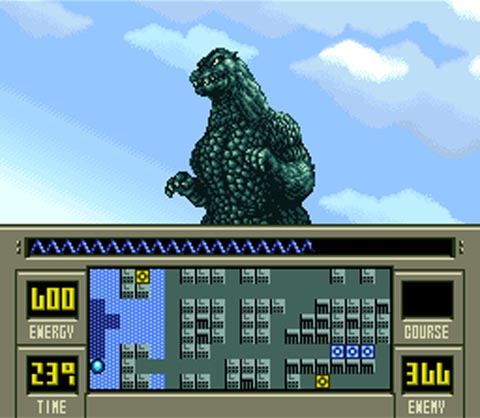 After you do finally manage to punch the enemy and start your retreat, a whole new problem approaches; the random attack selection box. As you pull Godzilla back, an icon representing a move will be displayed in a box in the middle of the lower half of the screen. These moves are random. If your box shows a move that does little or no damage to the other monster, you need to pull Godzilla back even more to cycle through to the next random move. If you run out of real estate, you need to move forward a bit and retreat again to continue the cycle. If you get cornered by the other monster when you punch, you’re pretty much out of luck.

The cinematic moves that I’ve been mentioning are relatively faithful reproductions of the original moves from the movies. While limited to a moving background and a very small amount of animation frames, they are well-directed sequences that manage to feel close to the source material. The details in these frames of animation look great for a game of the 16-bit era. It also helps that cinematic moves aren’t just one scene playing over and over again, but two or three different takes of the same move that randomly appear. 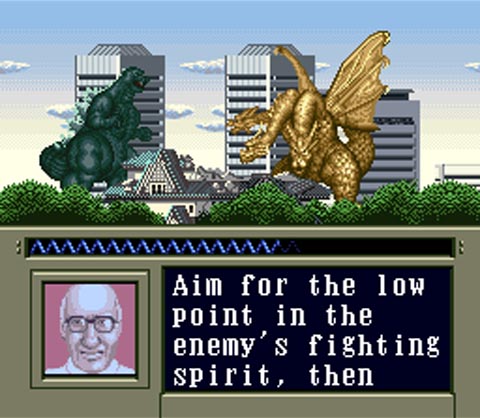 The audio completes the presentation for Super Godzilla. Not only do you have SNES-quality recreations of classic Godzilla music, but the roars, grunts and sound effects of the monsters ripped straight from the movies. Godzilla’s iconic roar is as it should be and Mechagodzilla’s raspy, metallic hiss sounds just like it did in his 1974 (Godzilla vs. Mechagodzilla) and 1975 (Terror of Mechagodzilla) movie appearances, albeit at a lower audio quality than in the movies. The game is also tied together with a paper-thin alien invasion plot that feels right at home in the Godzilla universe. This strong presentation turned this otherwise lackluster game into a tolerable experience for this fan of Toho’s number one Kaiju.

It’s not often that I go as far as to say that a game cheats, but I’m going to make an exception; the game cheats. The enemy monsters aren’t forced to punch Godzilla to strike with a cinematic move. So, why is the King of the Monsters forced to punch an enemy to hit them with his fire breath? The answer is that there is no answer. It doesn’t make an ounce of sense. Combine that with the “flash step”-like charging tackle I mentioned above and you have a game that throws balance out of the window to avoid being too easy.

While enjoyable, Super Godzilla was not worth anywhere near the $70 that my Grandma paid for it back in 1993 or 1994. I traded it in once (only to re-buy it several years later) to Funcoland for $10, probably when I was selling everything I could to get an original PlayStation. Here in 2011, $10 should be the absolute maximum amount that you pay for this game. If you ever see it at a second-hand store in that sub-$10 price range, give it a look. It’s unlike any other game I’ve played before.