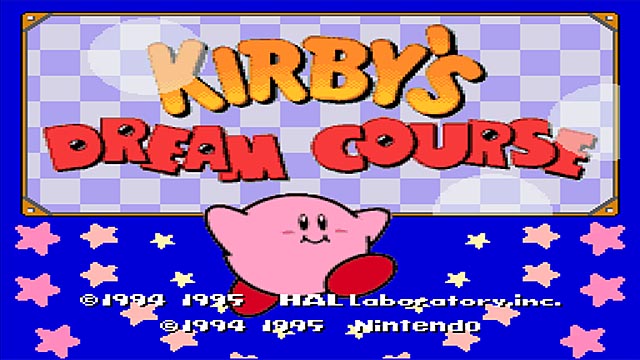 From racing on stars in Kirby’s Air Ride to matching three in the Puyo-Puyo-like Kirby’s Avalanche, Nintendo’s pink puffball has dipped his red toes into quite a few genres over the years. The sleeper hit of these side ventures is 1995’s Kirby’s Dream Course for the Super Nintendo. As bizarre as the idea of combining gameplay elements from Kirby platformers with miniature golf may sound, the result is a game that is completely unique. I’ve been gaming for twenty years and I have never played a game quite like it.

The simple golf premise of hitting a ball into a hole in as few strokes as possible still applies in Kirby’s Dream Course. What Kirby brings to the table (or greens, if you will) is his charming personality. For starters, Kirby is the golf ball. Each stroke you take knocks a Maximum Tomato off of Kirby’s health meter, which is displayed on the lower portion of the screen. Lose all four tomatoes and Kirby loses a life. Running out of lives results in a game over and you have to start the eight hole course over again. You earn tomatoes by hitting the classic Kirby enemies that are scattered around the hole. This is the main goal of the game as the last one remaining transforms into the hole. 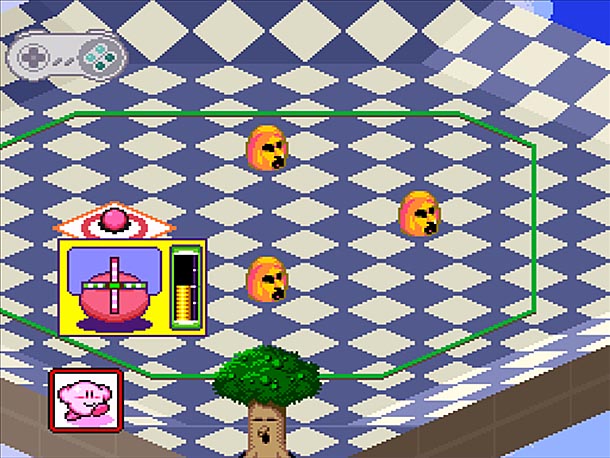 Like other Kirby games, certain enemies (marked by glowing yellow) will give Kirby a special power that he can use. The list of abilities reads like the track listing of a “Greatest Hits” album. Fire, ice, sparks, spikes, wheelie, jump, and UFO are all present and each has been adapted to perfectly mesh with the gameplay. A good example of this is how the umbrella ability allows Kirby to float slowly down toward the ground while in mid-air. Accurately turning Kirby left or right while using the umbrella can allow you to drop him right in the hole. Air vents on the ground of some holes act like an updraft, carrying Umbrella Kirby up into the air. When not in mid-air, the umbrella acts like an emergency brake, slowing Kirby down very quickly. Each power-up has this level of attention to detail.

When you add a second player to the mix, the game gets even better. This may be the most competitive game of golf you’ll play. First off, you have the ability to damage your opponent’s health/strokes remaining meter by using your Kirby’s acquired power as an offensive weapon against the other Kirby. For example, scorching Kirby number two with a fireball takes off a chunk of his strokes remaining bar (which is larger in two player mode). As Kirby two moves around the play field due to the impact of the fireball, it can end up rolling onto spikes, underneath Kracko (thunder cloud that shoots lightning), or fall off of the stage altogether. Unlike the single player mode, the game isn’t over when the health/stroke meter empties. Instead, that player loses a turn while Kirby takes a nap (and dreams of food) wherever he is when he runs out of health. This makes him a defenseless bull’s eye for a player with a grudge. Being reckless with collisions doesn’t pay, though, as non-power-up contact with the other player’s Kirby will result in the swapping of each other’s powers. When you have two players who know what they’re doing going head-to-head, you’re bound to see some epic shots made. 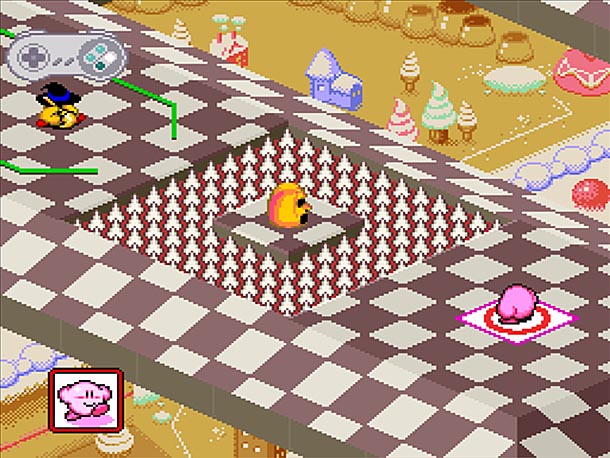 Another reason why Dream Course comes so highly recommended is that the holes are laid out brilliantly. Rotating panels, sand traps, water hazards, conveyor belts, air vents, bumpers, warp tiles, spikes, jumps and more are all used to craft a challenging series of courses. Kirby baddies are strategically placed in positions where taking a potentially risky trick shot is encouraged. This can make the hole designs feel linear at times. A quick glance over the hole will usually reveal what Nintendo would consider to be the “correct” way to play the hole (the order of baddies to take out). However, knowing the “correct” way to play the hole and actually executing the shots correctly are two completely different things. Kirby’s Dream Course is either a perfectionist’s dream or a perfectionist’s nightmare. Over fifteen years later and I’m still not sure which.

As for the presentation, Dream Course gets the job done with nothing bad enough to be a deal-breaker. The sprites of Kirby, Whispy Woods, and other Kirby characters are bright, colorful, and have some personality to them in spite of the limited frames of animation (Kirby having much more than the rest). The textures of the greens are a mixture of white and another color in a checker board pattern. It’s not very eye-pleasing, but it does help you aim your shots. The camera gives you an isometric view of the playing field with the holes feeling like their own little floating island in the sky. This is hammered home by the backgrounds consisting of lightly animated aerial shots of various Dreamland environments. The cheery music of Dream Course is a fitting collection of original songs and re-imaginings of classic Kirby tunes. 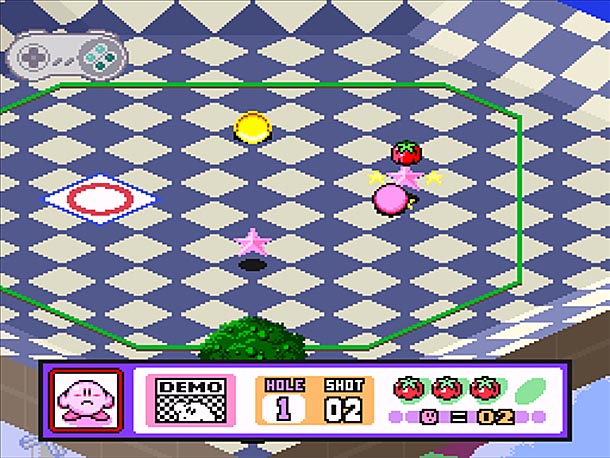 It’s truly a shame that Kirby’s Dream Course was a one-and-done spin-off. This is a fantastic and original take on the game of golf. I’d put my desire for a sequel at the same level as Mischief Makers, another single entry game worth revisiting. What’s funny about Kirby’s Dream Course is that it’s one of Kirby’s best games and it wasn’t even going to be a Kirby game in the first place. Instead it was going to be a game called Special Tee Shot; Kirby to the rescue, once again. Unlike the more obscure games I seem to write columns on, Kirby’s Dream Course is available on the Wii Virtual Console for only $8/800 Wii Points. I highly recommend this wonderful Super NES classic.

Previous: New Releases for the Week of November 27, 2011
Next: Sonic Generations (3DS) Review