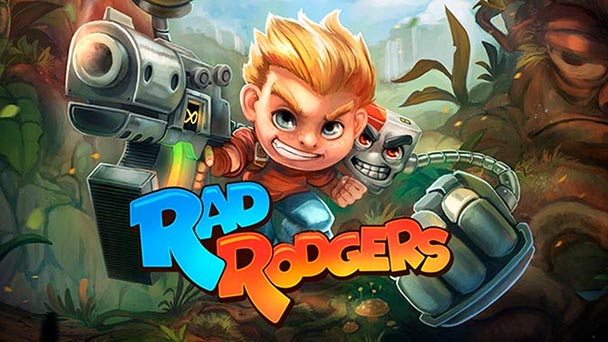 Dissonance in video games is quite common, whether it’s gratifying gameplay at odds with rudimentary visuals or a promising premise draped around stereotypical characters. But the recent release of Rad Rogers: World One exhibits a more complicated display of discord. Undoubtedly, there’s merit in many of the game’s design decisions, leading to stretches of satisfaction. But then, there’s the incongruous bits, the jagged edge on an otherwise gleaming package, which ruptures the sense of immersion.

The game’s graphics are often one of its greatest virtues. Stages appear sumptuous thanks to parallax scrolling, depth-of-field effects, evocative lighting, and skillfully crafted texturing. While Rad Rogers’ persistently references the platformers of old, there’s little of the conventional sprite table recycling going on. Not only does each section of a level have its own look, but each stage offers its own milieu, offsetting any chance for visual tedium. Cutscenes are stunning too, especially when Rogers drops the comics-styled panels for in-engine artistry. 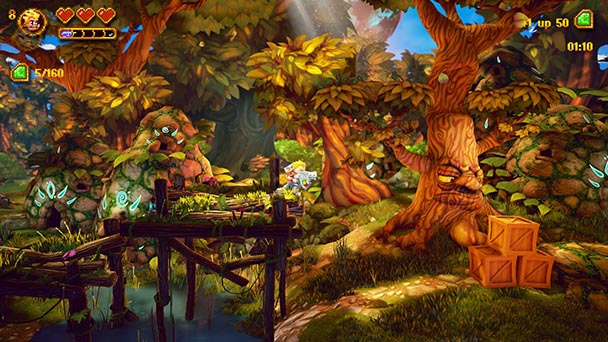 But as luxurious as the levels look, the environments conceal a few drawbacks. When you first approach Rad Rogers, danger isn’t telegraphed very well. Gaming might have taught us that lily pads offer safe passage across water, and while you can sprint across them, linger on them too long and you’ll receive a punishing electric shock. Early in the game, there’s a zone that pushes players downhill. Not only is there no forewarning of the sliding sections, but Rad Rogers lines the plunge with beds of hazardous red flowers which look rather innocuous. While a single mistake is rarely life threatening, the blunders made by not recognizing hazards add up, gradually pilfering away at your heath. Sure, you can play the game on the easier setting, finding power-ups to replenish heath, but this feels like a quick fix rather than deliberate design.

Similarly, Rad Rogers gameplay exhibits a mix of enjoyment with the occasional disheartening oversight. Tipping its cap toward older action-driven platformers like Mick and Mack: Global Gladiators, Rogers can be played with digital controls, where the protagonist and his anthropomorphic console sidekick obey digital inputs, firing a gun in eight directions. Alternatively, players can use the right thumbstick or mouse for targeting, which helps when the game’s enemies aren’t at forty-five degrees angles. Typically, the gun play is solid, elevated by several types of ammo upgrades and the ability to stun enemies before finishing them off with a melee attack or several pulls of the trigger. 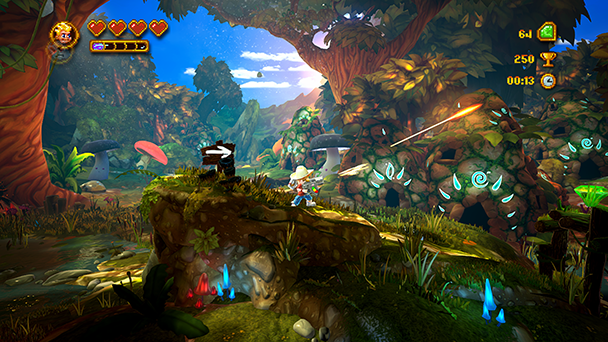 And while Rad’s mechanics are mostly solid, the periodic retreats into Dusty the console’s “Pixelverse” aren’t as compelling. These offer an overhead perspective on the action as you guide the comparison through fields of shifting danger, sporadically punching objects to change an environment object. But largely, these phases are homogenous, short, and a bit uninspired. With only a quartet of basic adversary types, combat with Rad can lack variety as well, but at least the dazzling locales help offset the deficiency. But sadly, the game’s concluding boss battle is a major disappointment. Not only does the title fail to foreshadow the mechanics involved, but it’s the rare instance when death can arrive instantly.

Peer closer and other smaller, niggling issues can be found. Periodically, an alcove in the backdrop invites exploration. But here the reference to Donkey Kong Country is too literal. All you’ll find inside is an NPC with a single line of dialog and a paltry power-up. Rad Rogers’ on-screen display and leaderboards support the model of a collect-a-thon, challenging players to eliminate every enemy and find every gem on a stage. But you’ll need a savant-like memory to recall which items you’ve grabbed on subsequent stage visits; Rogers fails to indicate which pick-ups you’ve already acquired. Then, there’s an issue with trying to appeal to multiple audiences. Although a menu selection is supposed to turn off some of the salty-language, John St. John will still offer a few curse words on some of the latter levels. And anyone expecting any Duke Nukem-like mischievousness by the rather hum-drum voice script. 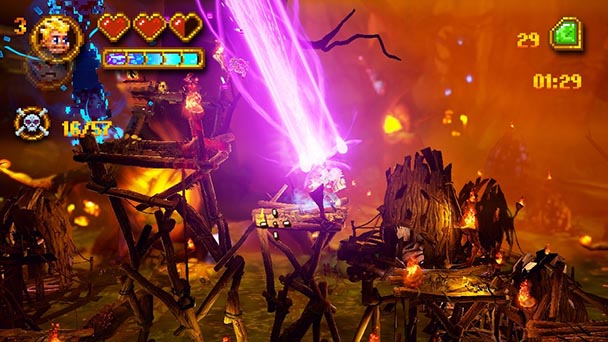 It might sound like several small issues ultimately sap the enjoyment from Rad Rogers. Likely, that might be the case for some particular players, but it won’t be the experience for everyone. There is fun to be had as you scamper around the meandering stages, where you’ll appreciate unloading ammo into enemies and platforming that doesn’t require pixel-perfect accuracy. Surely, you’ll distinguish the small snags on the two-hour playthrough, but none are serious enough to discourage progress. While titling the game Reasonably Enjoyable Rogers might not have incited sales, it would be a fitting moniker. Hopefully some patching will make this World and any ensuing ones truly Rad.

Rad Rogers: World One was played on the PC
with review code provided by the publisher.

Rad Rogers: World One
Platform:
PlayStation 4, Xbox One, PC
Developer: Interceptor Entertainment
Publisher: 3D Realms, THQ Nordic
Release date: February 20th, 2018
Price: $19.99 digital. Steam version currently on sale for $14.99
Rad Rogers: World One review
Dissonance in video games is quite common, whether it&rsquo;s gratifying gameplay at odds with rudimentary visuals or a promising premise draped around stereotypical characters. But the recent release of Rad Rogers: World One exhibits a more complicated display of discord. Undoubtedly, there&rsquo;s merit in many of the game&rsquo;s design decisions, leading to stretches of satisfaction. But then, there&rsquo;s the incongruous bits, the jagged edge on an otherwise gleaming package, which ruptures the sense of immersion. The game&rsquo;s graphics are often one of its greatest virtues. Stages appear sumptuous thanks to parallax scrolling, depth-of-field effects, evocative lighting, and skillfully crafted texturing.&hellip;

Summary : Rad Rogers’ inaugural excursion is entertaining but sullied by several issues that make the game feel like it was released a bit too early. None of these are deal breakers, but collectively they make the game less enjoyable that it should be.