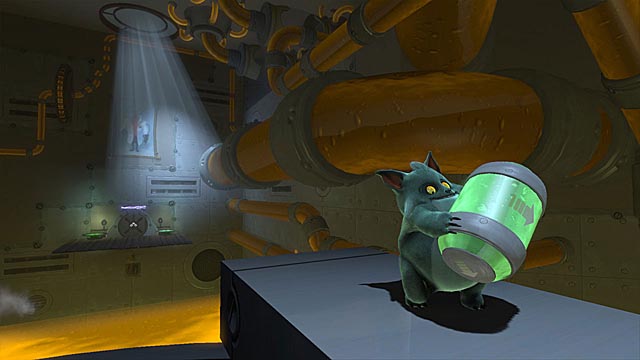 What is the concept? For better or worse, recent PC release (and forthcoming Xbox 360 and PlayStation 3 title) Quantum Conundrum is fated for comparison with Portal. Apart from both games showcasing the talents of Kim Swift- the DigiPen prodigy recruited by Valve’s Gabe Newell, the two works share several other irrefutable thematic similarities. From the utilization of a first-person perspective, incorporation of a disembodied voice to add comic relief to the physics-based puzzling, and even the rampant use of acronyms in the naming of objects, the development team at Airtight Games (Dark Void) have aped many of Portal’s signature components.

Yet, thanks to the game’s Interdimensional Shift Device (or IDS), a glove which endows the silent protagonist with the ability to manipulate environmental dynamics, Conundrum is able to cultivate its own distinct vibe.  Using the tool, gamers are able to modify basic physics in four ways. Initially, players are able to evoke the fluffy dimension, a state where objects are rendered with a fleecy exterior, allowing heavy items such as safes to be effortlessly tossed around. Later, the ability to increase the mass of an item arrives. It’s an attribute that is ideal for getting a fragile object past an array of lethal lasers or breaking the glass window which blocks entry into the next room. Rounding out the IDS’s feature set are the ability to drastically slow down time and well as the capacity to reverse gravity. 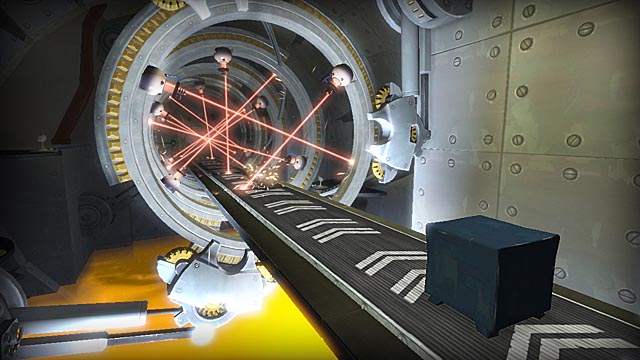 Like many virtuous puzzlers, Conundrum forsakes a protracted tutorial, imparting the full functionality of the IDS in easily digestible servings. Beyond a bit of conversational guidance and a few on-screen prompts, players master the glove’s potential through experimentation and execution. Naturally, advanced dilemmas require players to chain a set of dimensional shifts together. As such, sequences where players grab a couch, switch to fluffy mode to throw the item, hop on, then toggle gravity to ride the sofa across a gap aren’t uncommon in the campaign’s concluding hours. It’s during these moments where Quantum Conundrum reveals its distinctiveness, complementing its riddles with light action bits.

What are the games strengths? Like Swift’s earlier efforts, Conundrum deliver a textbook example of perceptive, meticulously-tested, level design. Once the game strategically reveals specific abilities of the IDS, it’s up to the player to come up with creative variations and applications of the powers. Elegantly, solutions to the game’s puzzles consistently felt fair- relying on observation and analysis rather that blind experimentation. When gamers do get dumbfounded, the game frequently offers up verbal and visual clues to help prohibit players from getting stuck too long. 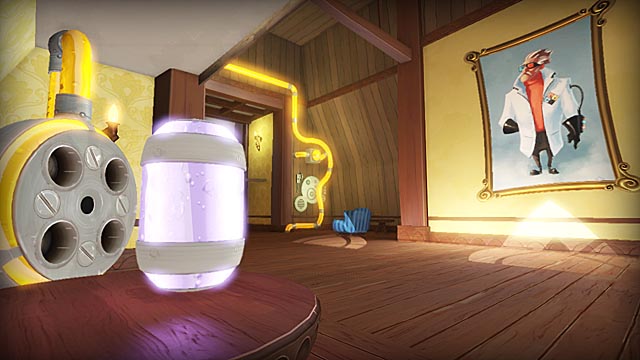 John de Lancie, known for his role as Star Trek’s Q and voicework in Assassin’s Creed: Revelations, offers up a commendable performance as Conundrum’s professor in peril. Although his dialog isn’t as witty as the banter which sprang from GLaDOS, the screwball scientist does offer the occasional non sequitur, to advance the game’s energetic and eccentric tone.  Despite the game’s impressive physics system, Quantum Conundrum ran fluidly on midrange PC’s, stuttering only when the game’s loaded in the next section of the game’s environment. Small graphical flourishes, such as character portraits which change depending of the dimensional ability players are using help to articulate a sense of whimsy.

What are the game’s weaknesses? As exceptional as the game’s level design is, platforming presents the occasional moment of frustration. Jumping across gaps from a first-person perspective often requires pin-point accuracy. As such, players can expect to miss the occasional leap not because of hasty carelessness, but because it’s difficult to gauge the position of an off-screen foothold. Fortunately, a liberal number of checkpoint and speedy respawn time help lessen the anguish of a botched jump. 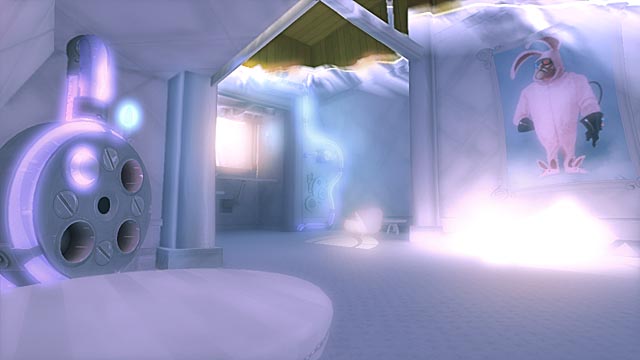 Considering the sense of gratification cultivated by solving the game’s dilemmas, players might expect a similar payoff for Conundrum’s conclusion. Woefully, the title ends abruptly, substituting a sense of closure for the opportunity to expand the story via downloadable content.

Is it worth the money? Although Quantum’s conundrums can be surpassed in a single seven-hour sitting, a scattering of collectables and leaderboard support hope to augment the title’s playtime. While that duration might seem a bit short, know that the game is a taunt experience, one that is stripped of the superfluity which often bloats entries in the puzzle genre. Considering the game’s economical fifteen dollar MSRP (with outlets such as Green Man Gaming selling the title for as little as $11.25), a purchase of Quantum Conundrum is a figurative no-brainer. Just be sure set aside a bit of change for the upcoming DLC if you find yourself charmed by the game’s characters. 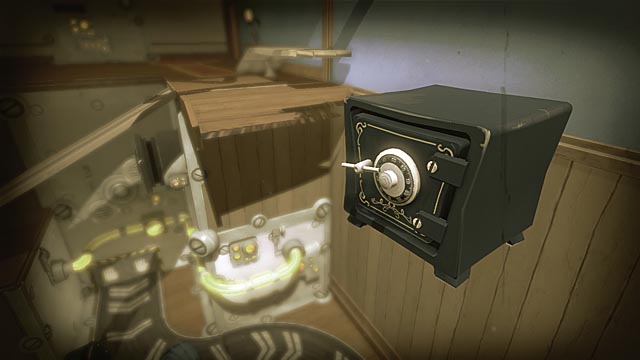