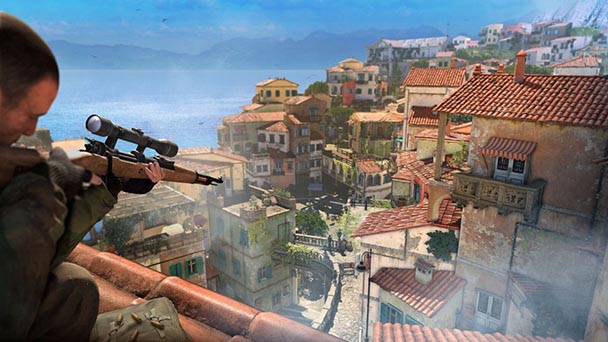 Most E3 demos follow a predictable pattern. You sit down, listen to a long-winded debriefing that highlights key features, all before getting a taut-leashed, fleeting taste of gameplay. Pleasingly, that wasn’t the case with Rebellion Developments’ Sniper Elite 4. Either the Oxford-based team was confident in the abilities of players or in the game’s ability to accommodate a range of tactical approaches. Either way, we walked away from the latest entry into the eleven-year old franchise giddy from the strategic possibilities for stealthy, long distance, Third Reich-gunning. After the show, we caught up with the team to see what’s in store for shooters next February.

Tech-Gaming: We have to discuss the relatively hands-off attitude of the E3 demo. Was that confidence in your game or a reaction to the typical hand-holding that often occurs during public exhibitions?

Rebellion: This was primarily down to us not wishing to devote crucial development time to a bespoke E3 demo that would likely be at the expense of the core game development. It would also not be representative of the actual game –which is resolutely about allowing players the freedom to approach it in any way they choose.

T-G: The game continues the events of Elite 3, following the long-shooting undertakings of Karl Fairburne as he assists Italian resistance. What can players expect from the game’s narrative?

Rebellion: As Karl Fairburne gradually gains the respect of the local Italian resistance group he is working with, the player will be exposed to many aspects of the tensions that were rife in the region during World War 2. There were many different factions all vying for control in one way or another and trust is very much in short supply. Naturally, as ever, Karl’s focus is on disrupting the Nazi war effort for the allies but there will be plenty of intrigue along the way! 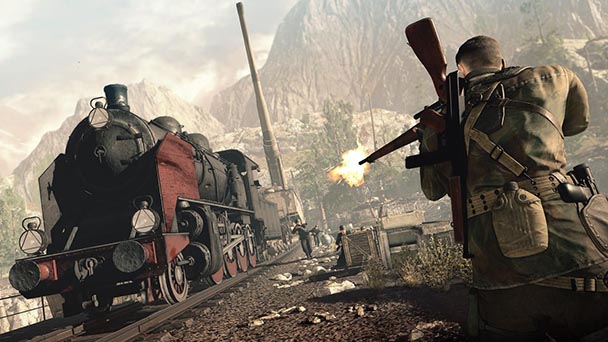 T-G: The Sniper Elite series has lithely shifted from a more linear, scripted approach to wide open battlefield that can accommodate a number of number of stratagems. How did the team find the balance between these two styles?

Rebellion: It’s definitely tricky! We try to keep our focus on what Karl Fairburne – and Sniper Elite players — would do in any given situation and build the possibility space of gameplay around that. Really, the key is to have AI behaviours that are flexible enough to cope with any approach the player might throw at them. It’s generally far better to have an emergent AI behavior that reacts appropriately to you blowing up a key mission objective than it is to have to script the entire sequence so that it can only play out in one way!

T-G: Likewise, the game seems to sit between the extremes of accessible shooter and demanding simulation. How are you ensuring Sniper Elite 4 finds that elusive middle ground?

Rebellion: Sniper Elite has always offered up a wide range of difficulty modes that aren’t just about tweaking the health values and accuracy of the enemies. On harder difficulties, we open up more of the “simulation” aspects of the ballistics to the player – which simultaneously make the game more challenging and more rewarding (for those players that enjoy taking it to the next level!). On the very hardest difficulty, we strip away most of the “gamey” visual helpers for the hardcore that really want to test themselves… But don’t worry – the “normal” difficulty offers up plenty of challenge and depth, while remaining very satisfying and accessible for most players. I think the thing that separates Sniper Elite from typical shooters is the pace – it’s not necessarily less accessible – it just requires a different mindset, where taking your time and making every shot count is the best approach. We have many players who find games like Call of Duty rather overwhelming and actually are a lot more comfortable with Sniper Elite’s approach where we aren’t constantly hurrying the player to get to the next elaborately staged showdown! 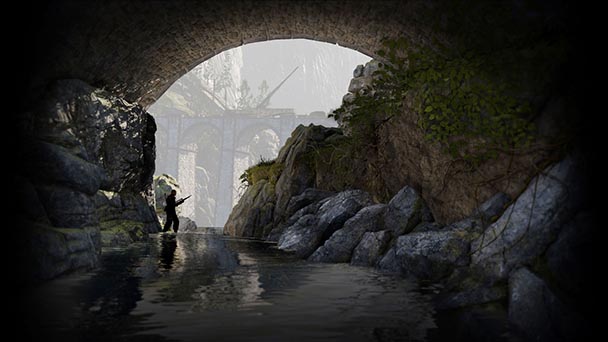 T-G: Level design is crucial for a sniping game- extending nests across high ground, vantage points to perform reconnaissance, and plenty of places to take cover if you get spotted. How did the team go about creating areas that allow for multiple strategies?

Rebellion: It’s an ongoing iterative process. We know many of the key elements that we want to include in each area – for example, places to climb, buildings to hide in, vegetation to take cover in, wide vistas to snipe across etc. Once the foundations are in place, we try them out and try different tactics. It actually takes quite a lot of discipline as a designer not to plan a “perfect” way to deal with any given scenario, but to allow players to plot their own path. It is at its most rewarding and exciting when a player does something completely unexpected but that works because of the flexible approach we have taken.

T-G: The demo stage seems absolutely huge- so much that it was difficult teasing out an ideal stratagem for destroying the bridge. How do you plan to offer guidance to those players seeking a bit of direction?

Rebellion: The player always has access to their objective and map at any time which will quickly clarify what they need to do in most circumstances. I’m confident that if you are not under the pressure of having only a few minutes to play the demo, you will be more comfortable in figuring out how to tackle the destruction of the bridge!

T-G: Let’s talk about the artificial intelligence of enemies for Elite 4. I witnessed a soldier hide behind a tree before eventually scrambling for a covered position. It felt more like a gunfight with a real, online participant rather than a CPU-controlled foe. Can you tell us more about the improvement that went into AI?

Rebellion: Well that’s great! The AI has been completely overhauled for Sniper Elite 4. We’ve worked hard to make it as emergent and adaptable in its behavior as we can. The soldiers pay attention to the status of the other soldiers around them and there are lots of cool nuances to their behavior. For example, they behave more aggressively – pushing forward toward the player – if there is an officer within the squad, and falling back into defensive cover positions if the officer is killed.  They all make “intelligent” use of cover and have a healthy sense of self-preservation which helps them appear more believable.

Another huge change is that the AI is also active over the whole map at once. Wherein previous games the hardware meant we had to do some cheating about which AI were ‘on’ and which were ‘off’, being solely on Xbox One, PS4 and PC has meant that each huge campaign level feels like it’s occupied by a unified force, rather than a few separated clusters of enemies. Snipe an enemy 500m away and his friend will spot the body, and possibly report it to troops nearby – there’s a subtle and believable domino effect that allows you to influence and affect the AI across vast distances. 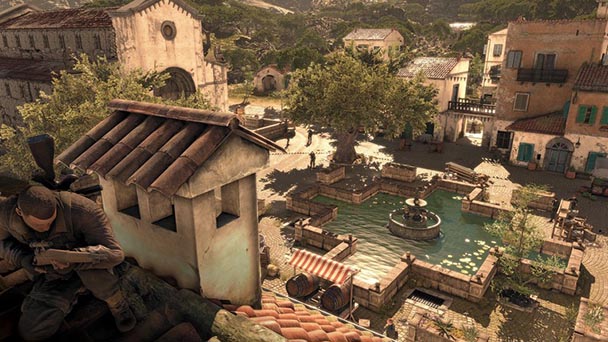 T-G: Were you gathering any informal analytics at the E3 demo? Say how players approach situations or enemy behaviors? Did the session inspire any tweaks?

Rebellion: We were watching the players at E3 intently to see how they approached things and we will definitely be making some improvements and tweaks based on that. Overall, we were thrilled with how well people “got it” and all the enthusiastic responses so I think we’re in a great place to deliver the best Sniper Elite game yet!

T-G: Enemy counts also seemed to have been elevated, as the demo must have had close to a hundred soldiers across the region. How outnumbered can players expect to be?

Rebellion: Environments can have hundreds soldiers in them – and that’s not including any reinforcements you might trigger! As for how many that might be alert to your presence at any given time… that’s entirely down to how stealthily you are playing!

Rebellion: Booby traps are a big part of Sniper Elite – and we’ve added a few new tricks too. Each of them now have secondary trigger modes too so, for example, the Teller mine can be set to require two presses before it explodes… this is ideal if you are taking out a passing patrol: the soldier in front may trigger the first press but the mine doesn’t blow until a second soldier steps on it, right in the centre of the patrol group, taking out the entire group in one go! 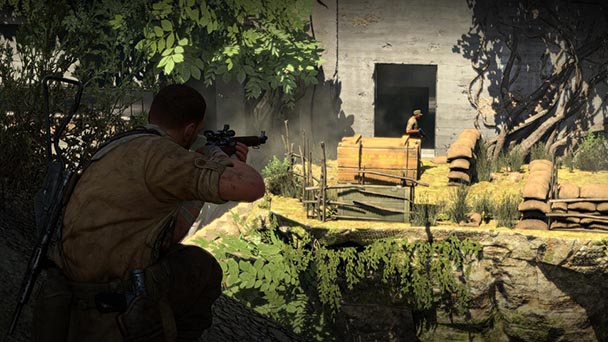 T-G: Sniper Elite 4 still exhibits those ghoulish x-ray kill-cam sequences that shows the effect of your bullet as it enters and exits an enemy? Can players expect to witness any changes to these cinematics?

Rebellion: Our x-ray kill-cams are definitely still part of the game! And we’ve increased the detail and variation in them considerably. We’ve also got x-ray kill-cams that trigger for stealth and melee kills and additionally for booby traps and explosives. It’s really satisfying to have placed a trap and have it trigger some time later and be shown the explosive results of your handiwork in glorious slow motion detail! Of course, players that prefer not to see the kill-cams can turn them off entirely in the options.

T-G: Let’s talk about the game’s multiplayer component. What’s in store for competitors?

Rebellion: The entire campaign will be playable cooperatively for two players which really opens up a world of strategic possibilities! We’ve also got some specific cooperative game modes and a range of adversarial competitive modes too! Expect us to expand on what we offered in Sniper Elite 3 – there’s a lot of game coming.

T-G: With the imminent release of the game, you’ve decided to handle publishing duties internally, instead of relying on another company? Has this had an effect on creative direction, budgeting, or release date?

Rebellion: With V2 and Sniper Elite 3 we were collaborating rather than working for hire, so we’ve always had a certain amount of freedom. The IP is ours after all, but now we have the freedom to make any decision we like, when we like – decisions that favour the player first, rather than the publisher. It’s not always easy, but we love being independent. 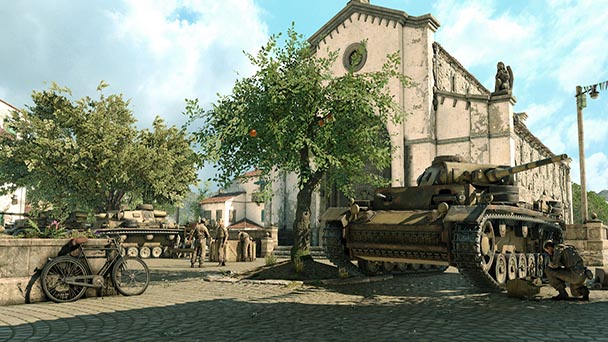 Tech-Gaming would like to thank Wonacott Communication’s
Kathy Bricard as well as the Rebellion Development team.