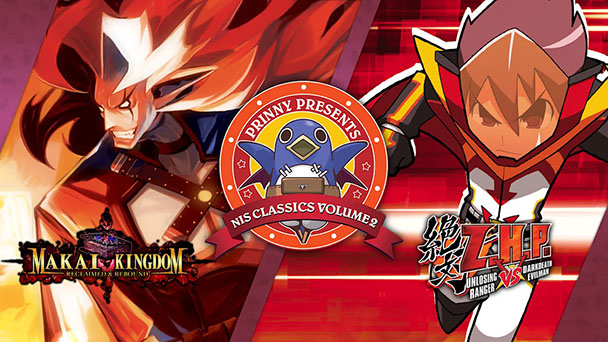 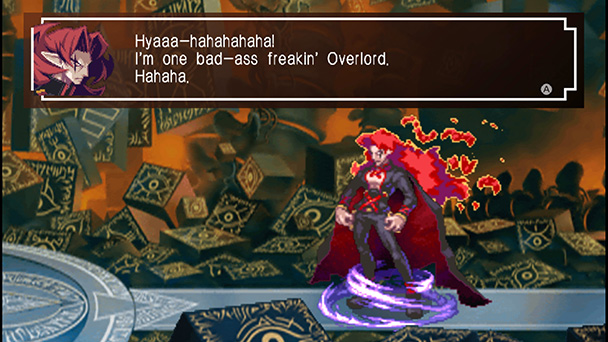 Grinding is a ubiquitous mechanic in role-playing games. Effectively, the method allows players to soften a game’s difficulty by repeatedly defeating lower-level enemies, thus getting a permanent statical boost. But often, grinding can feel like a monotonous punishment.

That charged in 2002 when Mastiff published Nippon Ichi Software’s La Pucelle: Tactics. Here, the developer laid the foundations that would ultimately evolve into games like Disgaea and Phantom Brave. From a cast of characters that bookended turn-based battles with playful banter, enchanting sprite-work, and capricious but catchy soundtracks, La Pucelle established a template that would endure for decades. 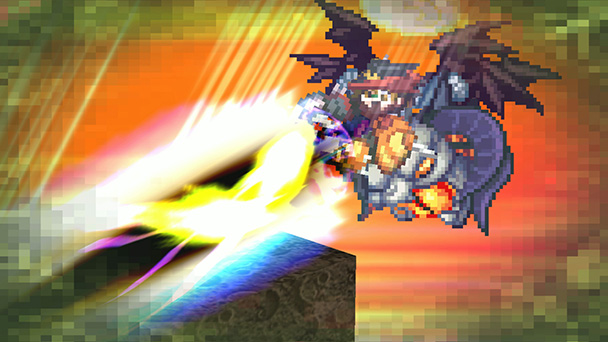 Most importantly, La Pucelle: Tactics transformed grinding from a chore into an engaging undertaking. While only the final boss requiring taking out successions of trash mobs, Disgaea would allow players to grow to absurdly high levels, dispensing gargantuan amounts of damage. You could even delve into the item world, exploring a realm-within-a-realm that could augment your tools. Sure, it might all sound like a Sisyphean task in description, but NIS’ intricate battle system ensured that combat was persistently absorbing. Experimenting to find the most efficient techniques was quite enjoyable.

Prinny Presents NIS Classics Volume 2 offers a return to that approach, before grinding was purposefully vexing and intended to lure players into buying DLC shortcuts. Both bundled titles are time sinks which might exasperate impatient players. But each demonstrates the developer at a creative summit, pushing their blueprint in bold new directions. Let’s take a closer look at each title: 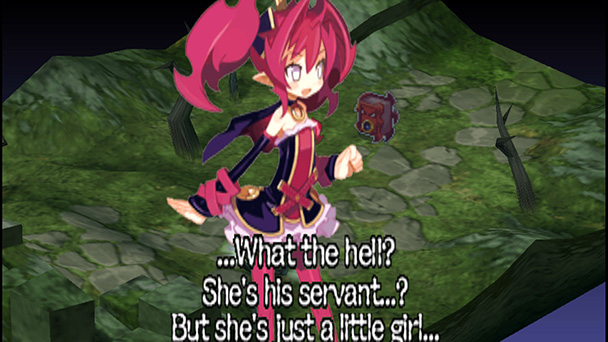 Long before multiverses were pervasive in Hollywood, NIS imagined parallel netherworlds, each overseen by their own contentious overlords. In Makai Kingdom, the most powerful overlord is Lord Zetta, who is obsessed with ensuring his cosmic reign remains uncontested. But when another overlord named Pram prophesizes the end of his world, Zetta loses composure. He seeks out the Sacred Tome, a book that contains all the secrets of the universe to find out if Pram is full of nonsense.

But the ancient book confirms his kingdom is destined for disaster. In a fit of rage, Zetta burns the Sacred Tome, which inadvertently destroys his kingdom, turning the predictions into historical truth. With no alternatives, Lord Zetta binds his immortal soul to the book, clinging to a last-ditch hope of reclaiming his kingdom and supremacy. 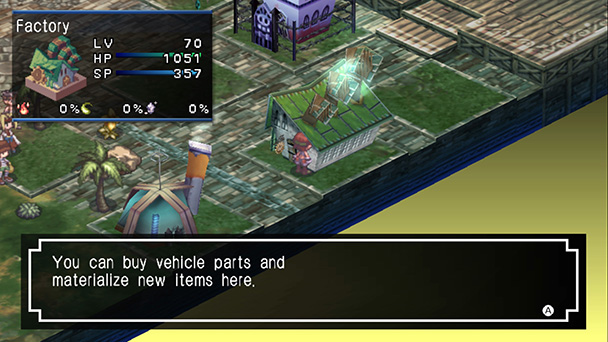 As a hardbound book, Lord Zetta can’t fight directly, which means you’ll employ a team of unlockable characters from the storyline as well as created ones. Much like Phantom Brave, you’ll transform environmental objects like rocks, bushes, and trees into combatants. But unlike Marona’s tale where party members would eventually revert back to the original form, Makai Kingdom’s troops are enduring. You’ll name, grind, and cultivate each of them, and the formula means you’ll probably grow quite attached to your troupe. Like many of Nippon Ichi’s works, the larger-than-life characters and their predicaments are consistently amusing.

Like Phantom Brave, Makai Kingdom eschews gridded battlefields. Instead, Zetta will summon up to eight units for battle who move move in circular ranges and freely issue attacks. Although Disgaea enthusiasts might miss the combos, there are a few noteworthy nuances found in the turn-based fights.

Facilities range from castles, clock towers, markets, and huts, each storing characters and items. Units deployed from these structures receives different types of bonuses as long as you are in control. As such, they can be flashpoints for conflict. If a turn ends after opposing forces have breached the building, a brawl will occur, potentially leading to a reversal of control. Vehicles allow multiple units to move farther and are unable to execute their own powerful attacks. Pleasingly, even if a vehicle is devastated, pilot and passengers are able to get out and continue fighting. You can even order a character to disembark to issue a powerful assault. 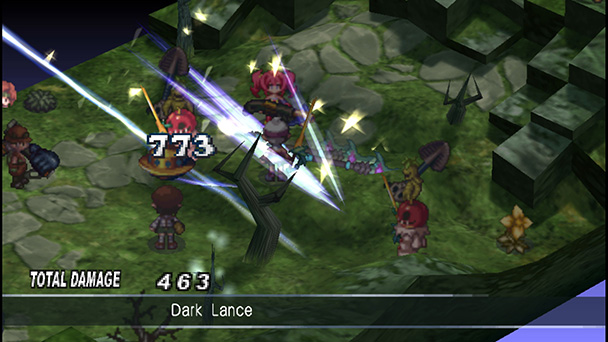 Maps have varied topography and randomly placed objects that can be picked up and seized. Like Disgaea, you can also pick up and toss characters. Sometimes, flinging a foe of the side of the stage is more convenient than trading attacks. But the big twist with maps in that by eliminating ‘key’ adversaries, you can uncover new sections of the battlefield, which are often filled with additional enemies. This makes strategizing a bit tricky the first time you tackle a new location, since you don’t quite know just how much adversity awaits. But there’s always the possibility of an honorable end to an encounter once you accrue enough battle points. Yes, you don’t have to sweep the ground clear of enemies unless you really want to.

But this kind of grinding has its benefits. Tackle higher level foes and you’ll have to maliciously strategize, using every advantage that’s available to you. This is great for armchair tacticians. Fight a succession of skirmishes against standard foes and Makai Kingdom makes boss battles more of a symbolic showdown. Invest hours grinding and you’ll be rewarded by subordinates who can’t damage you and bosses you won’t exhaust the health of several characters with a single area-of-effect attack.

SRPG fans looking for some light divergence from formula will undoubtedly enjoy Makai Kingdom: Reclaimed and Rebound. Right alongside Disgaea and Phantom Brave, its one of the titles that helped the PlayStation 2 become so beloved by fans of the genre. 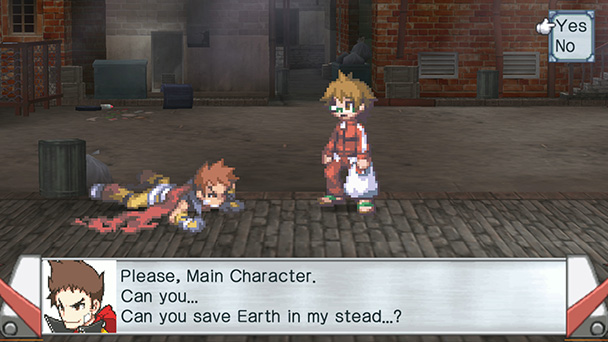 Unlosing Ranger offers yet another winning deviation from Nippon Ichi Software formula. While stodgy strategy role-playing stalwarts may bemoan the title’s simplified, decidedly roguelike combat, the rest of the world will appreciate the game’s ambition to be more than just a reskinned revisit to Disgaea’s netherworld. Although Z.H.P.‘s endearing sense of humor, addictive structure, and  visual presentation may produce a feint sense of nostalgia, the title forges its own enchanting and often eccentric personality.

With a narrative just as unconventional as its fifteen syllable moniker, the game commences with the impending showdown between the Demon General DarkDeath Evilman and resolute hero, Absolute Victory Unlosing Ranger. In route to a scuffle which could keep the Earth safe from destruction, the Ranger gets struck by a passing car. Before expiring, the gallant hero bestows his costume to the first passerby- compelling the stranger to engage the malevolent Demon General. 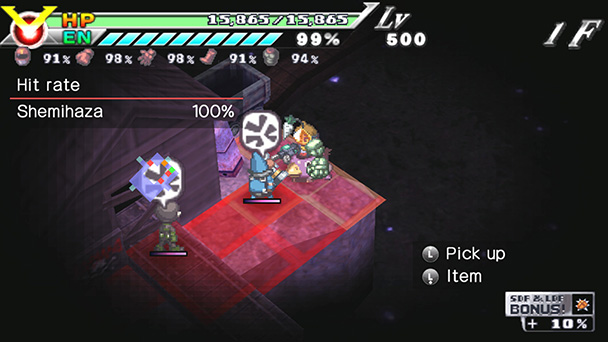 At this point, control is relinquished to the player, as DarkDeath mercilessly annihilates the makeshift superhero, sending him to Bizarro Earth. Here, the player must empower themselves in an effort to return to our planet and defeat the tenacious villain. The game’s delightfully comical writing keeps Z.H.P. from becoming overwhelmed by sheer absurdity. Originally, released in 2010, the game was a wonderfully silly reprieve from the deluge of morose and dramatic games. With two opposing coaches which offer either self-empowering optimism or belittling criticism, the title’s dialog is elevated by the type of sophisticated banter uncharacteristic for the genre.

Beyond several ill-fated attempts to defeat DarkDeath Evilman, players will be spending most of their time in Bizarro Earth’s overworld and dungeons. With the ability to maintain weapons and armor, buy and sell sundries, and well as augment the Unlosing Ranger’s body with found objects, the game’s outer realm functions as a convenient hub. To prohibit newcomers from being overwhelmed by the cascade of decisions, clinics and depots are opened gradually, each new building introduced with a mercifully concise tutorial.

Wisely, expeditions into the underworld of Bizarro Earth are given a strong narrative impetus (stop a disgruntled employee, halt a bully, etc.), yet are short enough to be completed by commuters. Players move the Unlosing Ranger through isometrically-rendered territories, while avoiding the tell-tale red zones which surround foes. If these areas are breached, opponents pursue the player doggedly, resulting in a statistics-driven skirmish. 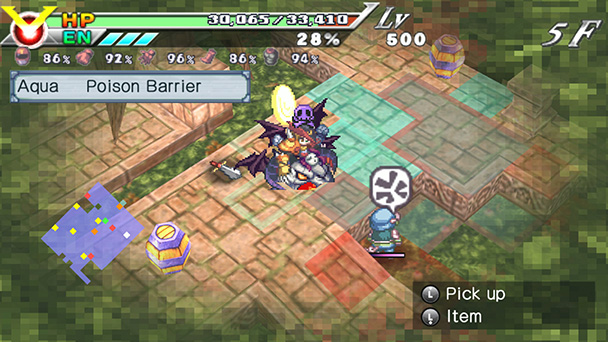 It’s a simple mechanic that is elevated by Z.H.P.’s myriad of minutiae- gamers can lift and throw objects and adversaries, cast devastating spells, or fight with melee and ranged weapons. Additionally, the Unlosing Ranger has to contend with deteriorating equipment and a relentless appetite which fuels the superhero. Cleverly, Z.H.P. eliminates much of the menu-item management that is characteristic of the genre. As long as players keep their hunger in check, their HP will automatically replenish, eliminating the need for constant potion quaffing.

There’s a certain type of gamer that will be entranced by Z.H.P. Unlosing Ranger‘s consummate combination of charming humor, near-limitless supply of stat-supplementing loot, and randomly-generated territories. While the stat-crunching aficionados of La Pucelle Tactics, Phantom Brave, and the Disgaea series will surely be captivated by the title, more milder enthusiasts might find fault in the game’s proclivity for grinding. And that’s requisite for a purchase of Prinny Presents NIS Classics Volume 2. Strategy supporters will be thrilled to see these two great efforts unified into a single, reasonably price package, and I’m already excited about the release of the third volume later this year. 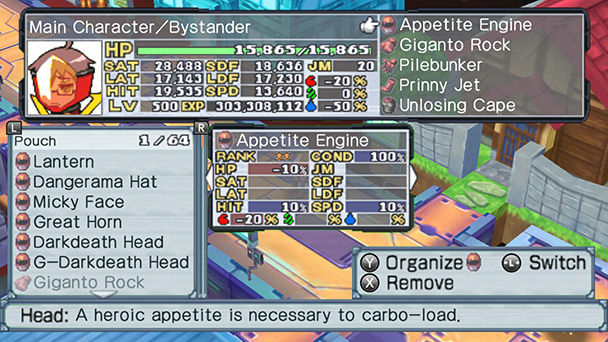 Prinny Presents NIS Classics Volume 2 was played on
Switch and PC with review code provided by the publisher.