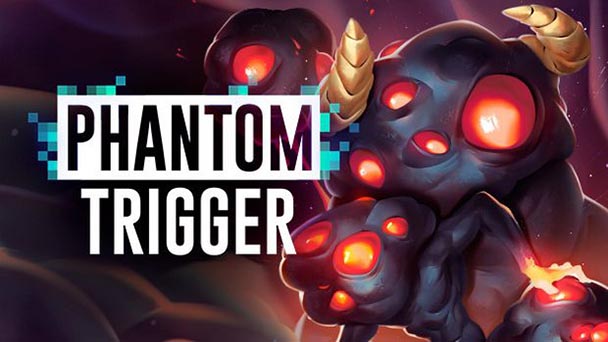 Ambiguity is becoming increasing rare in modern games. All too often, our recreations leave little room for even an iota of doubt, devotedly explaining each play mechanic and clarifying every last plot detail. While that might sound like a beneficial trait, the recent PC release of Phantom Trigger demonstrates that a bit of equivocality can be a good thing. As other mediums have shown, abstraction can be positive attribute.

Its east to spot Phantom Trigger’s ambitions from its opening cinematic. Here, we snoop on a seemingly mundane suburban conversation between husband and wife, as the pair prepare for breakfast. But the idyllic interlude is quickly devastated as Stan falls the floor. From here, the title fractures into two interconnected storylines. In one, we discover more about the protagonist’s seizure, his reluctance to pursue surgery, and his pursuit of an experimental treatment. The other narrative centers on the journey of the Outsider, a scarfed adventurer tasked with making his way through a succession of sadistic dungeons. 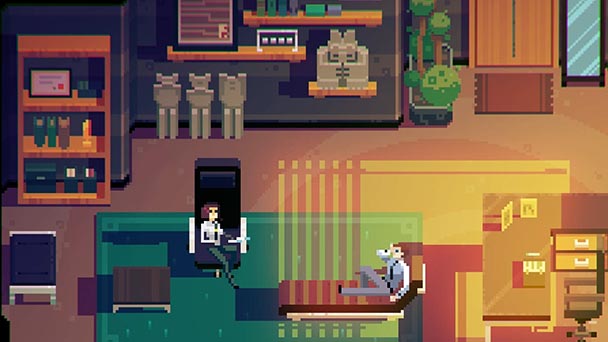 Intriguingly, Phantom Trigger isn’t overly concerned with explicitly bridging the two tales, forcing players to find the connections. After being spoon-fed exposition for years, the aspiration proves commendable, even if some players might grumble about the division. Remarkably, Trigger’s dialog takes another risk, with NPC’s speaking in nebulous, often condescending tenors, creating the sensation that you are in fact an interloper in world wary of strangers. Part of the uncertainty stems from the curtness of replies, rarely does the game make players sift through more than a sentence or two of conversation, forcing gamers to deliberate on every word.

But narrative and dialog decisions are only a small part of Phantom Trigger’s journey, with the majority spent in the game’s neon-hued dungeons. Recalling Hyper Lift Drifter in both palette and playstyle, the experience is built around pugnacious combat, puzzle-solving, and exploration of evocative, pixelated environments. 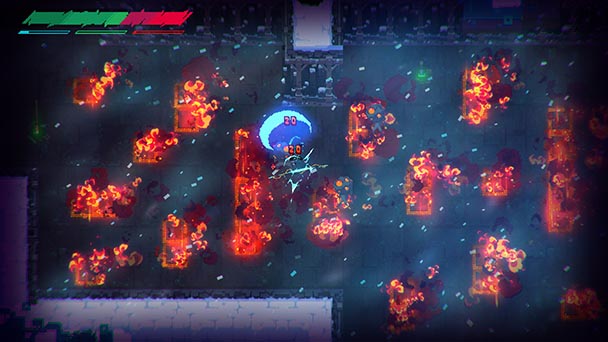 In keeping with the theme of obscurity, don’t expect any of these things to be explained to you. Like many of the game of lore, there are no text-based pop-ups to tell you what to do, nor even a button prompt. In keeping with the sensation that you are a stranger, you’ll have to figure things out on your own. Without spoiling the experience, we can say that you are ‘blink’ abound, teleporting across short distances with a press of a button. Offensively, you are given three distinctively hued weapons- a sword, whip, and knuckles, that each level up by breaking correspondingly colored crystals. Doing so, opens up different combo possibilities capable of doing things like slowing or even freezing enemies.

While Phantom Trigger extends a limited number of foes, enjoyment stems from learning and exploiting each opponent’s distinctive attack pattern. When the game tosses an assortment of foes at players prioritizing target amidst the chaos and scattered traps can be grueling. On the game’s default (hard) difficulty setting you can expect to play sections a multitude of times, as health is only restored at checkpoints. Even on Phantom Trigger’s ‘normal’ mode, it’s not uncommon for a ranged strike or two to put players as a demoralizing disadvantage that’s hard to return from. If you lack the patience or skills to look for enemy tells and take split-second action, you might want to circumvent Trigger’s struggle.

Puzzles are usually simple affairs, intended to not impair the pace of the game. Most of the time you’ll push a block or copy a pattern, or match a weapon affinity to an enemy or part of the environment. Occasionally things get thornier, with boss battles requiring a bit of critical thinking from players. But largely, Phantom Trigger’s conundrums don’t pause the action, like say the Devil May Cry series. Often, faulty attempts release more opponents, insuring a steady supply of tension.

Visually, Phantom Trigger employs a retro-inspired, pixelated aesthetic, rendered with washes of dazzling purple and teal. Mirroring its approach to plot and play, the graphics aren’t overly clean, with pathways perceptible but not as overtly conspicuous as most titles. Throughout, there’s a restrained cyberpunk aesthetic, with deliberate graphic glitching and foes who have CRTs for heads. Sonically, the game’s individual pieces are capable, complementing the look and exposition. But collectively, there’s not a great deal of range in style across the seven-hour expedition. 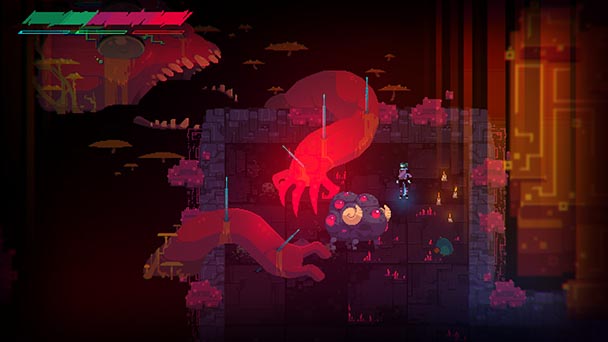 For players up to a unmitigated challenge, Phantom Trigger delivers, offering hack-and-slash gratification that demands rock-solid reflexes. Pleasingly, the title’s storyline also demands some light cerebral calisthenics, with a plotline that favors nebulousness. It’s a shame that co-developers Victor Solodilov and Denis Novikov didn’t offer an easier difficulty setting, as Trigger’s grueling level of challenge might turn off those attracted by the game’s radiant look.

Phantom Trigger was played on the PC with review code provided by the publisher.

Phantom Trigger
Platform: PC, also on Nintendo Switch
Developer: Bread Team
Publisher: tinyBuild
Release date: August 10th, 2017
Price: $14.99 via Steam (PC) and eShop (Switch), PC version is $11.99 until 8/17
Phantom Trigger review
Ambiguity is becoming increasing rare in modern games. All too often, our recreations leave little room for even an iota of doubt, devotedly explaining each play mechanic and clarifying every last plot detail. While that might sound like a beneficial trait, the recent PC release of Phantom Trigger demonstrates that a bit of equivocality can be a good thing. As other mediums have shown, abstraction can be positive attribute. Its east to spot Phantom Trigger&rsquo;s ambitions from its opening cinematic. Here, we snoop on a seemingly mundane suburban conversation between husband and wife, as the pair prepare for breakfast. But&hellip;

Summary : Make sure your skills up are up to snuff before entering Phantom Trigger’s neon-colored recesses. The hack-and-slash action is fairly unforgiving, potentially producing frustration for those attracted to the pixel-art look and hazy approach top storytelling.