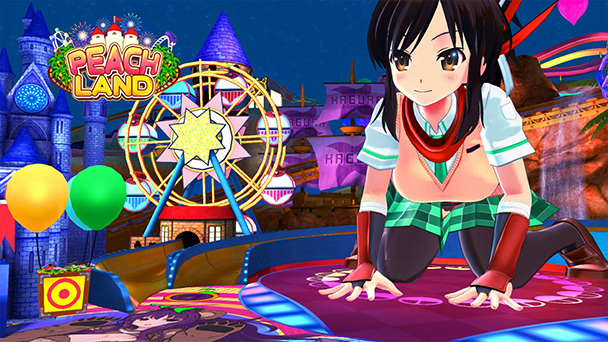 The Senran Kagura franchise is approaching a pivotal junction. Across four main entries and a multitude of spin-offs, the unabashedly cheeky series has centered on the exploits of scantily clad shinobi, extending as much cavorting as factional conflict. But Sony’s prudish policy changes have seemingly exasperated series creator and producer Kenichiro Takaki. Although he’ll assist with the development of Senran Kagura 7EVEN, a departure from Marvelous sent an unambiguous message that Takaki doesn’t appreciate the meddling of his mischievous property, potentially putting the franchise’s future in jeopardy.

For now, there’s Senran Kagura: Peach Ball. Given Nintendo’s current hands-off stance, it’s a game that still revels in the kind of playful antics that have become a series mainstay. Here, Shinagawa-based developer Honey Parade Games reinvigorates the blend of pinball with puckishness that was once a part of the pastime’s history. Classic pinball tables like Viper, Mata Hari, and Elvira and the Party Monsters managed to make a collection of mechanical parts somehow feel sexy. Removed from the confines of the analog world, Peach Ball has it easier. With a section of Kagura’s cast rendered on-screen, the rewards for hitting skill shots include cinematics like bustlines covered in ice cream. While that’s amusing the first few times you witness it, you’ll probably wish the title emphasized longevity as much as it romanticizes lasciviousness. 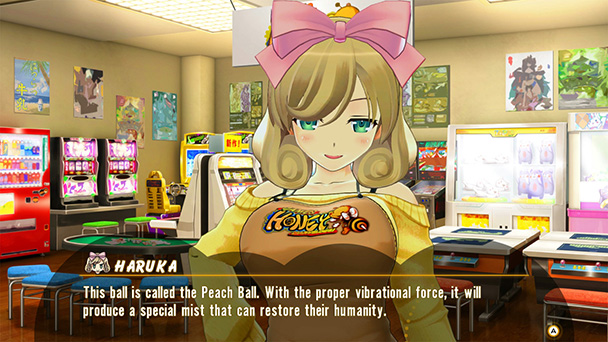 While Peach Ball’s fan-service will probably get the attention, it’s the brazenly bizarre storyline that begs for notice. The premise is rooted in Haruka’s reckless experimentation. While working at the local arcade she’s also created a concoction. It’s hasn’t been tested, so she puts the potion on the top shelf, presumably to keep it from falling into curious hands. But when Ryona mistakes the serum for cleaning fluid, things get a bit weird, and her friends Asuka, Marusaki, Yomi, and Yumi, all begin turning into half-human/half animal creatures.

Despite the obvious fetish appeal, the girls want to return to their regular form. Doing so involves having the girls straddle on top of the tables, while the vibrations of the eponymous peach ball release some kind of curative mist. And while the main storyline is wonderfully outlandish, some of the in-game banter leans toward the irreverent, which doesn’t fare quite as well. 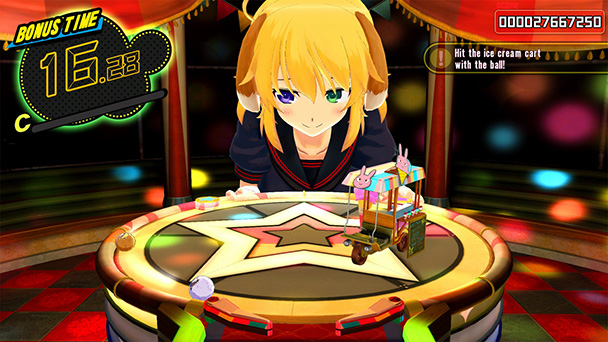 Peachy Play Despite a Scarcity of Tables

Challenge Peach Ball’s story campaign and you’ll be tasked with restoring each shinobi to their human state. Doing so involves completing a multitude of tasks, which are conveniently listed on the right side of the screen. This gameplay primarily takes place on two rather tables, Peach Land and Spooky Shinobi Park. While the game’s physics might mean toward the floaty and with eight balls per play, err on the side of lenient, there’s still the archetypal pinball features you might expect. From causing spinners to rotate to spending the peach ball speeding across ramps, there are a healthy number of targets, but just not as many as say the tables in Pinball FX 3 or The Pinball Arcade’s recreations of real-world tables.

The key feature on both Peach Land and Spooky Shinobi Park is one of Senran Kagura’s five shinobi, positioned at the top of the playfield. After completing enough objective, launching your peach ball into the girl triggers a Sexy Challenge. When this occurs, you’ll move to a smaller table, and be challenged to a mini-game where you’ll do things like bounce the ball off of the girl’s bikini-ed backside. Succeed and you’ll earn massive amounts of points and a grade. Accomplish this enough and you’ll return her to human state. Otherwise, she’ll lay prone on the table, and you can ‘bop’ her for additional points. 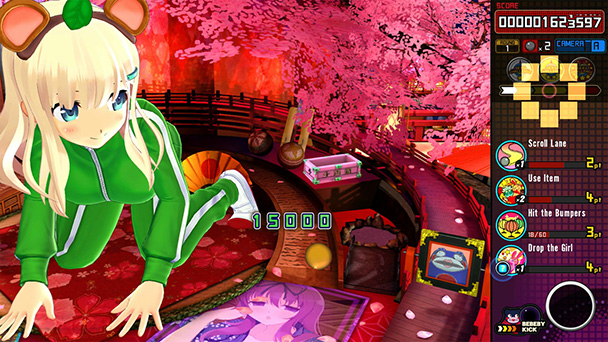 Play on the two tables is colorful, perhaps exceedingly, as it’s easy to lose track of the balls position. But it’s also thoroughly lively, with cinematics that show the ball gathering up speed, Sonic-style, or the girls in states of undress. With a thirty-frame per second refresh rare will be a bummer for those accustomed to the fluidity of Pinball FX on console or PC, the game’s tempered challenge means frustration is rare. Another upside is the game’s selection of camera perspectives, which offers six points-of-view on the action.

Senran Kagura: Peach Ball does its best to mask the shortage of tables. While different ball weighs and types don’t radically change things up, new dialog and unlockable attire help incentivize play. Here, you get to be a fashion consultant, changing the appearance of each girl, for her picture in the game’s diorama time-sink. While the specter of DLC is apparent on the game’s main screen, heading down that rabbit hole merely presents additional music options (at $5 USD apiece). 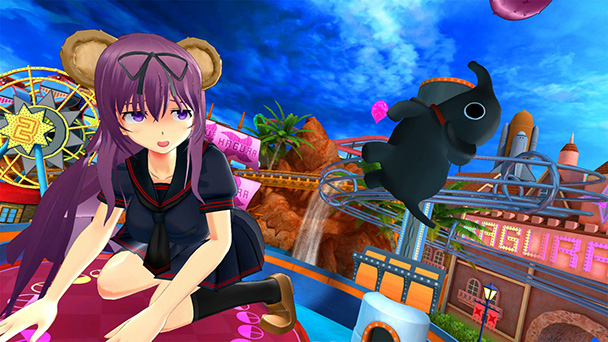 While Senran Kagura’s spin-offs have been entertaining, they’re struggled to match the quality of the main series. Peach Ball doesn’t buck that trend, yet it’s still far more entertaining than Reflexions or even Bon Appétit. More than just fan-service, the title extends a serviceable game of pinball that should please fans of the pastime.

Senran Kagura: Peach Ball was played on Switch
with review code provided by the publisher.

Senran Kagura: Peach Ball review
The Senran Kagura franchise is approaching a pivotal junction. Across four main entries and a multitude of spin-offs, the unabashedly cheeky series has centered on the exploits of scantily clad shinobi, extending as much cavorting as factional conflict. But Sony&rsquo;s prudish policy changes have seemingly exasperated series creator and producer Kenichiro Takaki. Although he&rsquo;ll assist with the development of Senran Kagura 7EVEN, a departure from Marvelous sent an unambiguous message that Takaki doesn&rsquo;t appreciate the meddling of his mischievous property, potentially putting the franchise&rsquo;s future in jeopardy. For now, there&rsquo;s Senran Kagura: Peach Ball. Given Nintendo&rsquo;s current hands-off stance, it&rsquo;s&hellip;

Summary : Senran Kagura: Peach Ball offers a decent adaptation of the steel-orbed recreation. But the game’s real draw is the scantily-clad shinobi.

Previous: Is It Wrong to Try to Pick Up Girls in a Dungeon?: Arrow of the Orion review
Next: New Releases: July 11th-17th, 2019