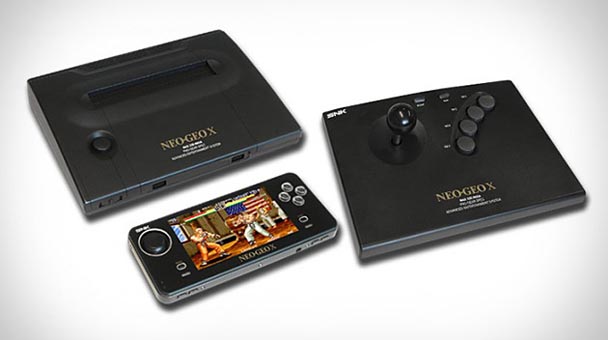 Born amidst the era of the SEGA Genesis and Super Nintendo, SNK’s NeoGeo system seized the interest of two divergent groups. A coin-op model, the MVS (Multi Video System) proved to be a boon for arcade owners- allowing up six games to be inserted into a single, space-saving cabinet. Originally designed as a rental unit in hotels and bars, the AES (Advanced Entertainment System) permitted NeoGeo titles to be enjoyed outside of the confines of dedicated gaming spaces. When word spread of the ability to enjoy uncompromised versions of game like Magician Lord, NAM-1975, and The Super Spy, hardcore gamers expressed interest purchasing a console for their homes. For them, playing $650 for the system and an additional $150+ per game was justified by having pixel-perfect adaptions brought into their living rooms.

With adept franchises such as King of Fighters, Samurai Shodown, and Metal Slug, the AES went on to become a sort of Holy Grail for gamers. When I visit my local used game depot, stacks of TurboGrafx-16, Saturn, and Dreamcast games are habitually disregarded, with diehard fans hanging out near the NeoGeo section. When the clerks turn on the AES console to test a game, a silent reverence and absorbed attention fills the floor, transforming the dusty warehouse into an extemporized cathedral. Of course, worship still isn’t cheap- as evidenced by the $1,000 price tag on the Metal Slug 4 import. 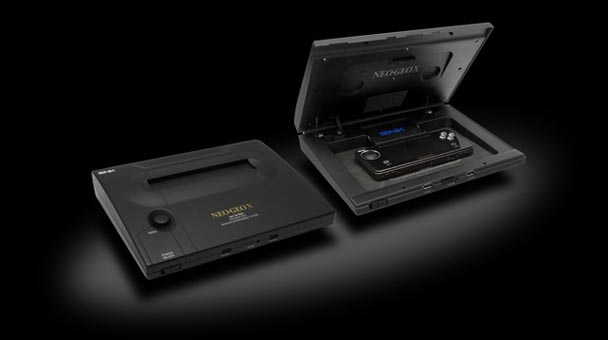 These lofty prices were undoubtedly the inspiration behind the NeoGeo X, a system which aspires to bring the glory of SNK’s beloved console to the working class. While the $200 system’s objectives are undeniably noble and the Tommo Incorporated-manufactured device occasionally indulges a bit of retro reminiscence, the NeoGeo X is undermined by a number of niggling imperfections. In our three-part review, we’ll be examining the system, the recent firmware update which purports to mend a few key faults, as well as provide a review of the recently release twenty-game Mega Pack.

Part One:  Less than Arcade Perfect

Designed to resemble the original AES packaging, the Neo Geo X ships in a substantial, protective box, ensuring an impressive first impression. Opening the carton reveals the portable peripheral, a flip-top plastic housing which resembles the original console, a single arcade stick, an AC Adaptor, as well as RCA composite and HDMI cables. Whether owners connect the Neo Geo X to a timeworn CRT or pristine HD television, setting up the system is an uncomplicated effort. 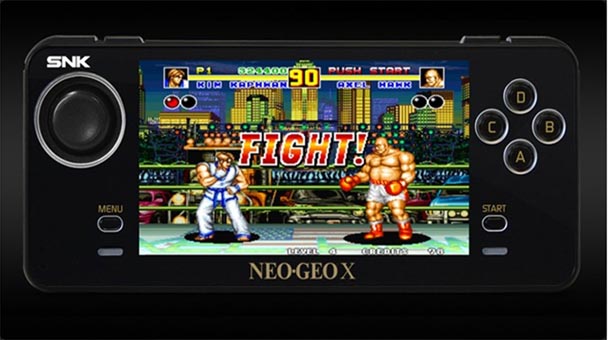 Opening up the AES facsimile, players will find the heart of the system- a device  which accommodates portable play and when plugged into a docking pad in the inside of the shell, allowing the Neo Geo Gold to output its picture to a TV. Once the peripheral has undergone a three-hour charging period, the hardware is ready to undocked, allowing its inaugural anthology of twenty games to be enjoyed on the go.

Although the ability of playing authentic Neo Geo games on the bus, train, or while waiting in line is thrilling at first, a number of niggling blemishes will likely soon be perceived by players. Most of the problems stem from SNK/Tommo’s obvious use of off-the shelf hardware. Although each game in the Neo Geo Library produced a 4:3 picture, the portable’s screen provides a near 16:9 aspect format. In execution, games can be enjoyed with proportionate pixels, or with a press of the L1 trigger, the picture can be stretched to take advantage of the full screen width. While traditionalists may scoff, most players shouldn’t find the elongated ratio too unsightly. A more troubling issue stems from the resolution adaption of the Neo Geo Gold, adapting the 320×224 resolution of the original hardware to a 480 x 272 screen. In execution, games with scrolling playfields such as Cyber-Lip and Alpha Mission II demonstrate a slight shimmering effect. Notably, colors on the 4.3 inch screen are a bit washed out, making play problematic under natural sunlight. 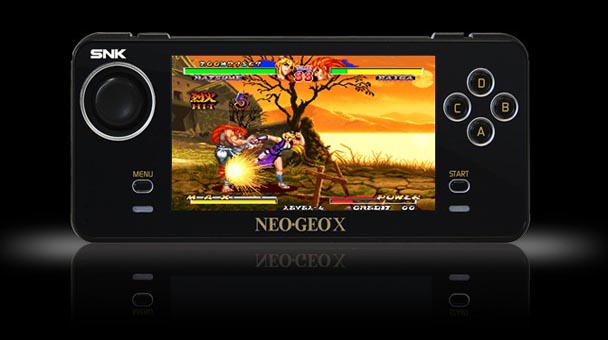 Yet, the Neo Geo X isn’t without virtue. The portable’s 8-way control nub recalls the Neo Geo Pocket’s respected click-stick, offering aural feedback at players push toward the periphery. Nicely, the feedback is robust enough to confirm quarter-circles in Art of Fighting and Fatal Fury, without being overly distracting to fellow commuters. Unlike the slippery rear of many portables, the device’s backside is constructed of texturized rubber. While the unit edge is lined with buttons, one omission would have welcome is a sleep function, much like the PS Vita, PSP and 3DS. As it stands, players hoping to take a prolonged pause are restricted to using the Neo Geo’s limited save system.

Although the NeoGeo X provides video output via a mini-HDMI port, returning the portable to its dock allows players to utilize the bundled arcade stick. Modeled after the AES’s controller, the peripheral apes the form factor of the original with a ball-topped joystick and substantial buttons. Moving the Neo Geo X stick around reproduces the distinctive clicking of its predecessor, while the familiar A,B, C, and D buttons offer a short throw and gratifying sense of responsiveness. About the only thing this reproduction lacks is a sense of weigh, sudden stick movements tended to shift the controller around in our lap. Regretfully, there’s no menu button on the stick, forcing players who want to change games to approach the console. 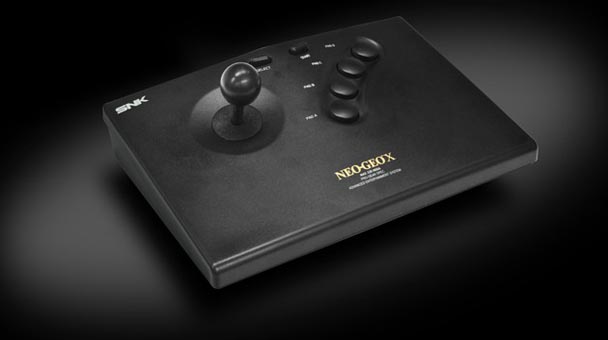 Whether using the composite or HMDI cables, image quality certainly has some aggravations. When using an analog television, colors were muddy, with oversaturated pixels bleeding into their neighbors. When a digital connection is made, the Neo Geo X doesn’t upscale, resulting in a lifeless image that lacks crispness. Puzzlingly, the system doesn’t allow owners of HDTVs to accommodate for overscan, so a segment of the peripheral’s output may perpetually be off-screen.

Other imperfections result from the Neo Geo X’s use of software emulation. Gameplay in several scrolling titles like Metal Slug and Cyber-Lip is marred by the specter of screen tearing. Sound emulation is a mixed bag- while music made by the four channel Yamaha YM2610 chip is recreated convincingly, but sound samples such as NAM-1975 ‘s “Do I have to go back To this hell again?” sound especially course. For the most part, the emulation does it best to ape the speed of the original ROM. While slowdown is present, it’s exhibited in the same places as the original MVS titles. 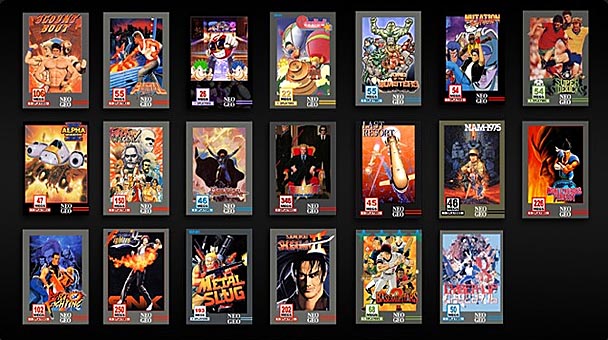 Mercifully, any issues with hardware or the accuracy of emulation are counterbalanced by the Neo Geo X’s built in library of twenty titles. There a reason why SNK’s titles are revered by collectors. The company didn’t dabble in wide variety of genres- focusing on shooters, fighters, and run-and-gun titles. As such, the Neo Geo has some exemplary entries in each genre. Last Resort is an engaging side scrolling shmup, while the inclusion of Art of Fighting, Fatal Fury, Fatal Fury Special, King of Fighters ’95, Real Bout Fatal Fury Special, Samurai Shodown II, and World Heroes Perfect demonstrate SNK’s pugnacious pedigree. Unmistakably, Metal Slug is the system’s killer app, with the underrated Cyber-Lip offering an adequate Contra-clone.

For Wii or PlayStation 3 owners contemplating the procurement of the Neo Geo X, the purchase of the SNK Arcade Classics Volume 1 compilation or SNK’s piecemeal publishing of Neo Geo titles might be a superior substitute. Although players will forgo input schemes which obey Neo Geo tradition, they’ll enjoy gameplay that’s optimized for minimal graphical slowdown and maximized visual fidelity. For those with other consoles or those who have always yearned to own an AES or MVS, the Neo Geo X is a tempting collectible. Offering a unified and standalone method to enjoy SNK’s prodigious library, several failings sully the elation of owning a small piece of arcade history.

Neo Geo X Review
Born amidst the era of the SEGA Genesis and Super Nintendo, SNK&rsquo;s NeoGeo system seized the interest of two divergent groups. A coin-op model, the MVS (Multi Video System) proved to be a boon for arcade owners- allowing up six games to be inserted into a single, space-saving cabinet. Originally designed as a rental unit in hotels and bars, the AES (Advanced Entertainment System) permitted NeoGeo titles to be enjoyed outside of the confines of dedicated gaming spaces. When word spread of the ability to enjoy uncompromised versions of game like Magician Lord, NAM-1975, and The Super Spy, hardcore gamers&hellip;