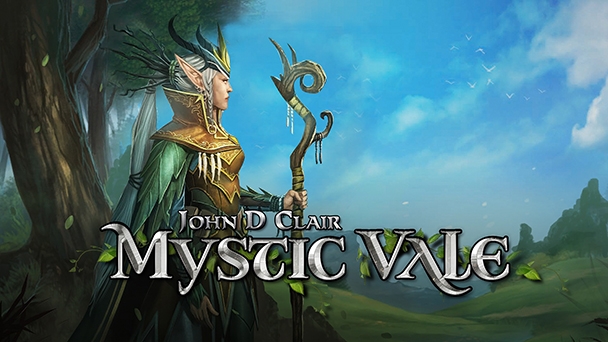 For those who appreciate cognitive calisthenics, Mystic Vale is an innovative and enchanting card game. This adaptation allows for solitary enjoyment and pass-the-Switch play, but make sure you can tolerate a few niggling issues.

Even those with only a fleeting familiarity of table-top games have probably heard of ‘deck builder’ games. Traditionally, collectable card games like Magic: The Gathering, The Pokémon Trading Card Game, Hearthstone, and Yu-Gi-Oh: Duel Links required players to purchase cards to construct a set of cards before sitting down to play. But with deck builders, you’re habitually using some type of in-game currency during the match, as you attempt to create a better hand than your rivals.

2016’s Mystic Vale introduced a revolutionary concept. The game’s card crafting system, allows players to stack transparent cards atop one another before putting these ‘power cards’ back into play. If you’re a CCG fanatic, it’s a delightfully inventive concept that will prod you into thinking in creative ways as you try to outscore opponents. For those less acquainted with the genre, the Switch adaptation makes for an embarrassment-free way to learn the intricacies. Looking back, I wish this version was around before I had embarrassed myself with experienced Vale-playing friends a couple of years ago. 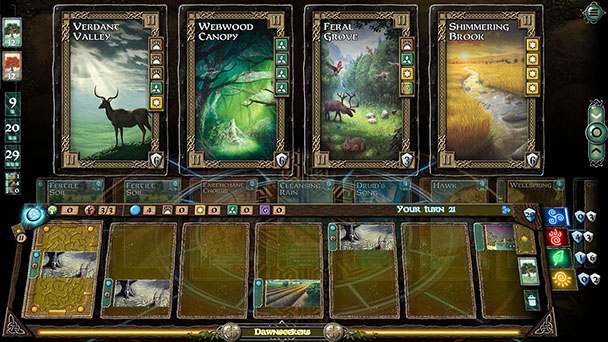 Delve into the multipart, in-game tutorial and you’ll learn that Mystic Vale is played in three, cyclic stages. These reflect the game’s agrarian pursuits, where two to four druidic clans attempt to purify a cursed landscape. During the Planting Phase, you’ll be issued card until you have a trio of ‘spoil’ symbols, which resemble a withered tree. Once this happens, you can opt to push, adding additional cards to your hand. But if a fourth spoil symbol appears, you’ll skip directly to the third phase, where everyone discards their hand. In consolation, you’ll receive a mana token, which will be explained momentarily.

The second phase is called Harvest and it’s here that you’ll count the number of mana tokens (cards have different amounts). With these, you can purchase vale cards once you have accumulated enough of four different spirit symbols. These are gained though Advancements, which are Mystic Vale’s signature layering mechanic. This is the best way to score end-of-game VP (victory points). But you’ll also want to accumulate immediate points as well. 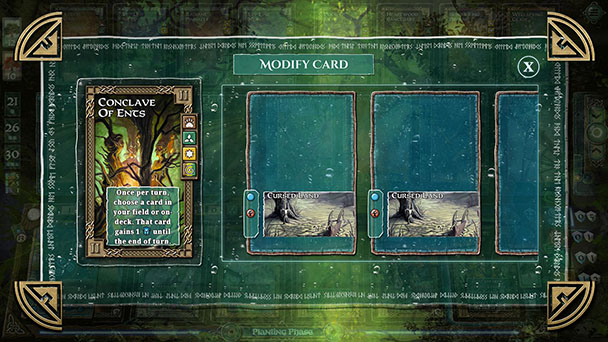 Confused? It Will Dissipate, Much like the Land’s Affliction

Yes, it might sound confusing in explanation, put gradually becomes comprehensible with hands-on experience. If you’re a newbie, each component of the game will gradually become grasped and then you’ll start thinking about strategies. Yes, it’s not for everyone, but if you thrive off cognitive challenges, resisting Vale’s enchantment can be an entirely different contest. It’s easy to see why the card game has won multiple awards.

Like any respectable card games, there’s a lot of strategy to be found. Early on, you’ll have to balance resource building with point building. Attempting to get an early scoring lead, and you’ll find yourself struggling in the late game. Similarly, if you don’t negate the decay symbols that accumulate in your deck, you’ll be unable to add more than a card or two without spoiling. You’ll really have to think about your immediate and long-term goals if you want to be competitive. But that said, once a player takes an early lead, if can be infuriatingly difficult to catch up.  If you plan to play online, expect the occasional quitter to tarnish the delight of victory. 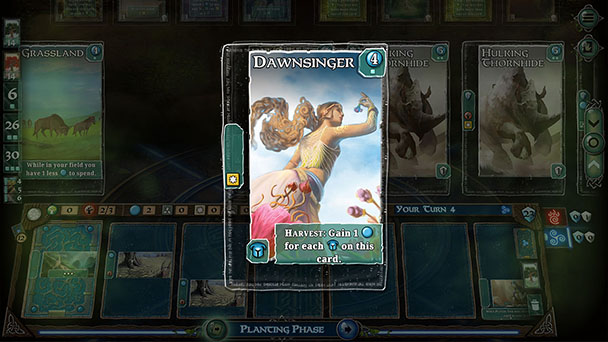 Agreeably, developer Nomad Games builds on the coding used by their 2019 Steam adaptation. Largely, it’s a proficient port, capturing the attractive artwork of its source material while an innocuous soundtrack circumvents annoyance for the game’s 45+ minute playtimes. Although the base game bundles the “Vale of Magic” expansion, menus flaunt the availability of two $7.49 DLC packs that contribute new cards.

Without the benefit of mouse input, the Switch version requires players to use the left Joycon, directional buttons, or the touchscreen for interaction. Unfortunately, neither seem ideal. Occasionally, menu highlighting disappears when using the former two methods, which can be frustrating. While tapping the Switch’s screen, we encountered two soft crashes that ended our game. Fortunately, Mystic Vale auto-saves after every turn, but receiving a system notice asking if we wanted to report the bug was disheartening. 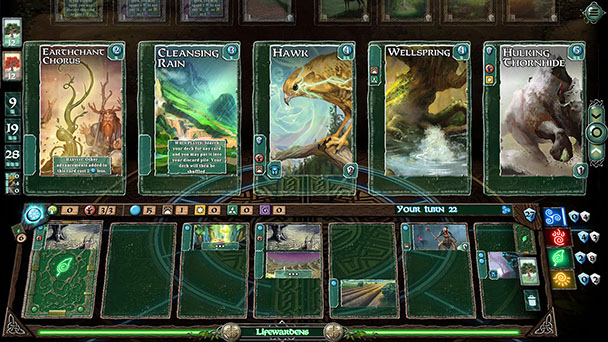 Mercifully, these inconveniences didn’t completely tarnish our time with Mystic Vale. Nomad’s adaptation was a fine tutor, provided the interactivity that YouTube lessons lacked. Without friends available to compete with, the AI served as a suitable stand in, with four difficulties levels to test strategies. Alternatively, online play was another option, especially if you have e-acquaintances who can be trusted not to quit when things look unfavorable. Even pass-the-Switch local multiplayer has it merits, enabling rivalries where there’s scant table-top space.

Mystic Vale was played on the Switch with review code provided by the publisher.

Mystic Vale (Switch) review
For those who appreciate cognitive calisthenics, Mystic Vale is an innovative and enchanting card game. This adaptation allows for solitary enjoyment and pass-the-Switch play, but make sure you can tolerate a few niggling issues. Even those with only a fleeting familiarity of table-top games have probably heard of &lsquo;deck builder&rsquo; games. Traditionally, collectable card games like Magic: The Gathering, The Pok&eacute;mon Trading Card Game, Hearthstone, and Yu-Gi-Oh: Duel Links required players&hellip;

Summary : Hopefully, Nomad Games can patch Mystic Vale’s user interface and sporadic crashes, because the convenience of automatic scoring and rule-keeping makes this a worthy adaptation of an exceedingly clever card game.