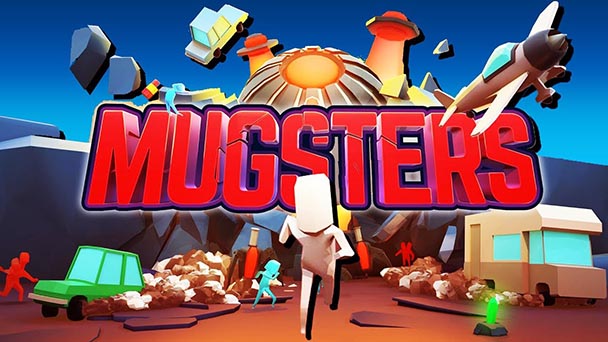 Mugsters is a difficult game to review, since enjoyment stems from the game’s sense of discovery. Reveal too much of the experience, and you’re ruined the thrill in being dropped in an unfamiliar world and learning how to progress. Suffice to say, if you’re a fan of physics-based puzzlers with organic solutions, it’s probably worth the fifteen-dollar asking price. And any recommendation grows stronger in relation to the amount of any future discount.

If you do want to know more, then read further (slight spoilers ahead) 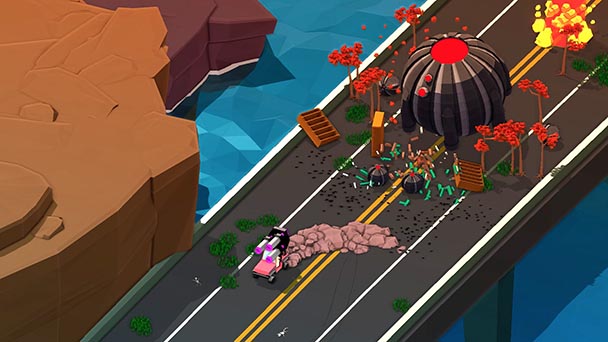 Much of the Mugster’s enjoyment stems from the game’s purposeful sense of unfamiliarity. Without an iota of exposition, the game drops you off on a garishly colored landmass, where mustard-colored beaches and flanked by vermilion mesas. Yet, the landscape isn’t completely organic. Explore the games’ hub-world and you’ll discover other oddities. There are unmanned rollercoaster carts wired to a distance garage, and similarity there’s a network of portals that can teleport you into the game’s collection of twenty-five stages. The look is low-poly and manages to be both exotic yet evocative.

Venture into one of these and you’ll be transported to islands dotted with walls, pressure switches, traps, explosive barrels, and an assortment of vehicles. As the game’s stick figure protagonists wanders around you’ll likely notice that the game’s control system is intentionally off-putting as well. Experiment (or spy the game’s control map screen) and you’ll discover the ‘Y’ button is used to pick up an object, while the ‘X” button tosses it. While you’ll quickly acclimatize to the input method, the initial discomfort is part of Mugsters’ experience. 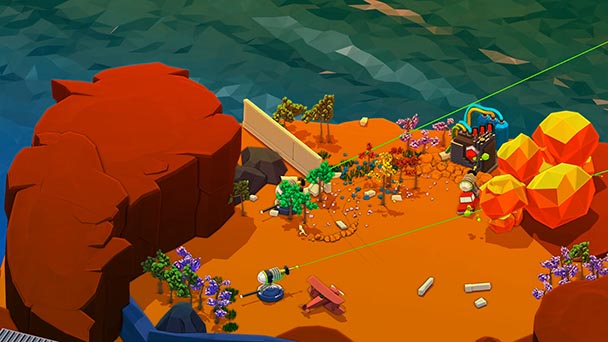 Unsurprisingly, there’s no ham-fisted tutorial, describing every detail. Instead, understanding what to do gradually emerges, as Mugsters sneakily places objects in your line of sight that plea for experimentation. The game’s most brilliant technique is to offer multiple, natural solutions to a problem. That wall that’s keeping you from collecting that pulsating crystal? You can hop into a sedan and plow through it or toss one of those red barrels near, triggering an explosion. The rest of Mugster’s stages riff on this idea, gradually adding more playthings to the formula like a giant laser turret or a pile of spiked logs that will collapse when a trip wire is broken.

Beyond basic cars, there are vans, busses, utility trucks, and the persistent presence of a plane to zoom away and start the puzzling anew on another island. The game’s physics ensure that the four-wheeled craft have weight and are drift heavy. Given the speed of vehicles and the abundance of cliffsides, you’ll usually want to take things slow, save for when you’ll need to use a ramp to clear a chasm, or a UFO is in hot pursuit. Yes, Mugster’s islands have antagonism, but the fighting is rarely the focus. Instead, conflict is usually employed to keep the pace lively. Backhanding the game’s two-headed aliens results is a satisfying splatter. 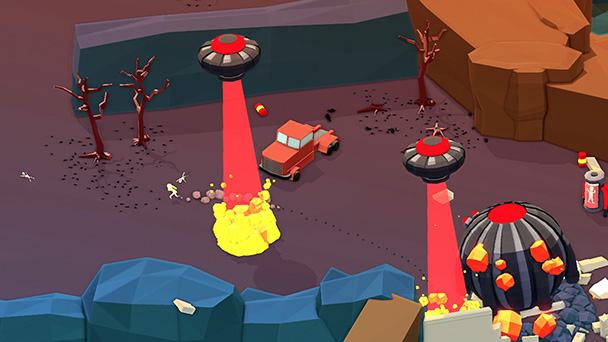 But the game’s extraterrestrials aren’t the only ones who are prone to physical damage. Each island has a fundamental main goal from sabotaging alien generators to plugging in a giant power plug into a socket. Additionally, progress entails the completion of two secondary goals: rescuing humans and the collection of crystals. The former is a challenging task, because your allies are vulnerable and not very bright. If breaking them from sealed containers doesn’t kill them, they’ll perish from lackluster pathfinding and get left behind on a corner of the environment. To liberate them, they’ll need to board your escape craft before you leave the level, so make your all your companions are in tow.

Even crystal collecting has its own oddities. Occasionally, I’d be toying around with explosives and the blast would send the glowing items inside a rock formation making them impossible to gather. On the upside, Mugsters is lenient, replaying a level retains any met goals. Occasionally, the game’s physics will provoke, with cars that drive on their own after you exit them, or objects that move after you use them to activate a flip switch. But it was rarely severe or common enough to really irritate me.  Instead, it seemed to be just another strange part of Mugsters’ bizarre world and produced some laughs during the game’s local co-operative sessions. 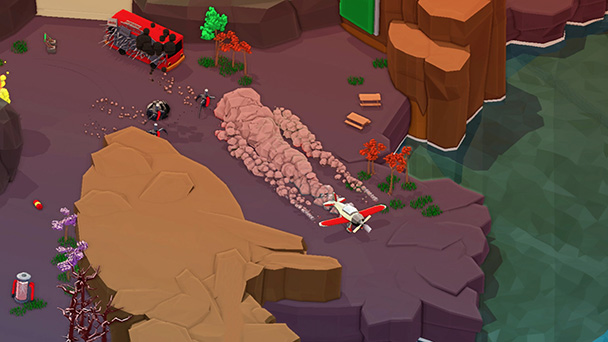 Mugsters review
&nbsp; Mugsters is a difficult game to review, since enjoyment stems from the game&rsquo;s sense of discovery. Reveal too much of the experience, and you&rsquo;re ruined the thrill in being dropped in an unfamiliar world and learning how to progress. Suffice to say, if you&rsquo;re a fan of physics-based puzzlers with organic solutions, it&rsquo;s probably worth the fifteen-dollar asking price. And any recommendation grows stronger in relation to the amount of any future discount. If you do want to know more, then read further (slight spoilers ahead) Much of the Mugster&rsquo;s enjoyment stems from the game&rsquo;s purposeful sense of unfamiliarity.&hellip;

Summary : Mugsters’ delight is rooted in the sense of discovery. If you appreciate puzzlers where you own sense of curiosity is as deadly as any antagonist, make a stop on this archipelago.