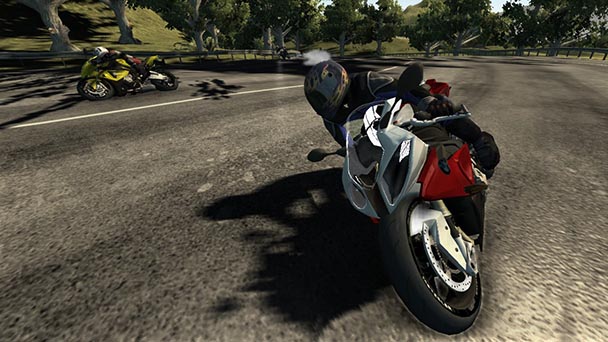 Few games in the PlayStation 4 library are as perplexing as Motorcycle Club. Between Big Ben Interactive’s logo (publisher of WRC 4 – FIA World Rally Championship) on the loading screen and the inclusion of licensed bikes from manufacturers like Kawasaki, Suzuki, and Yamaha, there are a number of signs which suggest at least a trace of simulation. Yet, proceed toward one of the game’s decidedly fabricated tracks and you’ll find a number of elements that reveal Motorcycle Club’s true form: an unapologetically frothy racing experience.

There’s nothing wrong with simplified mechanics- franchises like Ridge Racer, Burnout, and a myriad of kart racing titles have successfully shirked a recreation of real-world physics, establishing gameplay that’s both accessible and exhilarating. But Motorcycle Club flubs the fundamentals, delivering a lifeless amalgam of jerky control, a tepid implementation of design decisions, as well as a droning, uninspired sonic delivery. 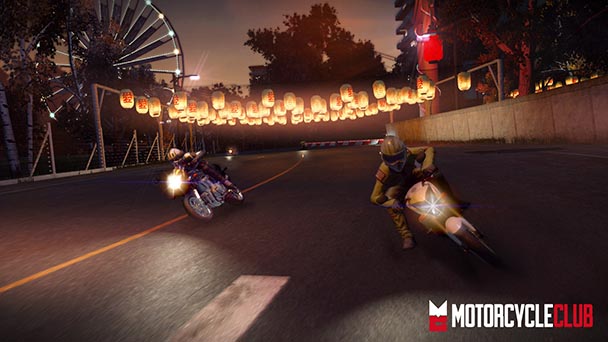 Venturing into Motorcycle Club’s racing component reveals the first of these imperfections. Here, players can challenge a pack of CPU-controlled racers in either a tournament or a single stage. Following a protracted load time for each track, riders will discover another troubling blemish when venturing into their first curve. Instead of the graceful arc and rider lean exhibited by two-wheeled titles such as Moto GP and SBK X Superbike World Championship, Motorcycle Club often moves in disorienting shudders. Sinuous road-hugging races through s-curves can abruptly shift the camera, making the title feel like it’s still an early build, rather than a polished retail product.

Of course, this rapid changes in perspective most commonly occur when riders are atop of a nimble Superbike, a cycle that trades maneuverability for raw speed. Motorcycle Club’s principal hook is that players aren’t limited to just one type of bike in a race. With a press of the shoulder buttons, they can instantly switch to a another variety of cycle, with a transition not far removed from Marvel vs. Capcom’s tag-teaming. Naturally, each type of vehicle has its own benefits and weaknesses, with the Custom tearing across uneven track, while sacrificing a significant amount of speed. Alternatively, there’s also the jack of all trades Roadster bike, which offers a bland balance of power, handling, and functionality. 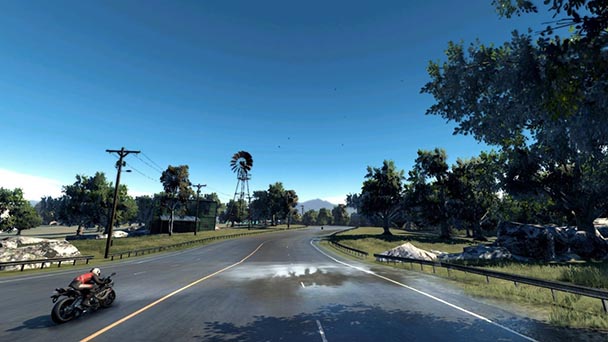 Switching between bikes might have been an interesting mechanic if its implementation wasn’t so unsophisticated. See a patch of potholed road up ahead? It’s obvious that you need to swap in your terrain-grinding Custom. As if the sight of your Superbike straining to cross the rutted roadway wasn’t enough, Motorcycle Club delivers color-coded icons so you don’t overlook the evident. Strangely, shifting between bikes is an ability limited to players; AI racers are forced to traverse the tracks with a single cycle, which tends remove a sense of urgency from game’s overly tranquil 100+ stage tournament.

As if bring first to cross the finish line wasn’t easy enough, Motorcycle Club gives players other ways to succeed. A scoring system goads players into auxiliary tasks like performing wheelies on straightaways, maximizing jump distance on the ramps that appear on courses, or sideswiping the border of the track. Given that the braking on the Superbike and Custom is inexplicably soft, the latter objective is essentially involuntary. Activities like prolonged wheelies, extended jumps, and slipping into an opponent’s wake fill the game’s Mission component, also offering currency when each undertaking is accomplished. But beyond buying 22 additional bikes, there’s not real tinkering to be done in Motorcycle Club’s garage. 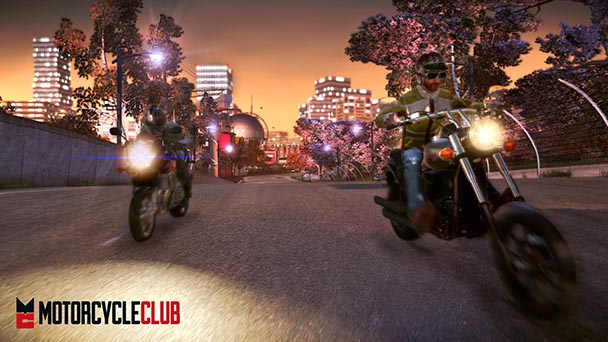 Similarly, the game’s eponymous multiplayer component seems undeveloped. Although players can select from one of fifteen emblems and customize the color of their apparel and helmet, there’s very little else to establish a sense of community in Motorcycle Club. The game’s competitive multiplayer component extends the requisite options for Quick Matches, Public, and Private races, and while matches were lag-free, the scarcity of participants threatens to mar the game’s online component.

Motorcycle Club fares best in its visual output. If players can look past the jerky camera, they’ll find beauty in each of the game’s selection of ten tracks. Each is outfitted with a number of niceties, from trees that sway in the breeze to commendable lighting model that provides an agreeable approximation of gold-hued rays while real-time shadows cast on the riders. Although the game’s visuals aren’t likely to garner awards, they are attractive enough to push sales based on back of the box screenshots. Sonically, the game’s isn’t as proficient with generic metal that plays as players navigate a UI cribbed from DiRT. During races, the soundtrack is muted, with generic engine whines and limp crash sounds replacing the clamor of powerchords. 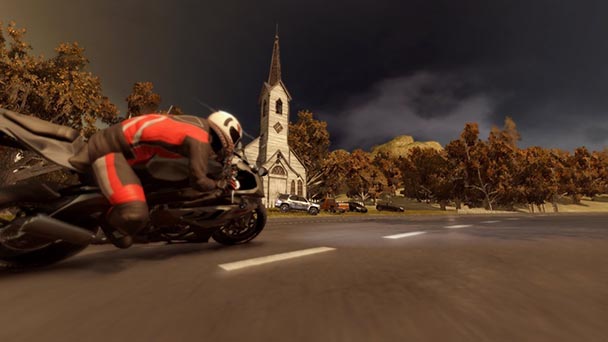 While developer Kylotonn Entertainment (Bet On Soldier: Blood Sport, Speedball 2 Tournament) should be complimented for attempting to add a distinctive racing experience to the PlayStation 4 library, racing is a slog from start to finish. Attractive screengrabs and licensed bikes might make the title seem like a contender, but woefully, Motorcycle Club limps along like a battered $20 streetbike buried in the Craigslist classifieds.

Motorcycle Club was played on the PlayStation 4 with review code provided by the publisher.

Motorcycle Club
Platform: PlayStation 4, also on PC, PS3
Developer: Kylotonn Entertainment
Publisher: Maximum Games
Release date: January 20th, 2015
Price: $29.99 PS4, $19.99 PC, PS3
Motorcycle Club review
Few games in the PlayStation 4 library are as perplexing as Motorcycle Club. Between Big Ben Interactive&rsquo;s logo (publisher of WRC 4 - FIA World Rally Championship) on the loading screen and the inclusion of licensed bikes from manufacturers like Kawasaki, Suzuki, and Yamaha, there are a number of signs which suggest at least a trace of simulation. Yet, proceed toward one of the game&rsquo;s decidedly fabricated tracks and you&rsquo;ll find a number of elements that reveal Motorcycle Club&rsquo;s true form: an unapologetically frothy racing experience. There&rsquo;s nothing wrong with simplified mechanics- franchises like Ridge Racer, Burnout, and a myriad&hellip;

Summary : The prospect of joining the Motorcycle Club for a one-time dues fee of thirty dollar might be enticing, but your money might be better spent convening with organizations such as Driveclub or The Crew.