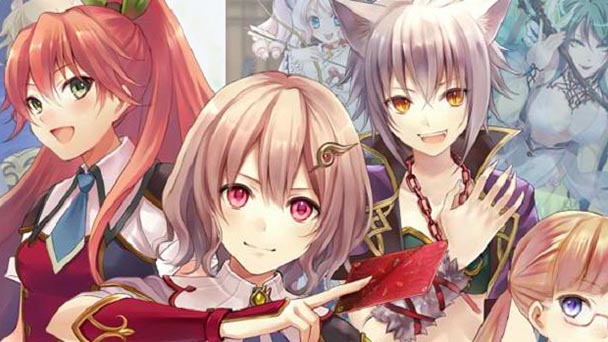 Periodically, it seems developers enjoy putting players in discomforting situations. From Feel the Magic: XY/XX’s simulated CPR, which prompted gamers to blow into their DS microphones to No More Heroes’ beam katana recharges that forced us to jerk our Wiimotes and Move controllers in a suggestive manner, we’ve been asked to perform some pretty awkward acts. Undoubtedly, Monster Monpiece for the PS Vita will be remembered as the game that elevated embarrassment even further when the title encouraged a bit of simulated self-pleasure in public. 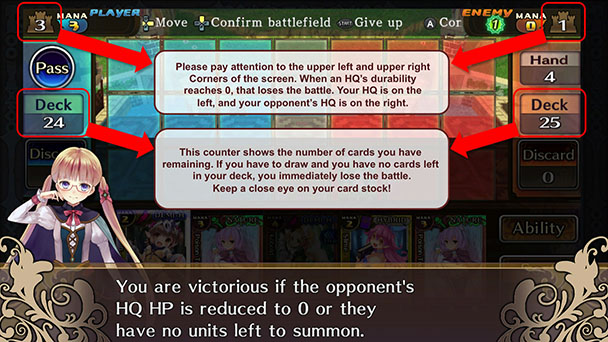 A perfunctory scrolling text-based sequence expresses the game’s backstory, articulating a shifting tide of tensions between mankind and monster in a realm called Yafaniel. Long ago, humanity’s ruthless dominance was punished by the release of monsters into the world. When these beasts began committing atrocities of their own, they were castigated and forced to live in the bodies of humans, thus limiting their powers and sowing the seed for an alliance between the two factions. Realizing the potential for a symbiotic relationship, academies began to emerge, where humans learned to utilize the abilities of beasts through card-based battles.

The game’s plotline extends a quartet of likable principals, with character development and exposition handed through mercifully germane and adeptly localized dialog sequences. Within the first half-hour the game reveals the substance of its storyline- which involves the self-actualization of a second-guessing character as well as another protagonist becoming cursed, thereby endangering Yafaniel‘s fragile balance. While the plotline’s trajectory is fairly predictable, that decision proves to be beneficial, allowing gamers to devote their attention to Monpiece’s combat component. 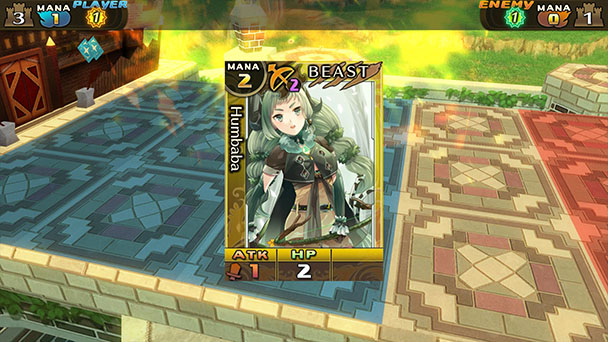 Moving along an overworld map of networked nodes, players encounter locations which bestow currency, cards, conversation, or combat. The latter transports gamers to a seven by three grid, with ally and enemy bases located on opposing peripheries. Drawing from a mana pool, each opponent takes turns placing monster cards on their section of the battlefield, with their selection transforming into four types of characters: melee, ranged, healer, and buffer units. Naturally, sword swinging melee characters have strong attacks against any enemies in an adjacent square, while ranged units carry bows which allow them to pierce outlying opponents. Meanwhile, healers and buffers function as supportive units, restoring health or improving the power of attacking characters directly in front of them. Remarkably, units aren’t locked into a singular position on the grid, and if there’s no enemy in front of them- they’ll advance toward their rival’s headquarters. Allowing a unit to reach the enemy endzone deducts hit points- and enough are HP are removed, the owner of the besieged base loses the match.

Wisely, Monster Monpiece doesn’t frontload explanations of additional mechanics, favoring a slow tickle of instruction. Gradually, players will discover many new nuances, from the ability to fuse together two of the same units into a statistical powerhouse to bonuses bestowed by laying down a succession of multiple cards of the same color. While Monpiece forsakes the customary non-character boost or burn cards, the game does provide nuance in two types of unit skills as well as customizable item usage. Largely, the title does a great job at educating the player without having to sift through a torrent of tutorial screens. Likewise, the game’s learning curve is especially generous, leisurely increasing the level of challenge so players won’t collide into an impenetrable wall of challenge. 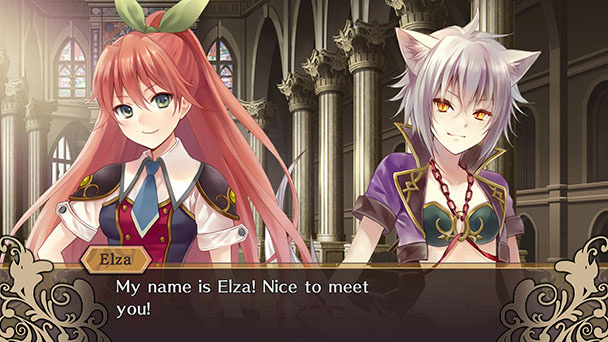 Whether enjoying the lengthy single-player campaign, constructing an effective collection of cards is undeniably advantageous. Pleasingly, customization imposes only three limitations: your deck must have between thirty and forty cards, can have no more than three of the same units and must have no more than three rare-ranked cards. Thoughtfully, gamers can build, name, and tweak a number of separate decks, allowing for a multitude of strategic approaches.

Once players enter the game’s second chapter, they become privy to First Crush Rub. Here players can increase the stats of any of the cards by paying a premium of in-game currency. Once a card is selected and the proper price is paid, a timer gives gamers a limited amount of time to increase a tension gauge.  Missing is the enthusiastic touchscreen stroking, tapping, and pinching, replaced with a mini-game that has you clicking and dragging erogenous zones with your mouse. While the eruption of hearts, stars, as and orgasmic utterances is the same as the Vita version, mousing around just isn’t as amusing. The option for Touchscreen input for capable laptops would have been a welcome option. 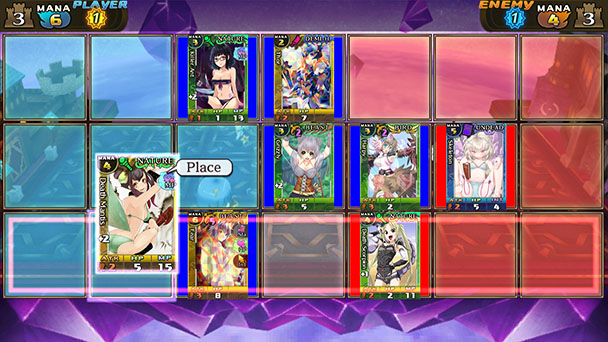 Successfully locating and lavishing the amorous areas can summon Otton the self-proclaimed “wandering panty hunter” Seal (who is also in Monpiece sequel Moero Chronicle) for a mode referred to as Extreme Love mode, where the gauge’s summit can be reached faster. Reaching this apex not only increases a card’s base stats, but has the side effect of removing a few articles of clothing. Pleasingly, the fourth-tier cards were considered too racy for the PS Vita make an appearance here. What doesn’t make the cut is the game’s multiplayer options, which might limit Monpiece’s long-term appeal. Right before release, controller support isn’t working, with on-screen button prompts appearing but actual presses have no effect.

From a maiden/monster who gradually steps out of her the confines of her kappa costume, a captivatingly cute antgirl, several shimapan-showing characters, and even cameos from Compile’s other titles, the game is nothing short of a visual feast for otaku, exhibiting the prowess of a number of Japanese artists. Dialog screen scale pleasingly to PC, with 1080p output, and while the low-poly battles certainly won’t test the capabilities of Pascal GPUs, the restrained output allows Monpiece to scale to most machines. Although Monpiece’s sonic palette isn’t quite as prodigious as Compile Heart’s other efforts, the game does provide a span breadth of ear-pleasing musical styles. 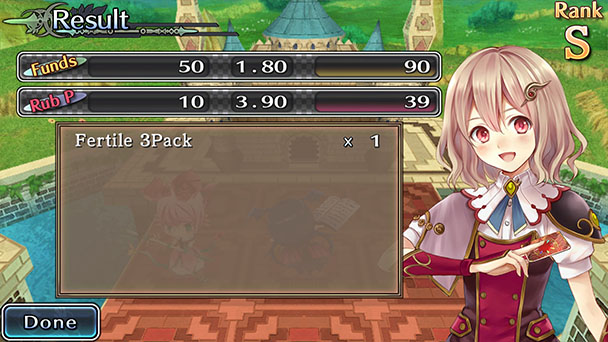 Sure, Monster Monpiece’s signature mechanic has been diluted on desktops, laptops, and tablets. Using a mouse to click on monster-lolitas just doesn’t feel as mischievous. Additionally, the loss of multiplayer is disheartening. But on the upside, having uncensored images will big a big plus for the fanbase, making this quirky title an easy recommendation.

Monster Monpiece was played on PC with review code provided by the publisher.

Monster Monpiece
Platform: PC
Developer: Compile Heart, Idea Factory
Publisher: Idea Factory International
Release date: March 14th, 2017
Price: $14.99 at launch, regularly priced at $19.99, available via Steam
Monster Monpiece (PC) review
Periodically, it seems developers enjoy putting players in discomforting situations. From Feel the Magic: XY/XX&rsquo;s simulated CPR, which prompted gamers to blow into their DS microphones to No More Heroes&rsquo; beam katana recharges that forced us to jerk our Wiimotes and Move controllers in a suggestive manner, we&rsquo;ve been asked to perform some pretty awkward acts. Undoubtedly, Monster Monpiece for the PS Vita will be remembered as the game that elevated embarrassment even further when the title encouraged a bit of simulated self-pleasure in public. Certainly, for some players the obligation was a deal breaker. After all, becoming a meme&hellip;

Summary : If the idea of Magic the Gathering outfitted with a lavish quantity of moé sounds good, you’ll want to pick up Monster Monpiece immediately. Although hardly revolutionary, the game’s impish charms and solid mechanics are bound to rub fan-service enthusiasts just the right way.