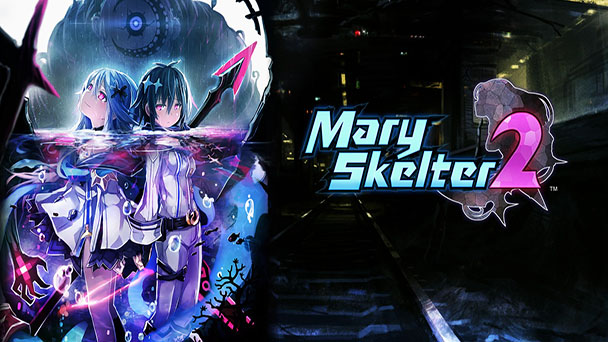 While it’s great to see Idea Factory/Compile Heart’s grisly dungeon crawler makes its way onto PC monitors, the lack of graphical options and the removal of fan-service tarnishes the experience. 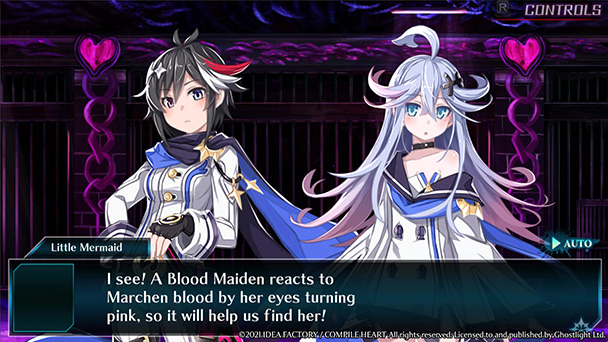 Media industries have a tendency of watering down transgressive works. Take Children’s and Household Tales, the 1812 collection of folktales assembled by the Grimms Brothers. Far removed from the modern versions we might associate from studios like Disney, many of these stories depicted shocking acts of sexuality and atrocious violence. From the predatory actions of the Wolf in Little Red Riding Hood to the pain and bleeding endured when The Little Mermaid dances, it’s little wonder writer John Updike called these stories ‘pornography of an earlier age.’

These were home-spun yarns intended to shock and frighten, not just pack families into the local multiplex. But now these characters are often associated with bowdlerized revisions that have omitted the one constituent that made them compelling. Moralistic lectures rarely withstand the tests of time, but the thrills of sex and violence unvaryingly endure. At least until corporate gatekeepers determine that age-old thrills are too intense for today’s audiences. 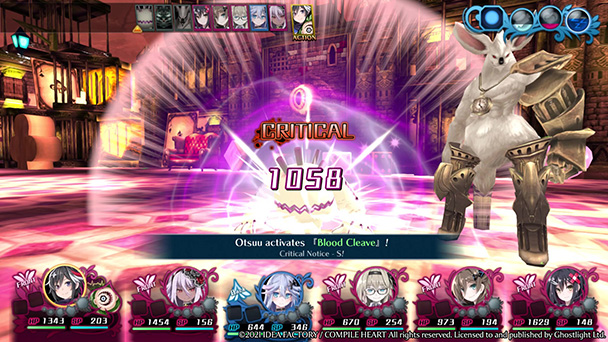 While it would have been gratifying to see a balance between Western and Eastern characters (possibly incorporating yōkai like Yuki-onna), Skelter 2’s collection of Blood Maidens are a fascinating faction, with personalities and motivations far richer that the original folktales. For one, the game revolves around madness, with any of the Maidens turning to maniacs by the continued splatter of enemy blood. But this psychosis can be taken too far, and Blood Skelter mode means they’ll indiscriminately attack foe and friends, putting the entire party in serious danger. After years of teammates being determinedly dependable, it’s invigorating, albeit perilous, to see a comrade go crazy. 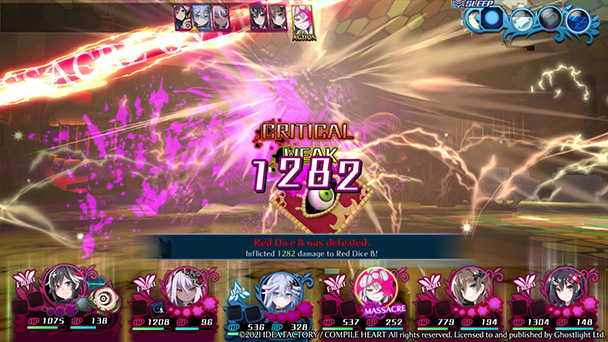 Like the previous game, Mary Skelter 2 is set in Jail, which is not the dingy holding facility its name might imply. No, Jail is a living, sentient hellhole, born from a cavernous shaft that formed in the middle of a nondescript city. It’s split into different, vibrantly colored areas, each protected by a beast referred to a “nightmare”. Given their often-terrifying appearance, the moniker is an apt descriptor. Terrors also exist in the form of Marchens, the surrealistic terror that roam its expanses, eager to slaughter any creature they encounter.

Attempting to subsist among these frights are Otsuu and Little Mermaid, a betrothed couple who are part of a group known as Dawn. Early on, a glimmer of hope glimmers in the disheartening dystopia, when the duo saves Alice and Jack while on a reconnaissance mission. But optimism is quickly extinguished when Alice violently going into Skelter Mode, injuring those around her, and knocking Otsuu, Little Mermaid, and Jack downward. The latter suffers the most, transforming into an inarticulate, vine-shrouded half-Nightmare. 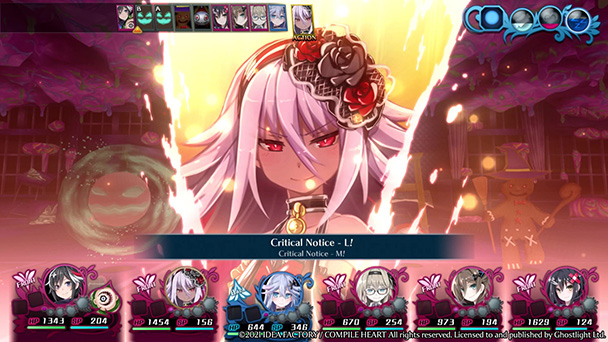 With dialog told through visual novel-like sequences, Skelter 2’s dismal setting is habitually lightened by comical character banter. Given that the game’s Blood Maidens can execute Blood Skills by licking the hemoglobin off each other bodies, it’s not surprisingly to find Compile Heart using the exchange of bodily fluids as a source for laughs. Even after investing a multitude of hours into the original Mary Skelter (which is bundled, complete with some quality-of-life improvements), those jokes never tire.

Largely, the game’s dungeons stay relatively engaging as well. Like any respectable DRPG, your entire party moves through gridded, three-dimensional labyrinths, while guided by a handy auto-mapping feature. Expect puzzles and traps aplenty, from spikes that shoot out of the ground, exposed cavities that injury your party should you fall, to switches that need activating before a remote door opens. While Marchens are a persistent threat, it’s the Nightmares that will undoubtedly quicken pulses and produce a sense of panic. 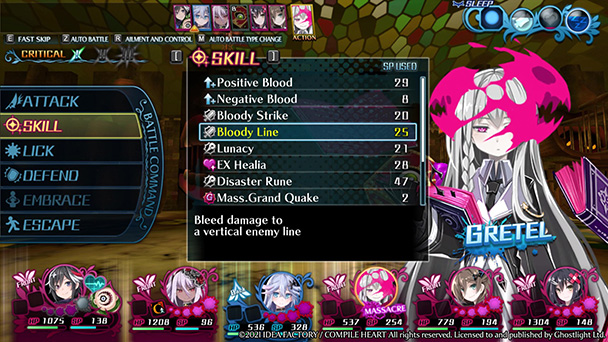 Reaping What You Sow

Proceeded by a haze of white mist, these echo the formidable FOEs of the Etrian Odyssey series. Once the miasma thickens, your party will want to get out of the area as quickly as possible, losing the burly pursuer in the process. Eschewing the system of gridded movement that you’re confined to, Nightmares constantly advance on you, even if you’re looking at the game’s menu or busy with a battle. They can be stunned, but not killed, meaning you can expect death if they chase you in a corner. And there’s a good chance they will trap you. Play Skelter 2 on its highest two difficulties and your mini-map will disappear after detection. This turns into true role-playing, as you’ll likely feel the same kind of panic as your party members.

As least for Marchens, you have a few tools in your disposal. Weapons with a ‘bloodshot’ quality can produce the Kagome Kagome effect (based on a Japanese children’s game), causing enemies to bleed profusely and become spun around. For players yearning to build up their inventory, planting crystals recovered in combat can produce Blood Flowers. Once harvested and ideally drenched regularly with Marchen fluid, they can produce rare items, rewarding the time it takes for cultivation. One character can even reap entire fields at a single time, increasing the change for exotic objects even more. 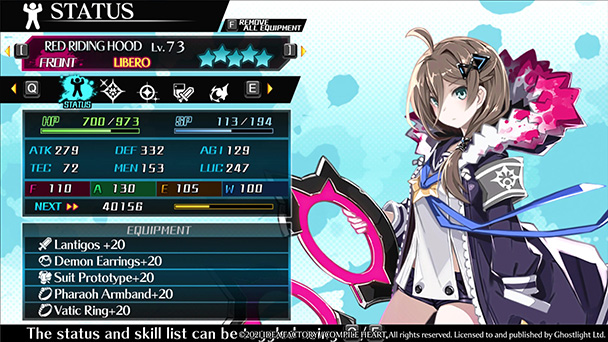 Naturally, you can also nurture your Blood Maidens. Each can adopt one of five different jobs- from Archers who are adept at ranged attacks to Scientists who are privy to specialized skills. In execution, this helps Skelter 2 strike a gratifying balance between synergistic pre-made teams and a cast of user-created characters. Pleasingly, your vocation isn’t just a simple tech-tree, with elements like abilities, equipped weapons and armor, and even occupation itself facing into your appearance. Another perk are Blood Packs, which when found in dungeons unlock skills across your Maiden team.

Those aren’t the only managerial duties you’ll undertake. One interesting activity is earning Jail Pieces to weight a game of roulette in your favor. Satisfy Jail’s trio of desire and you’ll earn fragments that can heal players or even dish out damage to foes. When the Blood Maidens drop into Blood Skelter Mode, they’ll become corrupted. 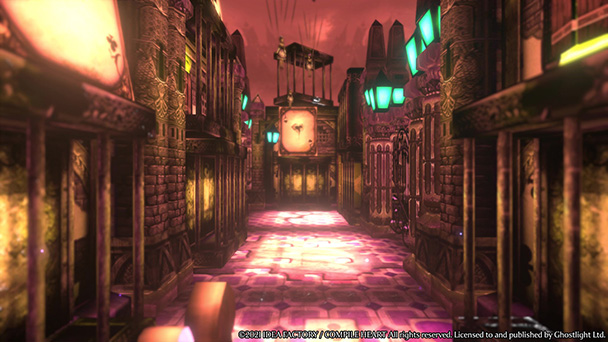 Unfortunately, you won’t be able to engage in a bit of fan-service. While the Switch iteration had you scanning and touching a Maiden’s body to remove pink-colored liquid, the suggestive mini-game got taken out of the Asian PlayStation 4 release. Whether Valve is copying Sony’s stance or whether the PC version is a straight-ahead port of PS4 version is unknown. But do know that Purification has been removed. Sure, it was only a tiny fraction of original game’s playtime, but it provided the kind of puckishness that’s customary in Compile Heart’s efforts.

Largely, Ghostlight’s PC porting is tolerable, soiled by a few troublesome issues at launch. While the game purposed to scale up to 4K, differentiating between 2160p and 1080p output is tough. Unlike the adaptation of the first Mary Skelter, the game’s visual options can’t be adjusted. Given what seems like assets from the original Vita iteration, the lack of anti-aliasing adjustment is perplexing. On the upside, most users probably won’t need to optimize their output; the game delivered 60FPS on an antiquated i3. 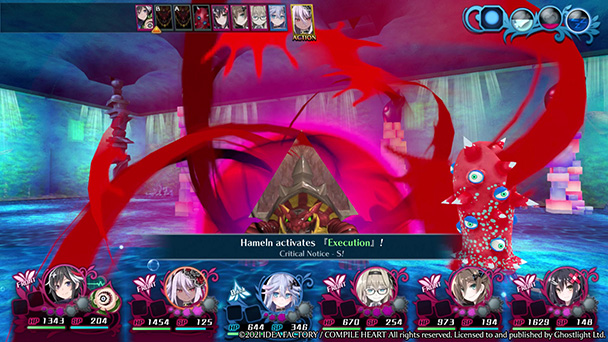 One downside to Skelter 2’s myriad of mechanics is learning how they all work. For those who didn’t play the original game, the first couple hours of the game are going to be interrupted by a succession of tutorial screens. Alternatively, those who played Mary Skelter: Nightmares will have it easier, as there are quite a few recurring components. Other that an increase in difficulty, the sequel also feels more iterative rather than innovative. While the result isn’t the kind of half-step the industry sporadically puts out, Mary Skelter 2 could have taken just a few more thematic and mechanical risks. And at the very least, Purification should have been an option for the PC port.

Mary Skelter 2 was played on PC with review code provided by the publisher.

Mary Skelter 2 (PC) review
While it&rsquo;s great to see Idea Factory/Compile Heart&rsquo;s grisly dungeon crawler makes its way onto PC monitors, the lack of graphical options and the removal of fan-service tarnishes the experience. Media industries have a tendency of watering down transgressive works. Take&nbsp;Children&rsquo;s and Household Tales, the 1812 collection of folktales assembled by the Grimms Brothers. Far removed from the modern versions we might associate from&hellip;

Summary : Mary Skelter 2 rescues a collection of classic folklore characters from the doldrums of big media. It’s lascivious, a bit sadistic, and a wonderful reprieve from games designed to pacify rather than rouse emotion. But the removal of a risque mini-game works against the title's nonconformist nature.