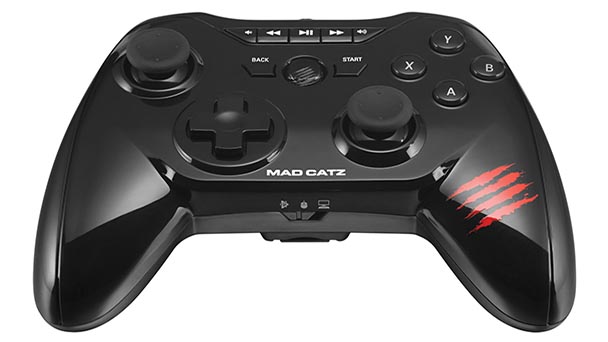 One of the fundamental failings in contemporary gaming is a lack of adaptability with peripherals. Too often, devices are designed to work only with a specific brand of machine- resulting in living rooms and offices filled with a multitude of functionally indistinguishable controllers. While this dissonance might be understandable in the console ecosystem, where third-party manufactures are bound by licensing agreements, in makes little sense in less restrictive contexts such as the Android, Windows, and iOS markets.

One example of a cross-platform control solution can be found in the Mad Catz C.T.R.L.R, an intriguing peripheral that aims to operate across all the aforementioned operating systems. While the unit’s jack-of-all-trade approach isn’t without flaw, the objective is noble. With a few firmware tweaks and a driver update, the C.T.R.L.R could become a serious controller contender for consummate gamers. 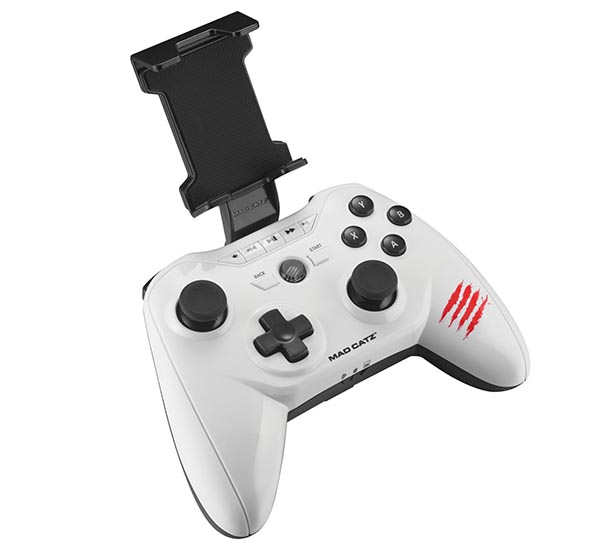 Opening the (mercifully, non-plastic clamshell) C.T.R.L.R’s packaging reveals the controller, a detachable travel clip, as well as a pair of AAA batteries that are required to power the peripheral.  Much like the MOGA Pro Power, the expandable fastener can grasp a phone that’s up to 80.5 mm/3.17 inches wide. In execution, inserting the substantially-sized Samsung Note 2 into the C.T.R.L.R’s spring-loaded claw was relatively effortless- although if the phablet was housed in a bulky OtterBox-style case, it would protrude just beyond the edge of the bottom bracket. That said, we inserted a variety of phones into the travel clip and not a single one broke free during vigorous shake sessions. For those who have no interest in having the C.T.R.L.R clutch their phone, the clip detaches, leaving little more than a plastic thumbscrew.

Bluetooth pairing the unit with a variety of Android devices was painless, with each tablet or phone making a quick and solid link with the controller. Diving into titles such as Dead Trigger 2 and Riptide GP 2 demonstrated the quality of the device, with only a small dead zone in the throw of each analog stick distinguishing the C.T.R.L.R from the type of experience exhibited by first-party console controllers. Obviously, the pad works best with games which allowed players to customize key bindings; Muffin Knight was operational but required players to use unconventional buttons to jump and fire. As most Android emulators allow for button customization, the C.T.R.L.R excelled in this capacity. For gamers who like to listen to their own playlists, the device has a row of media buttons at the top, which allow on-the-fly volume control or to change music tracks. 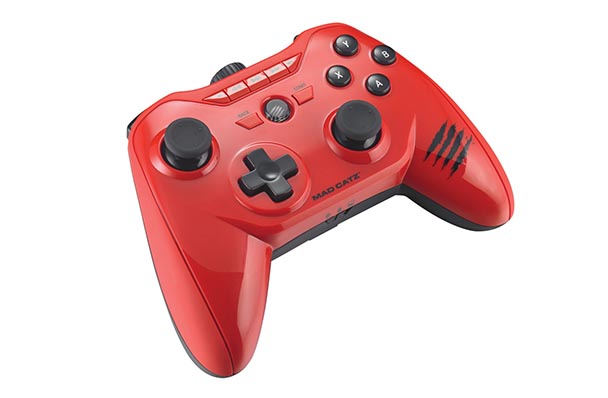 Moving a switch on the bottom on the controller, shifted the C.T.R.L.R into Mouse Mode, placing an arrow pointer onto the Android screen which could be moved with the left analog stick, with the controller’s other components simulating a scroll wheel as well as left and right clicks. Although substituting touchscreen input for a rather unwieldy point and click interface may seem like a folly, it does have one virtue: mouse-style control leaves no fingerprints on a freshly wiped game screen.

Pushing the slider into its rightmost position pushes the C.T.R.L.R into Computer Mode where the device can be used with a PC or Mac. While the peripheral was able to pair with all of our laptops and desktops, default button bindings in most Steam games were unorthodox. To remedy this problem, computer owners need to download Mad Catz’ accompanying drivers and software. While establishing a bond between controller and computer is as easy a linking the C.T.R.L.R to an Android device, players will have to unpair their existing connection for the peripheral to be recognized. Likely, this is an issue with Bluetooth handshaking, but it might become a bit of hassle for players who frequently switch between the two types of hardware. 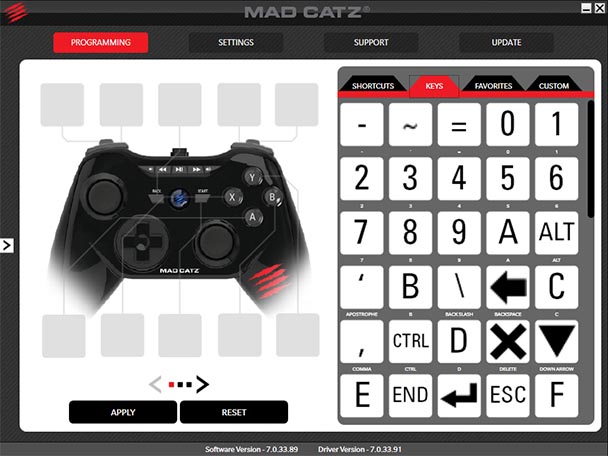 Once the software, nicknamed Range, has been installed, an icon in the Windows taskbar allows access to advanced functionality, allowing owners to assign key presses to each button on the C.T.R.L.R. Digging in, player will find a way to create their own multi-key macros or remap the ‘WASD’ keys to either the analog stick or direction pad, making Range rival the functionality of a paid app like Xpadder. That said, there’s still a few quirks to be ironed out, from the lack of any tutelage to the inability to save customized control layouts, but largely the software works without issue. Cleverly, futureproofing for the C.T.R.L.R can be found inside the battery compartment, where a micro-USB connector allows the peripheral’s firmware to be updated.

For some, the decision to use two AAA batteries over a rechargeable lithium-ion battery might create a minor commotion. But considering the C.T.R.L.R delivered over 36 hours of playtime (nearly supporting Mad Catz claims of a forty hour lifespan), this shouldn’t be too much of an issue. While range of the C.T.R.L.R was device dependent, the controller consistently maintained a pairing while being ten feet away from our Android hardware, while the span with PCs was closer to thirty feet. 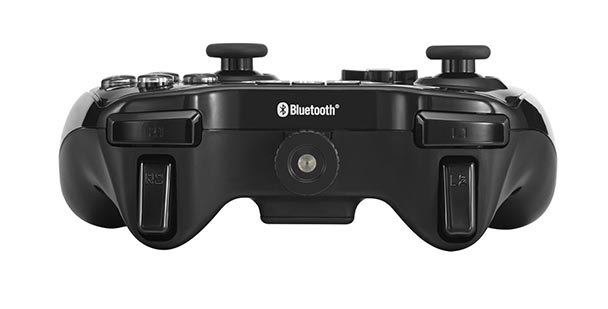 Save for the previously mentioned issues with the analog sticks having a dead zone, the build quality of the C.T.R.L.R is first-rate. Small touches like the raised dimples on the concave analog pads, the short but responsive throw of the controller’s quartet of face buttons, to the satisfying click the top triggers emit reveal that a great deal of focus testing when into the device’s final design. Ergonomically, the unit should appeal to players with an affinity for the Xbox 360 controller, as both size, shape, and function is very similar. The one remarkable difference with the C.T.R.L.R is the D-pad is more precise that the inferior directional pad on Microsoft’s device.

As one of the first controllers to bridge the gap between the Android, Windows, and Mac markets, the C.T.R.L.R is to be commended. Save for a few niggling issues, the peripheral is an accomplished performer in each ecosystem, warranting its current MSRP of fifty dollars. If Mad Catz can shoehorn in key rebinding for the Android OS and eliminate the dead zone for the analog sticks, then the C.T.R.L.R could easily reach near-requisite status. 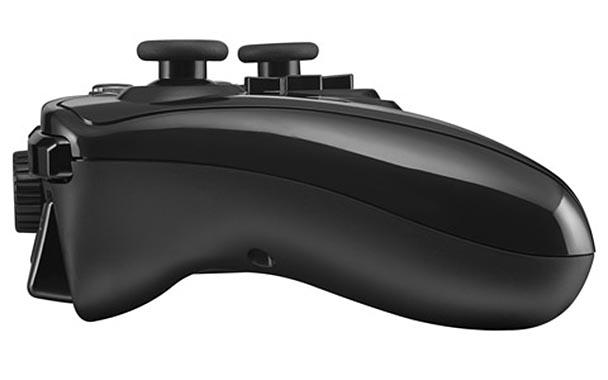 Mad Catz C.T.R.L.R Mobile Gamepad Review
One of the fundamental failings in contemporary gaming is a lack of adaptability with peripherals. Too often, devices are designed to work only with a specific brand of machine- resulting in living rooms and offices filled with a multitude of functionally indistinguishable controllers. While this dissonance might be understandable in the console ecosystem, where third-party manufactures are bound by licensing agreements, in makes little sense in less restrictive contexts such as the Android, Windows, and iOS markets. One example of a cross-platform control solution can be found in the Mad Catz C.T.R.L.R, an intriguing peripheral that aims to operate across&hellip;

Summary : Solid build quality and ambitious functionality make the Mad Catz C.T.R.L.R Mobile Gamepad a worthwhile investment for gamers who own a multitude of platforms.