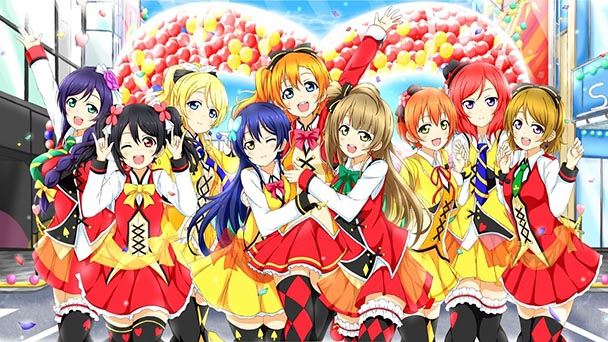 The expression of indefatigable determination is Love Live!’s dominant theme. Undoubtedly, the anime’s first two seasons drove this point home, as viewers watched the perpetually energetic Honoka Kōsaka rescue the Otonokizaka Academy from closure, as she corralled a group of eight classmates to form a pop idol group called μ’s. Overcoming a succession of needling obstacles, the girls preserved, motivating one another each time the specter of self-doubt appeared. Filled with adorable moments that encapsulated the joys of teenaged camaraderie and boundless potential, Love Live! might not have been the deepest anime, but it was a frothy collection of jubilant pop and effervescent energy that was difficult not to like, much like its amiable lead character.

Largely, the Blu-ray release of Love Live! The School Idol Movie replicates those refrains, extending a breezy, 102-minute romp that delivers another dose of pop idol pampering. The film opens with the young Honoka resolute on bounding over a puddle. She misses, of course, resulting in a comic pratfall as she tumbles backward into cold water. While Kotori and Umi attempt to comfort her, saying the leap is impossible, Honoka-chan personifies resolve, and therefore clears the obstacle with the grace of an Olympic long jumper. After 26 episodes and an OVA, it’s clear that impossibility isn’t a part of the Love Live!’s universe. 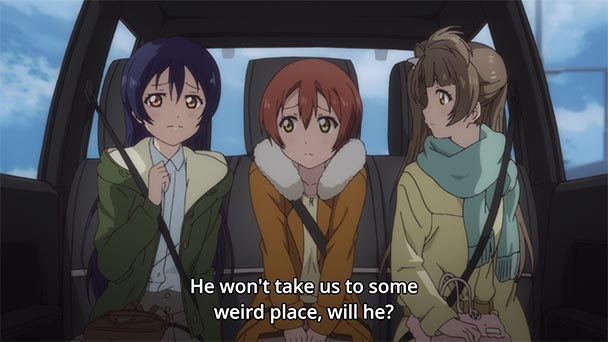 What is a part of Dengeki G, Lantis, and Sunrise’s multimedia collaboration is a need to keep the girls together, despite the latter half of the second season musing over the inevitability of graduation and departure. Here, fate intervenes with an invitation to another Love Live! competition- this one being held at the famed Tokyo Dome. But in order for the girl group to fill the ‘big egg’, they’ll have to garner enough publicity to ensure a sell-out crowd. Curiously, this takes the μ’s to New York City, forcing the group to put their plans to disband on hold, for, perhaps, one last time.

While a television spot on another continent seems like a roundabout way to stimulate ticket sales in Japan, it makes for a bit of comic relief and a gratifying change of venue. Likely Western viewers will wring amusement from the situation, with the some of the girls growing fearful when a taxicab is sent to a hotel in a sketchier part of the Big Apple. While the tension between tourism and practicing for the event is lackadaisical way to cultivate conflict, their time in NYC pays off promisingly with a prodigious Times-Square-based performance of “Angelic Angel”, the song from The School Idol Movie trailer. Clad in yukata and carrying hand fans, the song demonstrates the film skirting the robotic computer graphic-driven sequences that plagued the first season of Love Live! Here, the larger budget of a film allows for traditional animation, making it an easy highlight for the first act. 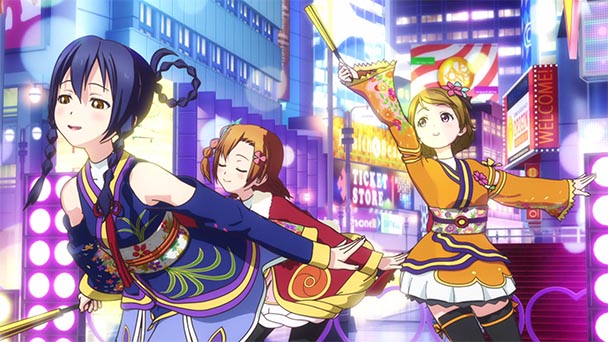 When the girls do return home, they find the ploy was hugely successful, propelling the μ’s to immediate stardom. They discover Akihabara is coated in promotional material, ironically mirroring the district’s actual appearance last December, when the film was released to home video in Japan. Unsurprisingly, Love Live!’s traditional conflict returns, this time with the μ’s attempting to grow from school idols into top-tier pop idols, prompting a bit of light introspection and comical banter.

Much like the “Music S.T.A.R.T!!” by μ’s OVA, The School Idol Movie flirts with fantasy, revisiting Honoka’s steadfast leap once more, but also having characters seemingly meet past and future versions of themselves. The device is never given a proper explanation, which could potentially alienate some viewers, put more importantly there’s no urgency in its use. Love Live! fans have been taught that success in inevitable given enough effort and ambition, seizing any sense of doubt from the script. Essentially, the anime and film succumb to sitcom structure, introducing and solving all problems during its running time. For some, the film’s focus on Honoka might also be an issue. If you’re a fan of Nico, Hanayo, Nozomi, Maki, Eli, Rin, Umi, or Kotori, don’t expect much screen time to reflect their perspective. 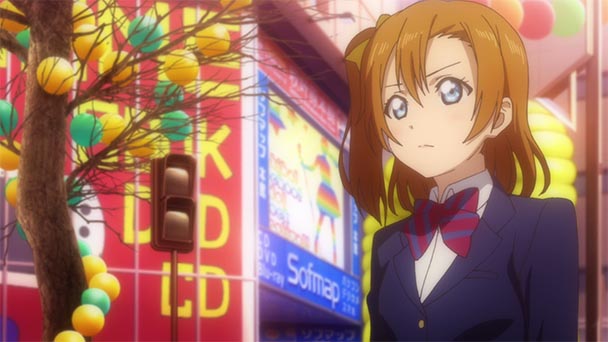 But asking for failure, disenchantment, or even a diversity of standpoints in Love Love! isn’t exactly the answer. The property thrives by offering Honoka’s perpetually hopeful trajectory toward success, avoiding the type of poignant issues that would be at home in ‘slice of life’ animation. Instead, viewers would be wise to let go of any weighty narrative based expectations and enjoy The School Idol Movie on its own lighthearted merits. And most off all, savor each of the film’s idol performances, each of which is teaming with unbridled charm and energy.

Save for the over usage of soft-focus, The School Idol Movie exhibits an uptick in quality over the original series. The animation is dependably fluid and in keeping with tradition, a number of locales are rendered in meticulous detail with Narita Airport, Central Park, and Akiba being notable standouts. Sonically, the film’s songs are irrefutably catchy, and easily as good as anything from the first two seasons. One surprising quirk is a change in music, with a piece exhibited in the original theatrical release changed for the Western Blu-ray iteration. Presumably the change stems from a copyright issue, but luckily doesn’t affect the tone of the film. 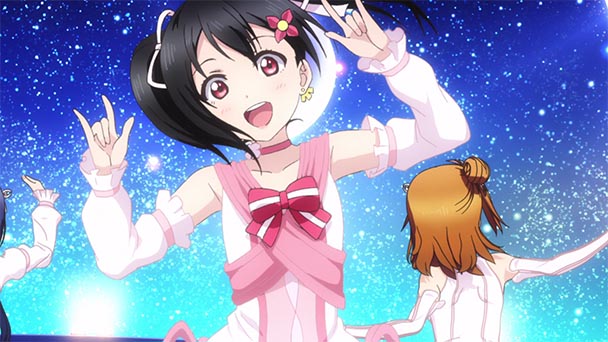 Those expecting Love Live! The School Idol Movie to be a radical departure from series theme might be slightly disappointed by the film’s ambitions. While the work does move the plot along and pave the way for Sunshine!!’s Aquors, this is wholly celebratory effort, offering an hour and half of festive fan-service and toe-tapping musical numbers. Loyal Love aficionados probably won’t mind too much, but as cinematic adaptations go, it would have been great to see both the writers and the girls take on a few more chances.