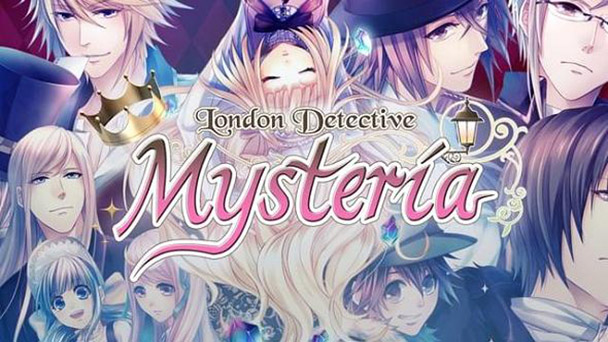 Set in late nineteenth century London, London Detective Mysteria commences with Emily Whiteley’s return to the city. After witnessing the death of her parents, young Lady Whiteley was whisked away to the countryside, missing some of the formality befitting of a fastidiously-groomed socialite. But now that she is of marrying age, Emily’s goaded into returning to city, making her debut at Queen Victoria’s posh birthday gala.

Lady Whiteley’s time away means she hardly the obedient maiden. Objecting to the appeals of her butler Pendelton, she objects to wearing an overly constricting corset to the grand event. Once in attendance, she sneaks away after overhearing a couple of young men seemingly involved in a serious matter. Her curiosities piqued, she hides behind the folds of drapery, eavesdropping on the pair who are conversing with the Queen. She discovers that a cat gifted by the Kingdom of Siam has absconded. As a symbol of goodwill between the two nations, the feline needs to be found before the issue causes embarrassment. 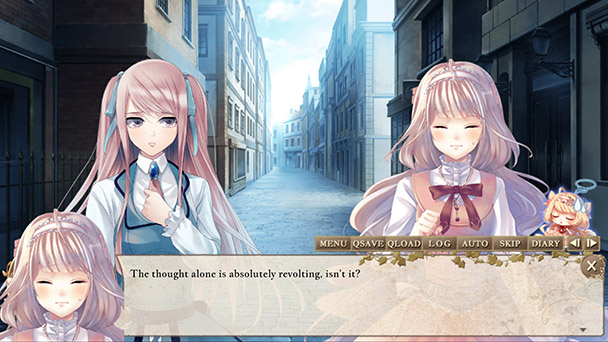 But Emily is no master spy and is quickly caught. The Queen, a friend of her mother, enlists the young woman’s assistance on the matter. With her pastoral upbringing, Emily understands animal behavior and is able to quickly return the cat. Delighted with her handling of the situation, Queen Victoria bestows a ring symbolizing that she’s an official detective of the Crown. She also receives a letter of recommendation to the Harrington Academy, a prestigious, and nearly exclusively male school for London’s up and coming detectives.

A Cast of Literary Progenies

Being an otome, it’s not surprising to find that the academy is filled with an array of youthful bachelors to romance. But what is remarkable is the makeup of the student body. Harrington’s attending by the offspring of literary notables, from Sherlock Holmes and Watson’s sons, the decedent of gentleman thief Arsène Lupin, Edogawa Ranpo’s Kogoro Akechi and Yoshio Kobayashi, and even Jack the Ripper Jr. 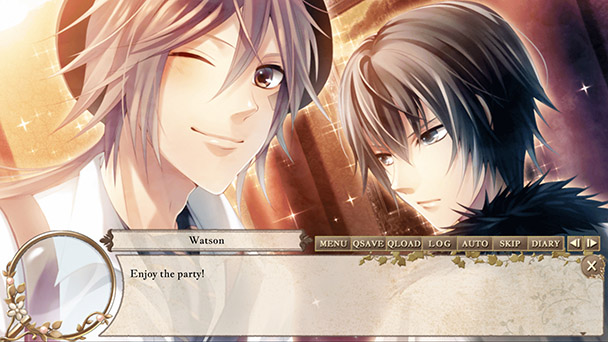 Initially, it’s slightly distracting to see characters with derivative names like Herlock Holmes. But, Mysteria falls back on surnames which helps with the plausibility. Eventually, you’ll absorb why the visual novel opts for the generational shift. Beyond transforming stuffy old characters into bishōnen with gorgeous manes, Mysteria tweaks the personalities of the archetypical cast. I really didn’t expect to fall head over heels for a catburglar with a dual identity, but I did. Even Sherlock’s aloof attitude began to ebb away once I got to know him.

But that’s not to say you’ll be able to fall for the entire cast right away. London Detective Mysteria gates off some of its routes on the first playthrough and while there was the potential for a yuri romance, the novel chose friendship instead. Pleasingly, you won’t have to sift through large passages of text multiple times. Retaining tradition, developer Karin Entertainment employs timed decisions in it’s branching storyline. But with the ability to fast-forward or rewind to the nearest choice selection as well as having forty save slots revisiting the plot isn’t too cumbersome. Unfortunately, there’s no auto-saving, so you’ll have to remember to record your own progress at regular intervals. 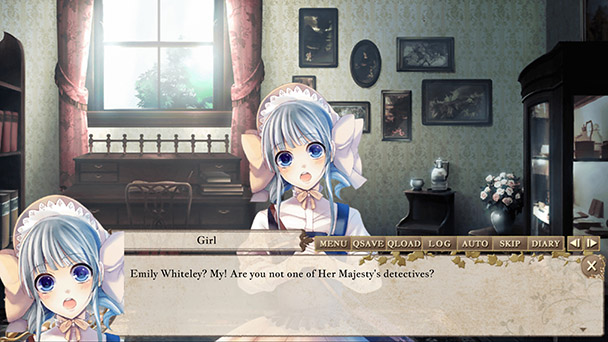 Mysteria’s interface is proficient, with an upward press of the Vita’s directional pad permitting readers to review and scroll through dialog and exposition. If it’s spoken, a button press recites the line, which is a welcome addition when you advance the plot with an accidental touch. Naturally, there are options to adjust the speed of text delivery and even automatically advance the story. There are even sliders to adjust the volume level of each main voice actor.

Not that’ll want to mute any of the seiyū. Although Emily, Sara, Jack, Kobayashi and Watson are voiced by different actors from the original PSP version of the novel but deliver a reading that’s every bit as capable. What’s especially appealing is the look of the game, which captures both the palatial grandeur of the era as well as danger of the Industrial-era capital. From the posh interiors of Buckingham Place to the gaslit, terra incognita alleyways on the East End, Mysteria captures London’s gamut. Delightfully, there’s just as much attention assigned to the character arts, with a multitude of clothing and emotions applied to each character. Sonically, the game’s score is solid enough to lament the lack of a music player component. 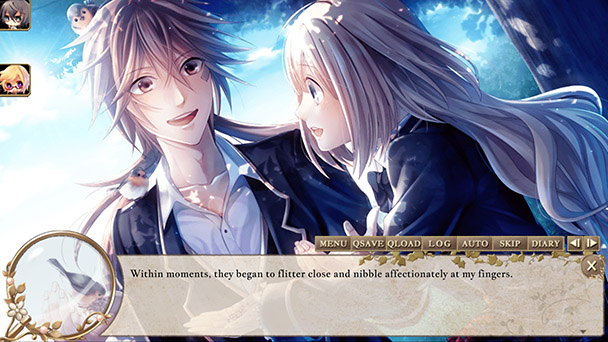 The Thrill of Romance

While the first nine chapters of London Detective Mysteria adopt a light-hearted tone, things become darker across the remining quintet of chapters. Thankfully, this doesn’t feel dissonant, with the latter leaving little time for reflection when your solving mysteries, chasing suspects, acquiring backstory, and possibly- growing close to one of the game’s lucky leads. Unsurprisingly, not all of the love stories are equally engaging, but a few like Lupin’s branch, will undoubtedly delight fans of the genre.

But if Mysteria’s storytelling does have a fault, it’s rooted in the novels tendency to put Emily in precarious situations. While she’s able to solve these problems some of the time, all too often it’s the title’s other characters who come to here aid, making her a damsel in distress with peeving regularity. Occasionally, this also extends to her investigative assignments. Although she’s given an in-game diary, the tool is barely needed for the game’s sleuthing. Ideally, the title would title would make Emily work more instead of depicting her reaching solutions on her own. 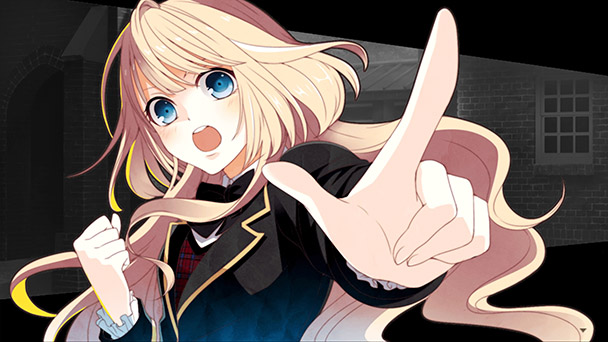 But credit needs to be given to the localization as well as the game’s handling of more contentious issues.  The adaptation into English is prodigious, with Mysteria habitually capturing the haughty vernacular of the context. Given the presence of foreign characters in a Victorian context, it’s gratifying to see that the writers didn’t sugarcoat the cross-cultural elements with Akechi and Kobayashi.

Given the rising popularity of otome in the West, it’s gratifying to see a publisher like XSEED push the medium. But what’s even more inspirational is the quality of London Detective Mysteria. While plenty of intrigue, a noteworthy cast of characters, and a host of exceptional art, visual novel fans should consider spending some of their free time with Emily Whiteley and some of Victorian London’s most charming bachelors. Even if you’ve played the original PSP version, the inclusion of epilogues warrants a trip back to London.

London Detective Mysteria was played on PC with review code provided by the publisher.

London Detective Mysteria (PC) review
A Lady&rsquo;s Return Set in late nineteenth century London,&nbsp;London Detective Mysteria&nbsp;commences with Emily Whiteley&rsquo;s return to the city. After witnessing the death of her parents, young Lady Whiteley was whisked away to the countryside, missing some of the formality befitting of a fastidiously-groomed socialite. But now that she is of marrying age, Emily&rsquo;s goaded into returning to city, making her debut at Queen Victoria&rsquo;s posh birthday gala. Lady Whiteley&rsquo;s time away means she hardly the obedient maiden. Objecting to the appeals of her butler Pendelton, she objects to wearing an overly constricting corset to the grand event. Once in attendance,&hellip;

Summary : While some might yearn for a bit more interactivity when it comes to sleuthing, otherwise London Detective Mysteria can absorb visual novel fans for dozens of hours.