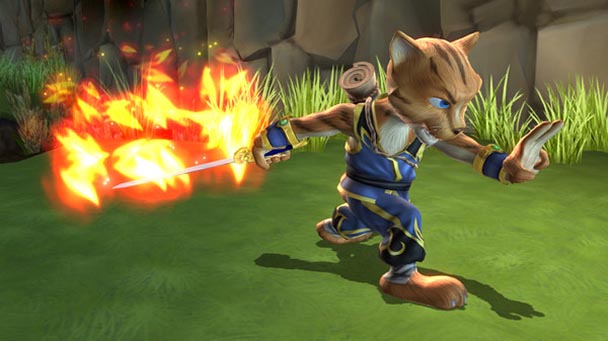 Gaming in the 1990’s was dominated by character mascots, where protagonists like Sonic the Hedgehog, Crash Bandicoot, Earthworm Jim and Gex encouraged sales with a marketable combination of agility and bad-boy attitude. But when the Xbox 360 was released in 2005, tastes had decidedly changed. Essentially, the bubble burst for anthropomorphic action stars, their roles overtaken by more life-like protagonists who harnessed the power of new hardware. Goodbye Spyro, hello Shepard.

This context might help to explain why Legend of Kay didn’t resonate with gamers when it was released on the PlayStation 2 in 2005. With a Wushu-proficient, impetuous cat as its lead, Legend felt like a throwback to the previous console era. But now, the popularity and prosperity of remasters have fueled the return of the feline, bringing Kay to the PlayStation 4, Wii U, and PC. While the update is visually adept, the title’s delivery hasn’t aged nearly as well. As such, Kay seems more in need of a comprehensive reboot than a high-definition remake. 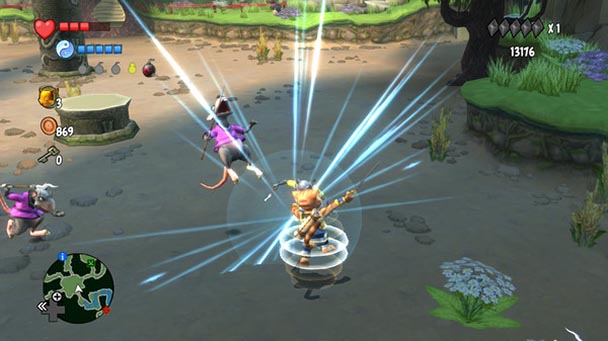 Much of the stagnancy stems from the game’s storytelling. Legend of Kay’s premise of harmony disrupted by the threat of colonization is respectable, with gorilla and rats standing in for Hong Kong-cinema’s humanoid villains. In execution, the game’s comic book-style cutscenes endure for far too long, extending wide swaths of exposition, and requiring players to tick an option in the settings menu to skip these sequences. Even worse is the game’s dialog and voice acting. Blending an Eastern backdrop with English-speaking characters can be inspiring as Avatar: The Last Airbender and Kung Fu Panda have demonstrated.

However, Kay’s attempt at multiculturalism is misguided, with tropey Jamaican frogs and scheming, Engrish-speaking rats that aren’t far removed from awkward characters Jar Jar Binks or Watto the Slave trader. Subtle racism aside, Legend’s most glaring error in the demeanor of its main character. Shifting between childish wonder and mild cursing (rats are called “damned bastard buttbrains”), Kay’s character makes for an awkward fit in an otherwise inoculant, all-ages realm. Alas, enemies aren’t any better, calling him “pussy boy” at one point in the game. 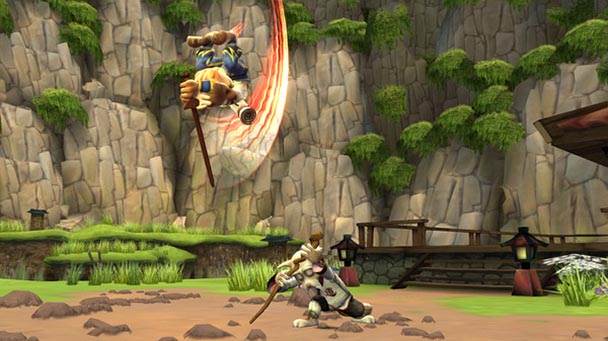 But Kay’s biggest transgression is being unlikable. Impulsive leads aren’t uncommon in these contexts, but Kay’s disrespect toward his elders creates narrative dissonance. We’ve supposed to identify with the reckless cat, but his steady output of put-downs, persistent laziness, and whiny voice acting sure make it a struggle. Eventually, the character comes gains a bit of maturity, but by the time that happens, impressions may have already been formed.

Fortunately, Legend of Kay’s mechanics aren’t as moldy as its narrative. Beyond a button-initiated slash used to damage ordinary enemies, the kitty’s also got a mean uppercut, magic abilities, a throw, spin attack, and a mean downward slash that can be executed during a jump. The game’s signature ability is a combo mode, and after defeating a Zhong (a floating cylinder), removing armor from an enemy, or vanquishing a villain, will enhance Kay’s capabilities. Once in this mode, a button press and stick pull send the hero catapulting toward his next target, extending the possibility of twenty-hit string of strikes that can even send Kay airborne. 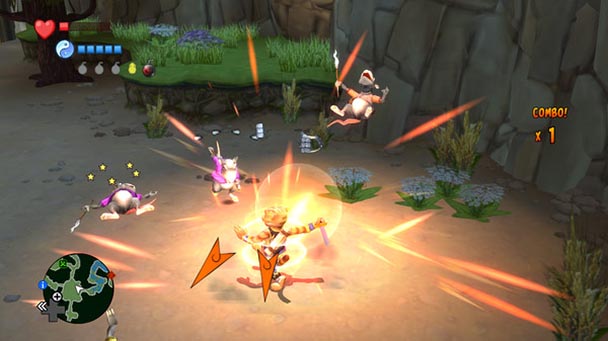 Largely, battling the game’s collection of baddies and bosses can be enjoyable, with Legend of Kay bestowing new weapons, armor, and artifacts upon the completion of compulsory and optional quests. But during the fifteen-hour span it takes to complete the campaign, a few past-gen troubles will erupt. One of the biggest hindrances is the game’s camera. While players do have a limited amount of control over tilt, when Kay’s back it so a wall, your viewpoint can spin wildly. Another issue is that the game doesn’t always like to exhibit the best perspective on the action. When you asked to follow you master up to a cave excavated from the top of a hillside, the game fails to suggest the location of the hollow, which can cause disorientation. Regretfully, this isn’t an isolated incident, with uncertainty occurring with regularity.

Another issue are the game’s animal riding sequences, which put Kay astride a galloping boar, wolf, and on top of soaring dragon. Woefully, stiff steering (pro tip: use the shoulder buttons to ‘drift’) and wonky collision detection can weaken these events, forcing a restart if players come into close proximity of the environment.  But outside of these runs, Kay demonstrations that cats do have nine lives, surviving dangers that would kill lesser characters. As such, it’s refreshing to shake off high falls and plunges into water, with the latter using only inducing a frustrated shake as the protagonist tries to dry his fur. 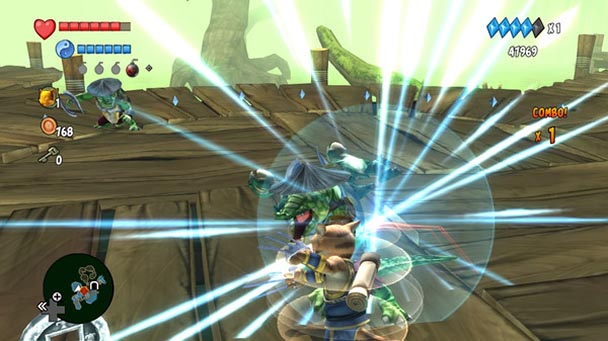 When Legend of Kay was originally released during the dawn of the PS2’s lifecycle, the game’s visuals proved competent offering a nice variety of picturesque backgrounds and interesting enemies. For Anniversary, Kaiko working with Neon Studios original code has done a dexterous job bringing the title up to date, adding diminutive touches like reflections on floors. Characters appear to have been rendered with an increased amount of polygons and texture work has been given a fastidious upgrade- bringing newfound fidelity to the cast and locales. While the soundtrack isn’t Jake Kaufman’s magnum opus, it complements the action nicely, as has been given a Surround Sound makeover. While the game runs smoothly on mid to high-end rigs, PC purists might bemoan the lack of graphical options, with Anniversary defaulting to a resolution that matches your current desktop setting.

Legend of Kay Anniversary is a technological feat, offering one of the best remasters of a PS2-era title to date. Remarkably, the gameplay remains engaging, despite a sporadically obstinate camera. But it’s Kay’s story that reveals the game’s decade-old age, forcing gamers to listen to sub-par voice work and dialog that’s unintentionally amusing. If players can get past that hindrance, than there’s little reason not to take this kitty home. 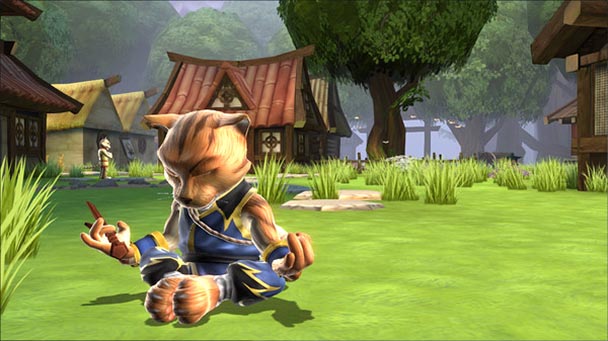 Legend of Kay Anniversary was played on PC with review code provided by the publisher.

Legend of Kay Anniversary
Platform: PC, PlayStation 4, Wii U
Developer: Kaiko, NEON Studios
Publisher: Nordic Games
Release date: July 27th, 2015
Price: Currently $17.99 via Steam, regularly priced $19.99, PSN, eShop, and retail
Legend of Kay Anniversary review
Gaming in the 1990&rsquo;s was dominated by character mascots, where protagonists like Sonic the Hedgehog, Crash Bandicoot, Earthworm Jim and Gex encouraged sales with a marketable combination of agility and bad-boy attitude. But when the Xbox 360 was released in 2005, tastes had decidedly changed. Essentially, the bubble burst for anthropomorphic action stars, their roles overtaken by more life-like protagonists who harnessed the power of new hardware. Goodbye Spyro, hello Shepard. This context might help to explain why Legend of Kay didn&rsquo;t resonate with gamers when it was released on the PlayStation 2 in 2005. With a Wushu-proficient, impetuous cat&hellip;

Summary : Legend of Kay Anniversary’s looks great and plays decently. But the game’s dialog feels stuck in the year that YouTube launched.