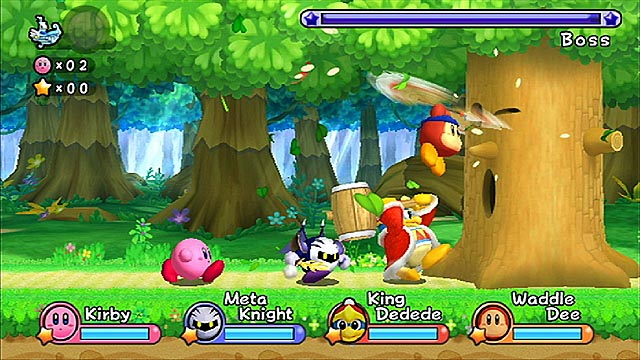 For many players, the 16-bit era is fondly remembered as gaming’s golden age. Before polygonal protagonists required camera control to glean a serviceable viewing perspective, sprite and tile-based visuals exhibited a static viewpoint, allowing gamers to immerse themselves in the action. With most Genesis and SNES titles set on a 2D plane, control schemes were intuitive; almost anyone could pick up a controller and intuitively guide Mario, Sonic, Ristar, and Vectorman to their respective destinations.

As both Donkey Kong County Returns and Kirby’s Epic Yarn have demonstrated, Nintendo is one of the few contemporary publishers who comprehends the allure of a fastidiously polished, vibrantly rendered two dimensional platformer. Recent release Kirby’s Return to Dream Land continues that trend, delivering a devastatingly charming romp which evokes the virtue of a classic side-scroller, while adding a syrupy coat of contemporary graphical gloss. 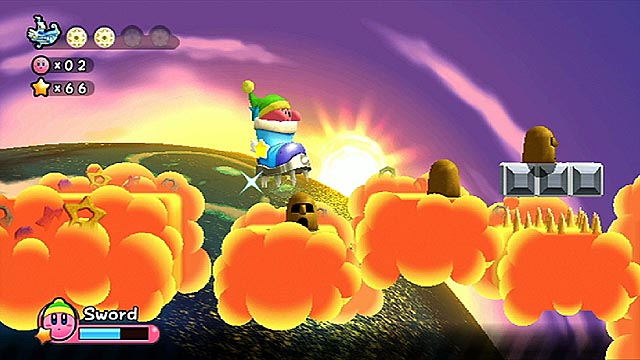 Abandoning the unconventional control methods used by Kirby’s Canvas Course, Kirby Mass Attack and even Kirby’s Epic Yarn, Return to Dream Land restores the pink protagonist’s transformational and flying capabilities. Taking a cue from classic Kirby games, players may inhale adjacent enemies, stealing their offensive abilities in the process. Beyond the archetypical (and satisfying) flame, spike, and sword powers, a number of new aptitudes are unveiled. One of the most pleasing is Kirby’s leaf abilities, which tosses a fierce flurry of foliage at opponents. Recalling the Smash Bros. series, strikes are contextually-based, with different attacks if players are standing, jumping, or dashing. Rounding out the player’s arsenal is the sporadic Super Ability, which are bestowed once Kirby devours a glowing foe. Here, the player is given access to devastating onslaughts, capable of wiping out swaths of opponents as well as sections of the environment. Just try not to smile when the affable rose-colored character pulls out an enormous meat cleaver that’s nearly as big as the screen.

While Return to Dream Land offers a capable single-player experience, the title’s mood changes radically when Kirby receives assistance from up to three additional local participants. Wisely, developer HAL Laboratory didn’t attempt to replicate the inflammatory, character-bounding antics of New Super Mario Bros. Wii. Instead, the seamless drop-in/drop-out multiplayer functionality allows additional gamers to control recurrent Kirby personalities King Dedede, Meta Knight, Waddle Dee, as well as alternatively-colored Kirbys. Each specific character has their own specialty- from long spears ideal for activating distant switches to a sword blade capable of slicing rope. Cleverly, co-characters can’t clear all the obstacles, forcing Kirby to the forefront. With a limited number of lives for the main hero, teams must continually shift from safeguarding Kirby to allowing Mr. Pink to clear the road ahead, endowing the game with a satisfying collaborative vibe. 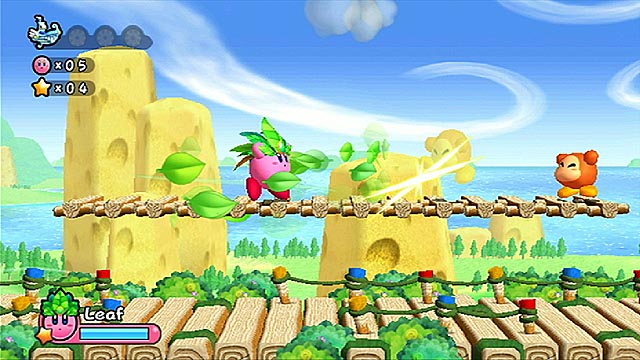 Although some players might impulsively fault Return to Dream Land for its relaxed level of difficulty, they would be overlooking the title’s subtle challenges offered to more experienced players. From collecting 120 increasingly elusive energy spheres spread out across the title’s six worlds, an additional difficultly level once the game is completed, to a particularly formidable multi-staged final boss battle, Kirby proves he’s not an absolute pushover. Likely, open-minded players will be having so much fun with the title’s satisfying ability-copying abilities and inventive level design that they won’t miss seeing a ‘Game Over’ screen at regular intervals.

At least some of the Return to Dream Land’s irrefutable magnetism steps from the game’s visual which transcend the Wii’s conventional aesthetics.  Characters and enemies move with an assortment of emotive animations, while environments brim with perpetually cheer. Small touches like the heat distortion of a fireball or Kirby’s use of diminutive ice skates when dashing with ice powers will surely warm the hearts of graphical purists. Sonically, the title’s new songs are perfectly integrated with classical Kirby refrains, reiterating the game’s huggable ambiance. 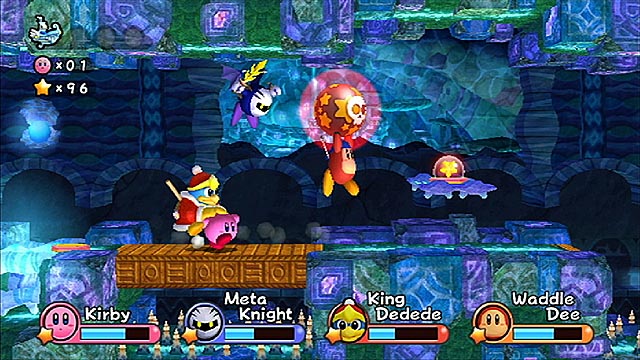 Beyond the output of WayForward Technologies, Kirby’s Return to Dream Land is the type of title that the industry makes with woeful infrequency. As a magnificently immersive, visually beguiling game capable to appealing to a wide audience, the game in a reminder of why Nintendo’s name is synonymous with gaming. Return to Dream Land is a smile-inducing, whimsy-filled escapade which rewards players at almost every opportunity, earning its place in the Nintendo pantheon.

2011-11-02
Robert Allen
Previous: Podcast 8-8: Tube Sock Receptacle Gaming
Next: The Lord of the Rings: War in the North Review