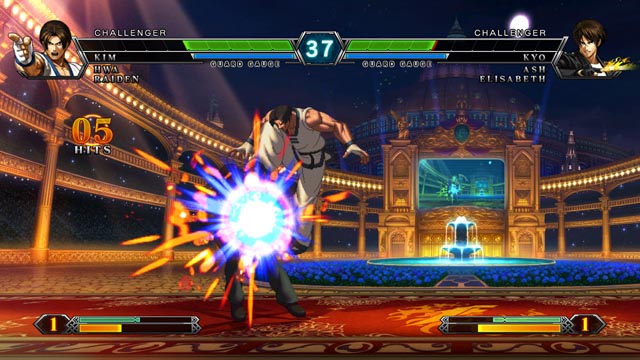 Throughout the franchise’s seventeen year legacy, King of Fighters has struggled to live up to its majestic moniker. Once a celebrated synthesis of characters from SNK’s Art of Fighting and Fatal Fury games, 2009’s half-hearted King of Fighters XII suggested the series had slipped to second-rate Street Fighter status. Hampered by prolonged load times, inferior netcode, and the inexplicable absence of fan favorite Mai Shiranui, the development team at SNK Playmore needed to execute a real-world desperation move if the franchise was to remain relevant.

Mercifully, the recent Xbox 360 and PlayStation 3 release of King of Fighters XIII rectifies many of the previous title’s flaws, while exhibiting a striking visual makeover, a handful of new play modes and the incorporation of new game mechanics. Beyond bit of lag which persisted through (pre-release) online matches, KOF XIII has enough aptitude to warrant a purchase from any fighting game aficionado. 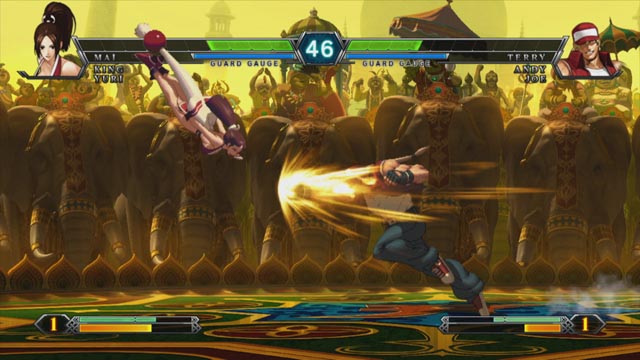 Following the precedent established by King of Fighters ’95, the thirteenth iteration in the series allows players to select a three-person team of pugilists. Unlike some contemporary fighters, gamers don’t swap characters in and out of the bout at will. Instead, combatants stay in a match until they are KO’ed, and are subsequently replaced by the next competitor on the roster. King of Fighters may lack the hyperactive spectacle of assists and duo team attacks, but fighting purists wouldn’t have it any other way. As such, the speed of each match is deliberate and calculated, allowing participants to bask in the more cerebral elements of a brawl. The franchise’s customary four button combat system also complements the tempo, as memorizing the special attacks from a revolving trio of fighters could have been problematic at a breakneck pace.

For better or worse, King of Fighters XIII’s fisticuffs are principally ground based, shirking the outrageous aerial conflicts of its competitors. Yet, that doesn’t mean the game lacks flourish. Beyond dispensing with the dynamically zooming camera, the game eliminates the Guard Attack, Critical Counter, and Clash systems of its predecessor. Now, EX Mode swaps a bar or two from a player’s Power Stock in exchange for formidable EX Specials or devastating EX Desperation moves.  The title’s superlative assault is named the NEO MAX, and despite evaporating both of a player’s gauges, delivers an attack brutal enough to upend the momentum of most matches. Additional nuances from the potential to increase combos through the Drive Cancel, avoid projectile with the Evasive Roll, or even bolster their canceling ability with the Hyperdrive Mode endow KOF XIII with a satisfying quantity of techniques to be mastered. 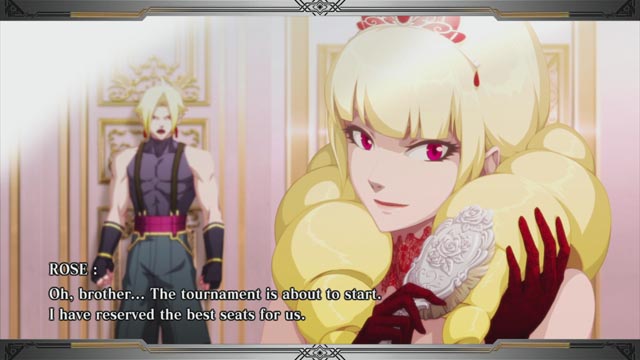 Fortunately, the title’s depth is also augmented by its collection of modes- from the loquacious but typically entertaining character chronicles in story mode to the handicapping and one-on-one bout options found in versus mode. While King of Fighters XIII’s online component offer friendly skirmishes in player matches and heated competition in ranked contests, a consistent amount of sluggishness mired online games. Hopefully, this wrinkle will be ironed out with a forthcoming patch. As it stands, players will have to adjust their play speed to compensate for the change in responsive.

Cunningly, KOFXIII’s graphical delivery is almost sumptuous enough to detract from any weaknesses with the netcode. Shunning a polygonal rendering of characters, the title’s sprite-based characters are rich with detail, whether through the contorted stance of drunken fist master Chin Gentai or the hypnotic jiggle of Mai’s bosom. The level of detail is ubiquitous through King of Fighters XIII, flaunted in everything from the game’s striking menus to each stage’s amusingly animated backdrops, which gradually change throughout a match. In an era when manuals offer little more than a controller map, Atlus’ 85-page, (albeit, bilingual) full-color tome is a triumph. With chibi characters communicating to the reader, opulent background art, and a move sheet for each character, the publishers recognize that there’s more to a game experience that just well executed code. Likewise, the game’s four CD soundtrack offers over a hundred song from the franchise’s extended history. Hardcore fans will likely be beguiled by the compendium of jazzy piano melodies and wailing guitar riff which is a catalyst for arcade memories. 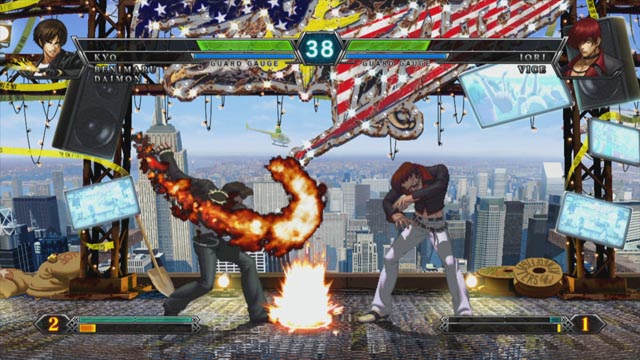 Players who’ve snubbed the series for the fracases found in BlazBlue, Super Street Fighter, and Tatsunoko vs. Capcom: Ultimate All-Stars take note: King of Fighters XIII merits a position in the upper echelon of fighting games. With cavernous depth, fastidious polish, and delightful amenities, the title reveals itself to be a daunting challenger in this often cutthroat genre.