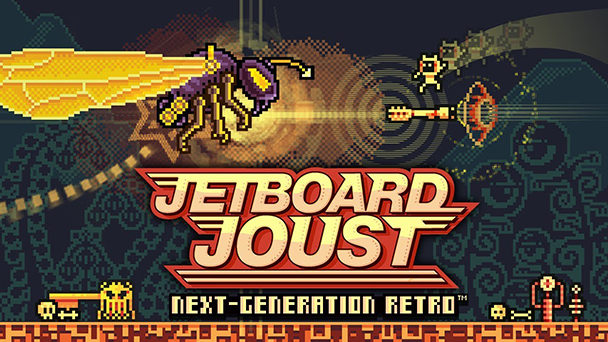 While the concept of a bidirectionally-scrolling shooter with roguelike qualities might sound like a hit, Jetboard Joust is thoroughly enjoyable jaunt. There’s an abundance of different enemy types and enough weapons to ensure longevity, too. 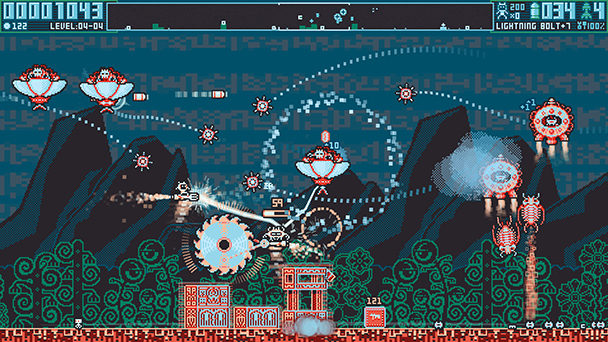 Don’t make the mistake of assuming Jetboard Joust is spiritual successor to 1982 arcade smash, Joust. No, it’s a refence to Skateboard Joust, a rather obscure 1988 ZX Spectrum title. Having never played the Williams Electronics’ classic coin-op, programmer James Closs didn’t attempt to recreate the showdown between knights who ride atop of flying ostriches. Instead, he offered a surreal affair where a lone skater took on waves of flying Daleks.

Fortunately, Closs (who now codes under the nom de plume of BitBull) did play a lot of Williams’ Defender. Boot up his latest release, Jetboard Joust and you’ll find a captivating spiritual successor that take the basics of the humanoid-protecting shooter while adding a layer of modern nuance. 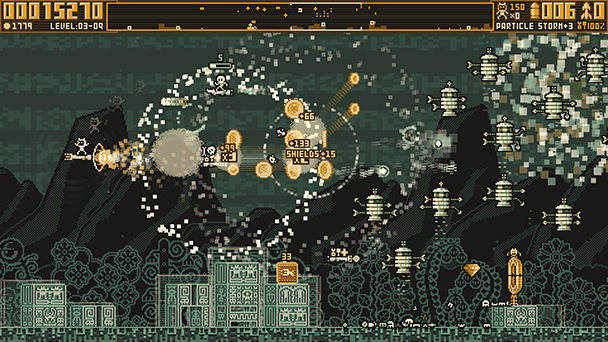 As the moniker implies, your character rides on a massive jet board, which flies across the each bi-directionally scrolling stage much like the ship in Defender. You’ll face a similar objective as spawning enemies are kidnapping humans and dragging them skyward. If they get enough elevation, a monstrous transformation occurs and they’ll grow in ferocity and resistance.

Smartly, a mini-map at the top of the screen helps keep track of any abductions, and there are even on-screen indicators that indicate the direction of a capture in progress. There’s no worry about rescuing falling humans like Defender. But Jetboard has a navigational feat of its own, as you try to pick up power-ups from fallen enemies before they disappear from bottom of the screen. 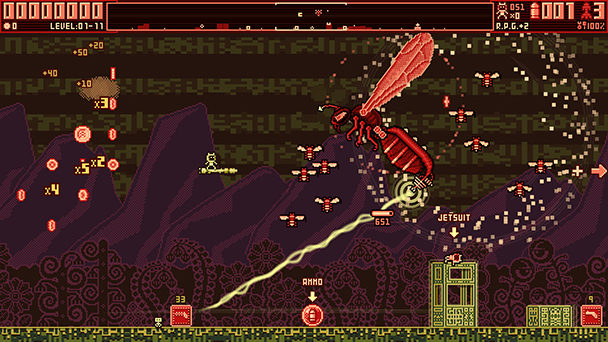 Graciously, a shielding meter replaces the one-hit death deaths, and it’s even possible to restore the integrity of your jetboard by picking up power-ups. There are no smart bombs, but offensive assault is found in a dash that can obliterate several enemies in front of you. At the end of a stage, you’ll face off against a multitude of elevated foes or a boss. The reward for making it past this challenge is a key that opens a passageway. Venture inside and you’ll discover currency as well as new weapons.

Although you might feel that a time-honored game like Defender doesn’t need rogue-like elements, they integrate surprisingly well here. For one, they extend each run past the typical pithy playtimes, offering the possibility of continuing in exchange for collected cash. You’ll also pickup new weapons. While these have restrained supplies of ammunition, they’re always more powerful than your basic cannon. Like Outrun, the game’s campaign has branching paths, adding variety across multiple playthroughs. 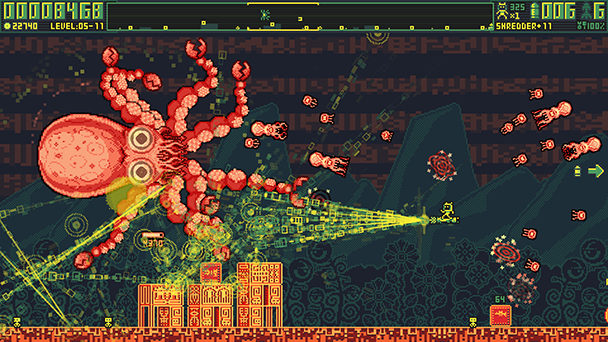 Jousting with a Constrained Palette

While detail displayed by the game’s bosses and particle effects exceed the ZX Spectrum capacities, Jetboard Joust attempts to honor the early era of computer games. In execution, that means stages have a limited amount of color, which can make the identification of things whizzing by, a bit challenging at first. But eventually, you’ll grow accustomed to the restrained color palette, soaring above the game’s city scrapes as you decimate the invading menace.

Jetboard Joust making a winning showing on Switch, with the frantic, bi-directionally, horizontally scrolling shooter making a flawless showing on Switch. Not only in the port perfect, with 60fps output, but an astoundingly entertaining title poised to please shooter fans.

Jetboard Joust was played on Switch with
review code provided by the publisher.

Jetboard Joust review
While the concept of a bidirectionally-scrolling shooter with roguelike qualities might sound like a hit, Jetboard Joust is thoroughly enjoyable jaunt. There&rsquo;s an abundance of different enemy types and enough weapons to ensure longevity, too. Don&rsquo;t make the mistake of assuming&nbsp;Jetboard Joust&nbsp;is spiritual successor to 1982 arcade smash,&nbsp;Joust. No, it&rsquo;s a refence to&nbsp;Skateboard Joust,&nbsp;a rather obscure 1988 ZX Spectrum title. Having never played the Williams Electronics&rsquo; classic coin-op,&hellip;

Summary : In case you missed the PC version, the Switch port of Jetboard Joust brings all the feverish shooting action and roguelike traits.