Is MiniStick the Cure for WASD Phobics? 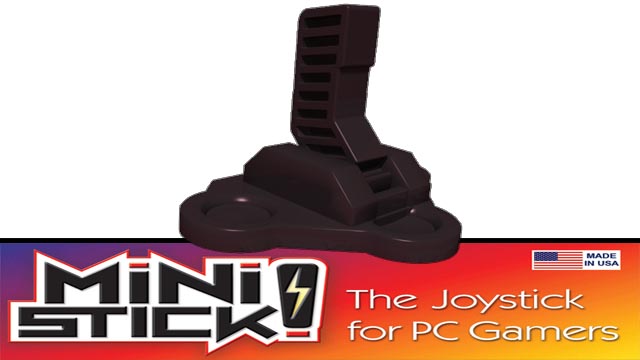 PC gamers often espouse the advantages of a mouse and keyboard control method. Yet, for players accustomed to the ergonomics of a console controller, using a piece of equipment intended for crafting memoranda can create an unwieldy experience capable of negating any possible benefits.  For those daunted from directing characters around with either cursor controls or the WASD keys, a possible solution may exist in the MiniStick. Convinced and crafted by St. Louis-based Great American Ideas, the ersatz joystick latches onto keyboards via small three hook and loop fasteners. Using a single lever to issue y-axis commands (while teetering across the x-axis), the contraption purports to offer a more instinctual input method, even boasting that the device improved the scores of average gamers by more than 50% during “independent tests”. Naturally, we put the MiniStick’s claim through our own set of trials in an attempt to duplicate these contentions.

Before amassing four gamers of varying skill levels, we scoured our Steam account for two games which would offer divergent experiences, while still entailing a high level of keyboard input. Seeking to eliminate the variability introduced by multiplayer titles, we settled on two different single player games:  the 2D, Defender-esque, Astro Tripper, a game which utilizes only keyboard input. Xotic, a mouse and key-based, first person shooter which is geared toward score runs, was our second game, as it uses a traditional mouse and keyboard input method.

When the group of players were first introduced to the MiniStick, skepticism ran rampant, especially in the higher experience levels. “That’s it? Just two little pieces of plastic?”, scoffed the veteran PC gamer, while another player was uncertain if the Velcro-like bonds wouldn’t loosen during intense play. Regretfully, Great American Ideas only included three adhesive hook and loop attachments, which began to lose their stickiness as they were shifted between the WASD and cursor keys, solidifying a participant’s concern. Hopefully, the company will include additional fasters, so purchasers don’t have to make any impromptu trips to the nearest Wal-Mart. Another solution would be to use AutoHotkey, a free, script-based program which allows users to redefine keys.

To compensate for any performance increase incurred by repetition, each participant played one game of Astro Tripper using only the keyboard, followed by two games with the MiniStick/Keyboard combo (using keys  to fire, change direction, and cycle through weapons) , and then one round with just the keyboard. Midway through the trial, suspicion for the stick started to wane, with the two casual players earning notably higher scores when using the device. Once the other pair of experienced players finished their games, we tallied up the overall difference in score. Unsurprisingly, the participants with the least amount of PC gaming achieved the greatest improvement in score. One unexpected incident did occur: the player with the most proficiency exhibited a worsened performance when using the mechanism. Overall, the group incurred a 22% increase in score, failing to match the MiniStick’s advertised claims. 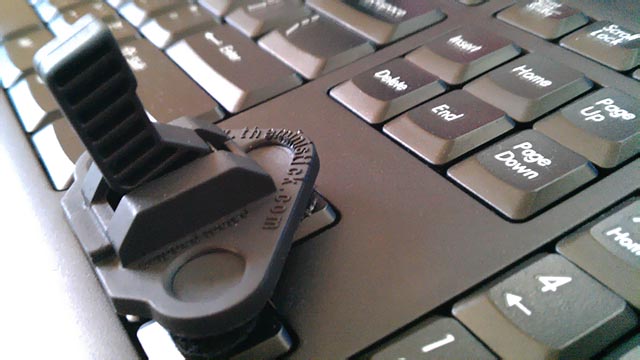 Moving onto Xotic, the results were similar- with scores using the stick inversely correlated to experience level. Again, the most adept participant scored lower when using the device, although this might be attributed to the gamer’s style of play; his passionate flicks and tugs unhinged the MiniStick on several occasions. Additionally, two participants experienced a snag when the gadget was attacked to the WASD keys; despite careful placement, neighboring keys would sporadically receive an accidental press. Here, the group experienced a 34% increase in score; when assessing both Astro Tripper and Xotic, the average increase was 28%, albeit coming close to the 50% mark for casual gamers.

When the participants were asked how much they’d pay for the MiniStick, three players agreed that between five and ten dollars was a fair price for the device, while the other member fervently expressed disinterest at any cost. The trio willing to purchase the MiniStick thought that the devices fasteners felt a bit too loose, with one commenting on how during play, the device’s constant hinging/unhinging “sounded like a hamster gnawing on a wood stick”. 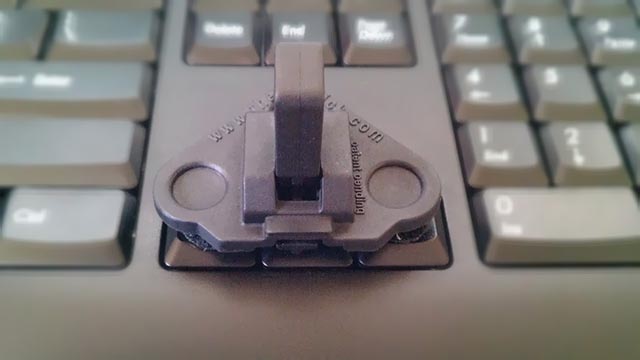 Although we were unable to duplicate Great American Idea’s performance claims, it’s evident that the MiniStick is capable of augmenting an apprentice player’s play levels. Assuming that the stick is offered for a reasonable price, the mechanism offers a makeshift remedy for gamers who suffer from WASD-phobia. Those seeking a premium solution to keyboard-free character control might consider the Razer Hydra.