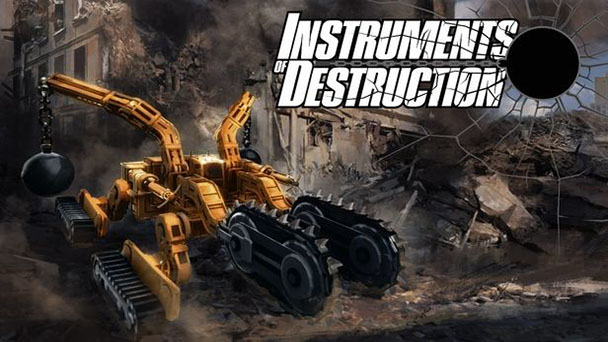 Long for the days when a LEGO vehicles are plunged through a house of cards? Instruments of Destruction gives you the beaches and the hardware to make mayhem happen.

Luke Schneider has an appetite for destruction. As a senior designer for Volition, he helped craft one of the best outlets for digital vandalism with Red Faction: Guerrilla. Playing as a freedom fighter, the 2009 title provided a playground filled with towering structures that could be convincingly toppled over with a few well-placed explosives.

Branching out on his own, Schneider formed Radiangames, which released a number of underrated twin-stick shooters such as Super Crossfighter, Devastator, and Inferno 2. While these were smaller, two-dimensional titles, each demonstrated a fixation on explosions, flooding screens with striking particle effects. 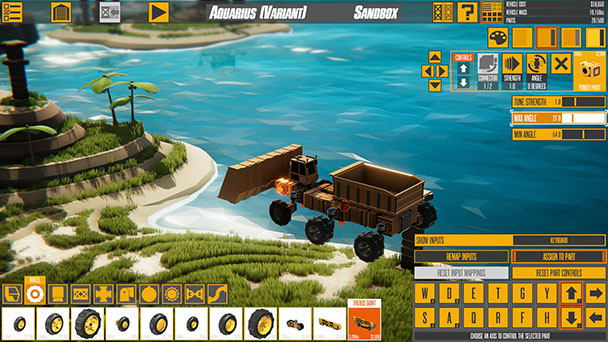 With Instruments of Destruction, Schneider returns to the third-dimension, explores the ying-yang relationship between construction and destruction. The former is found in the games ‘Build’ component, which provides an opportunity to construct your own vehicle. Much like games like Besiege, the assembly process uses dozens of different modular parts. There are principal structural pierces, connectors, and wheels to propel your vehicle or even make it fly, and it can feel like a digital LEGO set. Of course, there are plenty of mayhem-making parts as well, with wrecking balls, massive spikes, scoops, circular saws, cannons, and a bomb launcher all assisting with your demolition duties.

Although Destruction doesn’t provide a full-blown interactive tutorial for building, it’s an easy skill to learn. For immediate satisfaction, Sandbox Mode lets you take one of the game’s 54 premade vehicles, and strap on a few weapons before turning you loose. Alternatively, the campaign imposes restrictions like weight limits, ensuring your ambitions aren’t get too out of control. Across ten different stages, the constraints gradually become relaxed and you can stack more parts on your vehicle chassis. 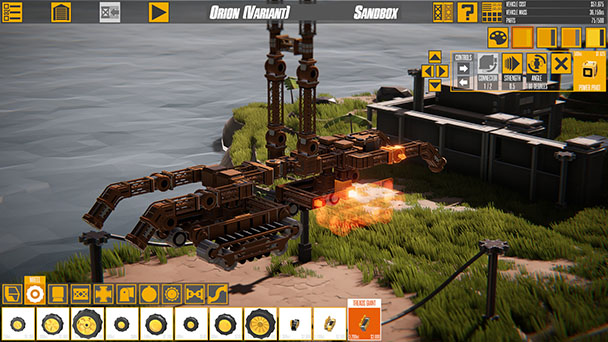 The game’s stages task you with several different challenges, from making your way to a designated spot on the map to wrecking a percentage of the environments. To make things more interesting, there are also secondary requests, which often have your persevering the ruins on the map or setting off a number of hidden explosives.

While the first few stages are fairly straightforward, things soon grow more interesting. One level requires surgical precision, as you wreck walls that are perilously close to the ruins you must protect. In that way, Instruments of Destruction echoes the artistry of real-world demolition crew, who must engineer a way to cause structure to collapse inward. 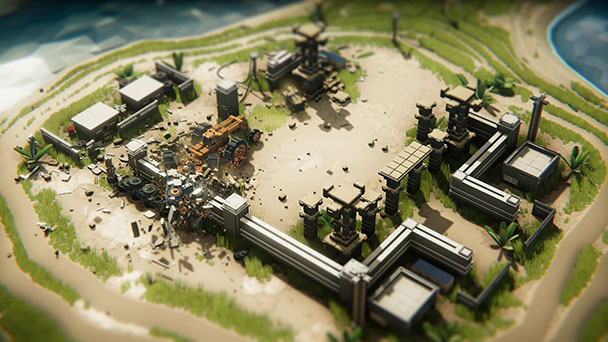 Sure, there’s not pin-point exactitude when you’re driving a tank-like boom truck outfitted with a massive crane. As such, there’s a slight sense of tension as you try to avoid a chain reaction that will thwart any hope at meeting your secondary goals. But interestingly, Instruments of Destruction favors relaxation by avoiding time limits. Because vehicles tend to get stuck in rubble and the hilly topography, a countdown timer might have fueled controller-flinging frustration. And here’s the detail most Steam reviews well tell you: Destruction is more about driving across obstruction-filled areas than it is about tearing things down. 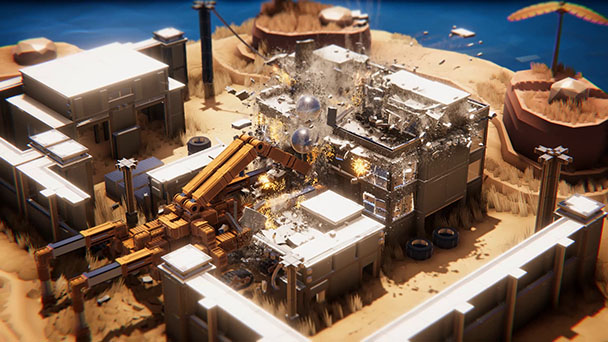 But navigating through piles of rubble and pulling your vehicle out of debris is where you’ll spend most of your time. In campaign mode, you’ll lose if you slide into the water that surrounds each stage, or land prone like a turtle in the blistering sun. As such, Destruction rewards the patient who gradually chip away at structures with the thoroughness of a hair stylish.

Instruments of Destruction’s simulation is fascinating to look at, but understandably had to be scaled down to maintain a sixty frame-per-second refresh rate on mid-range GPUs. The game’s stages are rather small, a slow-moving demolition vehicle can often traverse the land in a half minute. Hopefully, Radiangames is able to incorporate larger land-masses leading up the anticipated full release in 2023. Beyond that, additional milieu would be welcome; we’d love to wreck a large city, sending skyscrapers sideways. As it stands, Instruments of Destruction is favorite plaything, recalling the idyllic days of launching LEGO cars into sandcastles. Any game that can revisit the simple joys of childhood is probably worth checking out.

Instruments of Destruction was played on PC
with review code provided by the publisher.