We help a troubled ruler find his missing daughters in King Lucas, across a massive castle that is constantly changing shape. The jumping continues in Bucket Knight, where with pail over head and gun in hand, we go seeking treasure across a procession of precarious stages. If you’re a Switch owner who appreciates a delectable dose of indie creativity, venture on to find out more about these two economically priced titles. 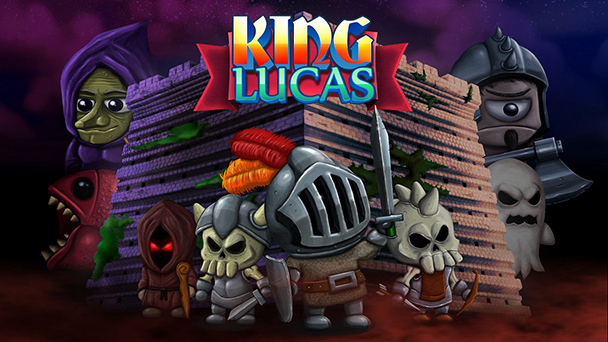 When the Queen learned of King Lucas’ liaison with the Witch of Sausan, she left him and fled to an adjacent kingdom. In her hurried departure, she left behind the couple’s daughters, which distressed the disgraced monarch. Although he’s sent in a multiple of knights into the castle where his offspring dwell, no one has returned. That’s where you come in, with King Lucas pleading for your assistance.

After creating a South Park-looking knight from selections of skin tones, brows, eyes, noses, and mouths, you’ll venture forth in an adventure that plays out like a blend of Atari 2600 classic, Pitfall! and a roguelike. With an agile jump and a basic sword, you begin the undertaking, seemingly unaware that Castle Sausan’s layout changes and grows every time you rescue a princess. Scaling to a size of over a thousand rooms, there’s something quite sinister about this stronghold. 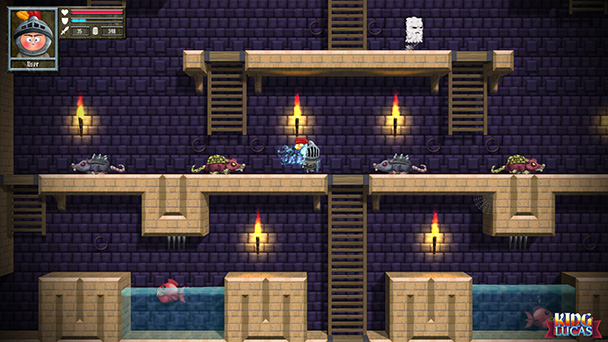 Like any respectable rogue-like, earlier hours are spend learning how to deal with the multitude of dangers. When enemies strike, they’ll wear down your shield and once that’s depleted, your health meter. But mercifully, they tend to move slowly are usually susceptible to stuns, which is convenient because you’ll have to get perilously close to foes when using your standard sword.

Fortunately, the castle’s NPC’s sell a sundry of weapons and items to assist you on your expedition. The problem with both is that they’re both expensive and expendable, forcing you to kill monsters for extra coin. While the ability to fire projectile makes combat much more enjoyable, it’s always accompanied by the nagging feeling that every shot is costing you money. 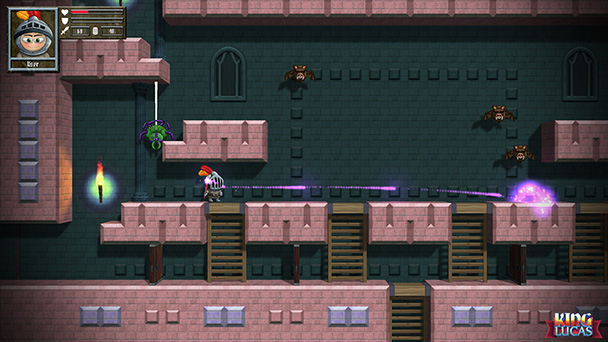 Even the local witches will peddle goods like keys that are used to open doors, health and invincibility positions, as well as a compass used to indicate the position of the next princess. Unfortunately, the life span of that device is woefully short. As such, King Lucas favors avoidance instead of aggression a bit too often. Since hit detection don’t some with the customary period on invulnerability afterward, the title comes with a few manageable, but irksome faults.

Recommended for: Players who appreciate platforming and a bit of combat across procedurally generated environments. 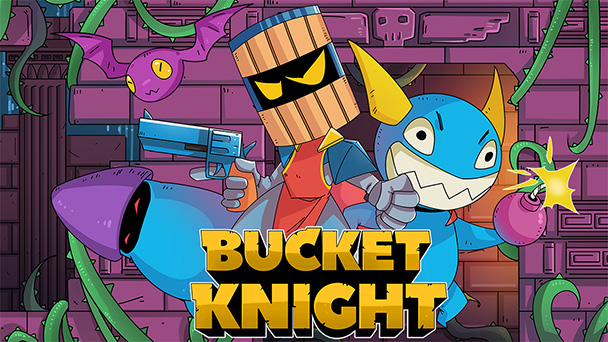 King Lucas isn’t the only one involved in a domestic dispute. The text-free introduction of Bucket Knight begins with the eponymous character plagued by the debts owed to a collector. It seems the barrel-wearing hero is behind on his alimony, loans, and taxes. As such, he figures finding the Holy Grail will put an end to the harassment, which puts Bucket Knight through twenty-four levels filled with an escalating level of difficulty.

Beyond a double jump, Bucket Knight begins his quest with a pistol capable of nominal amount of damage. Three additional weapons can be purchased to augment your offensive output. Strangely, the doesn’t pause the action when you’re buying arms from an in-game menu. Another oddity is Knight’s acute lactose intolerance. While eating fruit scattering around the level restores your health, consume a wedge of cheese and you’ll lose half your life. 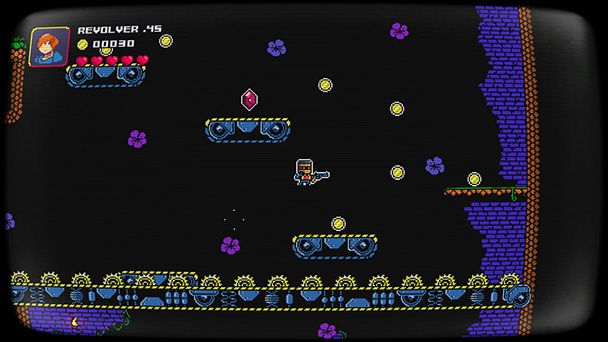 The NES-styled levels are predominantly free-scrolling, challenging players to make it to the vortex that serves an exit. Although hit detection is spotty, there’s a nice variety of foes to be found, from bats that hover aboard platforms, shotgun-toting goblins, and even bombers who race toward you, denotating their payload as they get close. In addition to maneuvering past a wealth of environmental hazards like spikes, you’ll need precision when confronting enemies.

Often, success involves repeatedly jumping over enemy bullets while sporadically releasing bullets of your own, which can be a bit like Mega Man. Occasionally, you’ll get a stage that provides a bit of diversity. The first one you’ll encounter is an auto-scrolling level where you’ll climb as quickly as possible to evade a row of deadly sawblades. 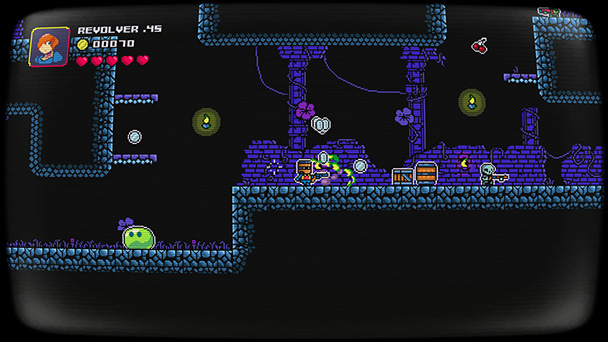 Although two dozen stages might not seem like a lot of substance, expect to learn from your mistakes. Undoubtedly, missteps are part of the learning experience, and a tap of the ‘X’ button instantly resets the current level. Visually, the game’s bit-mapped visuals offer some attractive color contrasting. Occasionally there’s an unconventional element like scaffolding that looks like a ladder but is unclimbable. There’s also the option to give the game a CRT-like output, which solidifies the retro-vibe.

Recommended for: Those who appreciate Mega Man-like mechanics in shorter, more challenging stages.