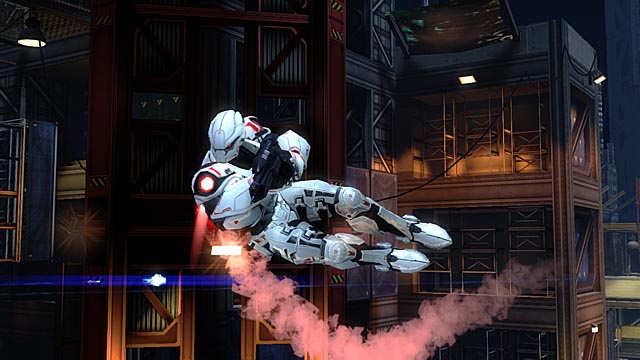 What is the concept? Far too often competitive shooters suffer from the malaise of homogeneity.  Employing traditional run and gun conventions, the genre habitually delivers faint variations on a theme instead of offering comprehensive innovation. Developer 5th Cell (Lock’s Quest, Scribblenauts) hopes to remedy shooter stagnancy with Hybrid, a downloadable Xbox 360 title which offers a single innovative mechanic that’s potent enough to separate the title from its procession of ballistic-battling peers.

Shirking unrestricted movement across the expanses of each playfield, Hybrid’s system limits players to preset stretches of cover. While this might initially sound like a drawback, the small divergence allows for a radical change in both tempo and technique as the three-on-three clashes play out.  Players use an on-screen cursor to spot locations, with a press of the “A” button automatically propelling the combatant to the locale- all the while being able to engage an encroaching enemies. Once in position, participants are offered a bit of lateral movement, the opportunity to leap to the other side of cover, blind fire, as well as peek over their defensive position to target hostiles. 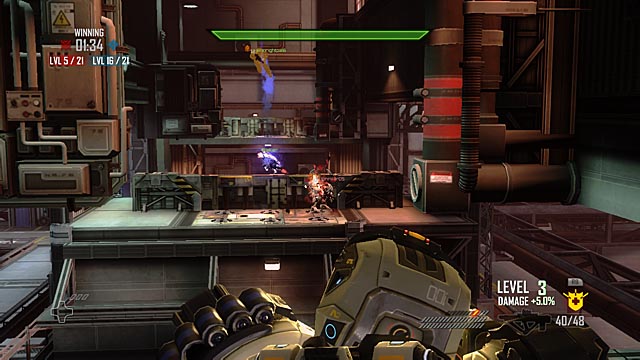 This system insures that players remain fluid, as each cover point can be assaulted from another, advantageous positions. In most shooters, it’s the player who knows every nuance of a map that will reign victorious. Yet, with Hybrid, the constrained number of control points as well as a tell-tale beacon showing enemy locations allow for novices to easily flank foes. Of course, there’s also a downside to the limited number of emplacements: although the game’s selection of ten maps present a pleasing variety of environmental motifs, there’s an undeniable uniformity of play across each locale. Whether there’s a Team Deathmatch competition in a weapons depot or a King of the Hill contest is set amidst an airfield, Hybrid’s fracases don’t feel radically different with players springing from point to point, eliminating as hostiles.

What are the game’s strengths? Beyond the core combat, Hybrid also supplies an interesting meta-game where players vie for control of regions across a world map. Echoing the territorial conquests of Risk, gamers choose either an alien or human faction, before they are prodded into capturing, maintaining, or overthrowing regions for escalating amounts of bonus experience. While it’s a promising concept and another method in which Hybrid courts players to return to the fray, there’s a scant amount of background- such as why Dark Matter is such a valued commodity and why Australia isn’t part of the conflict. As such, players have to have a bit self-motivation and imagination to derive enthusiasm from this component. 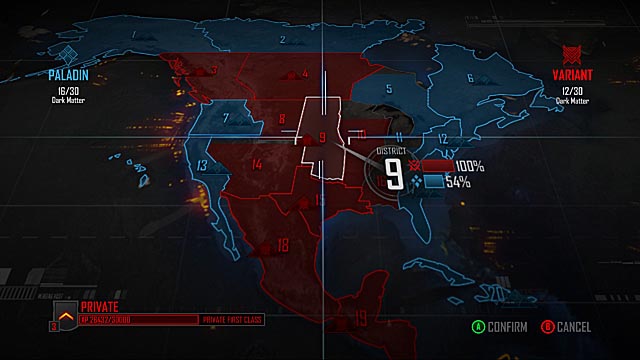 More intuitive is the title’s perk system, which rewards players with A.I. assistants after the first, third, and fifth kill. From the basic Stalker which peppers antagonist with light fire to the Preyon- a cybernetic she-devil which invokes the fury of an over-caffeinated Call of Duty player with her furious knife assault, the game’s bot help offset the three-player per side restriction.

Gratifyingly, the game’s aesthetics are consistently capable, with a spotless sixty frame-per-second output and an effective cacophony of weapon fire, explosions, and the tell-tale cry of an approaching Preyon. Hybrid’s arsenal of destruction is dependably rewarding, with punchy shotguns capable of decimating nearby foes and machine guns which unleash a load of lead into downrange opponents. Beyond a single offensive weapon, players also choose two extra abilities- from devastating grenades to temporary boosts which can augment a combat’s defenses or even increase the amount of XP earned in each match. 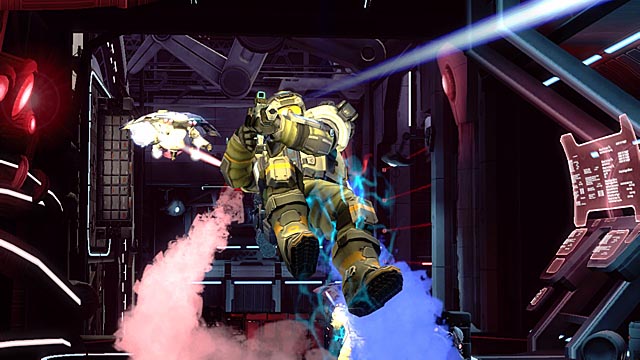 What are the game’s weaknesses? Although Hybrid comes with a practice arena outfitted with dim-witted drones, the game lacks any type of engaging single player element. Given the game’s engaging mechanics, it would have been enjoyable to tackle bots, or have the title’s backstory conveyed through a short campaign. Considering the day-one launch woes which effectively made the game unplayable, some sort of offline component would help lessen the blow when Hybrid’s servers do dark. Currently, the game’s match-making and load times are woefully sluggish, this pauses of up to two minutes before entering a bout.

For traditionalists, the game’s proposal to bypass combat and earn exotic weapons and skills by spending Microsoft Points will seem dubious. Although the unlockable arms and aptitudes don’t give players a discernible advantage, these kinds of shortcuts seem more fitting in a free-to-play environment than a premium-priced downloadable title. 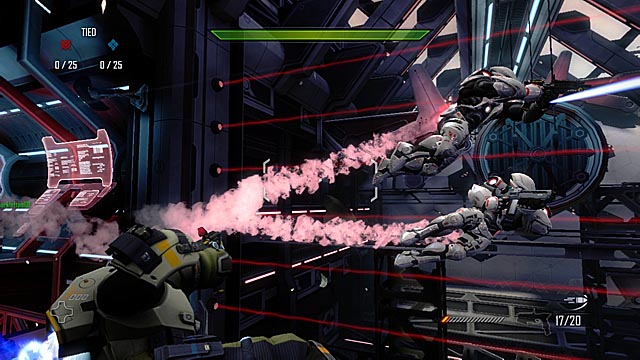 Is it worth the money? By providing engrossing, accessible combat at a slick-smooth refresh rate, Hybrid certainly deserves the attention of action-game aficionados. Those fatigued by the formulaic fights offered by scores of military shooters should appreciate the title’s interpretation of combat, at least in the short term. A longer affair with Hybrid is dependent on the player’s interest in its meta-game and by the collection of a multitude of unlockables. Much like Super Scribblenauts offered a revision which significantly advanced 5th Cells’ creative ambitions, it would be great if the developer had a second chance, and allow Hybrid to build on its array of strengths.

Previous: New Releases for the Week of August 12th, 2012
Next: Sleeping Dogs Review