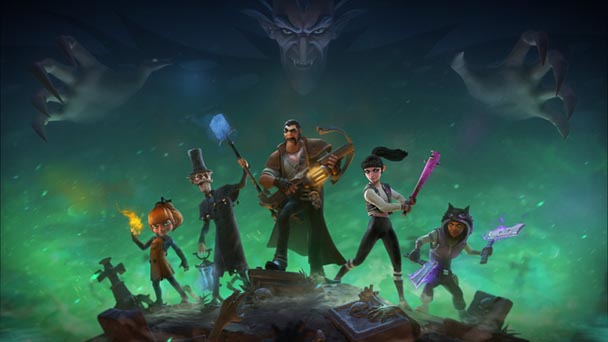 In tower defense games, survival hinges on the ability to adapt to a tenacious threat. Defeat is an inevitability that can only be deferred. In some ways, the genre faces a similar predicament, with stagnancy playing the role of an ever-obstinate opponent. To fight this menace, developers has strove to introduce variation in tower defense titles, often attempting to integrate mechanics from other types of games.

For the Early Access release of Hero Defense – Haunted Island developer Happy Tuesday replaces the traditional turrets with a quintet of spirited characters able to scurry across the battlefield. The decision to utilize a reduced defensive force means that the title focuses on skill-trees and augmentation to tackle its resolute invaders. In its current state, the design choice demonstrates potential, but only if Haunted Island can embed a bit more variability into its stages. As it stands, players will probably rely on a specific strategy to surmount Hero Defense. 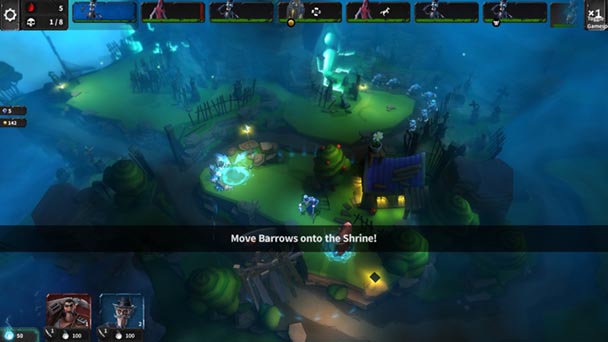 Certainly, the title’s heroes are likeable, each drawing on a different ability to stop the flow of assailants. At first, players only have access to Jack, who with his study build and colossal crossbow, is an obvious caricature of Abraham Van Helsing. Play through the game’s interactive tutorial and you’ll be soon be joined by Barrow, a priest with a large attack range who’s adept an assaulting the undead. Next comes Sam Hain, a freckled girl whose propensities for pyromania provide a hard-hitting area of effect assault. Jane Doe is the game’s sole melee-based character; her ability set allows her to leap down into the offensive lanes and deliver the hurt make her a crucial member. Finally, there’s Wydle, who with the developer latest patch is a powerhouse against werewolves.

Each character is rendered with a cartoonish style, echoing the tenor of a Tim Burton film. As I was playing, I couldn’t help but imagine a tower defense game that parodied Disneyland’s Haunted Mansion ride, where ghoulish inhabitants came to life in an effort to scare a procession of unsuspecting people. While Hero Defense isn’t that imaginative, the plot does offer well-voice banter between protagonists, as they team up to take down the game’s nemesis, Count Necrosis. About an hour in you’ll unlock the game’s Town Hall, which contains an in-game library that provides additional biographical detail on characters and creatures. 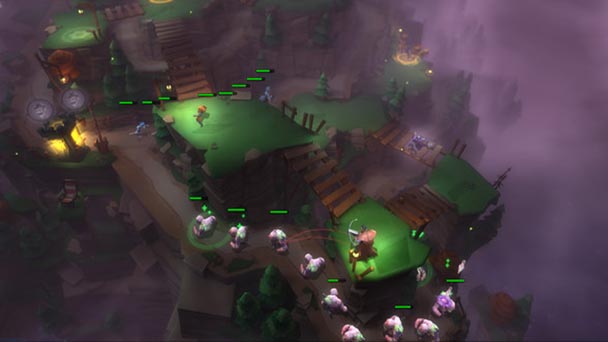 Visually, the game is accomplished, with well- detailed characters and backdrops all drawn in the type of rich hues which suggest a spooky vibe. Currently, the assets are all attractive and animate pleasing, allowing the game’s camera system still needs a bit of work. Right now, either mouse movement with two button depressed or pushing on the boundaries of the battlefield scrolls the screen around a fixed path that simultaneously rotates the perspective. Largely, it’s unwieldy as it sounds. Another disappointment is the ability to zoom on in Haunted Island characters. Happy Tuesday’s designers went to a lot of work constructing the heroes; it’s a shame players can’t view them in more detail.

Visual blemishes asides, right now the gratification of gameplay is Hero Defense’s most pressing issue. Each stage in the game’s campaign feels somewhat homogenous, with each stage tasking players with the placement as many characters as an allotment of blue orb allows. Defeating the game’s baddies rewards players with additional orbs, which can be used to either summon additional heroes or provide a single-stage charge that increases the amount of damage you can inflict. While there’s elemental weaknesses, tech-trees that offer permanent upgrades, and the consumable items, you’ll rarely face a thorny decision. Instead, Haunted Island’s campaign saunters at a leisurely pace, and like many of its undead antagonists, follows a linear trajectory. 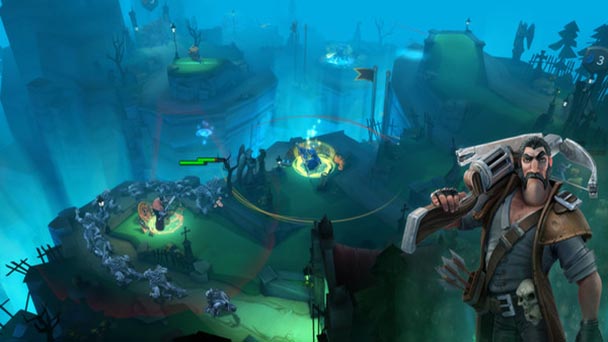 The ability to move your heroes doesn’t offer many testing tactical decisions. If there’s a buff shrine on the map to increase damage or attack range, you’d be a fool not to use it. If there’s a group of foes with a particular resistance, soften them up with the appropriate hero before allowing your heavy hitters to extinguish their health bar, which again is common sense. Then there’s the occasional impasse, reached when the resilience monsters outweigh the damage capabilities of your team. The solution? Take a trip to each character’s tech tree investing everything you own. It doesn’t really matter what you buy, though. On lower difficulty settings, I tried both diversifying and specializing, and the outcome was largely the same.

That’s not to say there’s fun to be found in upgrading your party. Seeing Jack launch a quartet of bolts into lurching zombies is thoroughly enjoyable, as is witnessing Barrow drench the undead with torrents of holy water. But leveling up these abilities can feel grindy, given the game’s pace of advancement. On the upside, Happy Tuesday has shown a commitment to improvement, watching play sessions of streamers and making appropriate changes. Another high point on the horizon is the imminent addition of a multiplayer, cooperative component, which should bolster the game’s MOBA-esque qualities. 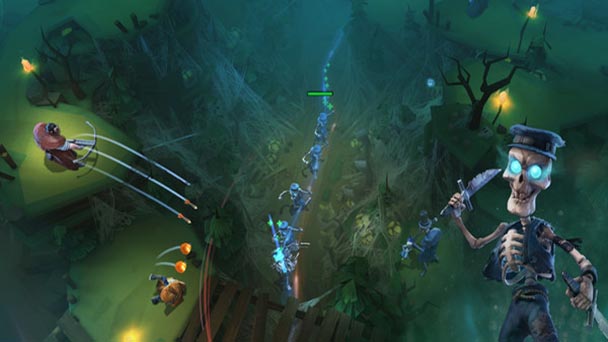 Given the game’s $14.99 USD early access price and balancing issues, making a pilgrimage to Haunted Island might be recommended to hardcore tower defense addicts willing to sacrifice strategy. That’s not to rule the title out, because once multiplayer integrated and some nuance is worked in, Hero Defense has a strong possible of carrying the tower defense torch.

Hero Defense – Haunted Island was played on the PC with preview code provided by the publisher.