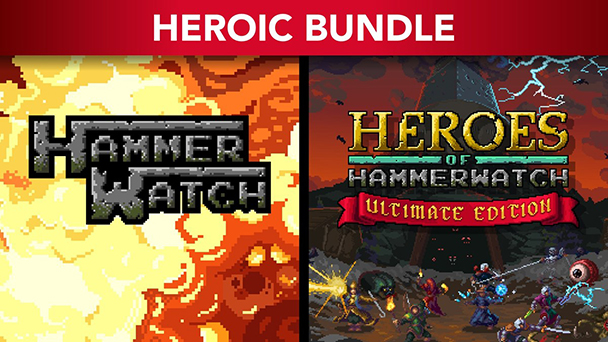 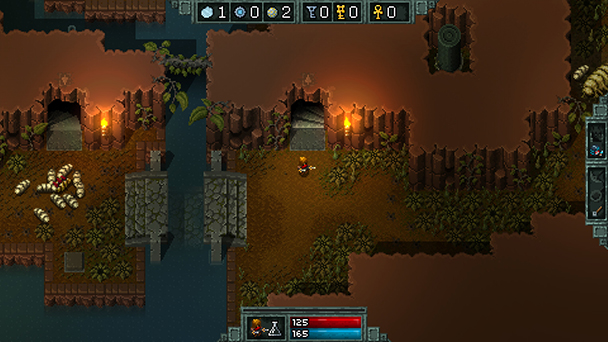 Cooperative gaming is commonplace, thanks to games like 1985’s Gauntlet. Both the Atari arcade game and many of its home console adaptations functioned as a spirited single-player experience. But when a few friends joined in, the enjoyment grew exponentially. Here, teams worked together to defeat a legion on monsters and the lairs that would tenaciously respawn them as they navigated through labyrinthine levels.  Much of the gratification stemmed from steadily thinning the numbers of the myriad of enemies that would habitually fill each hallway.

While modern dungeon crawls like the Diablo series still incorporate the mechanic, all too often the focus is on loot acquisition, undermining the fulfilment of thinning out hallways overflowing with antagonistic hordes. Released in 2013 on PCs, Crackshell’s Hammerwatch reverted to the simplicity of Gauntlet’s straightforward dungeon-crawls, permitting parties of four to clean adversity from each alcove. 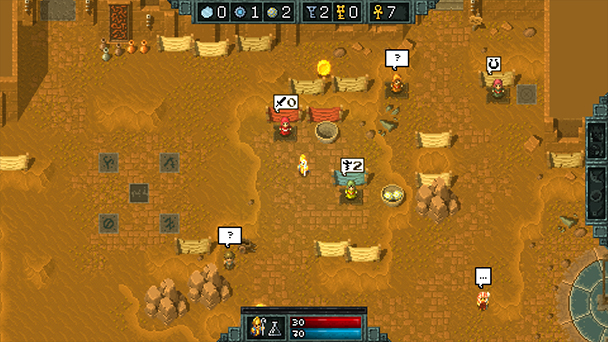 Much like the Ed Logg’s classic coin-op, Hammerwatch permits players to select from a variety of seven distinct classes. Individualists or those seeking an easier level of challenge should opt for the Ranger or Sorcerer. Armed with either a bow or staff, both characters excel at defeating opponents before they come too close. The Wizard and Priest also extend ranged attacks, but they sacrifice distance for an area-of-effect attack. For those seeking more of a challenge, Hammerwatch supplies several melee-based members, from a Paladin, Warlock, to Thief. While make tackling crowds more difficult, each has an exceptionally powerful secondary that helps to create a sense of balance.

For some, Hammerwatch sense of progression might be a bit too plodding, with high prices attached to the acquisition of new skills. Initially, characters are offering a combo multiplier, which kicks in after defeating ten or more enemies in rapid succession. At first, this increases your damage output, but later you’ll be able to automatically trigger other perks, like gradually replacing any lost hit points when the multiplier is active. Unsurprisingly, store fronts scattered around the levels offer benefits like raising your health cap or quickening the refill speed for your Mana gauge- which is expended when triggering your secondary abilities. 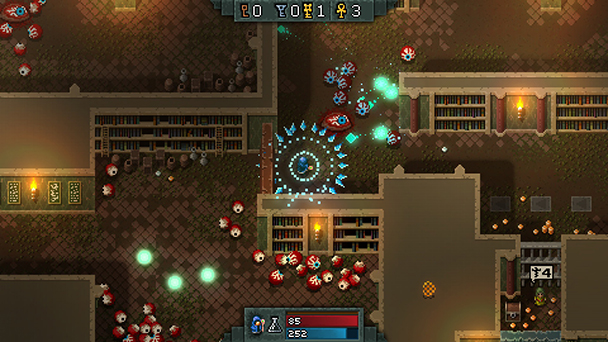 Moving away from the procedurally-generated stages of most dungeon crawls, Hammerwatch’s floors are filled with switches and simple puzzles. And while it’s easy to get lost in some of the voluminous spaces, an overlay map is just a button press away. The decision for pre-made stages provides to be prudent, allowing for the occasional passage that can funnel with foes, or the glance of a currency-filled area that seems just out direct reach, stirring exploration. The selection of creatures is just as adept, with monster form mutating as you delve deeper. Pleasingly, the game telegraphs danger proficiently, tasking players with noticing cavities in the ground, or signaling damage radius for a falling stalactite. Boss battles are significantly tougher than standard foes, and while they are challenging, they rarely feel unfair.

While the inclusion of user-generated stages didn’t make it into the Xbox version of Hammerwatch, the definitive edition does offer supplementary material. Beyond the “Castle Hammerwatch” campaign, the title also includes a separate “Temple of the Sun” adventure, as well as Survival and Hero Defense modes, providing a healthy amount of substance. Pleasingly, the game also extends an agreeable number of modifiers, with non-compulsory options like removing mana regeneration and HP regeneration. The game’s problems are few, but many will wish you could use a your secondary ability without having to pause your character’s movement. 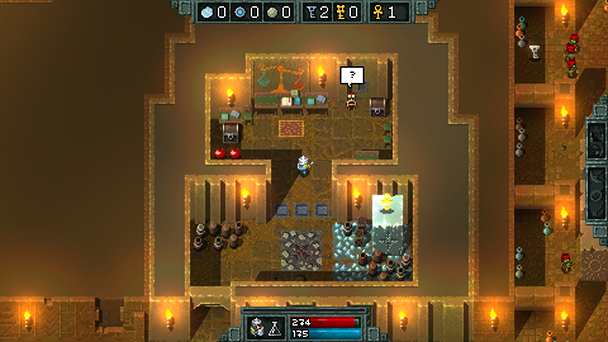 These inclusions make Hammerwatch a commendable adaption of the PC title. While the game is exponentially better with friends, even individuals who appreciate old-fashioned, overhead dungeon crawls should have a lot of fun with the title. 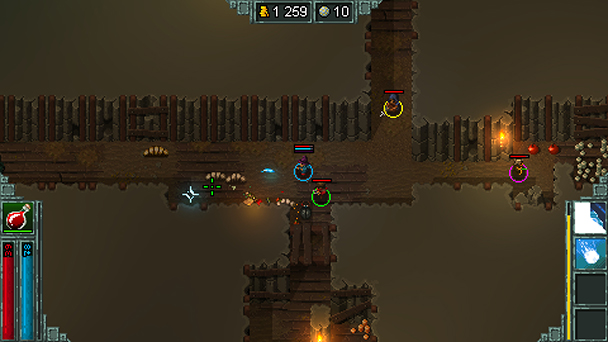 Hammerwatch is a stimulating test of the synergy of your adventuring party, or a consummate test if you venture solo. Stick with it and you’d eventually conquer each area, as you memorize the level design.

With Heroes of Hammerwatch, that strategy is now obsolete. Using procedurally-generated levels, the sequel hews closer to a roguelike, which offers a number of upsides. The most substantial benefit is the sense of motivation spurred by a system of persistent progression. The beginning of the game drops players in a near-abandoned mining town named Outlook, where you’ll assist ten of the surviving citizens build up the city back up. 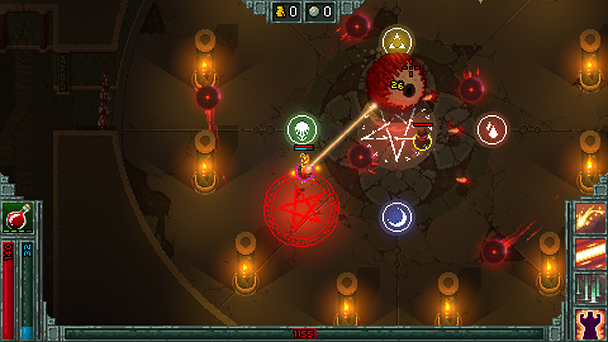 Fortunately, your motivation isn’t entirely altruistic. In turn, the folk vend opportunities for growth, creating a rather compelling gameplay cycle. Whether it’s the exploratory essentials sold by Darren the Supplier or forging a fountain that can invoke positive effects, there’s an ample number of projects to be pursued. But be warned that progress can be painfully slow at first. But stick with Heroes and the pace will pick up, allowing you to purchase that coveted companion.

Unsurprisingly, the only way to finance these efforts in by risking your life gathering materials in the local mine. Collection involves two perilous hazards, Hammerwatch’s roving assortment of creatures and environmental traps like jutting floor spikes and walls that emit a nonstop succession of darts. 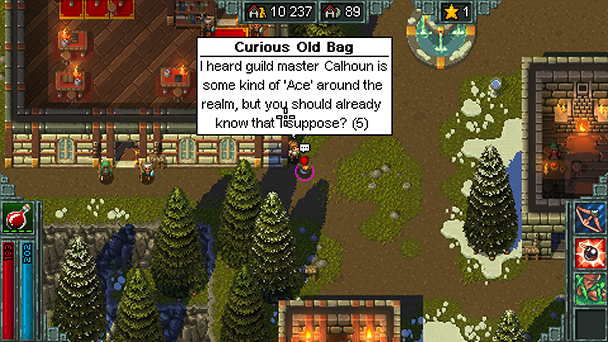 The first require an array of strategies to deal with, since each type of foe behaves differently. The latter tend to safeguard abundant amounts of coins, ore, and gemstones, but pleasingly, levels habitually permit prudent players to circumvent these dangers. Pleasing, there’s a variety of milieu on hand, from dungeons and prisons carved from stone, arid deserts, and even gladiatorial arenas, each with their own assemblage of adversaries.

Each level in the mine offers another intriguing risk/reward situation. Make your way to a mineral elevator and you can drop all your collected goods back to town for safekeeping, albeit at an excessive tax rate. Venture upward with materials in store and you might be able to secure a better deal, but you risk dying and losing everything. Pleasingly, the game’s low-fi visuals permit Heroes of Hammerwatch to run at a rock-solid framerate, even when a throng of giant grubs are making a beeline for your position. 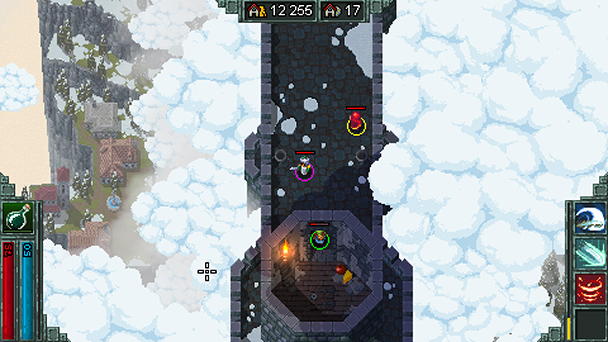 Pleasingly Heroes of Hammerwatch’s control scheme means you’re a powerful opponent. The left stick moves your character, while the right rotates a line that represents your aiming direction. Although the visual indicator might not be too useful for melee-based characters like the paladin or warlock, it permits pinpoint accuracy for rangers or the witch hunter, one of the game’s four new playables. Undoubtedly, there’s something quite gratifying about alerting a horde or enemies and gunning down the whole, projectile-launching bunch.

Play with up to a trio of online assistants and Heroes of Hammerwatch becomes a slightly different experience. While adversity is diminished by the potency of additional adventurers, you’ll still have to act like an interconnected team. With a paladin acting as a tank, and a priest performing regular healing, an online game pushed players into familiar roles that everyone seemed happy to obey. 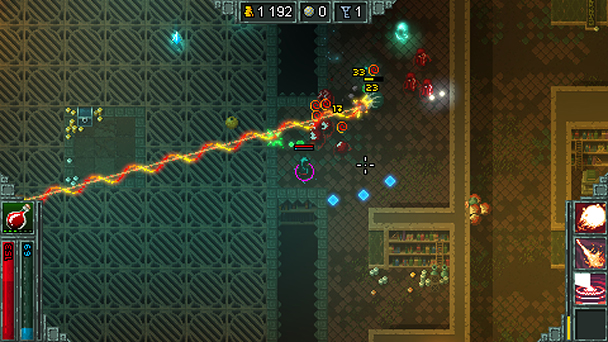 Death and the Forfeiture of Material Wealth

Inevitably, death will find your hero. And when it does, you’ll lose any wealth that you didn’t send back to town. Mercifully, upgrades to your character and to the town persist, providing the opportunity for each run to be slightly more productive. Perks available from Outlook’s upgrades and well as leveling up your adventurer contributes opportunities for augmentation. But expectedly, the resilience of your adversaries increases as well, diminished the benefits of grinding.

Much like the definitive edition of Hammerwatch, the sequel brings its own appendages to the bundle. Bundling the base game along with the “Pyramid of Prophecy” and “Moon Temple” campaign, the package offers a wealth of explorational enjoyment. If you’re looking for an Xbox title that captures the delight of Gauntlet or early Diablo games, Hammerwatch: Heroic Bundle is currently your best bet.

Hammerwatch: Heroic Bundle was played on the
Xbox Series X with review code provided by the publisher.

Hammerwatch: Heroic Bundle review
Hammerwatch: Heroic Bundle delivers two fiendishly fun twin-stick dungeon crawls for a frugal price. Hammerwatch Cooperative gaming is commonplace, thanks to games like 1985&rsquo;s Gauntlet. Both the Atari arcade game and many of its home console adaptations functioned as a spirited single-player experience. But when a few friends joined in, the enjoyment grew exponentially. Here, teams worked together to defeat a legion on monsters and the lairs that would tenaciously respawn them as&hellip;